5:45am, Saturday morning. The graffiti-covered roller door at the back of the fruit shop opens and Azzi steps out into Enmore Lane. Some stars are still visible in the cloudless indigo sky and the frigid dawn air is still. “Beautiful morning,” Azzi says.

Azzi – who lives with Aida, his wife, above the fruit shop – stands a little over five feet. He has grey hair and brown eyes that are as warm as a campfire. A royal purple polo shirt that’s at least two sizes too large for his short, skinny body is tucked into dark grey trousers.

He walks down the alley to his old flatbed truck and climbs into the dusty cabin that’s full of rolled tarpaulins. Before setting out on the short drive west to Paddy’s Markets, he crosses himself and whispers a prayer.

The markets are already busy when the truck bounces in. The only truck space not occupied is blocked by two empty palettes. A young forklift driver removes them the moment he sees Azzi arrive. Azzi smiles. “All the time he save room for me,” he tells me. “He’s good people.” 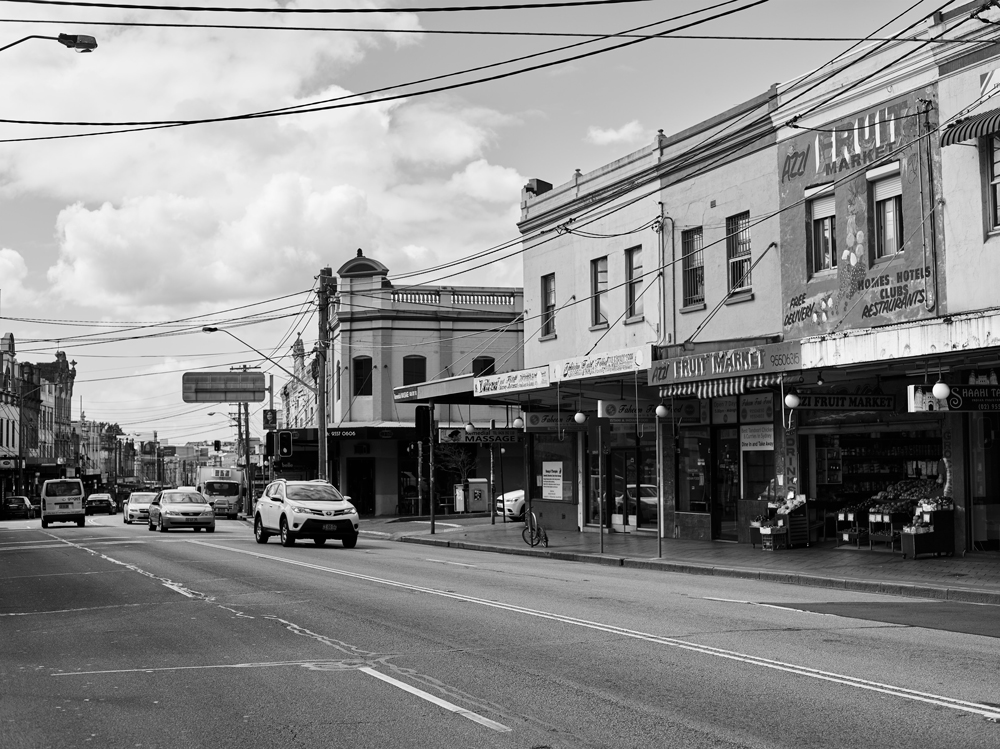 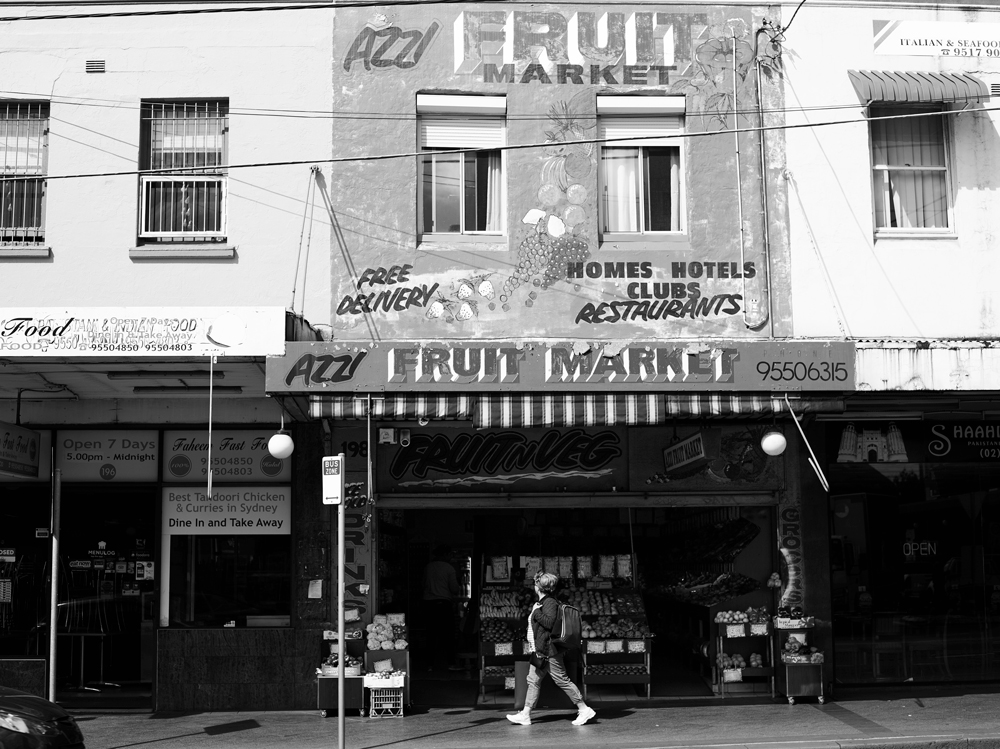 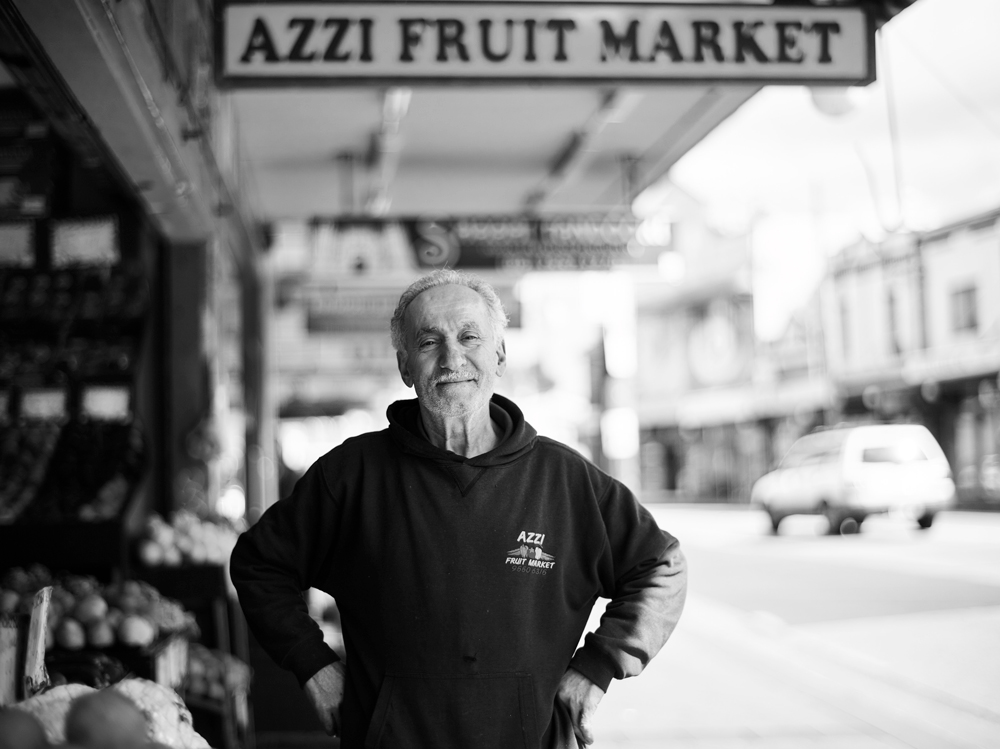 You could say the same of Azzi.

Born in Lebanon in 1950, Azzi and his family arrived as refugees in Australia in 1990. For fifteen years prior, they had lived amidst the horror of the Lebanese Civil War between Christians and Muslims. “It was very hard life, you know,” Azzi told me. “Very, very hard life. I can’t say much because it’s hard. Three times I moved with my family, always running from war, war, war.”

One of the worst instances Azzi remembers was when he was forced to swim for several hours in search of a boatman – any boatman – who would help rescue his family after their town was engulfed in fighting and all land-based routes of escape were either destroyed or too dangerous. “If I didn’t, we probably all would have died at that time.”

Azzi worked as a chemist in Lebanon. However, while he was bilingual in Lebanese and French,  his limited English upon arriving in Australia made finding similar employment virtually impossible. With the help of his brother who had moved here several decades earlier, Azzi and Aida opened the shop in Enmore less than a year after arriving, to support themselves and their four children. “When I started it was hard,” Azzi recalls. “Nobody in the area knew me and everybody at the market would give me a bad price. I had to run around like a dog.”

Little about the shop has changed since it first opened – least of all the peeling lime-green facade with its cartoonish images of fruit and vegetables. Azzi, however, no longer has to run around like a dog. He still works everyday except Sunday but not the twelve plus hours per day he used to; Ronnie, one of his sons, is now responsible for the bulk of the duties at the shop. Azzi, though, has no immediate plans to fully retire. “I will someday,” he says. “But I’ll help Ronnie while I still can.”

While he is hardworking, Azzi isn’t greedy and always rounds down the cost of his customers’ groceries to a neat figure, saying, “Just ten is fine” or “Just twenty is fine.” He also regularly gifts customers over-the-counter pearls of wisdom. One time, as he tallied what was in my basket, he told me, “Some people are never happy, you know. They’re looking always for money, money, money and better job, better car, better house, prettier woman. I’m not going to tell them how to live right but I don’t get it.” Another time he told me, “Man, it’s simple, you know. All you’ve got to do is treat the people right. Don’t scam them. Treat them honest.”

What are the chances of hearing that at the checkout at Coles or Woolworths? 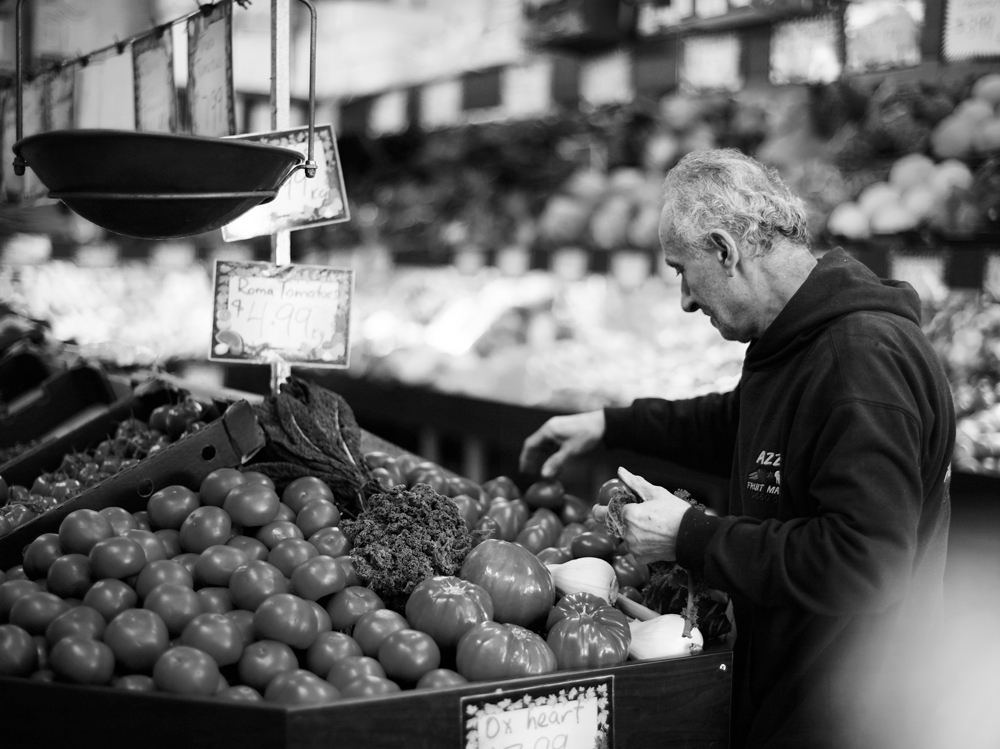 Azzi moves through Paddy’s Market at speed, dodging and weaving through the crowd like a man a quarter of his age. A folded exercise book containing the day’s orders sticks out of his back pocket. Several vendors shout out happily when they see him.

Azzi buys coffee for three vendors he is good friends with. They sit together for a few minutes, Azzi clandestinely smoking a cigarette while keeping an eye out for security. “He’s been coming here for twenty years and every week buys us all a coffee,” one of the vendors says of Azzi. “He’s a gentleman. An absolute gentleman.”

Two forklift drivers load the boxes of fruit and vegetables onto the back of Azzi’s truck. Azzi grabs the tarpaulins from the truck’s cabin and tosses them over the load. He swiftly secures them with rope, as he has done thousands of times before, then hurries off to buy a round of coffees for the forklift drivers. Azzi then bids farewell and climbs into the truck to drive back to the shop. On the way he reminisces about his homeland.

“Lebanon is very good country, man,” he says. “Very, very good country. In my village everyone was happy, everyone was friendly, Christians and Muslims. But now there is war everywhere in the Middle East. I don’t know what happened, man. The gods put peace in the world and now there is war. There was war for fifteen years in my country. My village, my church, my home – all was destroyed, you know. My house is still ruined.

“Maybe I will go back someday and build again but I’m waiting to see what happens in Syria, Yemen, Iraq, Jordan and Lebanon. When the war finishes everywhere, when the peace falls on the Middle East, then I will go back. But if there is still war, man, no way – I don’t want to do anything. I’m happy here, thank God.”

Vulpine Menace A Letter from London
by Will Self
Will Self finds himself in a London invaded by foxes during the UK elections.
Full Article
Issues

Warm and Fuzzy Cops A Letter from New York
by Ian Keldoulis
For years, the NYPD reached out to the community by stopping and frisking them. Now they are embracing a whole new tactic, listening and talking.
Full Article
Issues
Correspondence