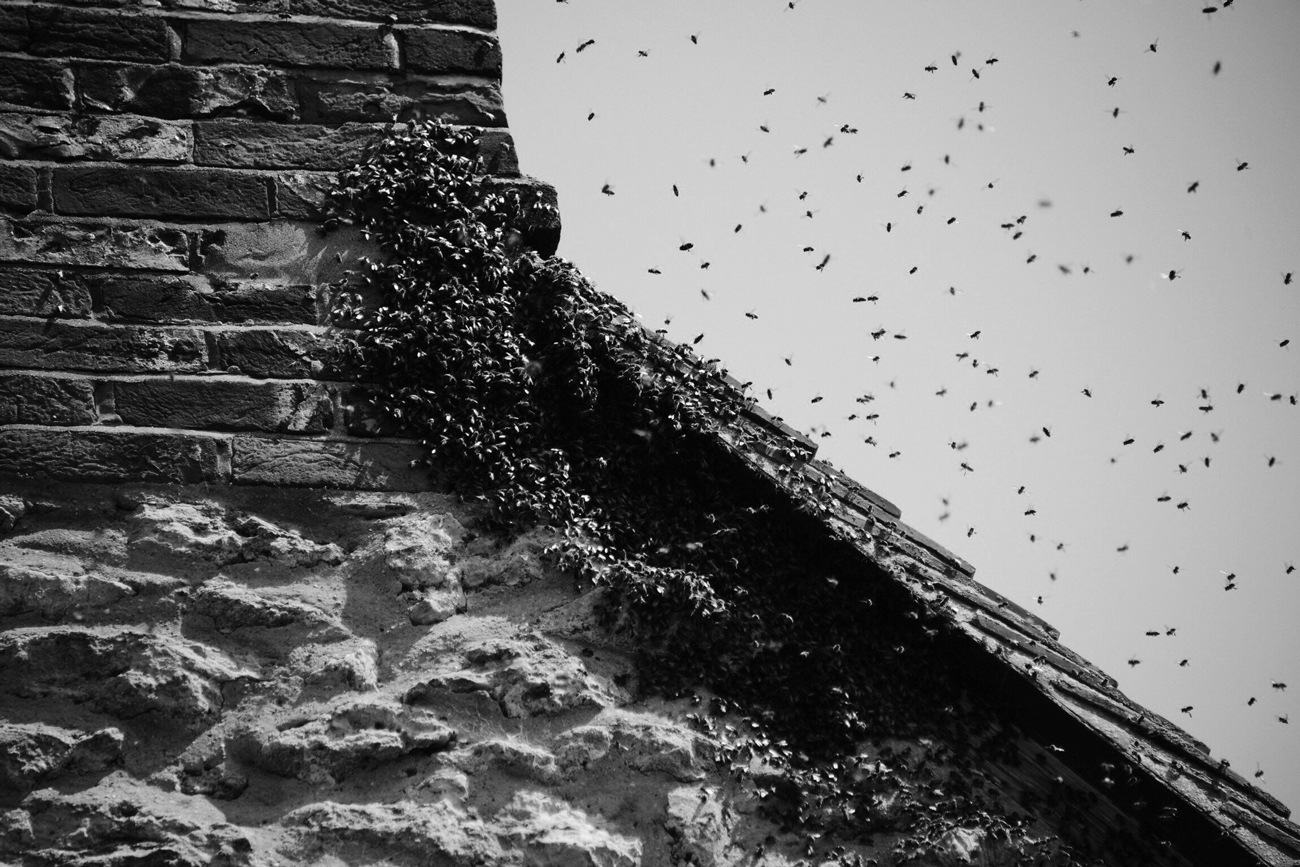 On the lookout for a secure location close to a food supply, two successive swarms of honey bees have made their home in our upstairs bedroom wall. We have learnt extraordinary things about their habits and cycle of search, colonisation, hive building and decease; how they can sniff out a past hive, sacrifice some of the swarm to mop up poison, and secure the site to build anew. Once they are gone, obliging wax moths move in to feed on their hive and breed grubs which creep out from the sill and disrupt stories at bedtime.

After numerous treatments we gradually learnt to live with a slow honey seep through the floor in an inconspicuous place. But when the cold weather came and we could no longer close the kitchen window because it was too gummed up with honey, it was the last straw. Pest controller and passionate beekeeper, Wally, came to investigate, waxing with enthusiasm about their life and style.

Somewhat reminiscent of one of the Ghostbusters in his monogrammed bomber jacket, he used a thermal imaging tool to locate the remains of the colonies by the small difference in temperature they created across the wall. “They are beautiful creatures,” he said. Then (thinking like a bee) as he looked out the window at a riot of tallowwood gum blossom: “There’s so much food, no wonder they liked it here!”

Now the weep holes where the light and the bees got in are sealed.

Most people have not heard of this phenomenon, but a quick search yields extraordinary images of poltergeist-like curtains of honey slowly falling from uncovered ceilings and machinic black folds of comb packed efficiently into secret spaces. A builder told me he had salvaged six kilograms of honey from a ceiling he was working on. “It was delicious!”

One elderly gent surrendered an entire room in his home to the bees, but the family called Wally the pest controller when their grandfather had to vacate. The swarm was rescued with a vacuum and happily rehomed in a custom-built hive.

I can’t help feeling there’s an analogy here about the invention and sagacity of the homeless, always on the lookout for a safe hide that’s close to resources, leading a contingent life until they are spotted and relocated or water-cannoned outta there.

If you find a swarm of ‘feral’ honey bees or native bees has taken up occupancy in your home, you can engage a service to capture and re-house them, including Beekeeper Sydney, and The Urban Beehive. By doing this you would be helping to conserve populations under threat by building resistance to the menace of the Varroa destructor mite from which Australia is still (but only just) free.

In 2015 the NSW Department of Primary Industries reported that honey bees contribute an estimated $36 million to the state economy each year, while pollination services that underpin agricultural productivity are worth an estimated $4-6 billion per year. Native stingless bees are important in pollination and a promising alternative to the heavy reliance on honey bees by agriculture. So-called ‘wild pollinators’ are used to pollinate diverse crops, from Queensland to Griffith.

A new network of bee and pollination specialists convened by researcher Dr Megan Halcroft in 2016 is “thinking like a hive” to share knowledge from science and the extensive ‘grey literature’ available from non-academic and community sources. The aim is to develop strategies to strengthen bee populations and deploy native bees more widely. “Beekeeping is a well-organised field of recreational and commercial practitioners with a high community interest,” says Dr Halcroft, “and as such has access to a trove of valuable knowledge from which to generate solutions.”

Chris King of Dulwich Hill, who has kept native bees for a number of years, says they make great pets: “They don’t sting and they don’t have to be fed and they can entertain you. They cluster at their door in the morning ready to forage when it gets to 19 degrees, then they are coming and going from the hive through the day in their hundreds.”

Interestingly, native bees can be social or ‘solitary’. For the loners, homes are more difficult to find, and so people with space are encouraged to build or host an apartment-like ‘bee hotel’ structure. We know there is a blind spot to the diversity of human need for secure shelter and housing – and novel exemplars may be closer to hand than we thought. 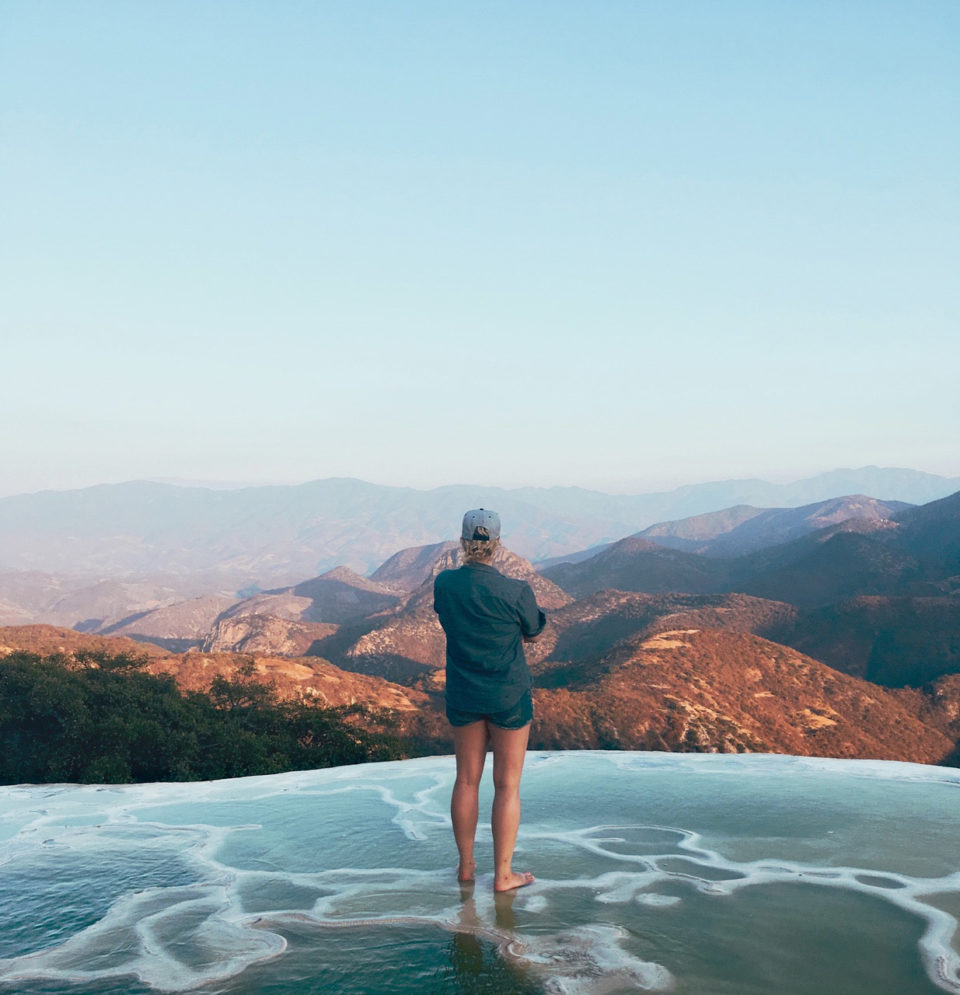 In Oaxaca A Letter From Mexico
by Elmo Keep
By the time I got to Mexico I had been dead for quite some time.
Full Article
Issues
Correspondence

Creating a City That Never Sleeps Sydney needs a ‘night mayor’, not lockout laws, to guide its future
by Clint Caward
If the people that do work in the night economy – taxi drivers, waiters, chefs, DJs, promoters – are the best placed to understand it, is it time they had their own voice?
Full Article
X