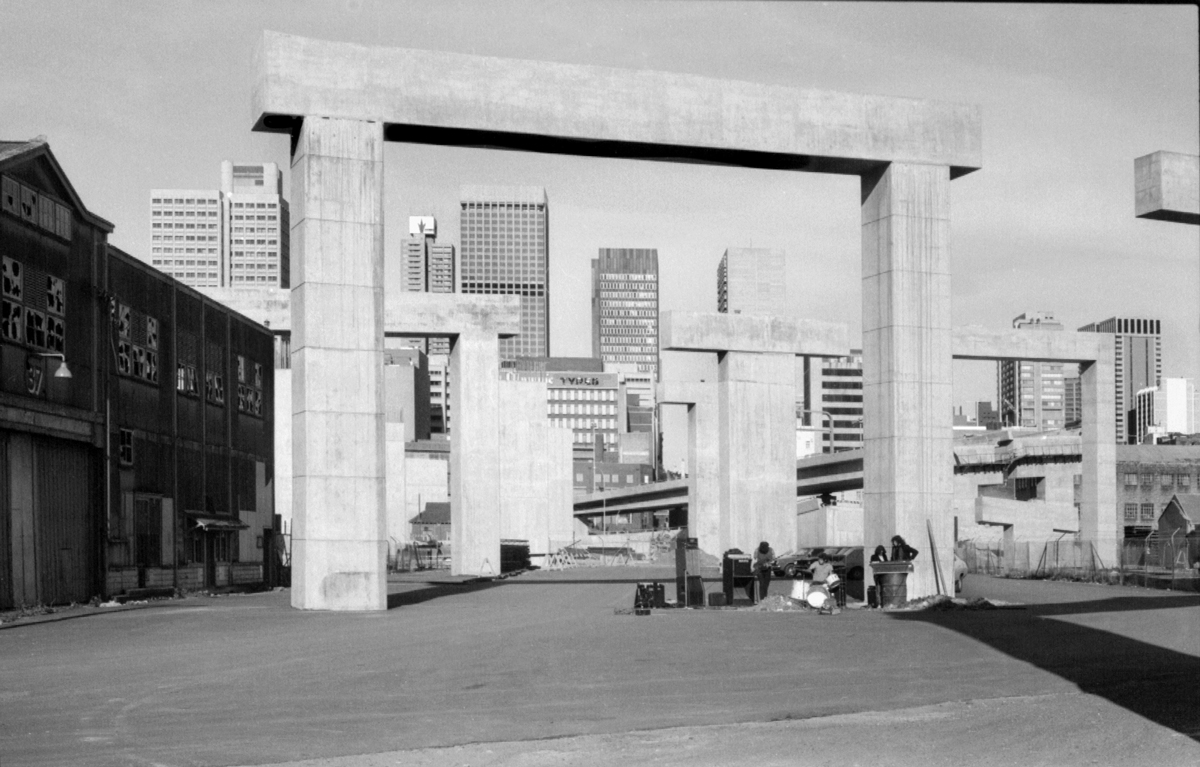 “We had been born walled out from art, had never guessed it might exist, and then we saw what had been kept from us.” – Peter Carey, Theft

Hard-to-find tracks from notable Sydney post-punk band, newly anthologised by Spanish label Guerrsen; scything guitars, sputtering synths and strident vocals fall forward in fitful motion, propelled with desperate urgency as if they’d tripped running down the stairs. The striking image of Voigt/465’s guerrilla performance at the Darling Harbour building site is probably better known than their slim but singular discography. Photographer Peter Nelson tells me that “construction had stalled, there were long periods of inactivity, just these half-built monoliths in a still quiet place. It was remarkably easy to break into. Saturday arvo. No security cameras, we managed to get our cars in. Some kind of security did turn up eventually (not the police).” Dwarfed by the concrete pylons of the Western Distributor rising up around the band like megalithic stone circles, past disruptively meeting future just like Voigt’s music. Wallaby Beat is a semi-retired blog that, in the words of founders Luke and Henry, “focused on Australian records from 1976 to 1984 made by (musicians) who found self-promotion too distasteful or difficult and therefore their records sank without trace”. With a proclivity for DIY outsiders with scuzzy charisma, their website featured tracks you’d never heard of by acts you loved but mostly songs you loved by bands you’d never heard of. Unafraid to offer its flickering spotlight to bogans, comedians and nutjobs, eventually Wallaby Beat became a label too, reissuing some of the most compelling oddities they’d unearthed (the Ulsers, Screaming Abdabs, City Ram Waddy) as the blog itself wound down. But Luke and Henry have returned as guests hosting the Maximum Rock & Roll Remote Radio show. This clamorous hour of ranting and humour is a fulsome survey of the Wallaby Beat shtick, guaranteed to leave you wondering just where the hell they find this stuff.

Why is The Monkees’ July 1967 US tour notorious for being one of the most famous mismatches in entertainment history? It’s because they personally asked The Jimi Hendrix Experience to be their support act, only to reluctantly revoke the offer when children started crying and parents complained. Less well-known is that singer Lynne Randell, a Liverpool-born dynamo raised in Melbourne, was also on the bill, getting rave notices and making headlines dating Davy ‘Daydream Believer’ Jones. Randell’s life story is biopic-ready: as well as her pop success, she wrote for Go-Set as their US correspondent, moved in the same circles as Led Zeppelin, eventually becoming personal assistant to Molly Meldrum and later Sire’s Seymour Stein. But she struggled with a long-term addiction to methamphetamine-based diet pills and died much too young, ten years ago last month. Let’s remember her for exuberant pop songs like ‘Stranger in My Arms’ or ‘That’s a Hoe Down’, which both turn 50 this year, renowned as classic dancefloor fillers on the UK Northern Soul scene if less feted at home. Radio Birdman are back and busy with a national tour and essential documentary but don’t forget singer Rob Younger and bassist Jim Dickson’s other outfit, The New Christs, as they celebrate a 30th anniversary and play a Sydney show this month. Younger regrouped The New Christs in 1987 after three years focusing mainly on his production work (notably for Citadel Records), reining in Dickson for the first time as well as then-guitarist Charlie Owen. In July ’87 this new line-up released the blistering single ‘The Black Hole’, followed by ‘Dropping Like Flies’, ‘I Swear’ and soon the superlative debut Distemper. There are moments when the intensity of their playing builds to burst and almost escapes them, like Younger’s bellowed cries to “shut up” in ‘Born Out of Time’ that breaks down to a mutter, or Owen’s boundless solo in essential rarity ‘Disconnected’. Don’t let the band members’ other achievements eclipse what The New Christs so convincingly accomplish together; be sure to hear them when you can.

How many Texs live in Texas? How many Texs live in Tex? “I cannot change what I am”, Perkins insists on the opening track of his assured new album with Don Walker and Charlie Owen – “as usual, 12 years after the last one” and the measure of its estimable predecessors – but if his ever-shifting collaborative history is any indication, Tex Perkins is a much more mercurial and adaptable character than the unreconstructed males that populate his and Walker’s not-quite-country songs, trapped by circumstances and their own behaviour. All the twists and turns from Greg to Tex, Beast to Thug to Ape, Cruel Seaman to Man in Black and on are mapped in Perkins’ eponymous memoir, also released this month. It’s candid, self-deprecating and episodic, with short chapters separated by single-page summaries of each record he’s made. Read it with You Don’t Know Lonely on repeat, hurry if you want tickets to their forthcoming tour, and please someone pay Don Walker to record audiobooks of classic Australian novels, piano optional, as his seasoned voice could be the nation’s collective interior monologue. 5. Odetta in Give Me Your Hand – Garry Shead / Sydney Filmmakers Collective (filmed July 1967)

American visitors to Australia have prompted some significant moments in black civil rights: like Jack Johnson beating Tommy Burns at Sydney Stadium in Rushcutters Bay to become World Heavyweight Champion, Boxing Day 1908; Paul Robeson singing for the workers building Sydney Opera House in 1960; Muhammad Ali spending time on the streets of Fitzroy and Redfern meeting black leaders and locals in March 1979; and Odetta singing ‘Give Me Your Hand’ at La Perouse Aboriginal Mission in July 1967. Folk icon and rights activist Odetta – feasibly the only singer to be praised as a key influence by both Bob Dylan and Courtney Barnett – was briefly engaged to Australian filmmaker and artist Garry Shead, who shot a black-and-white 18 minute short of her talking and performing as they travelled in Sydney together, fifty years ago this month. What did the settlement in La Perouse look like then? Do her discussions with the indigenous community there feature in the film? It’s difficult to know now, as the film can’t readily be accessed from the usual (or not-so-usual) channels. So Give Me Your Hand slips into this city’s secret history, where it’ll stay until some film festival curator or YouTube uploader decides otherwise.

This month’s most enjoyable waste of time has been trawling through the full 48-issue run of music paper Roadrunner, which existed from 1978 to 1983 and has recently been archived online in its entirety by the University of Wollongong. Founded in Adelaide by Donald Robertson and Stuart Coupe as a punk-inspired zine, with noteworthy writers including Clinton Walker and Bruce Milne, the paper’s scope grew to cover the broader music scenes of late ’70s/early ’80s Australia and is a fascinating time capsule of the period. For instance, if you want a glaring example of how different the live music environment is now compared to decades past, just look at a 1979 advertisement for the first Australian tour by XTC to see that Andy Partridge and co’ played 12 gigs (12!) in large venues in Sydney alone on that brief trip. The Roadrunner archive is available to read or download for free, while you can read a new history of the paper by Donald Robertson here.

Seeing the crowd’s response to Barry Gibb’s performance at Glastonbury Festival last month was fun, sometimes moving, but reading some coverage reminded that many still see The Bee Gees as a kind of joke, a falsetto irritant irredeemably guilty of disco crimes. It’s not as if Gibb should have anything to prove given the scale and diversity of his chart successes, but he simply isn’t accorded the same respect as his peers while a lot of the best Bee Gees music (Trafalgar, Odessa, Mr Natural) remains under the radar. If you are fond of ’60s pop and psych you should know Bee Gees 1st – actually the brothers’ third album but their first to be recorded in London soon after arriving from Australia. It’s a melancholy, mildly-lysergic, Beatles-worshipping record that celebrates its 50th anniversary this month. Bee Gees 1st has its fans, like Captain Sensible or Anton Newcombe (whose track-by-track breakdown I heartily concur with and encourage you to read) but it’s still relatively unheralded compared to lesser albums of that era with heavier reputations. Start with tracks like ‘Cucumber Castle’, ‘Every Christian Lion Hearted Man’, ‘Red Chair Fade Away’ and ‘In My Own Time’.

Starman Books is an independent publisher of high-quality illustrated books that celebrate Australian music, with collectible releases that are as much works of art as the music they honour. Started by James and Lisa Anfuso, Starman’s first release was a mammoth 3-volume set of the history of Australian concert posters, Rockin’ Australia, followed by the autobiography of acclaimed local soul music pioneer, Jeff St John. Now comes the first book by Hard-Ons bassist Ray Ahn, collecting 30+ years of Ahn’s distinctive and sometimes controversial artwork, alongside his recollections of life in one of Australia’s longest-serving and best-known punk bands. Ray’s book – collecting some 750 artworks he has created, on record covers, clothing, skateboards, posters and much more – is a thing of beauty, as long as your definition of beauty involves satire, humour, and an irreverent take on popular culture. The Art of Ray Ahn is released in deluxe and collector’s editions, both numbered and strictly limited, and are selling fast. Coming up for Starman are titles like The Rolling Stones on Tour in Australia 1965-2014, Clinton Walker’s Suburban Songlines, an illustrated account of Adelaide’s Greasy Pop label, and much more to be announced soon. Ray Ahn paid tribute to the much-missed Ian Rilen, late bassist with the legendary X, by calling him “my all-time favourite bass player”, and X “the greatest band ever”. Ahn’s right, X was a powerhouse outfit that astounded Australian audiences with performances of raw and primal rock and roll. Steve Lucas, guitarist and singer with X, has lost too many of his comrades-at-arms across the decades but remains committed to both their memories and the band’s reputation through occasional live concerts and archival releases. X-Citations: Best Of and Rarities Vol. 1 is exactly that, a limited vinyl collection of the band’s earliest and most-loved recordings, which Lucas created through crowdsourcing funds directly from the band’s dedicated fans. Steve and friends, like Kim Volkman and Doug Falconer (ex-Hunters & Collectors) commemorate X’s 40th Anniversary with a show at The Factory on 21 July, supported by Leadfinger and Golden Fang. 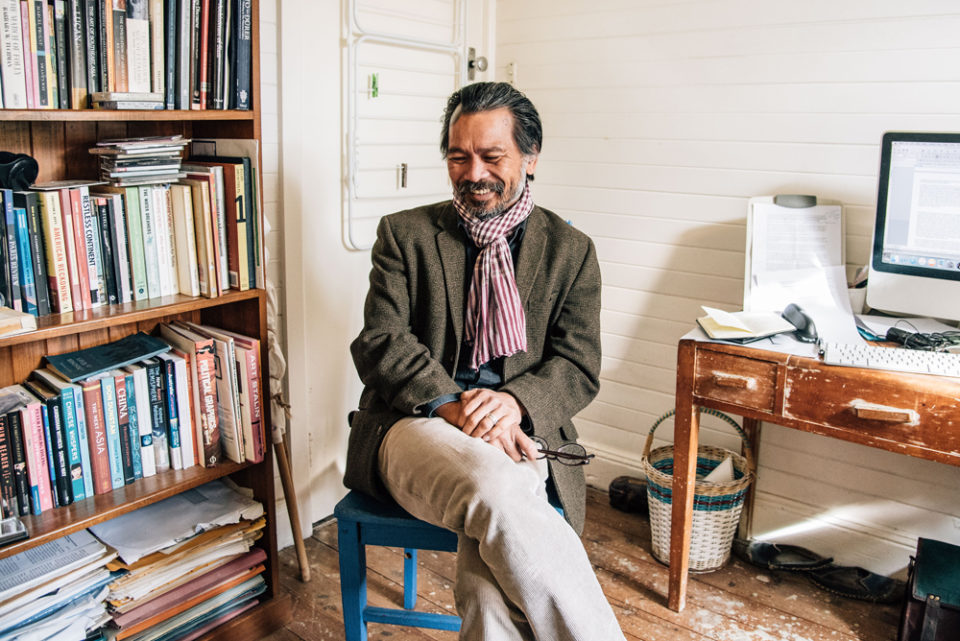