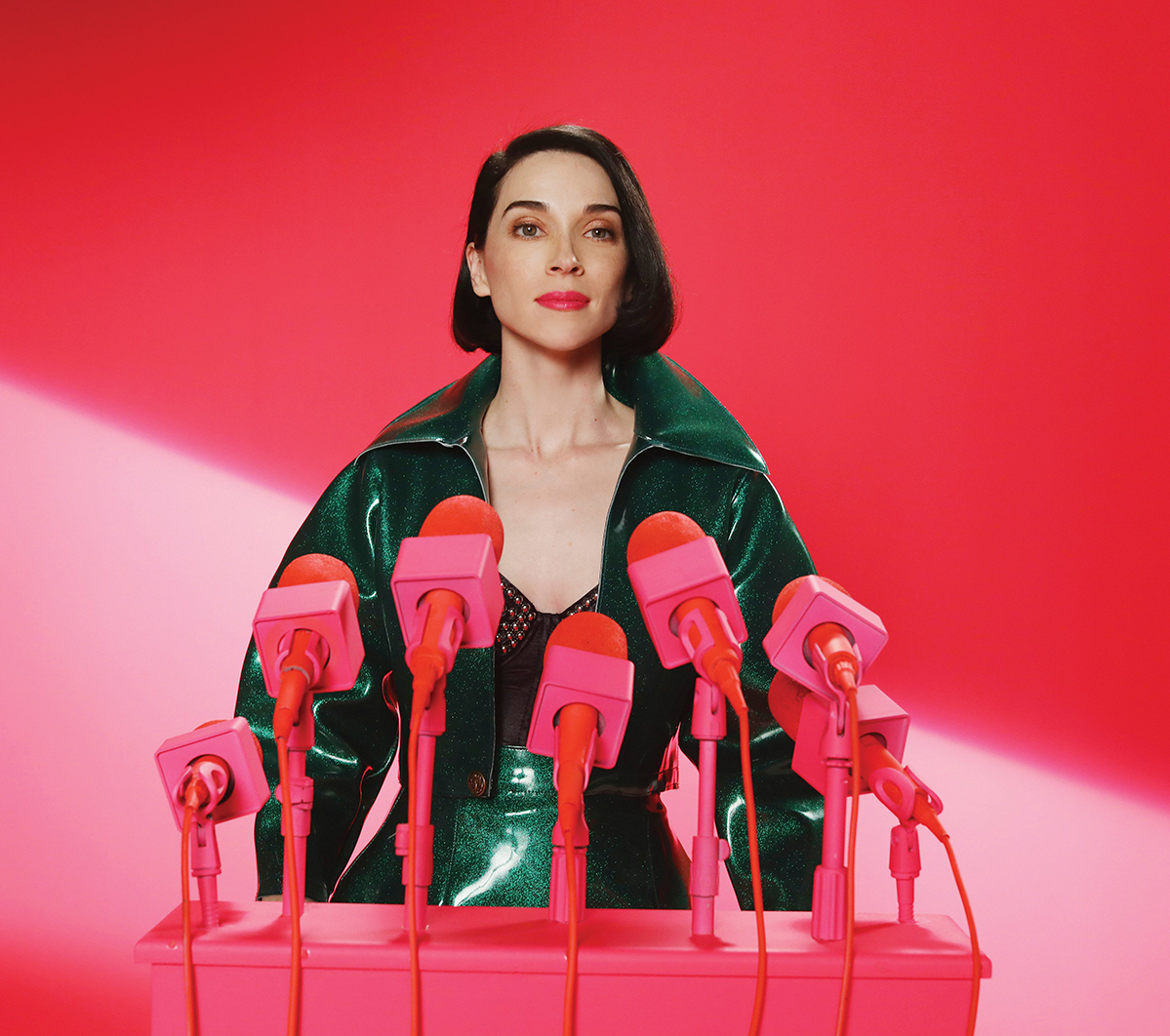 “I think we should do enough soul-searching to… know when we are being guided by fear or guided by something brighter.” Photography by Nedda Afsari
Text: Bernard Zuel Facebook Twitter Email

Throughout Masseduction, the fifth album from Annie Clark in her guise as St. Vincent, characters hang on to lovers with a kind of desperation because the prospects of life-surviving are so slim; beg the return of partners who were corrosive and near deadly, so as to fill a void; have others play saviour and martyr to protect them from their own demons; and give in to a kind of nihilism where punishing someone, anyone – including, or maybe especially, themselves – feels like the best way to ignore the abyss.

Anything to delay or avoid the inevitable, the future rushing towards them. A future captured in synths and guitars, in dancebeats and mechanical moves.

In one song, ‘New York’, a woman looks back on a lost affair that ended with her having “lost a hero … lost a friend”, but says she’d do it again because “you’re the only motherfucker in the city who can stand me”, even if she were to “trade our hood for some Hollywood” – the ultimate betrayal.

As if in explanation for this implied slur on Los Angeles, in another song, ‘Los Ageless’, the narrator describes a golden city of blackened souls where “the winter never comes… mothers milk their young” but she knows that she can never leave, and she can never end the obsession that has corrupted her.

“Oh my Lola, we really did it now/I’m a monster and you’re my sacred cow,” sings Clark, who grew up in Texas and lives now in New York. Happily. Mostly. Single, for the moment. Though not that long back, decidedly not single.

Within this reverse paean to the city of angels there is a line that seems to sum up a good many of the missed or misplaced connections of Masseduction: “I try to write you a love song but it comes out a lament” and the question worth asking is this: is the person who worries about what might make a relationship end realistic or pessimistic? Healthy or unhealthy?

“I feel like you have to have a little bit of both: you have to be able to totally suspend your disbelief and believe that crazy, romantic love is still possible and true and magic; and then know that when a little bit of the dopamine wears off you might realise that you are with a monster,” says Clark. “I don’t think it’s terrible to be practical in certain ways.”

That line though, the album as a whole really, is a reflection of that fight we have within ourselves – between dreams and fears. We are told that our dreams define us: what we want to be tells us who we are or who we want to be. But could it be that it is instead our fears which define us? That what we are scared of being or happening to us describes who we are and how we live?

“I would agree with that. I think we should do enough soul-searching to become self-aware enough that we know when we are being guided by fear or guided by something brighter,” says Clark, whose manner is sometimes so light as to suggest private amusement, whose pre-album promotion involved a series of “interviews” where she answered off-screen questions with absurd but nearly sensible non sequiturs, but whose focus never drifts.

“Clearly not everybody gets there but you look at the world as it is right now, people are insane or doing insane thing and at my most charitable sometimes I think, God you know, the human condition is suffering and people are scared. And people are angry because they are scared, and then they are doing insane things because they are really terrified. Even though it’s not the best way to deal with that, I totally understand people becoming drug addicts. It’s not that I go, ‘great’ exactly but I get it. I totally understand.”

If that fear of the future seems understandable – her current tour is called Fear The Future – it is not inevitable for Clark who says the only time fear mattered to her was during her first two albums when she worried that inactivity was not just time wasting but destructive.

“But I don’t feel that way anymore. The truth is I love making things and that’s my motivator; I’m not motivated by fear in a creative way. It’s just joy.” 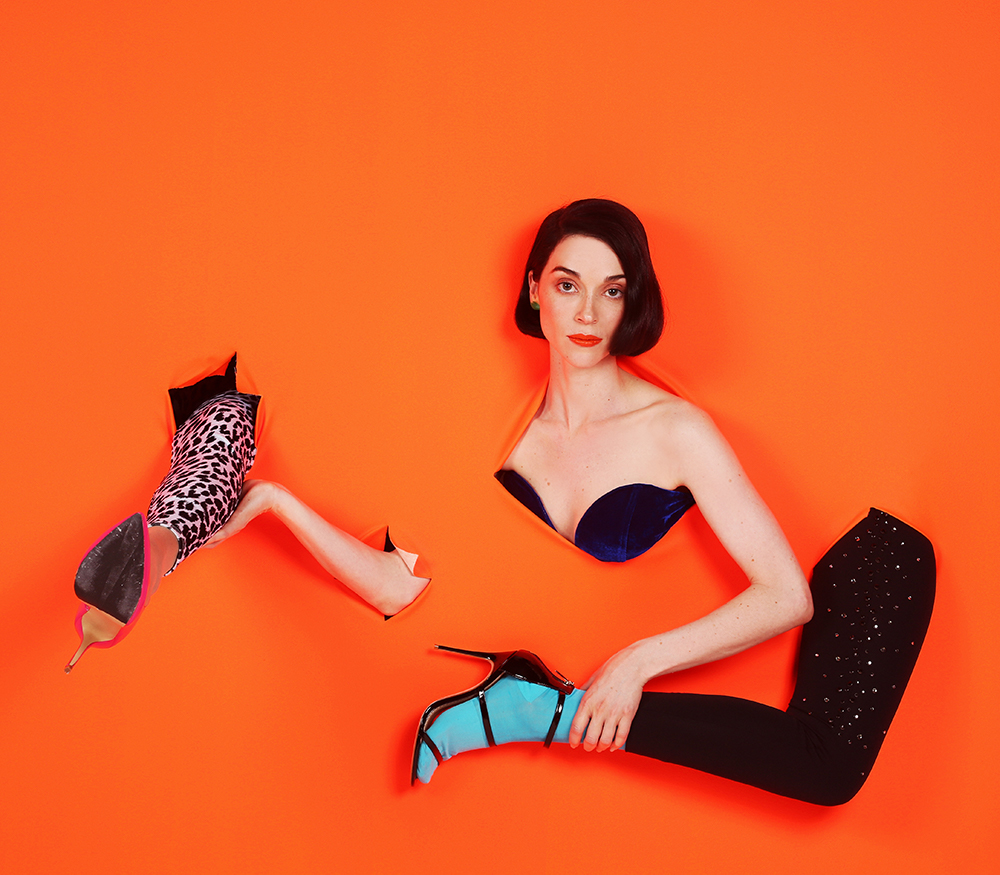 Does shedding fear allow her to be bolder still? Already known for marked and audacious changes in her visual as much as sonic presentations, losing the fear may well be what allowed her to conceive of the show she performed last year where almost every stage element was removed apart from her, her guitar and a video screen.

“I think that, yes, you could call that freedom from fear, or you could also call it embracing absurdity. You have all these chemicals on the table and if you put this one with this one or with that one, what’s gonna happen? I don’t know, but let’s find out,” Clark says. “That’s essentially the ethos behind doing the show that I did: it was a challenge. Can I entertain 10,000 people just by myself? Can I do that? The answer? I had no idea. But if you’re not risking, you’re not really doing it.

“The other side of it is you would be surprised at how many creative decisions I make just to make me laugh. Not laugh like I am making fun of the music for the audience, it’s never that. But just hearing something or saying something and going ‘that is ridiculous… let’s go for it’.”

One of the things that happens within Masseduction is how personal relationships, political circumstances or environmental upheaval around us can be missed by eyes, and fears, set only the future. What we have now corrodes through inattention. Which makes it intriguing that another project of Annie Clark’s is directing her first film, a version of The Picture Of Dorian Gray.

Intriguing because one of my interpretations of Oscar Wilde’s story is that it is quintessentially about fear of the future masking, or accelerating even, corruption within. It could be a companion piece to Masseduction.

“I think that’s very interesting. With that story, fear certainly, but in so many ways Oscar Wilde was a perpetual outsider because he was, (1) gay, but (2), an Irishman romping around in English high society. And Dorian Gray is a rumination on the corruption of the upper-class, the idle rich,” Clark says. “I would be remiss if I didn’t say that was in some ways the theme of some things on the album, a reflection of the times we’re living in. It’s also paralleled here because I’m talking a lot about power and fear of the future, a big authoritarian figure.”

The corruption that comes from a power imbalance, something else explored on the album, encompasses pretty much all aspects of our lives – personal, political, social.

“Absolutely,” she says. “It takes a person with a true backbone to find themselves in a position of great power and influence – suddenly being treated differently; the isolation that comes with that – and not become corrupted. It would take a Herculean moral character because it’s hard to hang on to that, especially if you are an artist and you have a self and then you are constantly reinventing these versions of yourself and thinking of yourself with, I would say a healthy remove.

“At least that’s how I think about these things because I have to look at myself as I am form, and as I am colour, and as I am movement through space. You have to wrestle with your ego so immensely because you’re going to be very bad at it. You are going to have painful experiences where you think you are better than you are and you have this moment of clarity and you are like, ‘ooh, shit’. You see so many people, especially of late, lose their head.”

Not, however, Annie Clark. 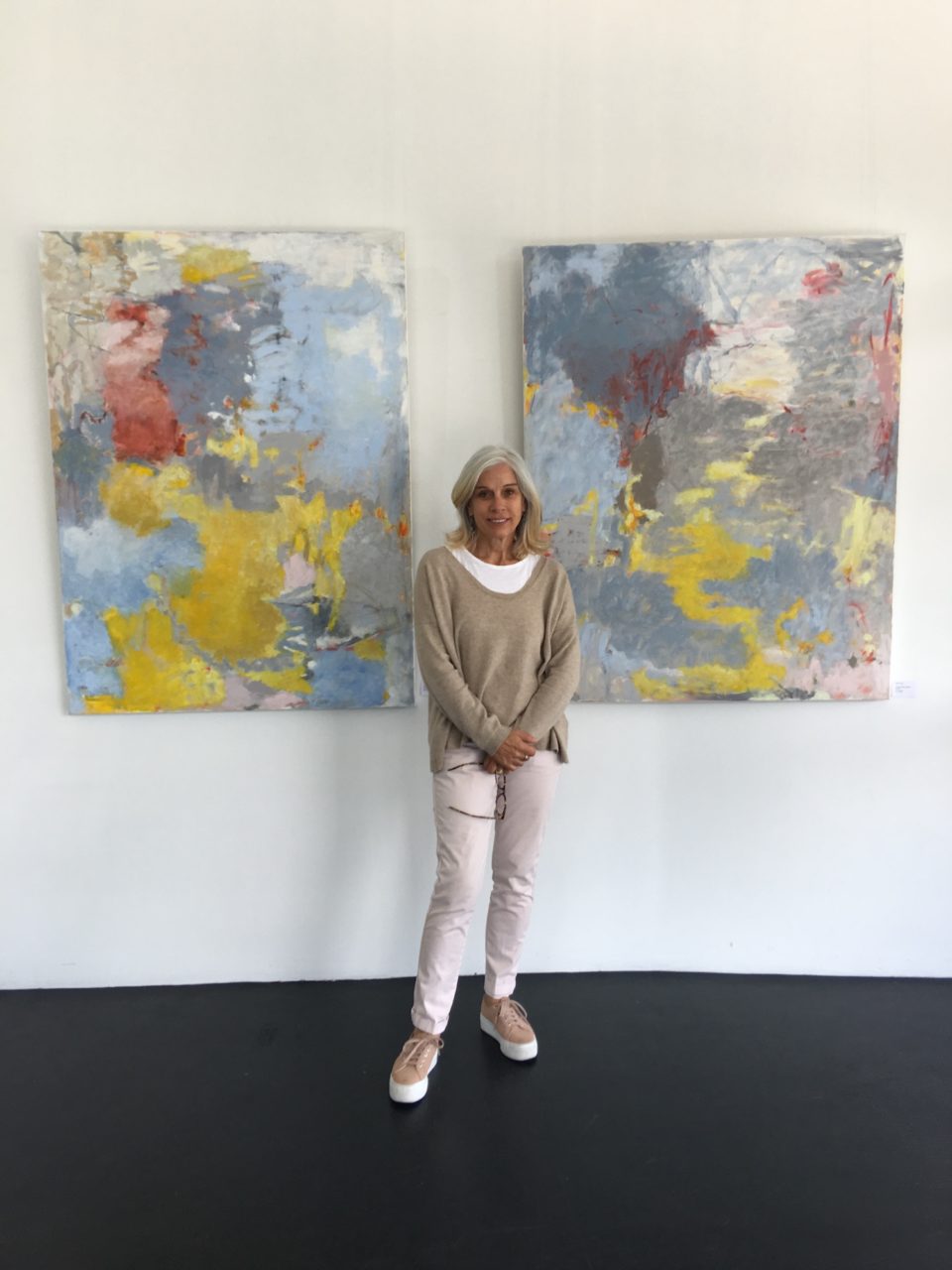 The Letting Go Janice Liley’s ‘Coastal Walks’ at Art2Muse
by Adam Gibson
‘Smokey Monday in Paddo’ has a menace that the Australian bush occasionally pushes to the coast: a raw land that sits out there every day behind our manicured urban lives.
Full Article
Culture
Interview

Into the Wild Artistic Director Eamon Flack’s vision for Belvoir
by Mark Mordue
Australia is such a knotty, pent-up, uptight society. Any way we have to release those things we should go for.
Full Article
X