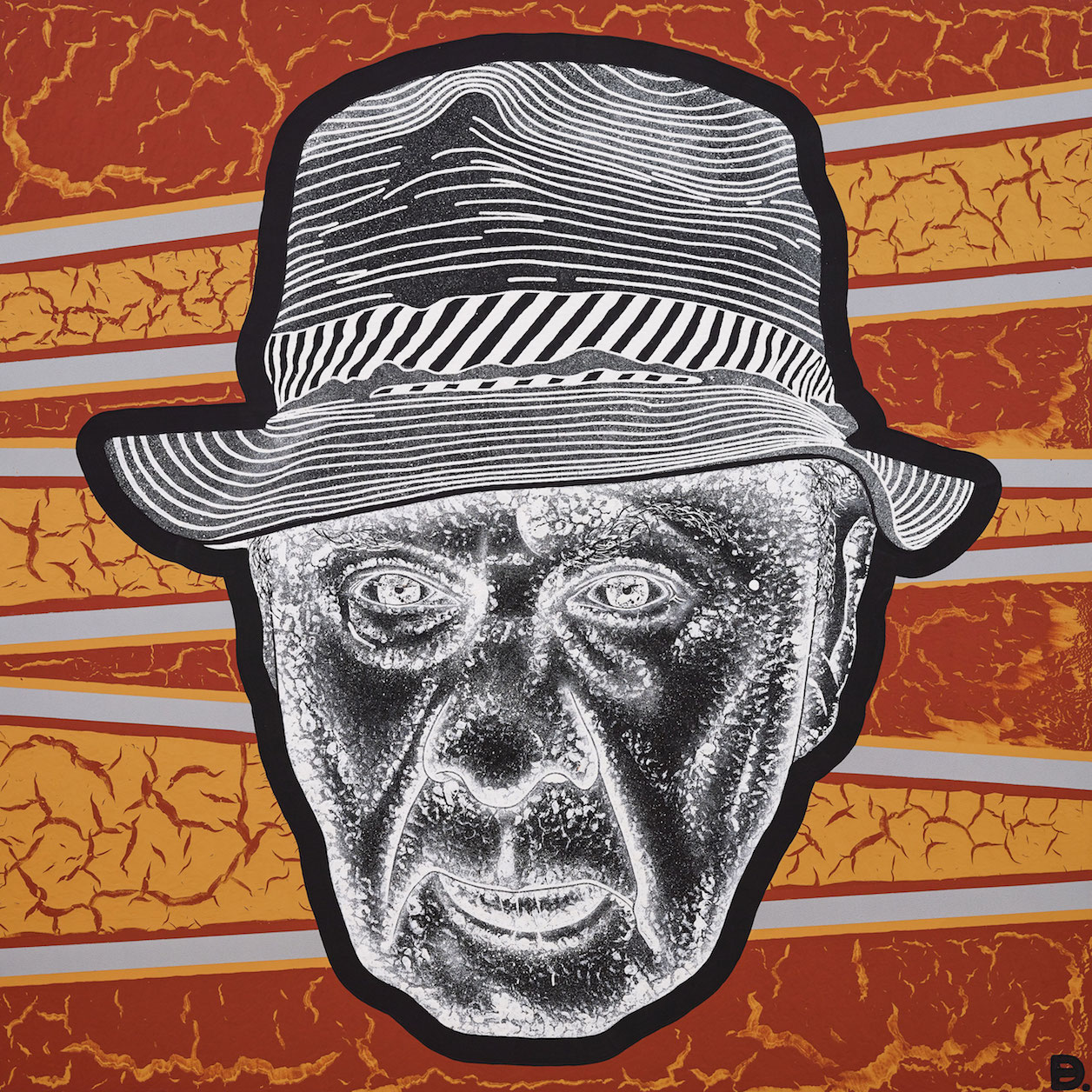 Two blokes get together in a small artists’ studio, on Redfern’s Little Eveleigh Street, and yarn. They’ve been doing it most weeks for more than 10 years now.

Uncle Roy Kennedy, a Wiradjuri elder and artist, is 84. Adam Douglas Hill, 48, is the son of a Dunghutti man and a mother of Irish stock. Adam is handsome with stubble and checked shirt and pork pie-style hat, with paint flicked about his rolled-up blue jeans. Uncle Roy calls him pretty boy.

Adam paints under the name Blak Douglas; a moniker conceived four years ago, in part as a “piss take” on Aboriginal people “throwing spears at me, saying I wasn’t black enough and whatnot”. The pair met at Newtown’s Walkabout Gallery when Adam bought one of Uncle Roy’s prints.

On Adam’s studio wall today is a colourful painting of Uncle Roy. It’s an early study for a work that turned into a large monochrome portrait of Uncle Roy – a homage to Roy’s print and lino-cut style. The work, entitled Uncle Roy Kennedy, is the second Blak Douglas portrait finalist in the Archibald Prize, currently on display at the Art Gallery of NSW until 9 September.

“I went down there last night, to the Art Gallery,” Adam tells Roy. “Geez it’s busy. Painting’s getting a lot of attention.”
“Where’s the money?” asks Roy.
“Hmmm?”
“Money,” repeats Roy.
“Fuck no, there’s no money. I haven’t seen any.”
“You’d wanna get fuckin’ something.”
“I know! That’s what I said. They don’t even give me a free feed.”
“I’ll have to go down there and straighten them out,” jokes Roy, with an expletive.

To his portrait of Uncle Roy, Adam added cracks around the surface, drawn from his own signature style, with an earth-toned background. “You know, his life’s been harsh and I wanted to show that through the cracks; the abrasive kind of stylised landscape.”

Uncle Roy is “a mission boy, mate, brought up on a mission”. Roy’s own painting from his Mission Series 2 won the 2009 Parliament of New South Wales Aboriginal Art Prize. The work shows his place of birth in 1934, the Police Paddock Mission by the Murrumbidgee at Darling Point, near Griffith, as well as the nearby Warangesda mission, where his mother Bessie was born in 1910.

I ask Uncle Roy what life was like on the mission. “Hard, very hard mate,” he says.

“We had people like Aboriginal Protection Board, they were supposed to be protectin’ us but they just ruined us. We had nothin’.

“We were allowed to have rations and coupons in the days I’m talkin’ about. Money meant nothin’. That’s why I can’t control it now.” He swallows and clears his throat. “Yep.”

Roy tried to learn his grandfather David’s Wiradjuri language. “But the welfare didn’t give us a chance.” His grandfather and other family members weren’t allowed on the mission.

“They were more or less, what do you call ’em? Fringe dwellers. They lived at the back of the mission. We used to sneak down and stay with them of a night time and listen to their stories. I used to listen to these old people.”

Adam relates because of his own late father’s story. “He wasn’t put in a home, but his mother was. He started working from eight years of age. Because his mum died when he was 10, then he was passed around his white family.”

Adam’s father, unlike many, was able to talk about his experiences. “It undeniably affects you. All black fellas are angry, you know, with what’s happened. Even though Dad was somewhat able to live within mainstream society, you can still see the scars.”

Roy is a “surrogate grandfather” to Adam: “A bit like adoption, isn’t it? Filling in locally when family’s not around. I’ve lost all my own immediate people.”

So what else do the pair speak about? They often like to yarn about cars. Adam’s current restoration jobs include a first model Mazda RX-7 and a couple of Minis. “I’ve had all the ones he’s had,” says Uncle Roy. “You name it, I ran ’em.”

What else? “Women!” says Adam. Uncle Roy’s best piece of advice? “Leave them alone, he says. Don’t let ’em in the door.”

“That won’t be for long,” says Uncle Roy. Adam throws his head back and laughs. “This is the weekend comin’ up,” adds the elder, nodding sagely. Hill laughs big again and Roy cracks his deadpan veneer to join in. 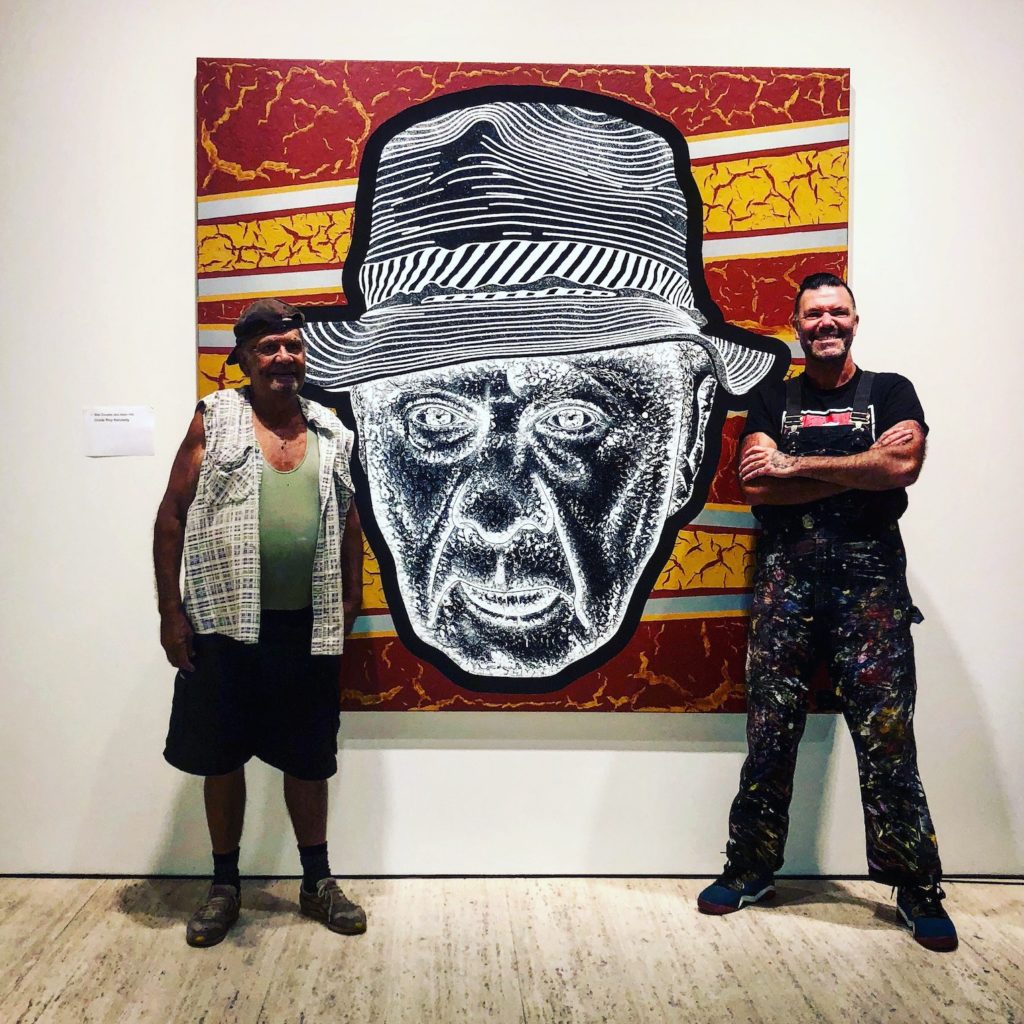 Gordon Donaldson Newtown Street Poet in Action
by Mark Mordue
“You gotta let it flow. You’ve got no time to think. I’m just picking up on the energy.”
Full Article
Culture
Theatre

Leaving the Panic Room ‘Hir’ at Belvoir Street Theatre
by Jonno Revanche
"It's not an easy play, it's a problematic play,” says Williams. “And it’s not a PC play."
Full Article
Culture

Still Together Lighting a fire for the Warumpi Band
by Neil Murray
Acknowledging our special history, Sammy Butcher and I talked about writing songs again. We felt we could still make a statement.
Full Article
X