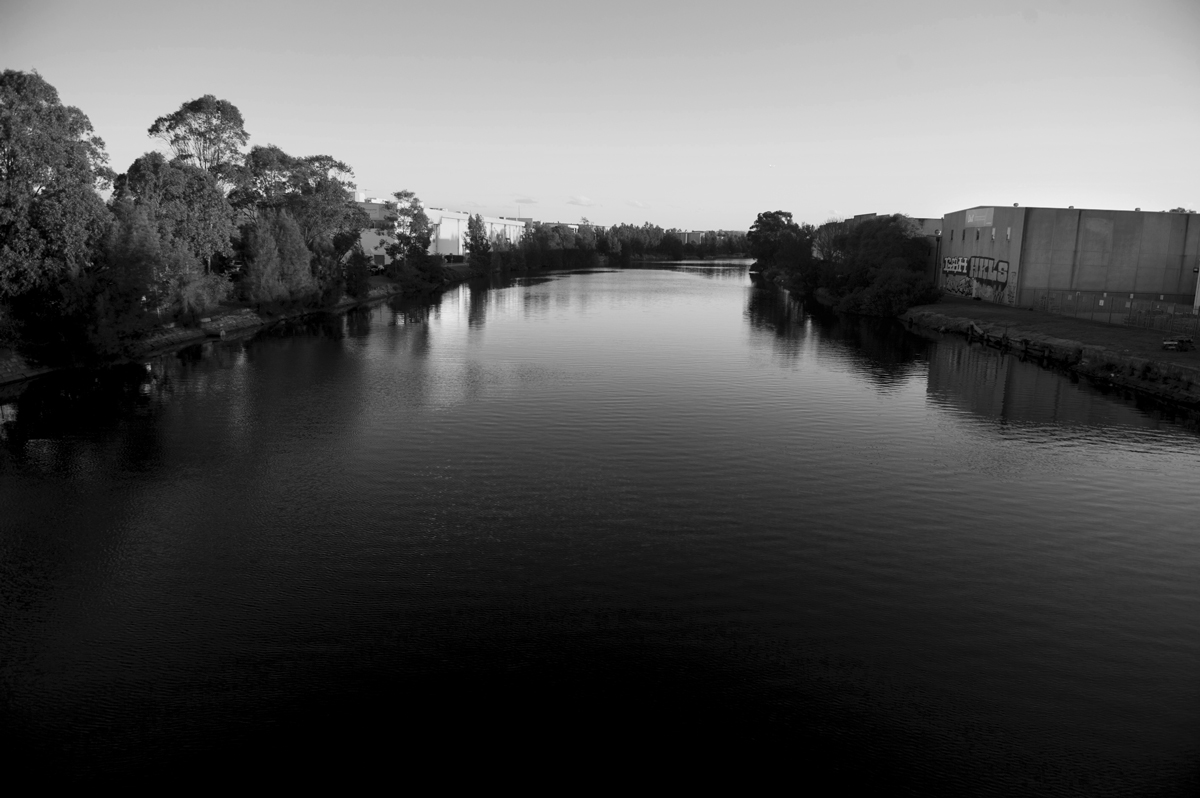 On an overcast winter morning under the Canal Road bridge, Alexandria, a generator powers a rave. The compression brakes of early-morning freight traffic hiss overhead but the din is quashed by the thick concrete and metal acoustics. 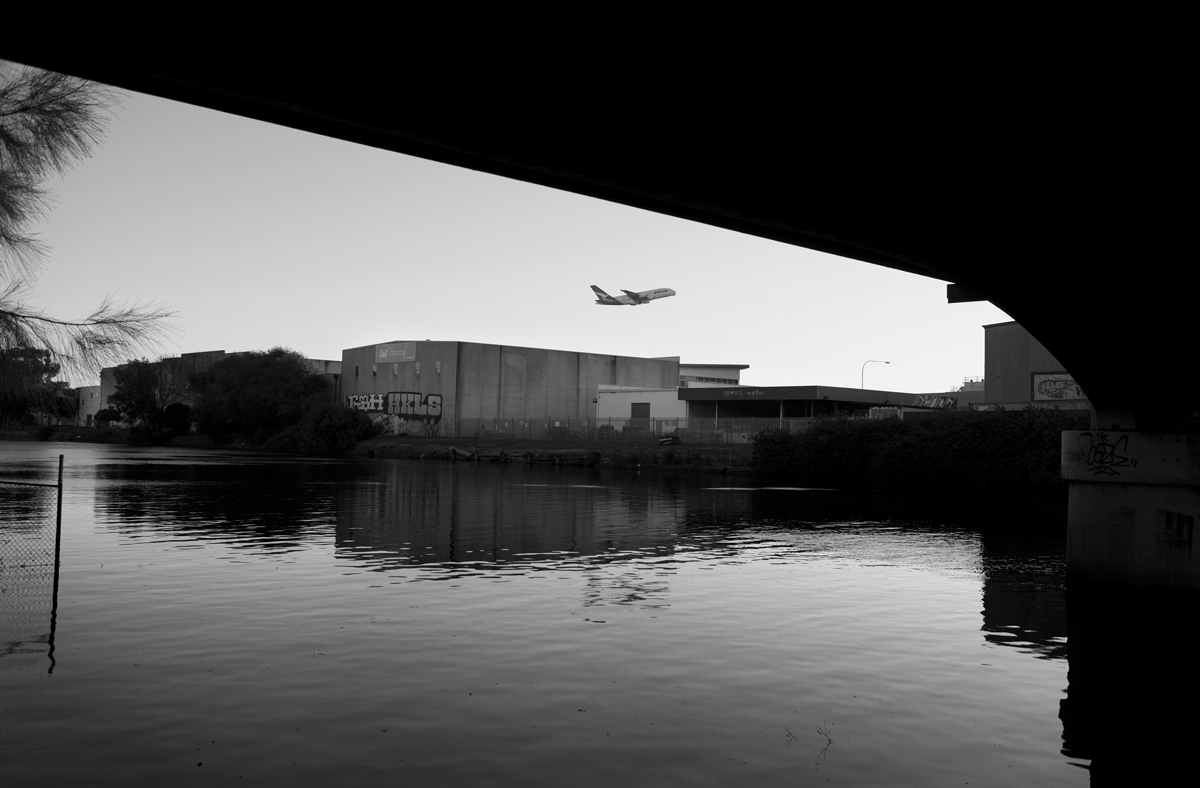 A throng of people connect in a large shifting silhouette, some dancing, others climbing the bridge’s internal walls. By the canal, people gather in groups of twos and threes, their reflections incandescent in the grey, putrescent water. It could be Kyiv or Tbilisi, but it’s Sydney.

In the afternoon, the site reverts to its true occupation, and becomes a forgotten relic of Sydney’s industrial past. The purpose of the Alexandra Canal, a rare example of late 19th century coastal engineering, has been undermined and reconstituted repeatedly with the evolution of land use in the city’s southern industrial zone.

In some respects a folly, these days the canal is little more than a foul if visually exciting corridor of water hidden from people’s enjoyment behind rows of factories and warehouses. Without it Paddington, Surry Hills, Erskineville and surrounds would be plunged underwater in recurrent floods.

Green Square also lies within the catchment. In recent years Sydney Water and the City of Sydney have been working to reduce the flood risk to the quickly rising mega-precinct through the construction of the Green Square Stormwater Drain. Nearing completion, the drain will dispense its flow into the Sheas Creek stormwater channel at the head of the canal where toxic sediments are at their highest.

Four-and-a-half kilometres in length, the Alexandra Canal is the longest stretch of constructed water’s edge in the city and one of two navigable canals in NSW. Beginning construction in the depression of the 1890s, the Department of Public Works built the sandstone-walled canal using unemployed labour.

It was originally intended to cut a decisive line between the East and West of the city for the transport of commercial loads by barge from Botany Bay to Sydney Harbour. Lack of commercial interest in the project meant common sense prevailed and construction terminated just south of what is now Huntley Street. The canal and its associated stormwater system were a key part of the colonial government’s efforts to safeguard public health after typhoid ravaged the city’s population in the 1870s and 1880s.

Back in 1849, the Slaughter-houses Act prohibited all noxious trades from within one mile of the city limits. Alexandria had become the locus of all kinds of grim occupations – blood boilers, soap boilers, fellmongers, tanners, animal steamers. These workers joined the paper and flour millers, wool washers and market gardeners of the area, who required easy access to water at Sheas Creek (the original site of the canal), a tributary of the Cooks River and Botany Bay. 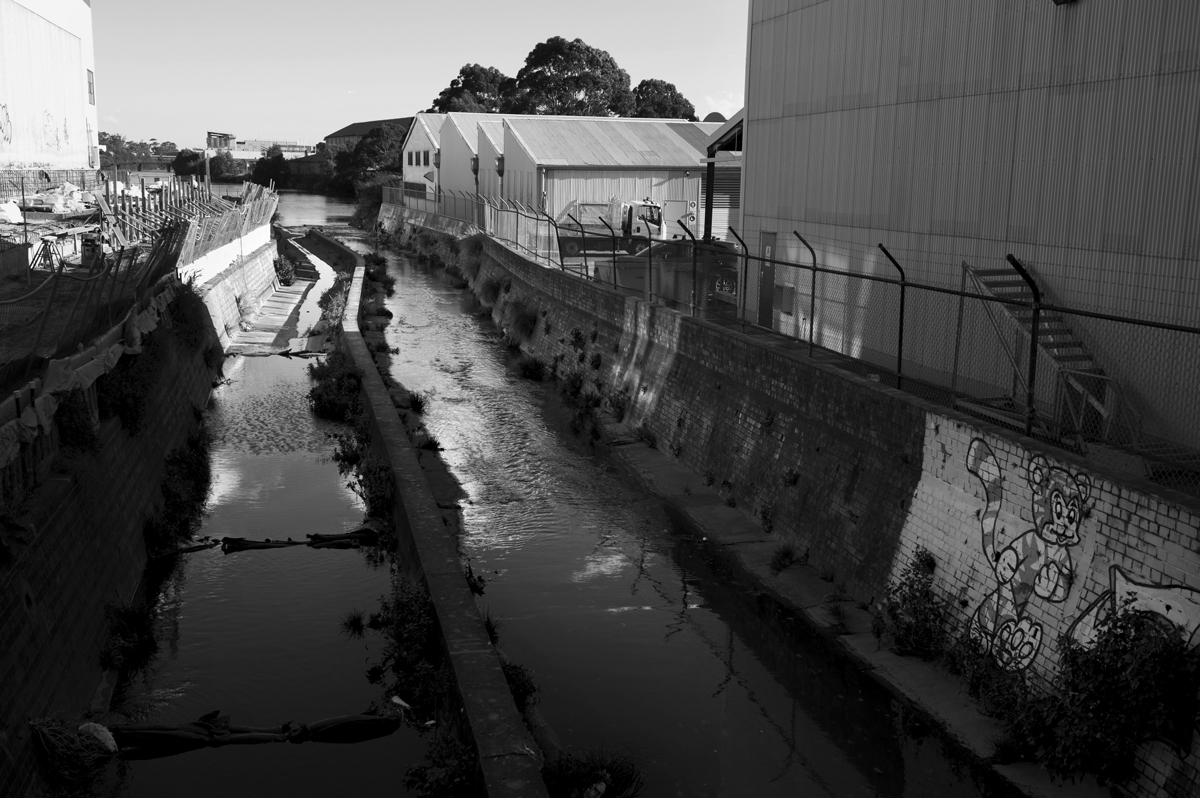 th century and for decades a slew of offal, blood, animal filth, oils and chemicals drained into Sheas Creek, securing the stretch of water’s primary postcolonial character as a receptacle for effluent. With the construction of the Alexandra Canal, industry surged, as did the stormwater runoff and poor waste disposal practices. In the 1930s, the lifting span bridges over the canal were replaced with fixed bridges to cater for the increased road traffic. With barges unable to navigate the canal, the wharves were demolished and its character again returned to that of an extravagant drain.

“A stagnant little trickle,” confirms a storeman at a warehouse located on potholed and dusty Burrows Road on the western side of the canal. Opposite is the WestConnex ‘spaghetti juncture’ build site. The four-storey high mounds of grey rubble and the gargantuan roadway they will become are perhaps a consolation for businesses here. “This will remain industrial,” the storeman reckons. His loading dock opens onto a 60-metre patch of grass, one of the few canal-side frontages on the frowzy strip.

“You see a lot of mullet coming in here. There’s a lot of birds. You get pelicans, cormorants. Occasionally you get gulls as well and that little grey heron. You often see them walking along the shoreline on the opposite edge just on that tidal mark,” he says. He points across to one of the intact original sandstone dykes glowing gold beneath the backside of a long industrial estate.

And it’s not all raves and waterbirds. “It’s used as a bit of a – what do you call it – lover’s carpark.” He finds spent condoms strewn across the grass some mornings.

The shallow canal silts up easily, which is part of the reason why the watercourse was never an ideal shipping route. Drownings in the tracts of sludge were common and several Sydney Morning Herald articles over the past century record the loss of dogs, divers and young men to the pungent morass.

In 2000, the NSW Environmental Protection Authority (EPA) deemed the bed sediments at the head of the canal a significant risk of harm to human health if disturbed. In 2008, an EPA briefing note warned anyone with development plans to beware “the most severely contaminated canal in the Southern hemisphere.”

Undeterred, idealistic local and state governments have dreamed big. The most ambitious vision is contained in the 2001 Alexandra Canal Master Plan, spearheaded by then Minister for Urban Affairs and Planning and Deputy Premier, Andrew Refshauge, who fancied the canal as the “Venice of Sydney”. The South Sydney Development Corporation, a government developer at the time, proposed a $300 million scheme with residential lots, waterside dining, pleasure craft, ample pedestrian and vehicle access and the completion of a meandering pedestrian and cycle route to the Cooks River and beyond – the Alexandra Canal Path.

Refshauge’s plans were mired in 2003 by the Department of Environment and Climate Change who deemed the risks associated with disturbing the toxic sediment too great or too expensive to warrant remediation. Now, with construction of the Green Square Stormwater Drain well underway, such concerns could return.

The canal is home to high concentrations of ammonia, nitrogen, phosphorus and heavy metals, to name just the short cast of horribles beneath. A 2014 review of environmental factors associated with expanding the stormwater system, which terminates at the canal’s raised sandstone landing, concluded “the construction of the [stormwater drain] will not disturb the bed sediments.” This is despite peak flow volumes increasing by 50 per cent in the kind of downpour Sydney experiences roughly once every twenty years.

A spokesperson from Sydney Water told NEIGHBOURHOOD, “The Green Square Stormwater Drain has been designed to meet strict environmental requirements, both during construction and operation. This means the operation of the drain is unlikely to impact soil in the canal or into the Cooks River, and that potential erosion or sedimentation impacts will be managed.”

Green Square residents, who live on top of the former Waterloo Swamp, will be pleased with the measure. Also pleased will be Sydney’s population of cyclists, runners and perambulators. The snaking concrete public access route currently under construction on the eastern side of the Sheas Creek stormwater channel (visible from Huntley Street) will one day form part of the long-promised Alexandra Canal Path, skirting the canal and Airport Drive before delivering people over the water to the Cooks River and west to Homebush.

Although the odd rower is still seen risking the sludge, water recreationists are most likely to lose out from the increased stormwater flows into the canal, Cooks River and ultimately Botany Bay. If that doesn’t spook the owners of pleasure craft and others with more than their ankles in the shallows then the juvenile white pointer videoed in the canal near Mascot in February 2017 just might.

Surrounded mostly by hostile roads and intersections, where road freight and private cars tyrannise the passerby, Alexandra Canal will one day open up its visual splendour to the city. No clear timeframe for the path’s completion exists just yet. Severed by three council boundaries – Marrickville, Bayside and City of Sydney – local government has struggled to coordinate anything like a walkway along the full length of this pretty yet cursed industrial spine.

This is fine, because its decrepit and forgotten nature is part of the appeal – something that should be unveiled suddenly in all its grossness rather than sanitised before consumption. Sydney may not like to admit this to its professionalised 21st century self, but it was once one of the largest industrial centres in the South Pacific. The Alexandra Canal says as much in the sliding murk of its tidal waters. 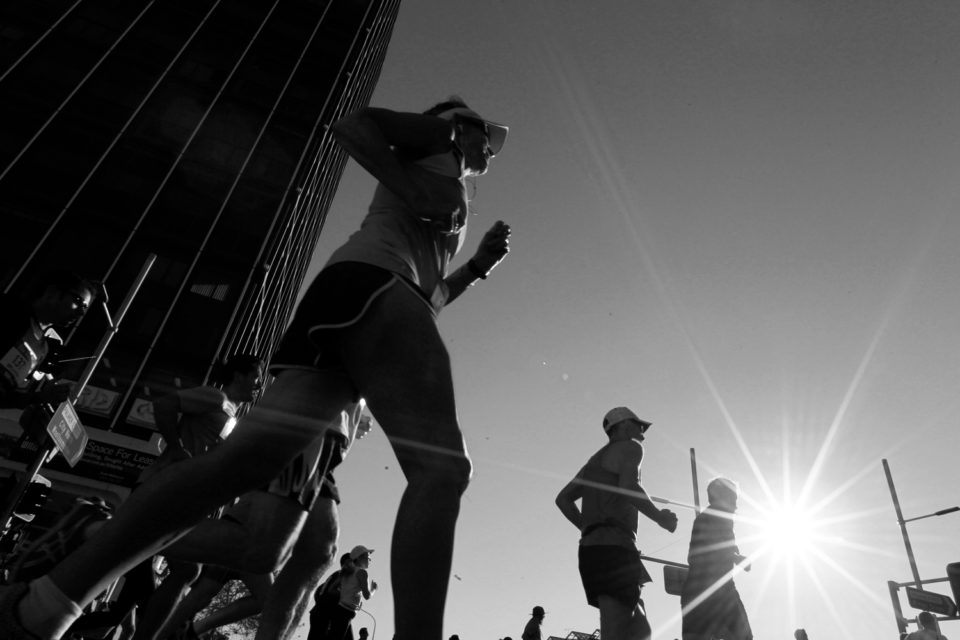 The Runaways Some reflections on City2Surf and The Bay Run
by Helen Razer
Running – not as an endurance sport, but an attempt to flee.
Full Article
Issues

Taking It All Apart The last report from Tent City, Martin Place
by Colin Gore
The NSW Parliament passed a law authorising police officers to move people from Martin Place. The law was aimed at Tent City, a homeless settlement in the CBD that has been in place for more than six months.
Full Article
X