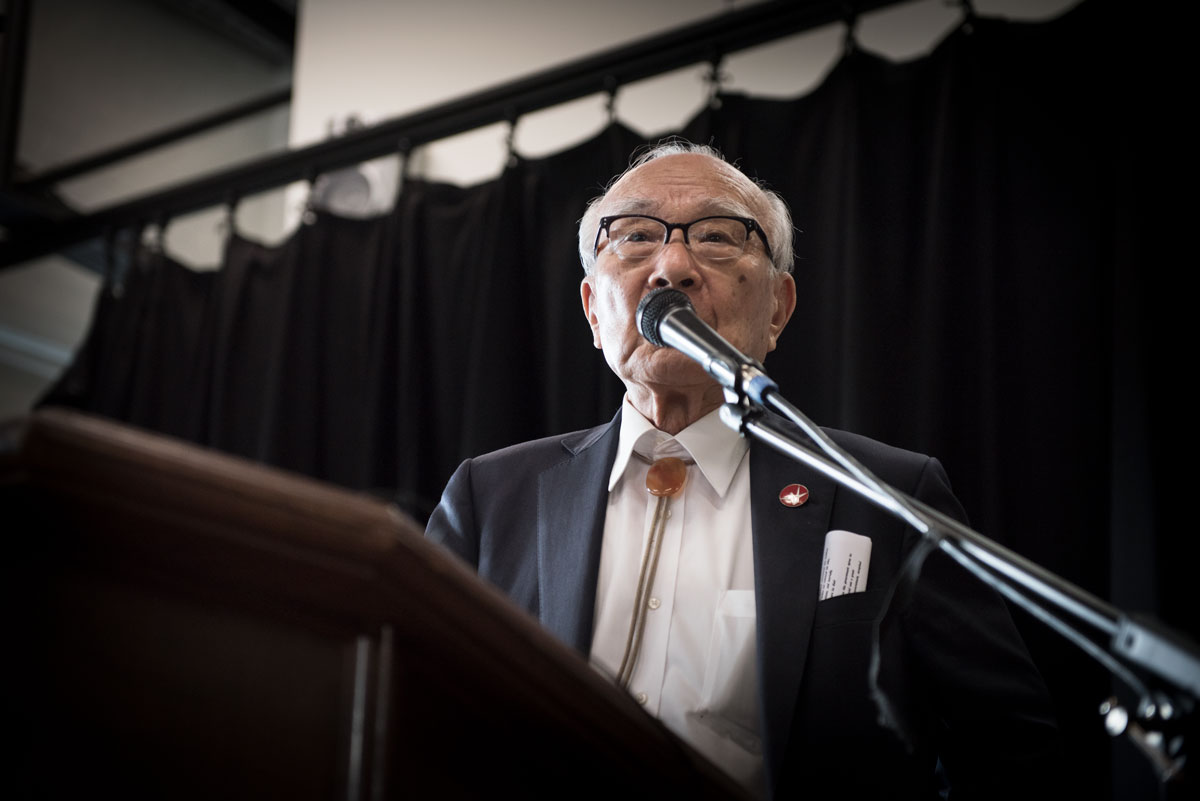 Terumi Tanaka is wearing a shoestring tie with an oval, amber clasp. We’ve been discussing through his interpreter his survival of the bombing of Nagasaki in 1945 which killed around 40,000 people. Time is running out.

It’s been a standing-room only two-hour event at Redfern Community Centre and people are impatiently lurking to speak to the revered hibakusha -the nuclear survivor. But the neckwear is so distracting that I ask him what’s the story with it.

The interpreter asks the question and he offers a little laugh.

Tanaka, 84, then points to a small badge on the lapel of his jacket.

The badge depicts a white origami-style crane and is worn by those who have survived a nuclear bomb. It instantly reminds me of Sadako and the Thousand Paper Cranes, the 1977 story of a little girl who survived Hiroshima. At age 12, she was diagnosed with leukaemia. Following the tradition that if she folded 1000 cranes, her wish—to live—would come true, Sadako set to work. The little girl died at 644 cranes but her classmates folded the rest in her honour. If you go to Hiroshima Peace Park in Japan, you’ll see her statue today. 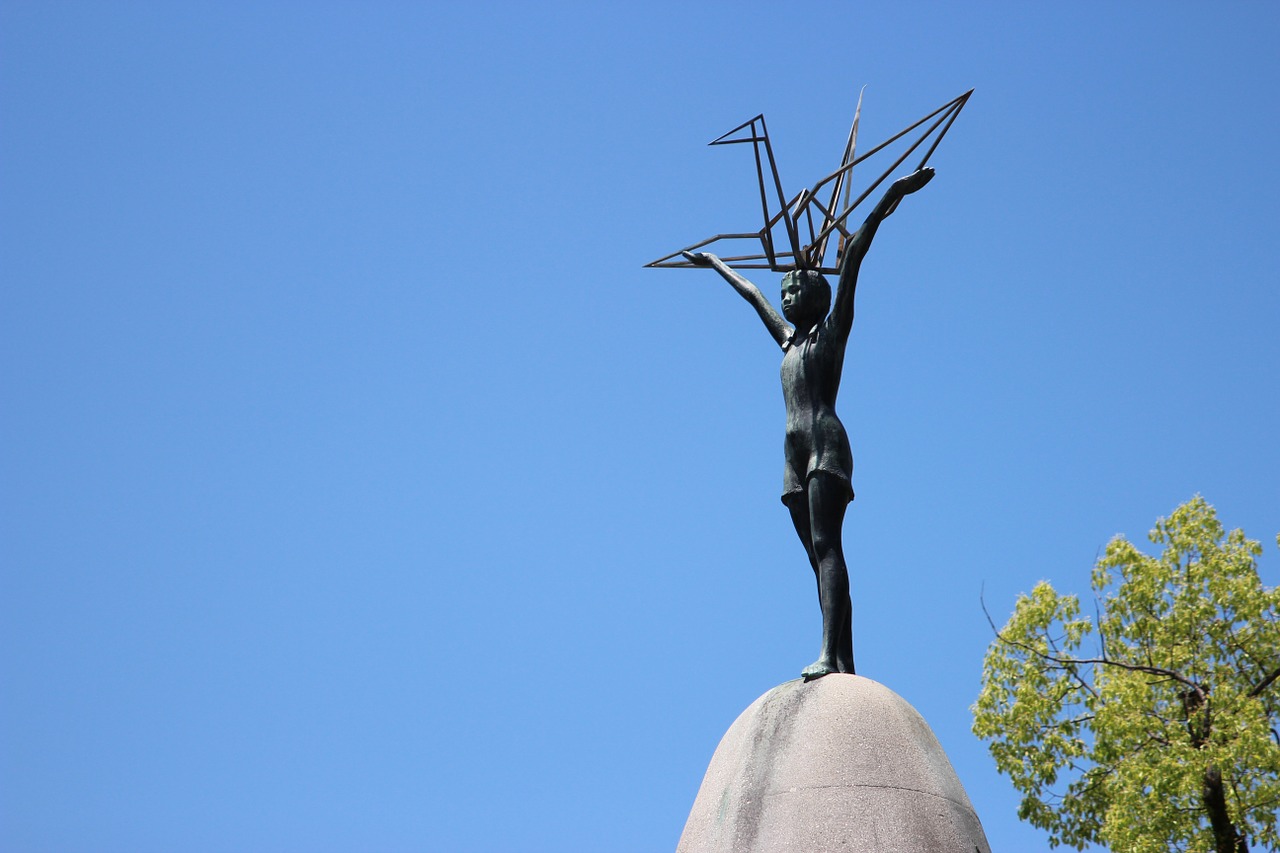 Aged 13 at the time, Tanaka remembers everything about what happened in Nagasaki. Here is a human who actually experienced a nuclear bomb exploding. He remembers the flash and fainting afterwards. He recalls waking up to his mother and two sisters crying over him. Days later, they went looking for their extended family, only to find the city had vanished.

He saw charred, naked corpses everywhere in the smouldering fields and rubble. He saw a child, burned alive – but still standing – in a ruined home. He says he watched as his severely burned grandfather began vomiting and with a high fever was killed by radiation poisoning. He helped cremate an aunt, who died in agony from horrific burns. He says nobody knew what was going on, they didn’t know what atomic bombs were.

Tanaka looks intently at me as he speaks. A long-time anti-nuclear activist, he has been sailing around Australia on a large cruise ship, hired out by Peace Boat – a Japanese not-for-profit which takes activists and socially conscious citizens on ‘peace’ trips. Sharing the podium with other nuclear victims, Tanaka has been stopping at various ports and giving lectures about the need for the Japanese and Australian governments to sign up to a new treaty banning nuclear weapons. (There are currently 15,000 in the world.)

Karina Lester is another speaker touring on the Peace Boat. A Yankunytjatjara Anangu woman, her father Yami Lester was blinded during British weapons testing in Maralinga in South Australia in 1953. Lester came close to tears in recounting the terror of the “black mist” which rolled over Aboriginal people in the remote desert the day the bomb dropped — some began burying their children in the sand to get away from it.

“These stories are sad stories,” she says. “Because of the remoteness of Emu Fields, because of where it was located, nobody was there to look after Aboriginal people.  Dad saw with his own eyes what happened to his community up there.”

At the Redfern meeting – and earlier in the day at a protest in Sydney’s CBD – there were a noticeably large number of older white women, some in linen and straw hats, who I assumed had been active in the 80s, back when there was a strong nuclear disarmament movement. Having waned over the years, public concern was reignited last month by US President Donald Trump’s macho posturing with the North Korean President Kim Jong-un over who has the bigger nuclear button.

Earlier, in October 2017, the Australian-founded International Campaign to Abolish Nuclear Weapons (ICAN) was awarded the Nobel Peace Prize for its efforts in advancing negotiations that led to 122 countries agreeing to a treaty at the United Nations to prohibit nuclear arms. Some analysts see the treaty, which is yet to be ratified, as pointless. None of the nine countries which have nuclear weapons were involved in negotiations and all boycotted the vote.

But for Gem Romuld, the Australian director of ICAN, who collaborated with Peace Boat on organising the speaking tour, the goal is to stigmatise the weapons in the way that chemical weapons and landmines have been. She also hopes to see a shift in how nuclear weapons are framed.  “For so long the nuclear weapons debate has been dominated by nuclear weapons states who talk about them as a tool for security and something that is like a necessary evil… [This] flies in the face of what the weapons have done in the world already and the devastating humanitarian impact that they produce,” she says.

While the Turnbull government is refusing to sign the treaty – Australia argues they need to be protected under the US “nuclear umbrella” in case they are attacked – Romuld says ICAN has collected pledges from two-thirds of Labor parliamentary politicians to support a ban. She hopes that at the 48th party conference in July they will agree to sign up to the treaty if elected.

I ask Tanaka how he felt about Trump’s recent announcement that the United States is going to expand its arsenal. “If he really knew the devastation, he would be crazy to think about having more nuclear weapons,” Tanaka laments. He saw the bloated corpses at Nagasaki. He witnessed his family and many around him dying from radiation. He saw his family, his people, as ash. Tanaka tells me, “Human beings should never have this weapon.”

Dunkirk All for one and one for all
by Cameron Williams
We have the resolve to endure, even when it feels like the light is being snuffed out of this world.
Full Article
Features 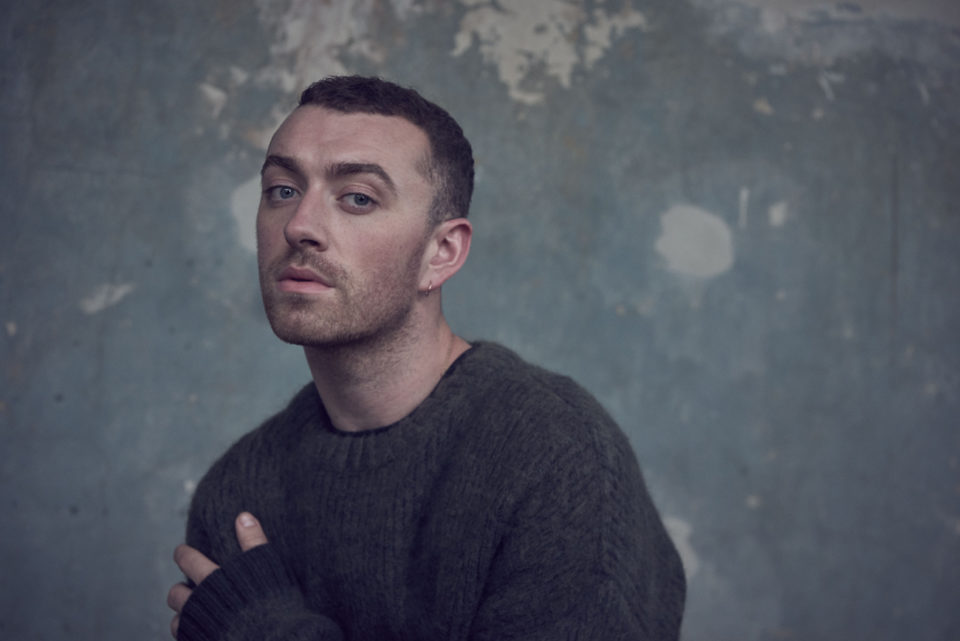 The Heart is a Lonely Hunter A filmed interview with singer Sam Smith
by Mark Mordue
“Every relationship hurts in a different way.”
Full Article
Footpath