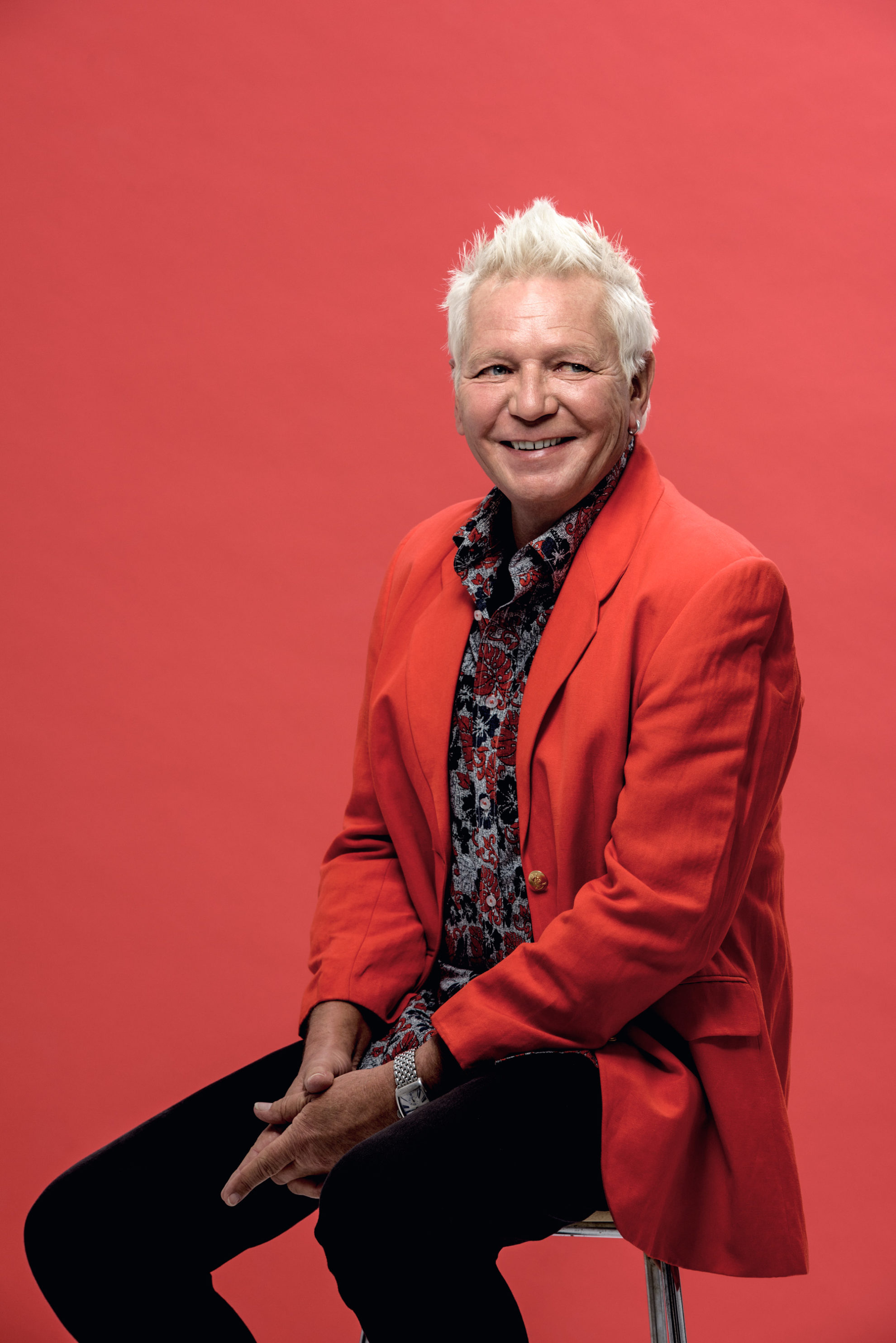 Iva Davies is a man of deep contradictions. Classically trained, he launched his career pounding out two chord stomps with his punk pop band Flowers; intensely shy and private, he’s at home in front of 40,000 people with the atmospheric and seductive synth-pop band that Flowers evolved into, Icehouse.

The contradictions come through in a body of work over thirty years. And hint, perhaps, at why Davies hung up his spurs after Icehouse’s Big Wheel album in 1992. “It was a horror a complete disaster,” he recalls ruefully of the record. Big Wheel was the first time Icehouse had not even come close to getting an album in the Australian top ten album charts – despite it being praised in Rolling Stone as being one of the band’s best and toughest sounding albums in years.

“I thought things have come to their natural conclusion at this point. We’ve had a good run,” says Davies, sounding like a man glad to have gotten away. “I finished that tour six weeks after my first child was born. So I thought, ‘Right I’m not going to do that anymore.’”

Part of Davies had always viewed success with suspicion, even after selling more than a million copies of Man of Colours and gaining two US Top 20 singles with ‘Crazy’ and ‘Electric Blue’ off the same album in 1988.

But he seemed to know, right from the start, that there’s a fickleness in show business that no amount of discipline or talent can ever beat. Take for instance his very first 45 [vinyl single] in the mid-‘70s when he was still a proto-folkie signed to RCA. Five times the test pressing came back with the wrong music or the wrong label copy and sometimes the wrong band. Finally a single arrived with everything in the right place – but Ivor Davies name was spelt ‘Iva’.

“And I thought, I’m going to keep this name just to remind me how unimportant I am in the food chain of this whole record company game,” he recalls with a smile. 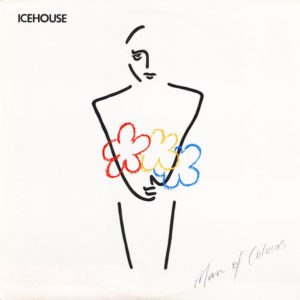 As the name Ivor Davies suggests, he comes from generations of Welsh singers and his grandfather has the medals to show for it. His mother was an accomplished pianist and music was always in his life although he was a teenager before he heard much rock ‘n’ roll. A girlfriend’s collection of glam and art rock from T. Rex to Eno and Roxy shifted his gaze out of the coffeehouse and desert boot set. Then punk came along and Iva immediately responded to the anger and the energy of the new sounds coming out of New York and London.

Davies, then living in the Sydney’s Northern Beaches (where he still resides today), put together Flowers with a set list that mixed art rock with punk rock. Almost overnight Flowers were one of the hottest live bands in a very competitive pub rock scene.

“We were fans of aggressive rock ‘n’ roll and those Sex Pistols songs were just made for me,” Davies recalls. “We played the Royal Antler, alternating with Midnight Oil. We used to dress the stage with plastic flowers and it was like walking into a lion’s den – but because it was so odd and because the music was so loud and fast and aggressive we got away with it.”

Davies’ day job around this time was writing sheet music for publishers – the Elvis Costello Songbook, the Little River Band songbook. This, and his training as a classical oboe player, gave him a solid grounding in writing songs. Eventually, he was persuaded to pen some of his own tunes.

“I had to pull apart hundreds of songs,” he explains. “Then you recognise the writers who could break the rules in interesting ways. That really appealed to me; that made me aware that there were formulas but also that you could do interesting things around that. Over the years I’ve made sure that every song that I wrote I’ve tried to make different. Each song was an exercise to test out a method.

“Imagine how nervous I was [with my band Flowers] sandwiching in one of my very first songs between ‘God Save the Queen’ and something from [David Bowie’s] Ziggy Stardust. I thought we are going to die a death here. I remember specifically the night we debuted the song ‘Icehouse’ and at that stage the song had no guitar part. It was just synth – and it felt to me like I was going to the gallows. Here’s this sea of black and safety pins pogo-ing and we play this Gothic synth scape. I think at the end they looked kind of shocked but in a good way. But I don’t know what I was thinking attempting something like that.”

Martin Fabinyi, founder of Regular Records, caught a Flowers gig at the infamous Stagedoor Tavern in Sydney back in 1980. “I thought he had a great voice and from the couple of originals he had you could tell he would be a great songwriter.” The deal with Regular Records was sealed at a boozy lunch on the harbour and a first album was soon underway: Icehouse by Flowers. Another deal with respected international indie Chrysalis soon followed, and led to the name change to Icehouse due to a Scottish band called Flowers. Icehouse didn’t even need to change their cover art to keep on rolling.

From the earliest days, Davies and his management looked to create an international career. Davies was also looking to expand his creative horizons beyond the constraints of Australian pub rock. A second album,

Primitive Man, was virtually a solo record and based more dominantly around keyboard atmospherics. Each subsequent album has taken risks in different directions. But Davies took his audience with him. “We were selling 300,000 and more copies of every album,” says Martin Fabinyi. “It was insane.”

From early on Davies developed a reputation for determination, especially with producers. “He’s always been his own person,” says Fabinyi. “He ran things on his own tracks.”

Davies always had the idea that he wanted his songs to be universal rather than autobiographical – but real life had a way of sneaking in there. Famously, when writing his debut LP he lived in a large cold house feeling alienated and paranoid. “A song like ‘Walls’ is more autobiographical than I could have hoped,” he says. Or possibly wanted when he later discovered his home in Lindfield had been a halfway house for rehab and psychiatric patients.

He also recalls playing ‘I Don’t Believe Anymore’ to a friend who said he “knew instantly there was something dreadfully wrong in my relationship.”

Ironically, the song to which he feel least connected is still his biggest hit, ‘Electric Blue’ from Man of Colours. John Oates, of the duo Hall and Oates, was so impressed with Davies work that he flew to Sydney and took up residence in Erskineville to write with him. For Davies it was an almost academic exercise – the title ‘Electric Blue’ comes from a random Tyrannosaurus Rex [later known as T. Rex] song.

“At the point John went back to America we had all the melody, very few words and these backing vocals,” says Davies. “I remember him standing in the doorway saying, ‘You record this song and put it out as a single, because if you don’t Hall and Oates will and it will be a hit.’ He was absolutely certain. I filled in all the blanks and I love it, but it’s not a song I’m deeply invested in.”

Man of Colours title song however could be the story of Davies life to that time – a painter with a box of paints and romance on his mind. The inspiration came from a number of sources – Davies’ mother was a painter who was losing her eyesight. He had just read a story about American artist Andrew Wyeth and a cache of 137 recently discovered unknown paintings. But he acknowledges that the character in the song is himself and the studio was his box of paints.

The tour was a 14-month odyssey act round the planet that left the singer an exhausted shell of his former self. “I was on the verge of a nervous breakdown,” he recalls. “If it hadn’t been for my bodyguard [who was with him 24/7 for two years due to level of fame that hit Davies] I would have definitely come apart. I was always in terror of losing my voice and it is exhausting and relentless.”

When the Big Wheel project wound up in 1993 Davies saw that he had been recording and touring non-stop for 15 years. He didn’t announce a retirement but put Icehouse up on the blocks. There were remixes to do and ballets to score for people like Sydney Dance Company. A project for the Millennium Eve at the Sydney Opera House (creating the score The Ghost of Time for Richard Tognetti and Sydney Symphony Orchestra) led to a call from director Peter Weir to write the soundtrack for Master and Commander. It wasn’t until the band came out of the garage for the Sound Relief benefit [for victims of the Victorian bushfire crisis and the Queensland floods] in 2009 that Davies got the bug for playing live again.

“They didn’t tell me about it until the line-up was established,” Davies laughs. “I hadn’t played for years but that experience of playing together was so good. People have a skewed idea that Icehouse was me the boss and a bunch of hired guns and it was never the case. It was a rock ‘n’ roll band. We were friends. We sort of looked at each other at Sound Relief and thought we should do this more often.”

After 40 years on stage Iva Davies is just coming to terms with his achievements. Icehouse now still has some of the punk fury of the early days and the melodic complexity of their ‘80s glory days. Davies can still sneak in a T Rex cover, jamming out ‘Jeepster’ alongside his electro-poem to Australia, ‘Great Southern Land’.

According to Martin Fabinyi, “Iva was always ahead of his time, maybe his time is now.”

In the early days Davies was prone to emphasize that ‘Great Southern Land’ was as much about the indigenous landscape as the country now, a feeling beautiful and solitary relating to “the ghosts of time”. Of course the song has become so iconic it stands among a handful of Australian classics that serve as our de facto national anthems. Less a haunting than a celebration of something continuing.

Recent live shows from Icehouse give voice to this communal feeling. “Playing live has its own adrenaline threshold. I’m always terrified before I go on but the feeling you get when you’ve had a great show is fantastic. There’s a camaraderie,” Davies says.

“I’m still surprised at the reaction we get playing live. I still look at the crowd and go ‘How do you even know this? This song was written before you were born.’”