Horses, Trolls and Hammers Improv theatre with the Bear Pack 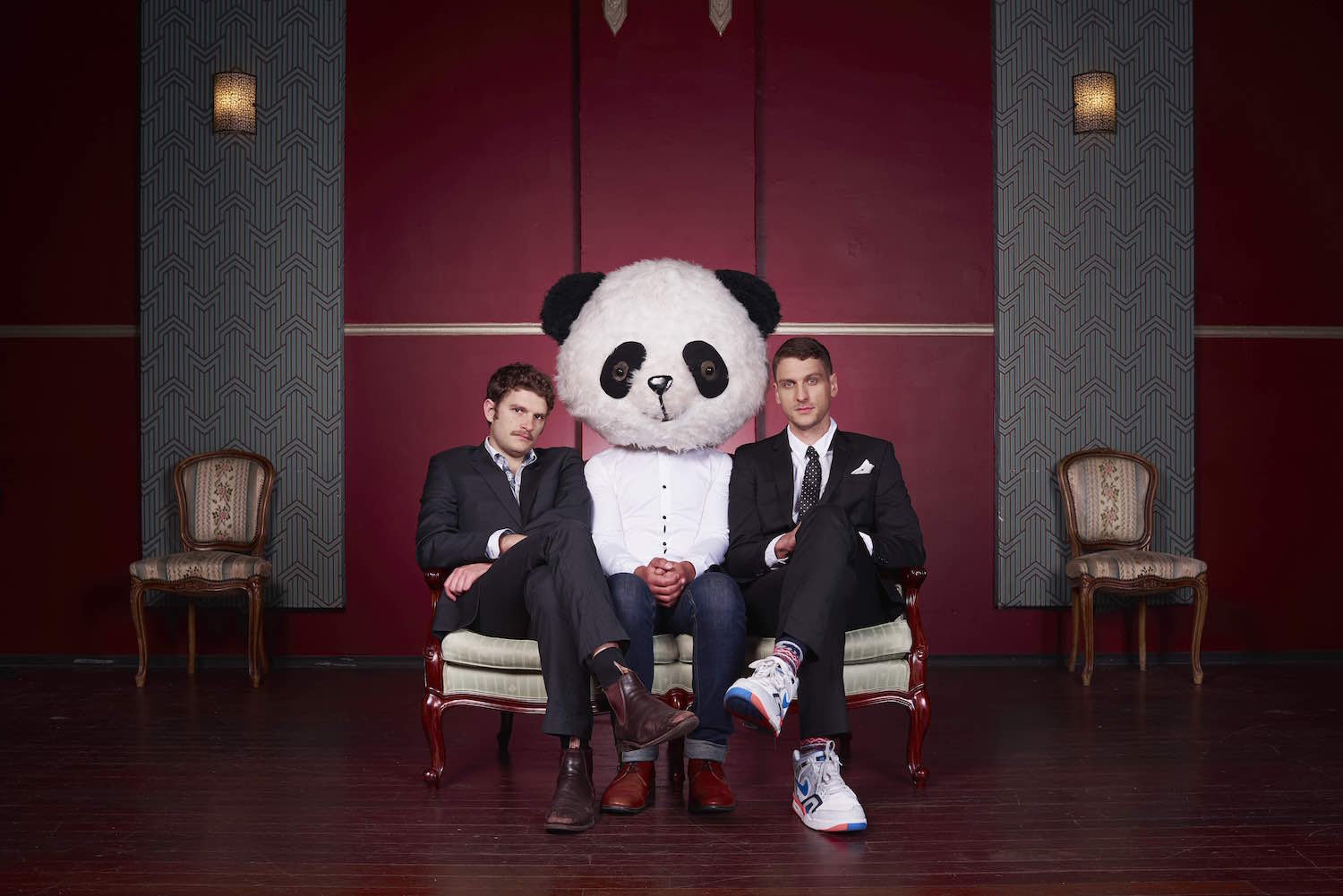 With no script and no preparation, Bear Pack comedians Carlo Ritchie and Steen Raskopoulos take two suggestions from the audience – an item and a location – and improvise an hour-long story.

When I meet the pair one morning at Scout’s Honour Cafe in Redfern, Ritchie tells me, “It’s always fun at festivals because some people don’t believe that it’s different every time. So they come a few nights in a row just to see if there are things that happen twice.”

I’ve seen their Bear Pack show more than twice, and it’s still difficult to believe that the plots and dozens of characters are invented on the spot. Surely they rehearse?

Raskopoulos pinches his thumb and finger together into an O: “Zero.”

Ritchie (thin, moustached): “Yeah, we don’t rehearse. I always say that if the show we did was planned, it’s terrible planning.”

The pair have come to be known as Australia’s best improvisers. I tell them I remember the show they did at the Enmore last year, where there was a subplot about an ineffective bridge-troll, who, by the end of the show, had to tell his troll-family they were being evicted from under the bridge because he couldn’t pay the rent.

Both smile, as if hearing about it for the first time.

The secret, they say, is that there’s no secret. Improv theatre is a process of constant reaction – just like a good conversation, but with shifting characters.

Raskopoulos emphasises the absolute trust between the pair; Ritchie calls the process “kind of like waking up, really… sparking”. Their show operates in a highwire mental state almost beyond conscious thought – to the point where they say it can be difficult to remember the show even minutes after it ends.

“Sometimes we’ll come off stage,” Ritchie says, “and I’ll be like, Oh man, you really cracked me up tonight! And Steen’s like, Which bit? And I’m like, I can’t remember man…”

Raskopoulos: “There’s a thing where people come up to you and say, I saw the one where you played a guy, and you got on a horse… And that’s like every fifth show, man.”

Ritche: “There are only so many ways to travel.” 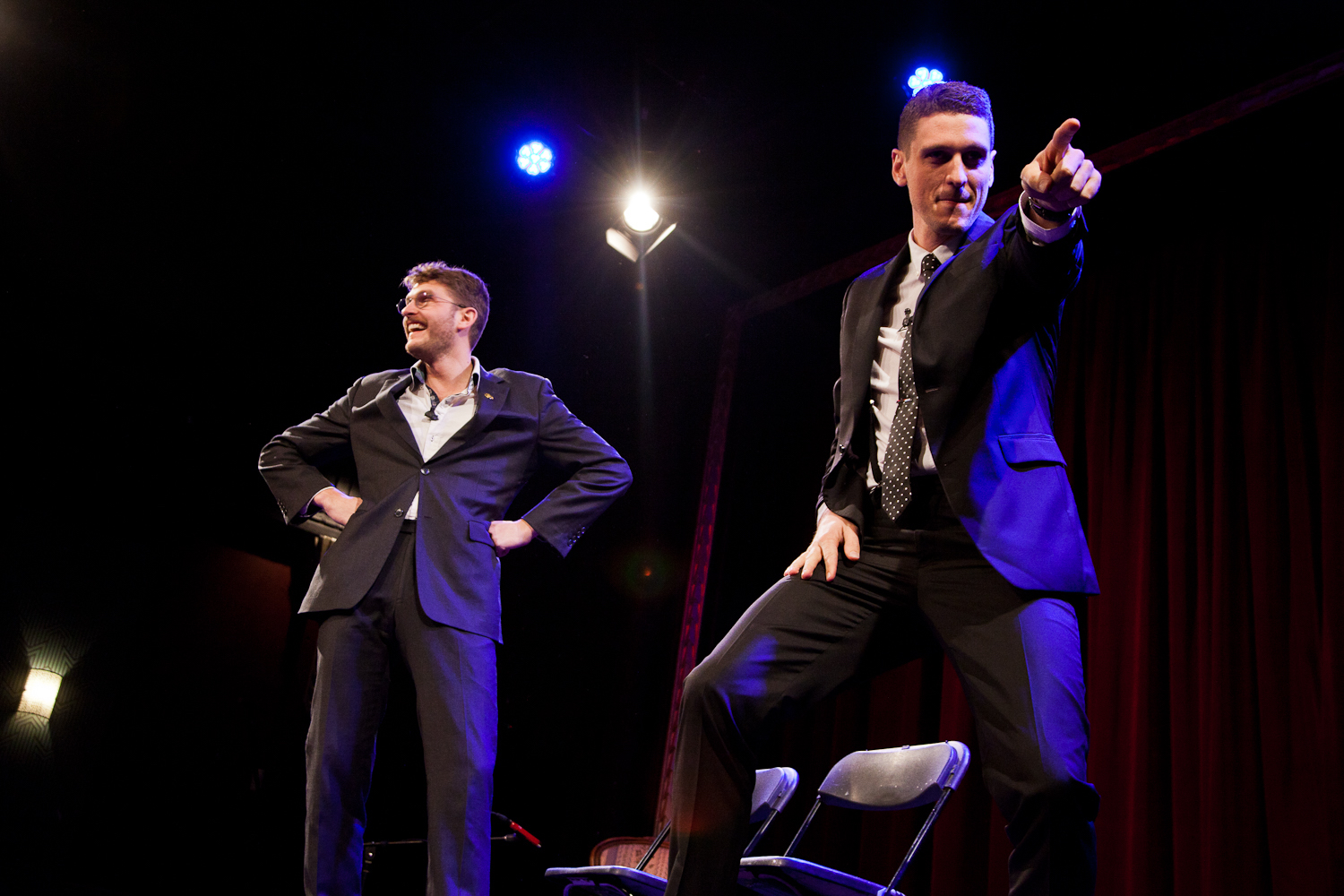 Raskopoulos and Ritchie first performed together in 2009 at a locally famous improv night at the old Roxbury Hotel in Glebe. Raskopoulos had met Ritchie at Sydney Uni, and taught him improv. “And I’d call him little bear and he’d call me big bear,” Raskopoulos says – hence, the Bear Pack.

At this point Ritchie breaks in: “I wanted to call it the Hammer Hour, but it just never got off the ground….”

Why the Hammer Hour?

Ritchie: “Um, there are no hammers in the show – we have a strict no-hammer policy on stage, so it was kind of a dumb name really, but I tried really hard. We had some test groups, it didn’t play well with the test groups, yeah… But, you know, that’s life sometimes, you just gotta go with the punches.”

In 2011 the pair started a comedy night at Hermann’s Bar, and began performing in their current format of a fully improvised story – what they call a yarn. They moved the show to a bigger stage – the Chaser’s Giant Dwarf Theatre, on Cleveland Street in Redfern – and added a third member, cellist Ange Lavoipierre, who improvises a soundtrack for each show. Since then they’ve taken their show to festivals around the world, and last year sold 1,200 tickets when they played the Enmore Theatre.

Improv is designed to look seamless, but, like all skills, it can be learnt with effort. Three years ago Ritchie and Raskopoulos founded Sydney’s Improv Theatre School. As with their show, the growth of the school was exponential: from 16 in their first class to over 200 current enrolments today.

For the first time since sitting down Raskopoulos gets a tiny bit shy, and I hear the word “proud”. Ritchie talks about how, before their school, he could have named every improviser in Sydney: “And then that very first time we had a [class graduate from the school], I just thought, Jesus, all of a sudden there are 20 new improvisers. And now there’s, like, a hundred new improvisers every three months, it’s just crazy…”

Raskopoulos: “We get all different walks of life. We get lawyers and doctors and–”

Raskopoulos: “Business types who just want to get more confident, wanna get better with their social skills.”

When I tell them that they’ve given me more than enough to write about, and that my piece can only be 800 words, Ritchie widens his eyes, incredulous, and Raskopoulos joins in a second later.

Raskopoulos: “And then halve it again.”

Carlo Ritchie of The Bear Pack will be performing with special guests at the Art Gallery of NSW’s Art After Hours throughout January, on Wednesdays (10th, 17th, 24th, 31st) at 6:30pm. Entry is free, and no bookings are required. More information here.

Horses, Trolls and Hammers – Improv theatre with the Bear Pack

Marginalia Shaun Prescott’s ‘The Town’
by Alex Tighe
“The people in the town lived as if they would never die, but they were not heroic or foolish like in books and music. They were only there.”
Full Article
Culture
Interview