In 1957, famously, the distinguished Aboriginal water colour painter, Albert Namatjira, was the first of his people ever to be granted Australian citizenship – except that he wasn’t. Not only was he not the first, he wasn’t granted citizenship either. It is a comfortable myth, beloved of White Australia.

What actually happened was that his name, and that of his wife Rubina, were removed from the Register of the 15,711 wards of the state in the Northern Territory. The Register was an apartheid-style list of all ‘full-bloods’, which the authorities kept as a way of monitoring the indigenous population and also as a form of social control.

Names had been removed from the list before; for example, that of Adolf Inkamala, Albert’s nephew, a promising painter of the Hermannsburg School, who switched careers and found some success as a cattle rancher. His name was taken off the Register in 1955, apparently because the government wanted to do business with him. Specifically, they wanted to buy some bullocks off him. Which, of course, raises the question as to why Namatjira’s name was similarly removed.

There is evidence that Albert did not want it to happen. In the lead up to the publication of the 1957 Register, he consulted a lawyer to see if he could avert the coming excision. One reason for this was that, if he wasn’t on the Register, bizarrely, he needed official permission to visit his own tribal lands. But such legal recourse would have been possible for him only if he had the rights of a white person; which, of course, he did not—until he and Rubina had their names removed from the Register.

There was no official notification of his change of status. A friend, Alan Wauchope, read about it in the newspaper and came down to his camp at Morris Soak, outside of Alice Springs, and told him. It is alleged by some that, the very same day, officials of the Northern Territory government also came to Morris Soak, and took Albert into town to buy him celebratory drinks at the pub. It might have happened. Alcohol, which he could now legally drink, would very quickly lead to his downfall: because, illegally, he shared some rum with someone who was still on the Register.

Albert and another painter, his uncle Henoch Raberaba, had taken a taxi from Alice Springs to Hermannsburg. Albert had a bottle with him. The cabbie told the court that Henoch kept asking Albert for a drink, and Albert kept on refusing. But the taxi stopped twice during the journey, so that Albert could go into the bushes; once Albert left the bottle, capped, on the front seat, and the other time left it, uncapped, standing at the side of the road; it was on these occasions that Henoch drank, and that was what the court deemed to have constituted sharing. Albert got six months hard labour for that.

More crucially than the right to drink, perhaps, Albert’s removal from the Register meant he could enter into binding legal agreements; and this led, even more quickly, to the licensing of his copyright to a commercial entity. And that may, in fact, have been the reason why it was done. It may well have been a strategy, by people in the Northern Territory government, to allow access to the economic benefits exploitation of his copyright might bring. They were supported by those who, exasperated by what they saw as Albert’s profligate ways, thought that such a deal would be for his own good.

Albert signed the copyright agreement with Legend Press, whose then owner was John Brackenreg (1905-1986), a Perth-born former artist and gallery owner in Artarmon in Sydney. Legend Press still own Namatjira’s copyright. The legalities are complex, and most people who involve themselves in the issue point to the 1983 variation upon the 1957 agreement as the crucial transaction. This was when, they say, the Northern Territory government sold, for $8,500, Namatjira’s copyright to Legend Press.

It wasn’t. It was the 1957 deal that was decisive and it is this deal which, as a lawyer once told me, simultaneously offered Albert a regular, small income, and gave away his only major asset. The 1957 agreement was an assignment of copyright in all present and future paintings whereinunder Legend Press had the right to print and otherwise reproduce such paintings in consideration of a royalty of 12.5 % on nett sales. The fee for this assignment was ten pounds, a fraction of what Albert might receive, at that stage of his career, for a single painting. There was no term to the agreement. In other words, it was in perpetuity.

Albert Namatjira died in 1959. The following year, the Public Trustee of the Northern Territory took over the administration of his estate. Legend Press continued to pay the royalty, from time to time, to the Public Trustee, which in turn remitted those funds to Namatjira’s wife Rubina; or, after her own death in 1974, to members of their immediate family.

The copyright had, effectively, already gone. What the 1983 agreement did was get rid of the royalty too. It was to commute future liability for royalties via a lump sum, to be paid by Legend Press to the Public Trustee, representing the agreed present value of such future royalties. It was estimated, then, in 1983, that $8,500.00 was all that any future Namatjira royalties might amount to. Even at the time, this was a derisory claim.

The current campaign by Big hArt and others, including the founding of the Namatjira Legacy Trust to raise money with which to purchase back Namatjira’s copyright from Legend Press, focuses upon the 1983 transaction and appears to believe that, if enough pressure is put upon Legend Press, they will, for a consideration, or otherwise, transfer the rights back to the Namatjira family.

I don’t wish to sound negative but I do wonder if this strategy will work. There is no real incentive for Legend Press to surrender an asset they can continue to own until 2029—70 years after the artist’s death. I support the Big hArt campaign, and I hope that it succeeds; but I also think that there is an urgent need to look again, in detail, at what happened both in 1957 and in 1983: because there is at least a chance that from such an examination, a legal case might be brought which, without the need for Legend Press’s consent, would return Namatjira’s copyright to where it belongs.

It might be a mistake to assume that Legend Press’s motivations are solely financial, too. For the last decade and a half they have consistently refused to allow any works in the two biggest collections of Namatjira paintings, those in the National Gallery of Australia in Canberra and those in the Araluen Centre in Alice Springs, to be reproduced, thereby foregoing whatever licensing fees might otherwise have been due.

They do so, they say, because they are ‘in dispute’ with those institutions. I do not know the nature of these disputes. I do know that there are works in both collections, largely unknown, that if known would broaden and deepen current notions of what Albert Namatjira achieved as an artist. But, currently, only those who take the trouble to visit those institutions, and are able to view works in the stock rooms as well as those on show, may see these paintings.

I went to the NGA last weekend to see the Darling Collection: forty-five Namatjira works collected over the entire period of his working life. The one that remains in mind is of a great red bluff in the James Range, with slender ghost gums attending and a rocky line of purple hills beyond, wherein ancestral faces may be seen. There is water pooling in the foreground and, unusually, human traces inscribed on the landscape: a meticulously painted fence line, separating the viewer, and by implication the artist too, from the bluff and from the range beyond. The metaphorical inference is clear enough.

When Namatjira heard he had been taken off the Register, Alan Wauchope thought he seemed ‘constrained’. He asked him if, now that he was legally entitled, he might try again to buy some land in town upon which to build a house. Wauchope continues: He got up and walked to the open side of the bough fence and looked around at the encampments of his friends and relations for a long time before answering. ‘What’s the use? We’re better off out here. I don’t think they’ll try and kick us out of here.’ He was wrong. They did.

‘40,000 Years is Long, Long Time…’ Restoring Redfern’s famous mural
by Kate Bettes
“One woman walking past said it was a childish work. But I think that’s irrelevant. It’s important to community as a whole.”
Full Article
Culture

Cathode Ray Comfort The demise of Asian video stores
by Jin Hien Lau
Most of these video stores are gone now in Sydney; in the age of streaming, even my 65-year-old mum uses YouTube on her phone to get the latest Taiwanese variety shows.
Full Article
Culture 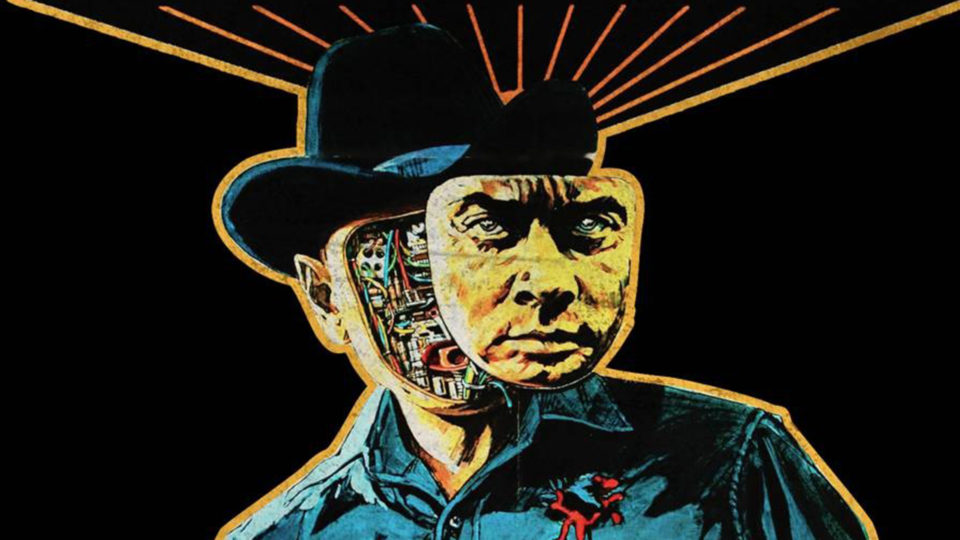