Calling on Paradise Laurie Anderson at HOTA on the Gold Coast 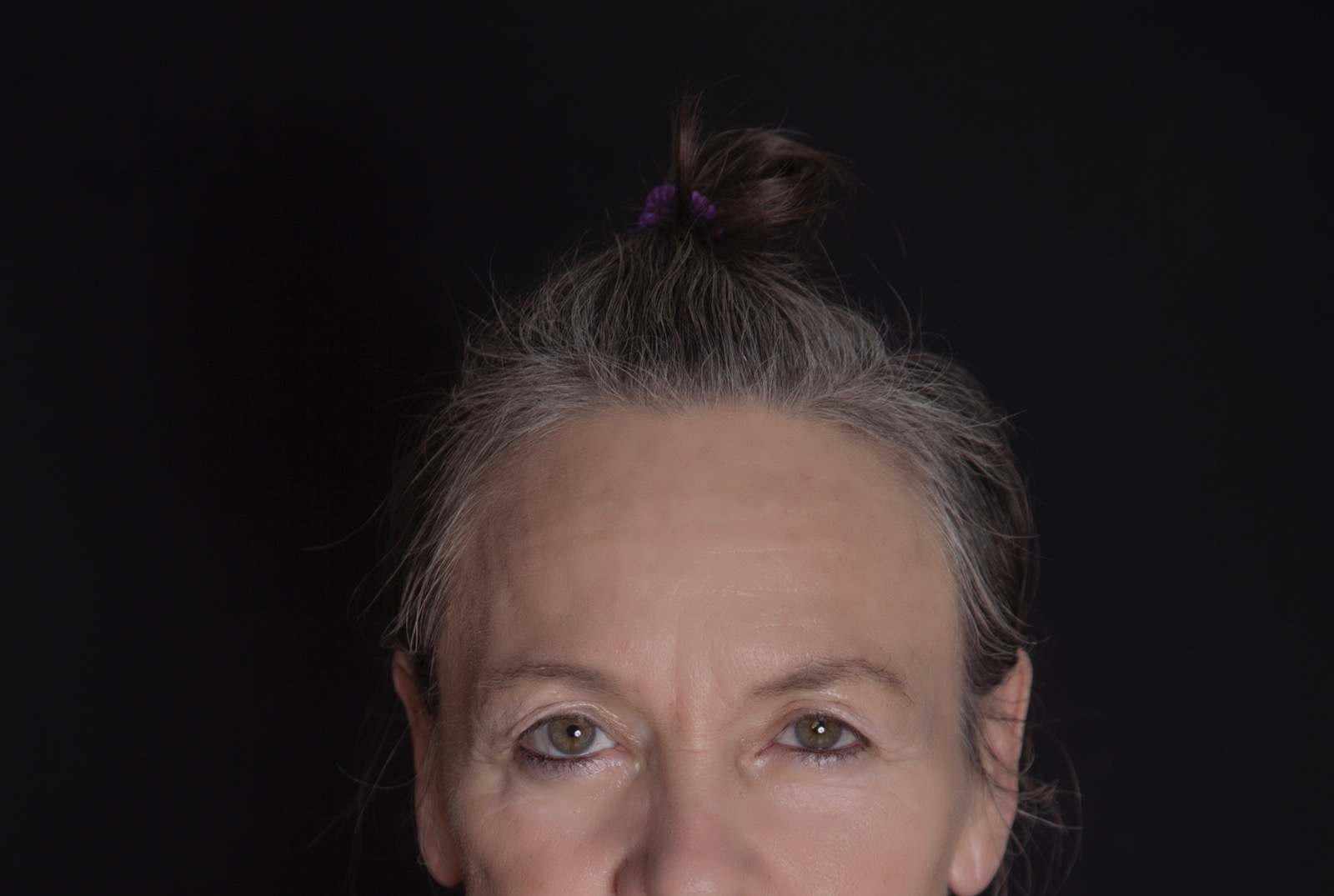 The sun is just rising behind the concrete skyline, jutting above and reflected in the lake in front of us, and my teacher asks whether I’ve done tai chi before. About twenty years ago. Do you remember what kind? She lists some options but I’m not sure. She nods and goes around the small circle, eight of us. Today we’re learning the Chen style. We start with our feet solid in the earth, bent knees, arms soft. Like you’re hugging a tree.

As she demonstrates the movements she recites the names in a voice that matches. Your hands like floating clouds. She points out that the actions might sound soft but their purpose is deadly. She makes a quick gesture. Decapitation.

She says one of her favourite parts of tai chi is practising with weapons and as she hops and leaps and kicks, moving fast to slow and back, this helps to learn it, imagining a sword in our hands. As we move through the steps, she occasionally stops to watch us, checking on the position of our bodies. It’s about making shapes. All of it is about circles.

As I follow along, I see how she’s open to the elements, her eyes wide, her instincts finely tuned. In the West it’s all about upper body strength. She raises her arms like a body builder. Like Superman. I blink at this word. Spoken in her tongue. It makes me smile as if I’ve tricked her into saying it. ‘O Superman’.

But the tree is top-heavy. We just topple over.

Beneath the slick surface, the schoolies, the fast cars, gold-plated metre maids and skyscrapers, the Gold Coast has slowly been emerging as a cultural hub. The expansion of HOTA (Home of the Arts) – pronounced hotter – and its first ever artist-in-residence, multimedia trailblazer Laurie Anderson, has established HOTA as a place willing to place the arts front and centre and take risks with programming. But there’s still a flavour of the parochial about the coast, the insecurity that is hard to throw off. At her first press conference, open to questions, the majority centre on Anderson’s first impressions of the Gold Coast. I’ve only just got here, she repeats once, twice, three times, with patience.

It takes me back to Lou Reed’s first interview at the airport on Australian soil in 1974 – the same sense of cultural isolation, of a country still wanting to prove itself – with a media unable to understand his irony, his attitude, his refusal to play the game: a performance that influences a whole generation of musicians in Australia like Nick Cave and Robert Forster as the punk age is dawning.

Used to jetting in and out of locations for a single performance, Anderson says it’s exciting to be able to hang in one place for a week and that what she loves most about creating and experiencing art is the chance to feel lost, to be disembodied; she hasn’t studied up too much on the Gold Coast because she wants to experience it as she goes.

During her residency, she has a busy schedule, crossing the boundaries of composition, spoken word, Tibetan music and philosophy, sound and visual arts. What brings it all together is her fascination with text and language and the ways in which our bodies can become instruments, tools of discovery. 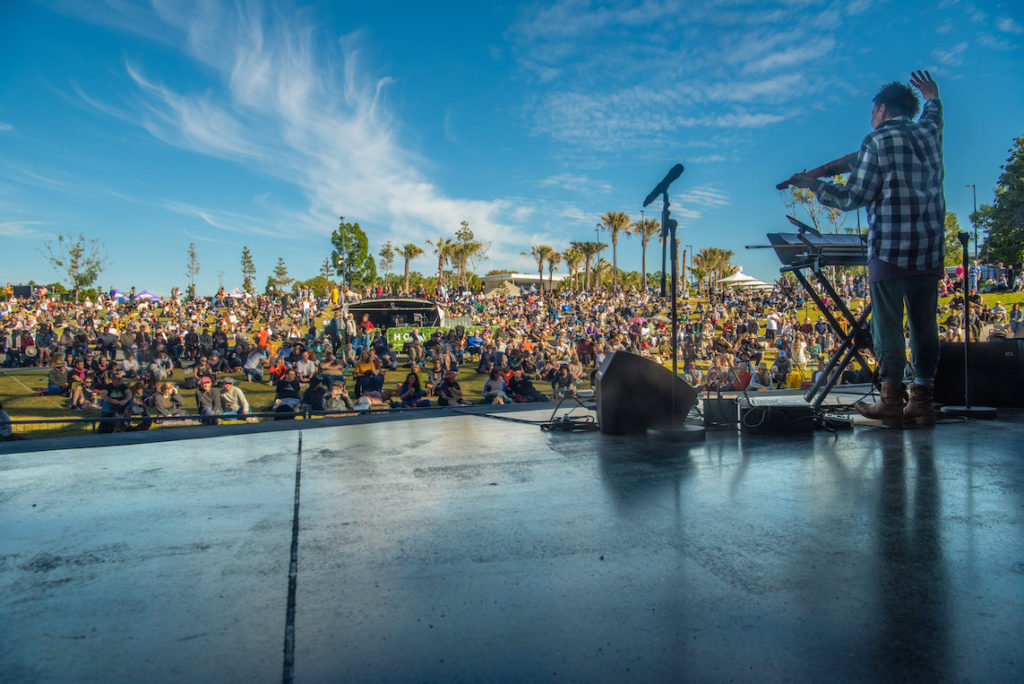 When you see or hear Anderson perform, she makes the planned seem random, and there’s the sense of a firecracker about to go off at any moment; not in the threatening sense, quite the opposite, in a swirl of cartwheeling sound and a shower of bright colour and light.

The opening night performance at HOTA is in the dark except for a glitter ball. Sitting in a black beanbag, a techno-snowstorm raining down, it takes a while to realise Anderson is with us in the audience. As the string quartet, CODA, starts to play her composition, SOL — dedicated to Anderson’s teacher Sol LeWitt — the glitter ball swirls and so do the walls, forcing me to close my eyes, to adjust to the gravitron rush. Laurie covers her eyes too with her hand as the stars play on people’s faces. At times it seems as if the music, the storm itself, is coming out of her body, showering us with notes. The disco-stars turn the audience into fragments, pieces of themselves, broken mirrors reflecting the night sky and the performers.

Anderson and the staff prepare us with care for the next show, Stories in the Dark. We’ll be in pitch black. If we want to leave, we’ll need to raise our hand. There will be night-goggled staff to take us out. But there are gradations of darkness and like a child I’m disappointed that I’m not scared enough.

The light I can still see is Anderson herself, shrouded in a corner of the room, merging voice, synth and sound effects like a foley artist to her mind-games. And her voice, a voice I know so well, takes on notes of hypnosis. Picture this. The colour yellow. A painting of an island. Hawaii. As she riffs on the things she’s lost, the images she creates spring from imagined danger, a conditioned cinematic response. Footsteps come down an alleyway, knives are sharpened, a clap of thunder. The large rumble of a freight train. Anderson instructs me to wave my arms in front of my face, to do a fake smile just like Jacqui Kennedy suggests: to not use my eyes, so I don’t get wrinkles. In the dark, I do it all. My body can’t resist the words she uses. I feel like she knows me inside out.

I first encountered Anderson when I was about twelve years old in the early 80s. At my father’s property in northern New South Wales, near Kyogle, we’d play music out the open doors so loud it would bounce off the rainforested mountains around us. I’d dance as the moths would fight to get to the light. Dad would choose ‘O Superman’, I’d choose ‘Original Sin’. He’d choose ‘From the Air’. I’d choose ‘Dancing in the Dark’. Used to jetting to visit my father during school holidays, I was never a keen flyer after listening to Anderson. As soon as I heard the pilot say, ‘This is your Captain’, I’d remember her lyrics: the idea of your body, a vessel, falling, being out of control. That’s the trouble with Laurie’s songs. They have words you never forget:

In conversation, performance mode, Anderson talks often of Lou Reed and her terrier Lolabelle. In Language of the Future, she even does a duet with the ghost of Lou on film. He sings while she plays her violin. Drops of moisture glisten on the screen. I have a small jar of men’s tears.

As she recites from the Tibetan Book of the Dead, in another twilight performance, she traces lost souls in the bardo, caught in limbo between death and rebirth. With everything she does, there is a strong sense of shared ritual and the amount of discipline it takes to make the work magnetic, an earworm that burrows into your mind and slyly shifts your perspective — on arts, politics, ethics, philosophy, death, love. At one point she does tai chi on stage, feinting with an invisible partner, raising up the idea of him again, as the names of the movements that she’s taught me appear behind her. Cloud hands. My body remembers them too from her lessons.

Anderson says she loves tai chi in a new town because it’s the best way for her to meet people, to exchange energy with her surrounds and get a sense of the place. It also offers up the opportunity to move through space with instincts more animal than human, and her face lights up when she talks about dogs, when she growls and barks and remembers Lolabelle in the documentary, Heart of a Dog. Originally performed in Sydney in 2010, the idea for a Concert for Dogs comes about from a conversation with Yo Yo Ma. She tells Yo Yo Ma that sometimes when she’s doing a concert she looks out and it seems that most of the audience are dogs and Yo Yo Ma replies that he has the same fantasy. 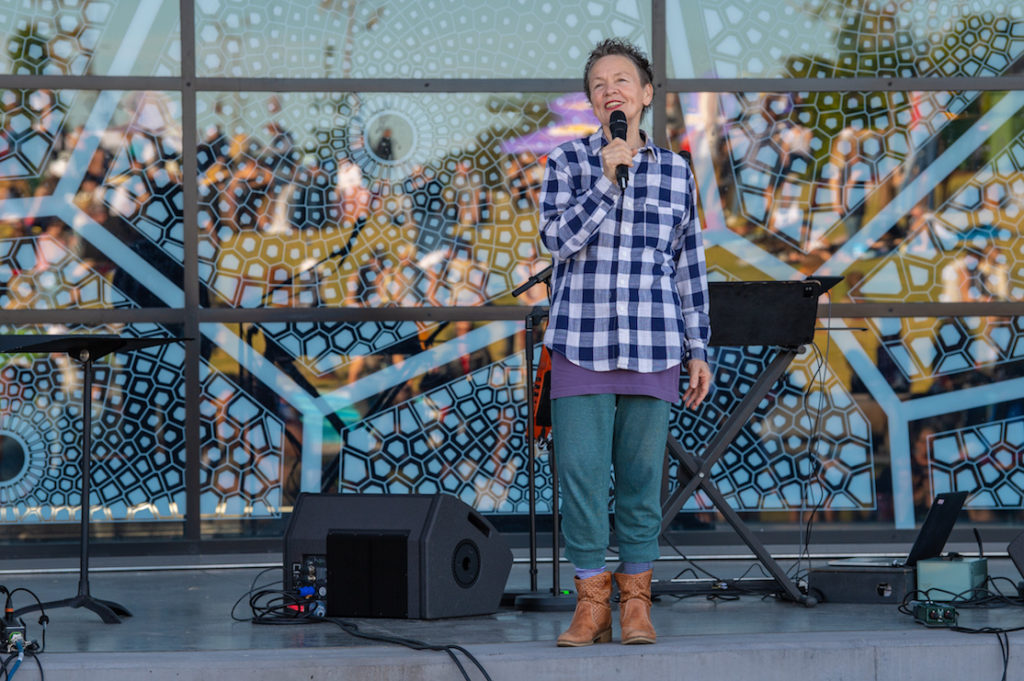 At the Concert for Dogs on the Gold Coast, HOTA’s outdoor amphitheatre is packed with hounds and their humans on a leash. It starts off with areas for small, medium and large varieties, but pretty soon the German shepherds are sitting alongside the terriers and it seems to work. Composing for dogs means no low-end noise, no thunder: And I love bass, I love sub-bass; there are a lot of frequencies that are just cut off.

When Anderson hits the stage with saxophonist, Andrew Ball, it seems more easy-listening for humans, with a dash of Tom Waits thrown in. Given the talk of composing with certain frequencies out of human range, I am alert to the changes in the dogs’ behaviour. But they don’t sit attentively, turn their heads to the side or pluck up their ears. At the end of the concert, when Laurie encourages the dogs to let loose, to howl and bark, the dogs seem reluctant and polite, like when you open the door to a bird cage and the bird stays sitting in there, unwilling to be free. The humans bark and howl on their own.

The dogs didn’t know why they were there, but either do humans, really.
They had this relationship to music that was really kind of pure.

Anderson lives near the Hudson River, on the flood plain. During Hurricane Sandy, she watches the face of her dog as the seawater rises and moves up her street, flooding the basement where her archives are kept. She loses it all.

As she recovers from the initial devastation, she realises there are different ways to lose things, that she likes reading the inventory more than looking at the objects. She makes this re-forming into a book, All the Things I Lost in the Flood, and continues to embody this loss – of lovers, of pets, of objects, of memento mori – in the way her body moves, in the language she makes and the way small encounters filter into her performance:

When something happens, if you don’t scream, it goes somewhere.
The pain encodes, finds a place: the heart, loss; the jaw, anger.

At the start of Language of the Future, Anderson encourages the audience to shriek as loud as we can, replicating Yoko Ono’s scream the morning after Donald Trump is elected. Like the dogs, we seem reluctant at first, polite. But then we howl into the abyss so loud the sound bounces back at us from the stage, disembodied.

Anderson holds up her fingers to count and smiles and breathes us through the sound like a midwife, guiding us in that soft hypnotic voice, releasing the tension in the room before she picks up her violin.

*All italics are the words of Laurie Anderson during her residency at HOTA.

Performances – Sol/Stories in the Dark; Language of the Future; Songs from the Bardo; Concert for Dogs. Talks – Laurie Anderson in Conversation: All the Things I Lost in the Flood. 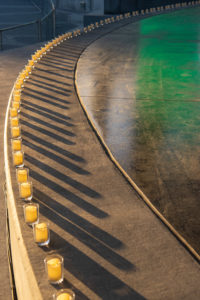 Calling on Paradise – Laurie Anderson at HOTA on the Gold Coast 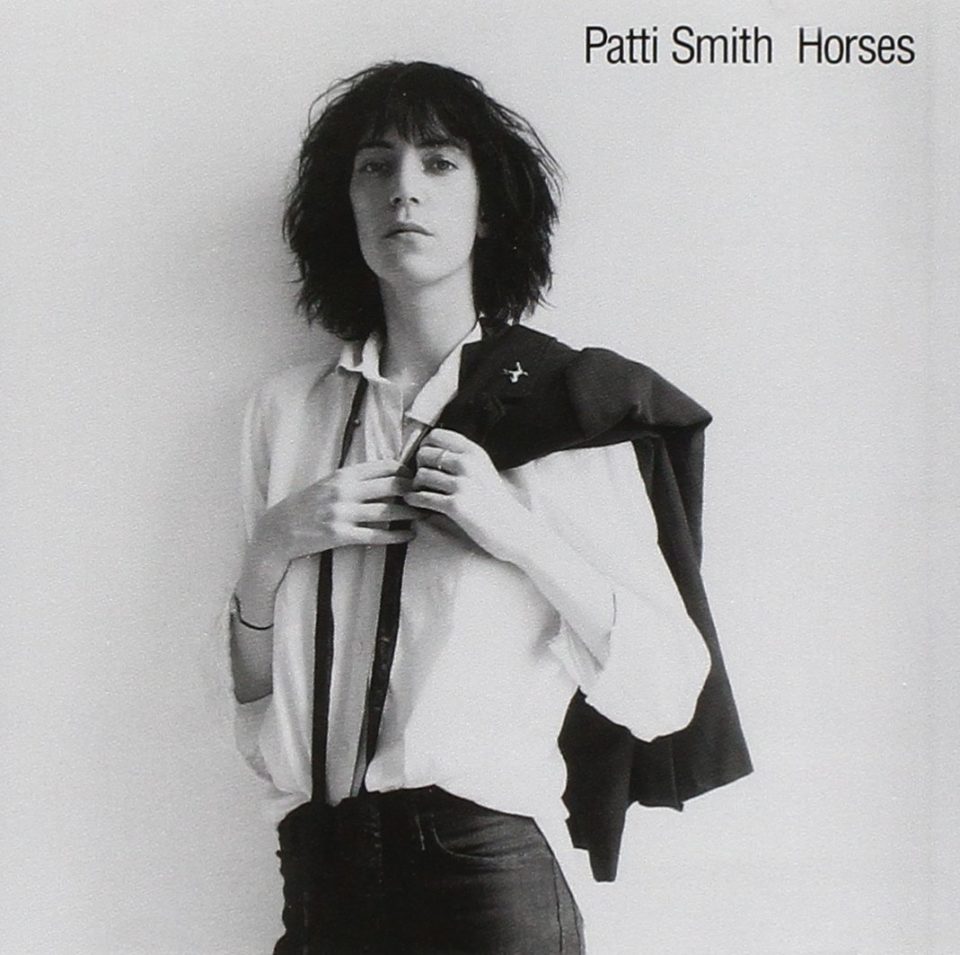 The Sea of Possibilities How Patti Smith was guided by the stars
by Craig Schuftan
“Some of us are born with a certain burning."
Full Article
Issues 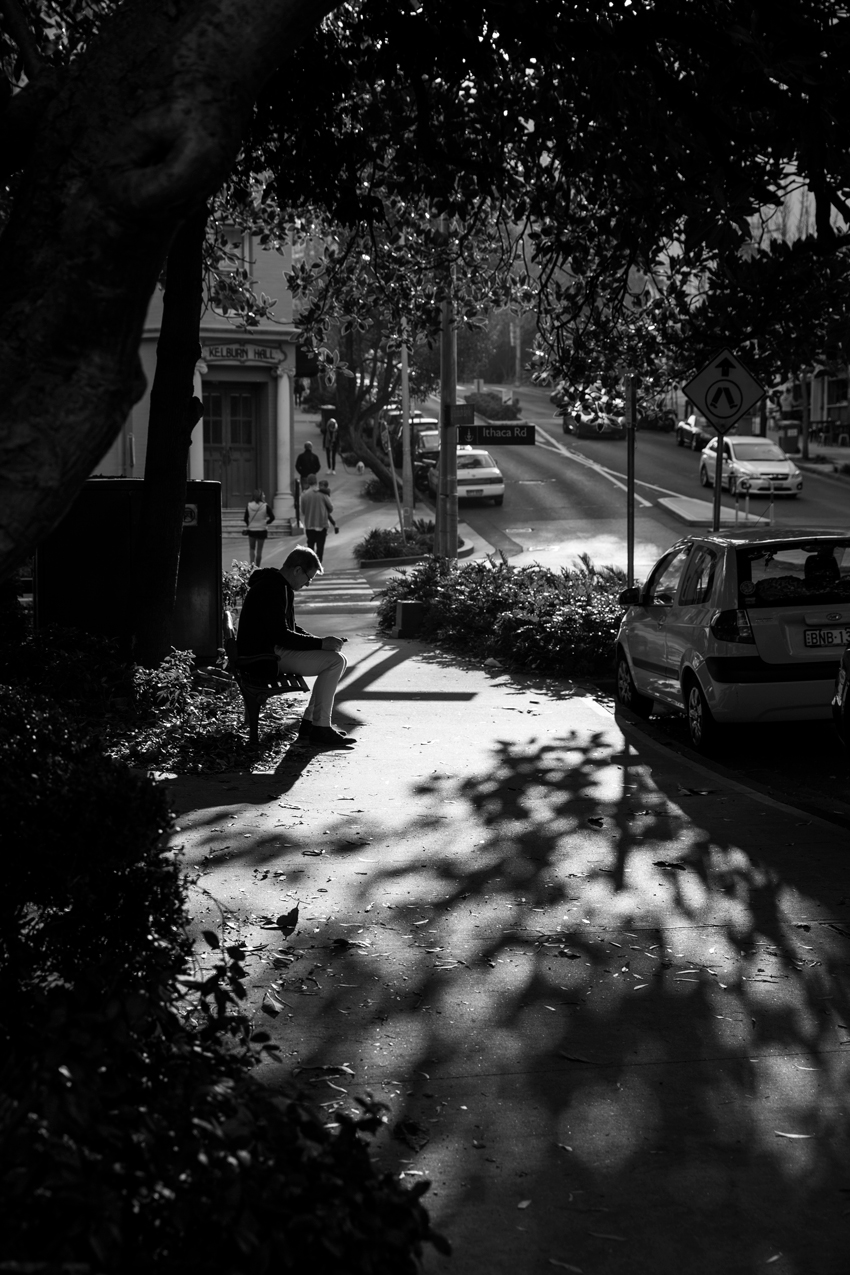 Jasmine and Asphalt A city scented with a season
by Rosalind Thomas
Concrete in the sun has a particular smell, and it’s elemental to the scent of Sydney’s spring.
Full Article
X