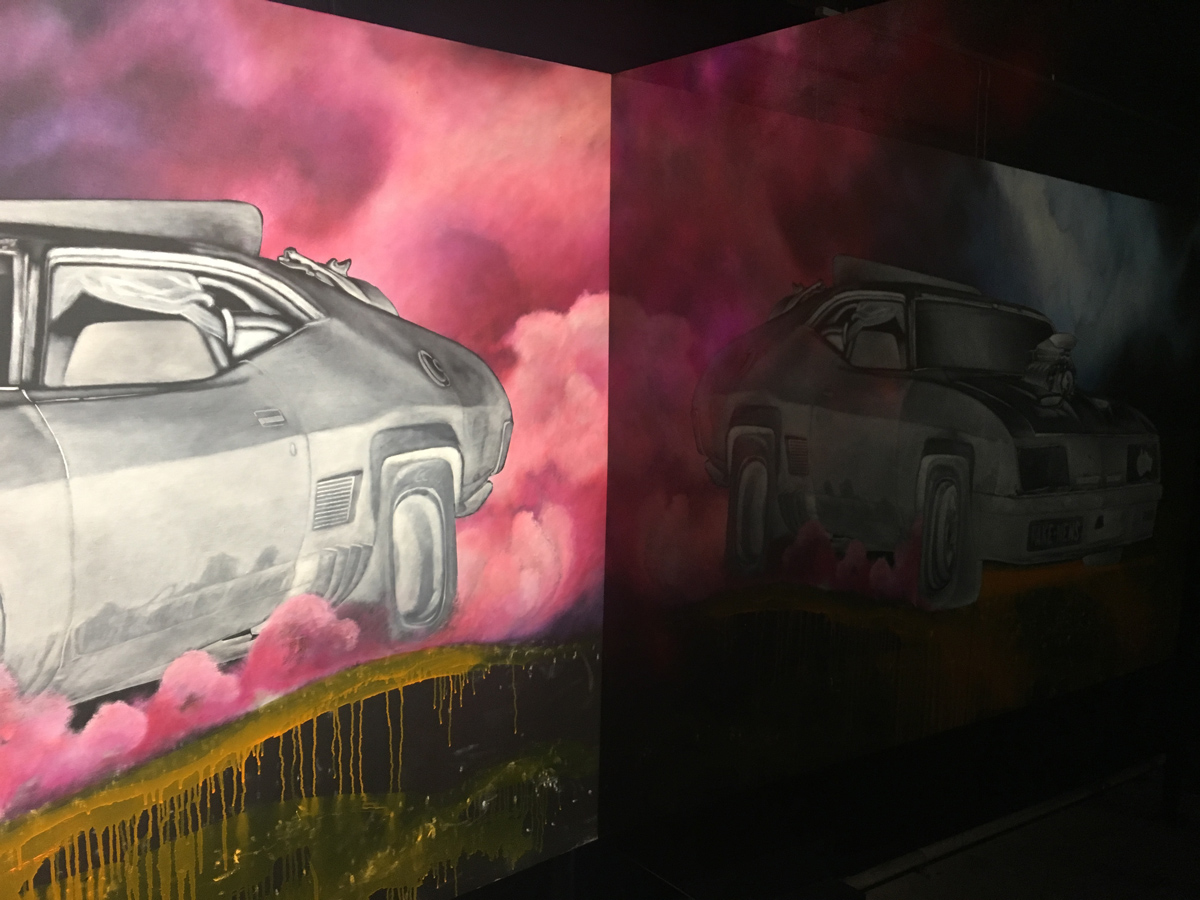 Spaces create stories. In the late 1970s, Sydney’s underground walkways and parking stations were the places where you could experience the stark, modernist spaces of the era’s science fiction movies. 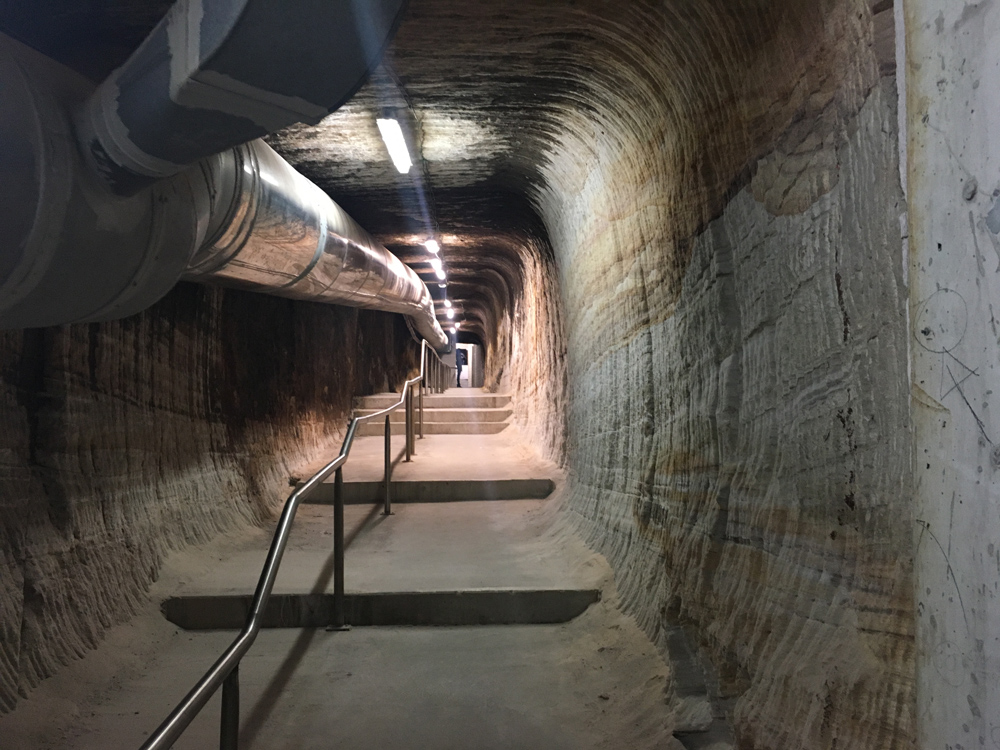 As a teenager, I would find any excuse to ride the moving walkway at the Domain Parking Station, or walk down the then-pristine Devonshire Street tunnel or, best of all, hang around the Sydney Opera House entrance, opportunities to visit places reminiscent of the orbiting architectures of

2001: A Space Odyssey or the white-tunnelled underground city of THX 1138. These were both utopian and dystopian, spaces where you could project your imagination into the future while communing with their eerie presence in the here and now.

Driving down the double helix-shaped underground car park under the Sydney Opera House for the opening of the group show 9 Hours Underground brought those memories back. The sell for the exhibition is that it’s being staged in a rarely opened, artificial cave that’s carved from the sandstone under the Botanical Gardens.

The cave has a low ceiling that’s studded with stalactites formed from the drip of water seeping down from the gardens far above. Its ceiling was originally sprayed with concrete that, over the decades as a part of the air circulation system for the car park, has turned car-exhaust grey. Tonight, there’s a jazz band, a bar, artists, collectors and punters. Along the curved sweep of a wall painted dark blue, art has been hung, and here and there are some sculptures and a couple of video works. 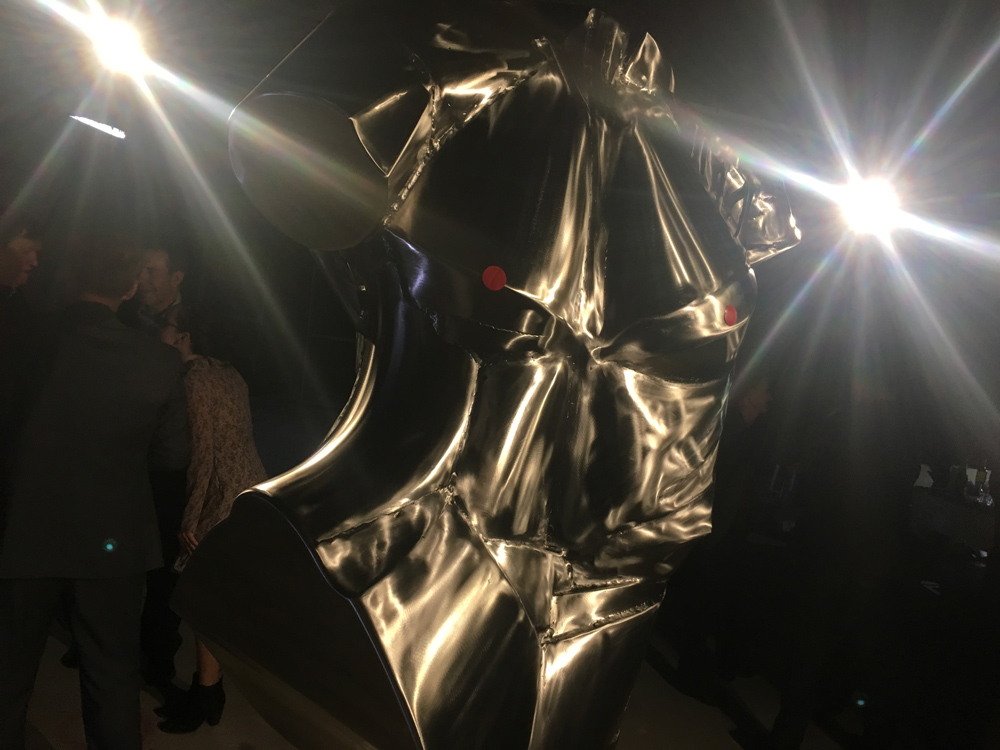 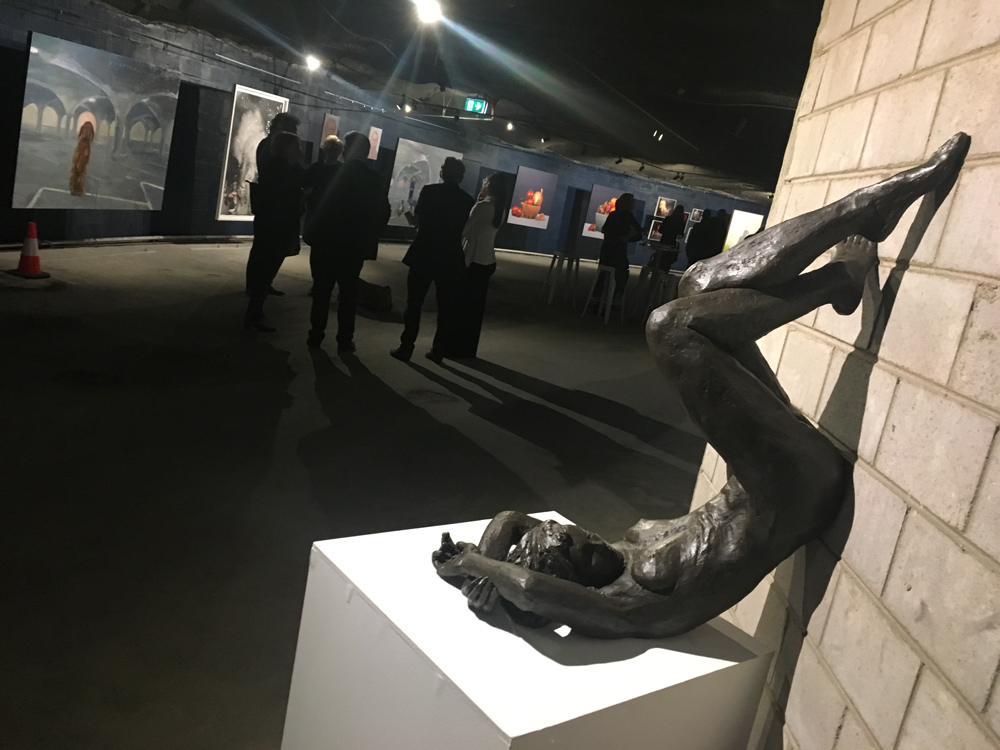 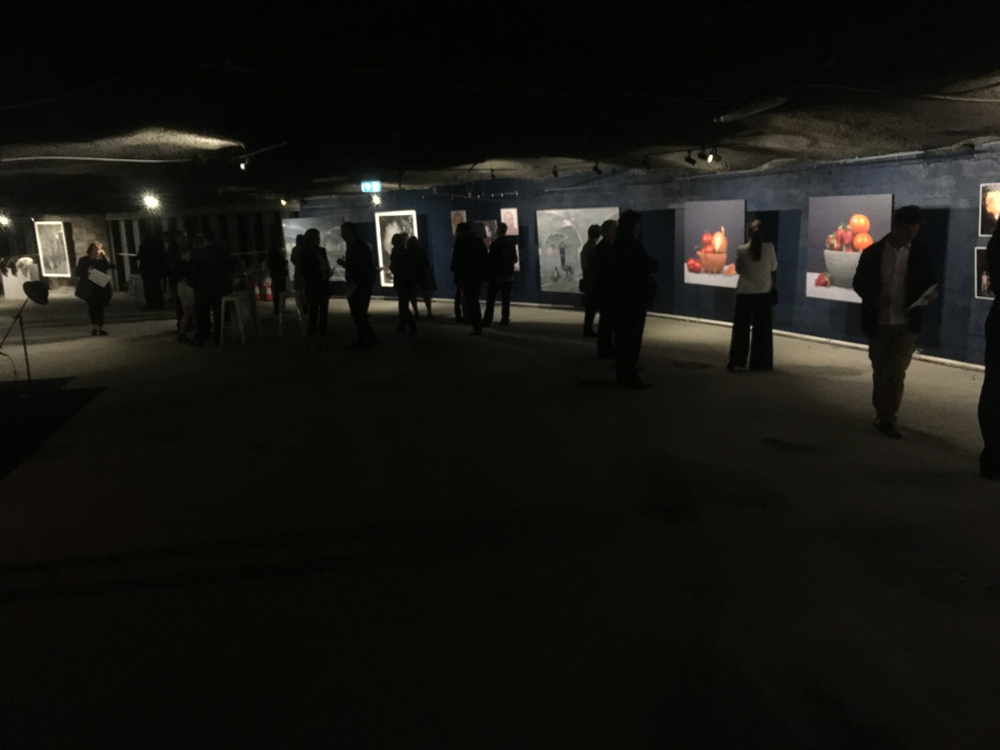 Curated by Kate Smith, the show is a collaboration with Wilson Parking, and the commercial galleries representing the artists. This is the curator’s third car park project, after two previous exhibitions in North Sydney and Newtown that featured local street artists.

As a collection of art that I had been told was intended to ‘work with the space’, it’s an eccentric line up. Some artists, such as the sculptor Robert Hague who produced Colossus, a shiny, stainless steel torso specifically for the show, and Giles Alexander, who selected some already extant but non-typical paintings of cars and industrial vehicles for inclusion, have work that naturally fits into the ambience of the space. Jose Luis Puche has two oil-pastels in the show, one of which, Gallery, a drawing of empty picture frames lent up against a gallery wall, hangs between steel funnels and a ribbon with the surnames of artists stencilled on – Warhol, De Kooning, Cullen et al. – that’s threaded across the spines of obscure metal-encased shutters that circulate air.

The ribbon turns out not to be a part of a work as such, but a soft protection against possible danger of the ventilation machinery. If only by accident, this and Peter Wegner’s self-explanatory painting Lost Dog in a Car Park – are the most explicit engagements with the location. There’s also some works by some very good artists, including Alan Jones, Nick Collerson, Damien Shen and David Eastwood, that seem completely disconnected to the space. Some pieces, such as Monika Scarrabelotti’s Alice – a sculpture of a female nude leaning up against a wall – benefit from the sheer strangeness of the juxtaposition. 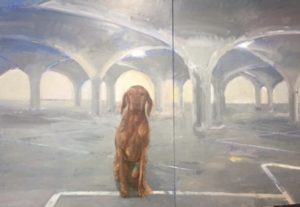 None of this really matters, not for the artists, nor the curator, or Artesian4, the creative startup that has staged the show to offer exposure to artists while giving punters a novel, but non-intimidating art experience.  What it’s all about at the opening are sales and, where there are no actual walls to place red dots, SOLD is scrawled on the concrete floor in chalk. By my count, at least half the show has been acquired an hour into the event.

It was at about this point I wondered, perhaps reflecting on my teenage fascinations, how long we might survive down there if we were trapped by a cave in, or sheltering after an unexpected North Korean nuclear attack. The bar was well stocked with wine and beer, and although the opening was for strictly limited numbers and never more than half full, if we were forced to become cannibals, there were at least some tasty looking businessmen.

The more serious question however was, in the event of apocalypse, what would this selection of art tell the future about who we were? My unsurprising conclusion was that the value of art is, of course, entirely arbitrary, yet context is everything. Just as the paraphernalia of medicine or religion takes on different meanings in a hospital, or a church, so too art feels different outside of a gallery. Suddenly, it just becomes a lot of… stuff. 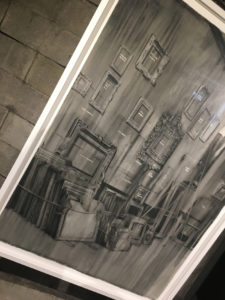 Looking at the work, and wondering how it might be deciphered, I recalled how, in all those films of distant locations and spaces, escape was the end of the story – escape through the psychedelically coloured hyperspace of

On the way out of the Opera House’s underground car park, I became lost. I retraced my steps several times trying to recall if I had parked on 2 or 3, and the arrow on the floor was pointing in the wrong direction, uphill instead of the downhill I had encountered on the way in. I found a set of stairs and discovered that there is a Blue 2 and a Red 2. I found my car, and driving through a tunnel emblazoned with pink light, I drove out into the night.

Tickets to 9 Hours Underground will be free but limited. Keep an eye on www.artesian4.com for information about how to attend this unique exhibition experience from Monday 25 to Friday 29 September.

A Ghost Story Taking the life-and-death pulse of separation
by Lauren Carroll Harris
'A Ghost Story' does something new: it takes a ghost as its subject matter and its central character. It isn’t about demons or malevolence, but loneliness and wonder.
Full Article
Culture