“Redfern has always been in the news for bad things, but I’ve only seen good things,” Raymond Finn says, squinting in the sun as he applies more brush strokes to a brick wall. “Art like this one is a great thing.”

Finn is from near Cooper Pedy, South Australia. He remembers his 1997 arrival in Sydney by train. The ‘40,000 Years’ mural opposite Redfern Station was the first thing he saw. “But you could hardly see it [by then] – the paint was wore down, it was scraped and falling to bits.”

Today Finn is hard at work on its restoration. An estimated 64,000 people a day use the station, passing by Eveleigh Street and ‘The Block’ with all its history. Lifting up his brush, Finn pauses. “The cultural significance of this place to all Aboriginal people, it’s iconic.”

Originally created in 1983, the mural was designed by the artist and filmmaker Carol Ruff. Enlisting a team that included artist Tracey Moffatt and members of the local Eora TAFE college, it has long been a welcoming point for Indigenous peoples coming to the area.

It stretches the length of the railway bridge, its powder blue colours playing backdrop to a litany of Indigenous pride. The Rainbow Serpent bares its fangs at one end, as Aboriginal feet take their first steps onto the Australian continent. At the other, the Redfern All Blacks (winners of the 1979 NSW Aboriginal Rugby League Knockout). There are also the darker moments; a child stands alone in front of a church mission. A symbol of the Stolen Generations.

The mural is named after Murri musician Joe Geia’s lyrics, which sit directly opposite the northern entrance to Redfern Station: “40,000 years is a long, long time… 40,000 still on my mind…”.

“The north entrance to the station used to be the only one,” says local Sydney activist and muralist, Jason Wing, who is part of the restoration project. “[The mural] communicates ease, pride, familiarity – a pride of place.” But after 34 years, the paint was cracking. Words were faded. Low grade tagging, popping like an insistent species of mould.

“It was irresponsible to let the mural decay for 34 years.”

Wing says that at one point even the Rainbow Serpent was in danger of being graffitied. “Some people say that a community member had misinformed others about the Serpent’s head – saying it gave bad luck,” he says. “The Serpent is a larger symbol for the Aboriginal people and no one has the right to vandalise it.”

In 2013, local Desley Haas of the Redfern Station Community Group (RSCG) approached NSW Rail Corp (who own the land and wall on which the mural is painted) about restoring the mural. Since then the City of Sydney has contributed at least $48,000 to the project.

When putting together the restoration team, RSCG has sought to reflect the make-up of the mural’s original creators – including the original artist Ruff, local Indigenous artists, and students from the Eora TAFE under the teaching guidance of Chico Monks. Haas steered the RSCG over the five years it has taken to realise the project.

Jason Wing says that “what differs this time is there’s a sense of actually recreating history or contributing to history and that’s been a common feeling from the artists.

“We’re contributing to something significant, which the first guys painting the mural, I don’t think they would have realised the power and the significance and relevance historically for this mural. And it’s even more important now because of the gentrification of Redfern because you know it shows now that there’s a lack of Aboriginal presence in Redfern whereas this used to be the hub.

“The bit that really gets me is the church mission houses,” he says. “They were painted by Joe Hurst, a pretty well known male Aboriginal artist. I was watching Joe paint that and it was haunting absolutely haunting. It was really spooky actually. And I look at the removal of Aboriginal community and the communities and watching him paint them and it’s like well, is Redfern just the modern day mission?”

Relying on original photos, Richard Lucas – a “master copier”, according to Wing – used a gridding system to map out their approach. Lucas tells me, “One woman walking past said it was a childish work. But I think that’s irrelevant. It’s important to community as a whole and to bring community, locals, original land owners together with this landmark work.”

On the day I visit, Lucas and Finn are working on thick waves of dark colour at the top of the mural. “The stories here connect people to people – and to country,” Finn explains. “This story gives gives us a bridge to the south coast, the north coast and to where I come from.” 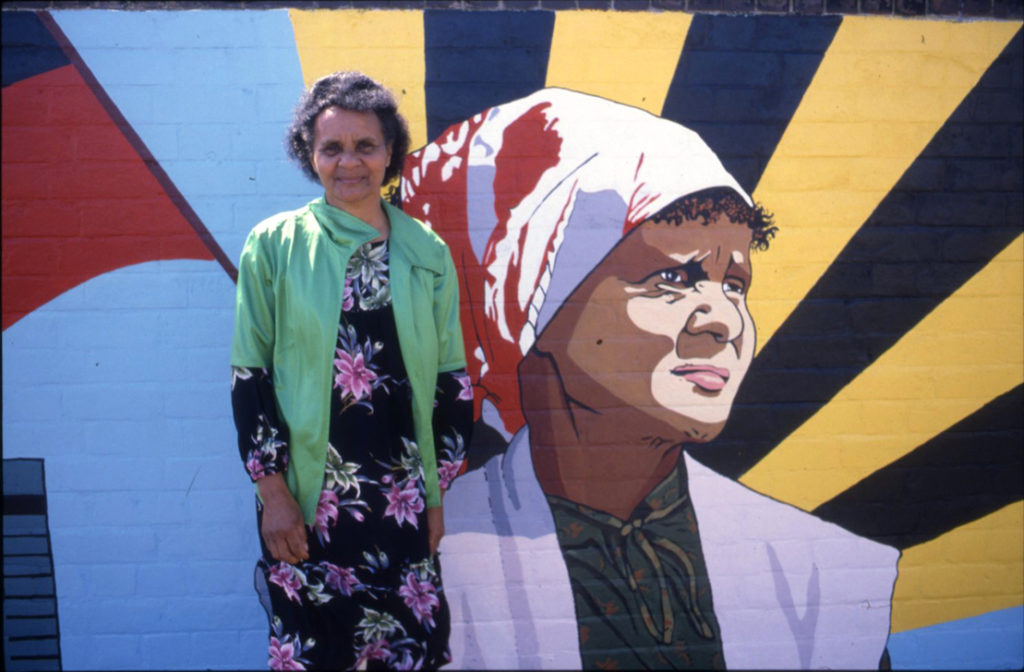 Finding Another Register Albert Namatjira’s copyright
by Martin Edmond
The campaign to buy back the rights to an artist’s work.
Full Article
Culture 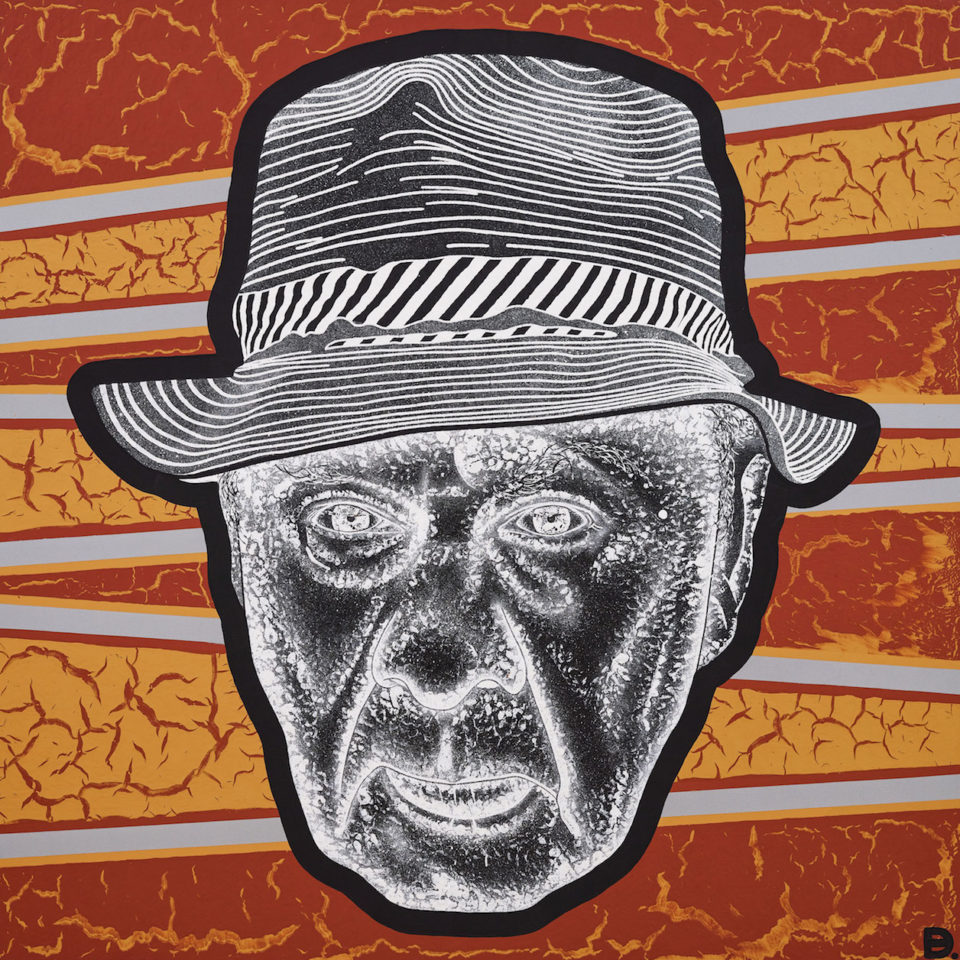 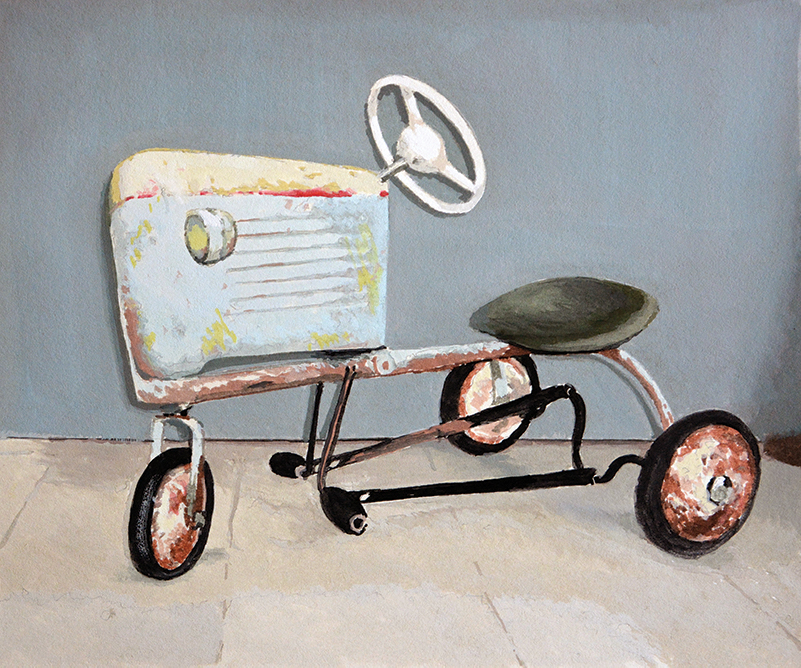 and my heart crumples like a coke can
by Ali Whitelock
you died the tuesday after valentine’s day. valentine’s day was on the friday. stephen hawking had motor neurone disease too. his is different to the kind you had. there are four different kinds. yours was diagnosed the day you died. you were already dead.
Full Article
X