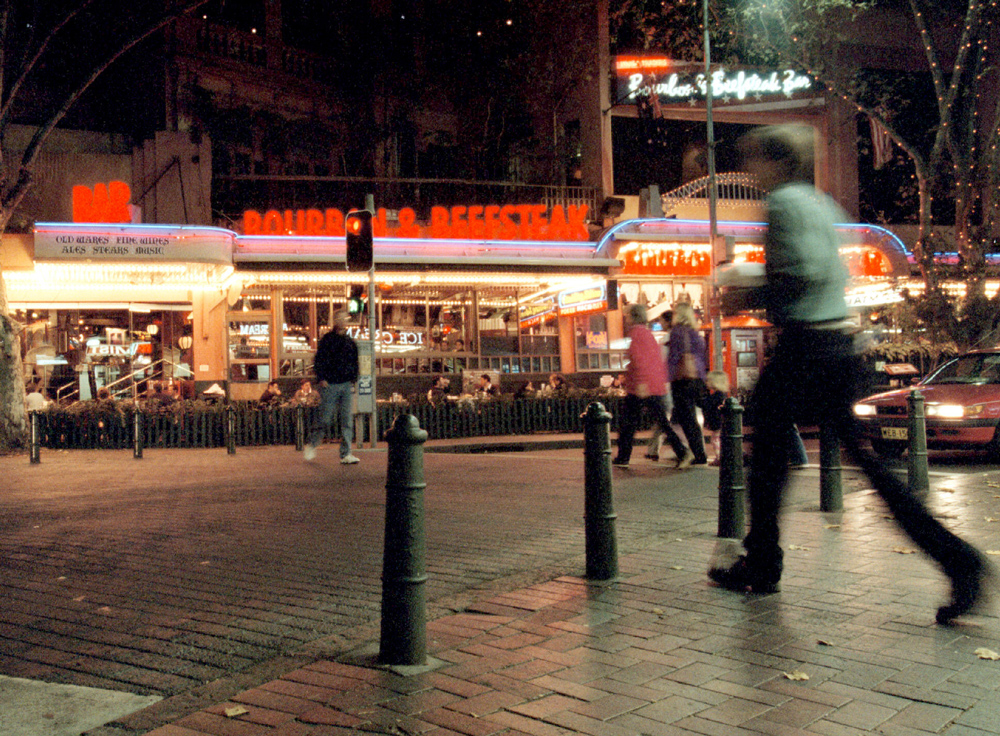 Andrew Woodhouse, a longstanding Kings Cross local, didn’t mince his words. A leech-like building that would suck the soul out of its urban context is how he described Piccadilly Property Trust’s audacious bid to bulldoze much of the old Bourbon and Beefsteak along with several other historic buildings on Darlinghurst Road – including the recently re-opened Fountain café. Judging by the 500-plus objections from residents to the City of Sydney over the gob-smacking proposal, many concur.

Developers versus residents. Such an age-old story. Such a Sydney story. But this one’s hit a nerve. Few, it seems, ever imagined a threat to the 1880s Bourbon and Beefsteak building. It’s white arches signal a colourful history – first as an R&R destination for American GIs during the Vietnam War – run by an American businessman with CIA links – then as a popular lunching place for corrupt detectives in the eighties. In 1999 it was the drinking hole where the young Australian cricketer Ricky Ponting famously copped a bruiser during a night he could scarcely remember before he went on to redeem himself and have a stellar career.

Before the place was renovated in 2000, who, among us, didn’t go there for a last drink when everything else was closed, relishing its trashiness and the stories of its seedy past?

Woodhouse, the president of the Potts Point and Kings Cross Heritage and Residents Society, was one of hundreds of fired-up locals at a recent public meeting in Elizabeth Bay. It was organised by Concerned Citizens in association with the 2011 Residents’ Association. Proceedings kicked off with the meeting’s convenor Helen Crossing delivering two very different apologies for not attending. Louis Nowra, the Kings Cross precinct’s pre-eminent flaneur and lover of old Kings Cross, had sent his. Citing holidays and people being overseas, so too did a representative of development and hospitality group Iris Capital.

Opposing the shock $47.5 million development application was a diverse mob of professionals, artists, media types, single people, parents, retirees, state government and council representatives. The developer had launched the application just before Christmas when most of us had our minds elsewhere. I was at the NSW Central Coast. Read about it in the paper.

18 January proved an unpleasant awakening from the summer holiday torpor. It was packed and uncomfortably humid inside Elizabeth Bay’s Reg Murphy Centre on Greenknowe Avenue. A familiar and weary cynicism laced the air. It reminded me of the true-events-inspired 1982 noir film Heatwave in which a Sydney summer storm played metaphor to the roiling tensions between the very same precinct’s local residents and the march of big money development around Kings Cross in the 70s. The film starred Judy Davis as a patrician activist.

Something had to break back then. In real life, it had. The anti-development heiress Juanita Nielsen disappeared in 1975 and is thought to have been murdered. I once asked a retired cop who’d worked in the area what he thought happened to Nielsen. “She wouldn’t fuckin’ shut up,” he replied.

Much of Kings Cross looks the same today as it did in the film, from what I recall. The Coke sign, The Bourbon (and Beefsteak), The El Alamein Memorial Fountain, the clubs. And while there’s no suggestion the current proposal has involved any malfeasance or intimidation of opponents, once again, more than four decades after Nielsen disappeared, we’re fighting for the best of the area’s unique history and character to be preserved.

This latest plan would see the large site on Darlinghurst Road – from the Fountain café to the Empire Hotel – redeveloped, its lower levels into a “beer barn” with gaming facilities, according to another of the area’s prominent locals Dr Gavin Harris. He questioned the developer’s aesthetic competence. Two adjoining bars for 1,000 drinkers, topped with 83 “box style” apartments along with 101 car parking spaces in the basement levels would be delivered under the proposal. No mention of affordable housing or public art.

Andrew Woodhouse said the buildings now under threat were part of the Kings Cross precinct’s “rich history, the important story of our past”. Dr Harris said the DA misrepresented Potts Point by claiming it to be an entertainment, retail and commercial precinct without saying that it is also one of Australia’s most densely populated residential areas. The crowd breathed in heavy agreement. A man bounced a baby on his lap, its small hands reaching to touch the drop-in centre’s cloth-covered billiard table.

The Fountain café, the Fountain pharmacy, our yoga school the Fountain Medical Practice — the only clinic said to offer home visits for local seniors. All would go. What we will get in return from this redevelopment seems pointless to ask. The terms “village atmosphere” and “boutique lifestyle” are being bandied about to the mirth of residents fearful the development will deliver their opposite.

Those of us who live here know Roslyn Street well. We duck up and down it all the time. The developer’s plan says the 101 extra cars proposed to be housed in the new construction will exit the new building in tiny Barncleuth Lane on to Roslyn Street and into Darlinghurst Road. Thing is, Roslyn Street is one way. And it goes the other way – into Ward Avenue. You couldn’t fit two cars going in opposite directions on that current little crooked broomstick of a throughway. How would it work with the comings and goings of 101 additional ones?  Do they plan to widen Roslyn Street and Barncleuth Lane? Details for later, I guess.

The developer was unavailable when Neighbourhood contacted its office seeking a comment for this story. Fairfax Media has previously reported that those behind the plan have described it as a massive revitalisation of a “decaying” part of the city, which would be transformed into a new food and entertainment complex featuring laneways and luxury apartments.

Towards the end of the residents’ meeting, another voice of support for the development came from Louise Shepherd from the Potts Point Partnership, a group representing some of the area’s local businesses. The changes would bring vibrancy to the streetscape and would benefit the business community, she said.

How do decisions on major developments that change the shape of our city get made? Sydney City Councillor Jess Scully told the meeting the council would not be “rubber stamping” the development. This DA was set to be one of the first to be examined under the state government’s new system of Independent Hearing and Assessment Panels (IHAPs). Panels of three independent expert members and a community member who assess development applications made to local councils under $50 million. That this DA scraped under the $50 million threshold by a $2.5 million whisker was seen by those at the residents’ meeting as no coincidence.

According to the NSW Government’s Planning and Environment website, “IHAPs are to be put in place so that the process of assessment and determination of development applications (DAs) of high value, corruption risk, sensitivity or strategic importance is transparent and accountable.”But as Councillor Scully admitted, “It’s anyone’s guess how IHAPS will go.”

At the time of completing this story, it emerged from sources close to the process that the DA will now be sent to an independent quality surveyor who will check if its less-than-$50 million costings are accurate. This, in turn, could mean that the most radical changes proposed for Kings Cross in 50 years will now be assessed under a different, arguably more stringent, consent process. The Central Sydney Planning Committee, a separate authority made up of councillors and state government appointees, handles cases above $50 million that are perceived to be more complex.

The community leaders who spoke at the residents’ meeting urged us to file our objections to the DA as soon as possible. I got mine in a couple of days before the 24 January deadline. I wondered how many others among the estimated 300 people there that night had time to compose theirs. Because time was never on our side.

If all goes to the developer’s plan, its new “village” version of Kings Cross will be in place by the time the bouncing baby at the residents’ meeting starts school. If not, a new generation could inherit a Kings Cross precinct that’s been thoughtfully cared for and retains the charms of its raffish past.