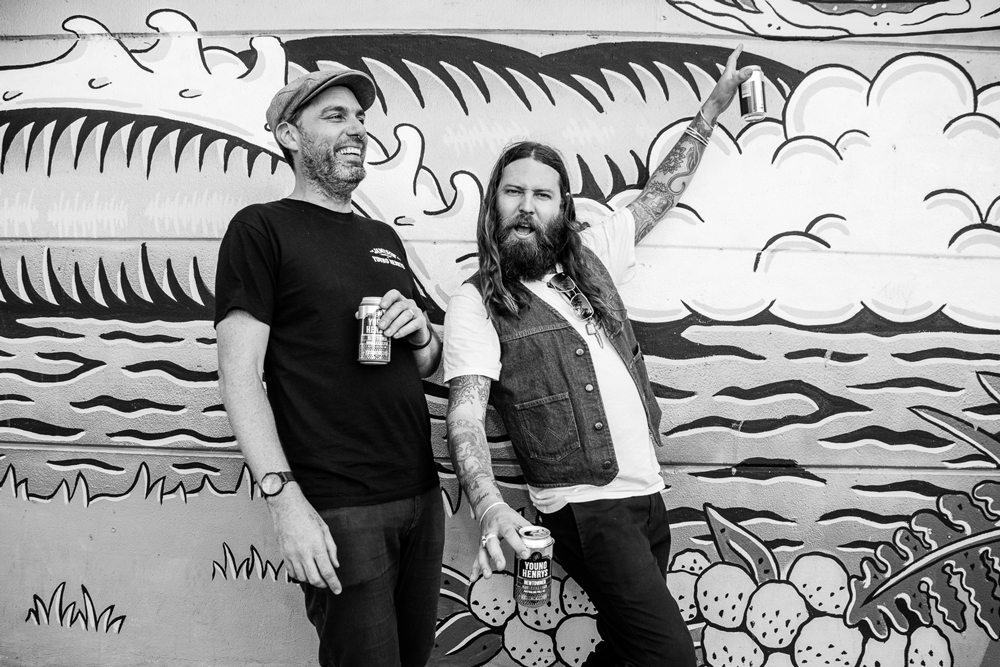 Looking like a member of Stillwater, the fictional band in Almost Famous, Oscar McMahon stands astride the steps above the Courthouse Hotel beer garden. Like Billy Cruddup’s character in Cameron Crowe’s homage to the heyday of rock excess I expect Oscar to scream, “I am a golden god!” before diving into the crowd below. 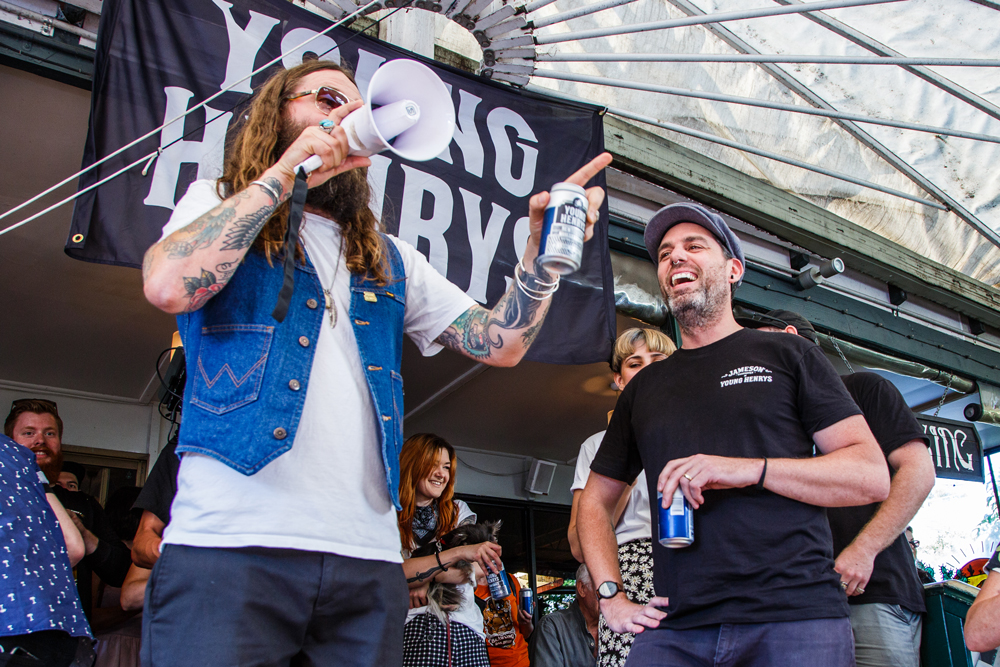 Instead McMahon flings them tinnies of Newtowner, as do his assistants in the crowd, before giving precise instructions on how the Big Tinnie Crack will flow. This is Newtown brewing’s heyday.

McMahon proclaims through a megaphone, “Young Henry’s are very proudly Newtown, and thank you so much for supporting us and for supporting this beer which is our present to our hometown.”

Then the ‘rules’. “Very, very strict rules. We are going to count three, two, one, crack!”

I hear a, “No, not yet!” and a ‘crack’ in the crowd as one overexcited fan is premature in his adulation.

Like Lennon in Swinging London, Dylan in Greenwich Village, or Manson in Death Valley a Newtown beer garden is McMahon’s fiefdom. Newtown, in the form of the Newtowner tinnie, is what McMahon’s company Young Henry’s sells, and it’s selling well.

As Oscar McBlack, McMahon (35) tasted rock n’ roll success as a member of the Hell City Glamours, touring the US and supporting Alice Cooper, Paul Stanley and the Angels amongst others. However, he was working bar at Freda’s, Chippendale, six years ago when the idea of birthing a micro-brewery with two mates, Baron’s Brewery founder Richard Adamson and Dan Hampton formerly of Little Creatures, was born. McMahon swears they didn’t have anything like a business model.

“Young Henry’s has never had a plan. We are at the moment working on our first ever year-in-advance marketing plan. We just kind of make things that we like and ask our friends for honest feedback.” 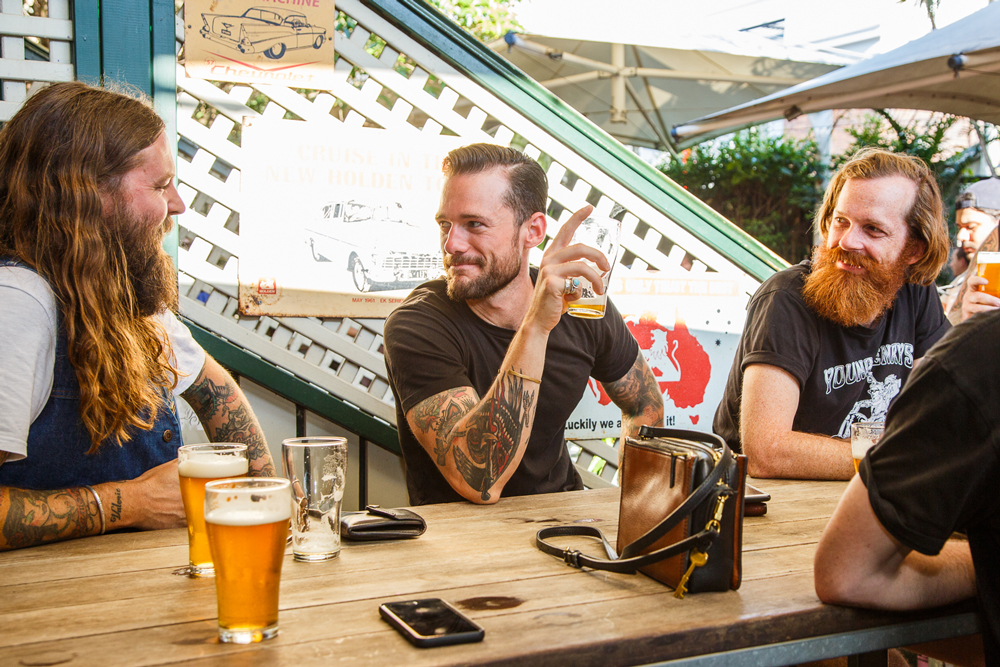 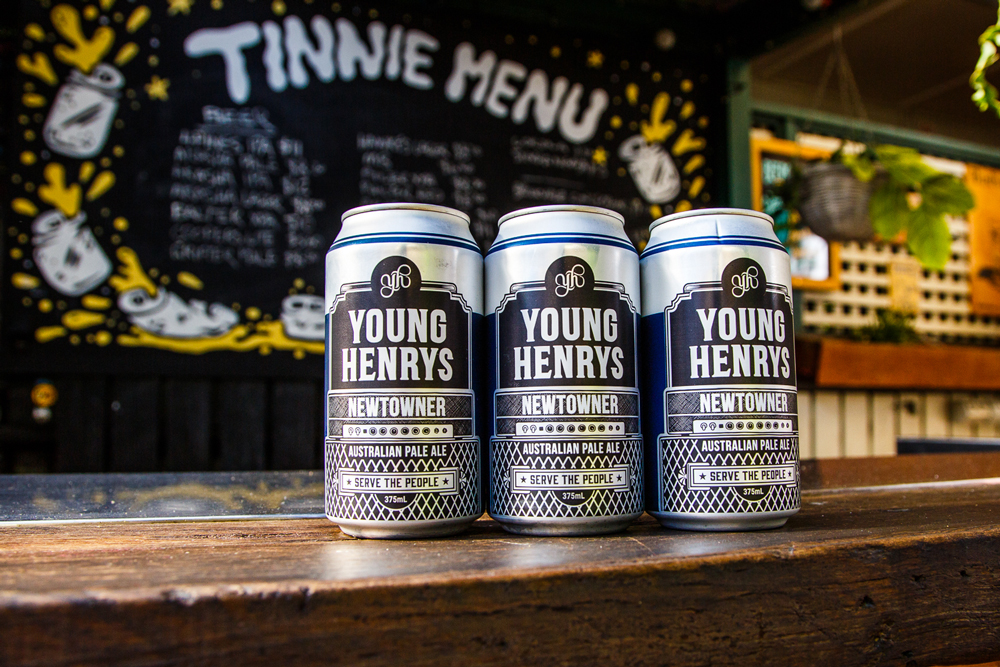 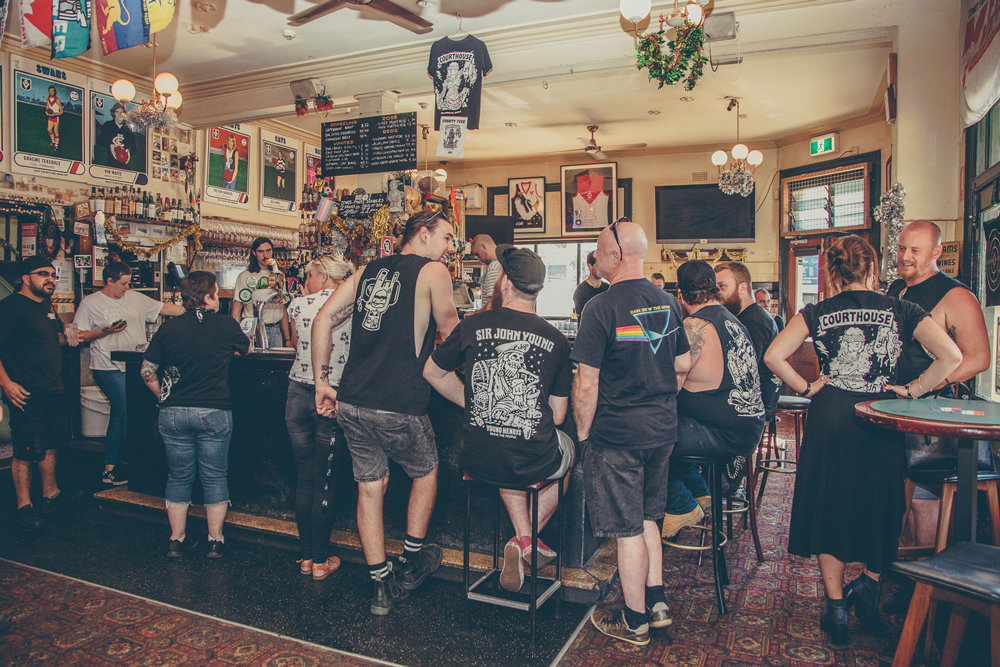 Less than a year later a special event drove them to create the beer that would become their flagship.

“The idea was to brew a beer as a one-off to celebrate the [2012] sesquicentenary (150th anniversary) of Newtown. We approached the guys at the Courty because we thought what is the quintessential Newtown pub? It’s the Courty, so we said we’re making this beer would you guys be interested in putting it on tap for the party?

“We sold out our whole batch of beer in under a week, and we’d never done anything like that. So we started making this beer and we were only allowing it to be sold within the 2042 postcode, and that was basically because we couldn’t make enough of it to serve everyone within Newtown anyway. It got to the point where publicans were coming into Newtown, trying it and going we want that beer, and we were saying, ‘No’ to potential customers because you’re not from Newtown.

“It was my wife who said, ‘That’s not very ‘Serve The People,’ which is the Young Henry’s motto.”

So it was a kind of Newtown Apartheid?

The craft beer scene of inner-western-Sydney has exploded, the current stable including Wayward (Annandale), Batch (Marrickville), Grifters (Enmore), Rocks (Alexandria) and Willie The Boatman (St Peters). However McMahon says Young Henry’s are outsiders in this world.

“We opened first and we’ve always focussed on making sessionable, easy-drinking beers, not doing overly-crafty things that you can only have one or two of. That has always been our point of difference. When we first started a lot of people in the ‘craft’ world were saying, ‘Oh it’s not really craft because it’s not hoppy enough.’”

As Courthouse publican Dean Bruce says of Newtowner, “It’s not too challenging in the way you’ve got to decide what hops is being used. You don’t have a whole conversation about the beer.”

Perhaps what they’re really selling is not beer but Newtown as an idea. Newtown as brand. A Newtown that may no longer exist. As Newtown moves out of reach of bohemian renters this becomes as incongruous as the version of the Courthouse forever captured in the ABC’s 2001 series

Nonetheless, it’s a version of Newtown that still exists in the minds of bored suburban teenagers looking for escape – if only through tinnies of Newtowner at their local. Although perhaps some publicans want nothing to do with a bunch of Newtown hipsters?

“Oh yeah, we’ve heard it all,” says McMahon. “It’s really funny, people only ever use the word hipster as a negative thing now. It’s a dig, a jibe. I think the word hipster now says more about the person using it than the person they’re describing. Because they’re usually describing someone younger and cooler than they are. In the 60s The Stones were hipsters, right?”

He’s right – hipster originally referred to 1940s jazz musicians, then 1950s beatniks, before contracting to ‘hippie’ in the 1960s. Although all these terms were also used negatively by many mainstream ‘squares’ of their day.

I suggest to McMahon that if he really wants to capture todays Newtown perhaps he should flog a beer-flavoured frozen yoghurt sold through Thai restaurants?

While rumours abound about Young Henry’s selling to what McMahon calls ‘Big Beer’, he insists he has no such plans.

“If we sold Young Henry’s I’d be selling my job. I’d be selling something that I truly love and I would have to sit back and watch someone else fuck it up, and that’s not cool.

Real(i)ty Bites Newtown’s knowledge class illusions
by Helen Razer
Newtown is like a real-life Facebook feed: we all agree on important moral matters, and only the foolish dissent.
Full Article
Issues
Correspondence 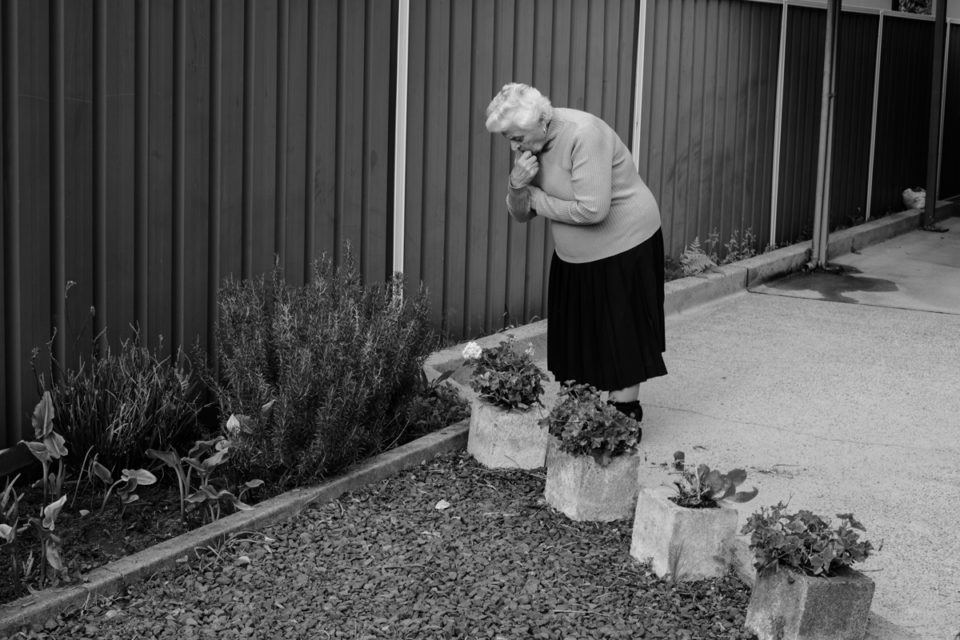 Evergreen Every weekend, a small army of volunteers dig below the surface
by Caroline Baum
The delights of working in other people’s gardens.
Full Article
X