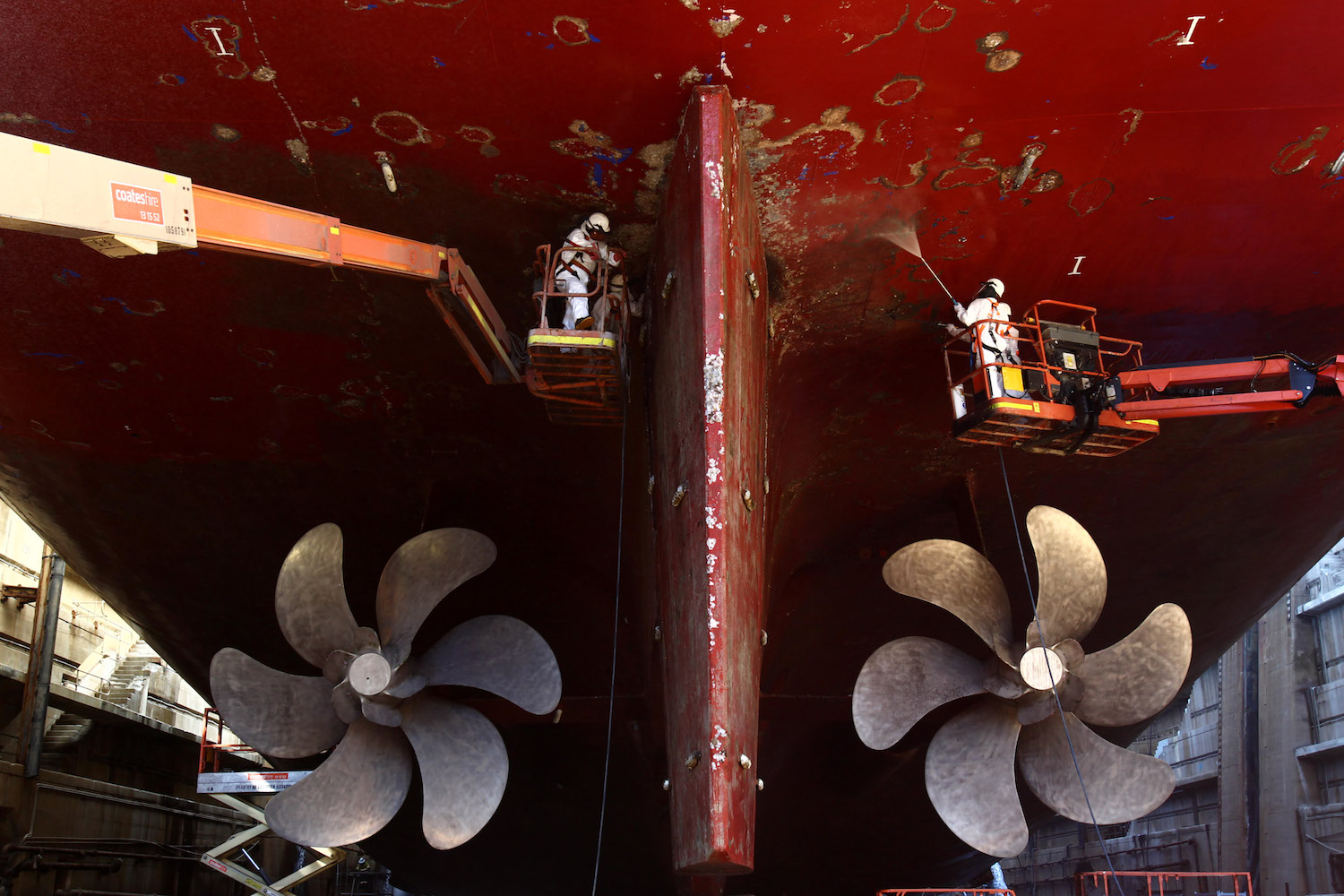 In the predawn darkness of Blackwattle Bay the smell of diesel and cigarettes competes with the raw ammoniac taint from the Fish Market, where trucks and forklifts are already circling each other in the crowded car park. On the ferry wharf deckhands are coiling ropes and cable, checking off maintenance jobs or carrying cartons of booze aboard their boats.

The backup generator aboard the Arafura Pearl is the loudest thing in earshot, the dull roar of the Hanson Concrete site across the bay just cutting through. As the Arafura Pearl casts off for its early morning run to Manly the skipper keeps one eye on his navigation screens and the other on the kayaks skating around the water.

Those kayaks and the platoons of joggers on the shore are the first harbingers of the residential boom that’s eclipsing Sydney’s working harbour. But the looming high-rises of Pyrmont silhouetted against a crimson sunrise leave no doubt.

The entire Fish Market site and all its working wharves are soon to be displaced by up to 2,760 new apartments and moved to the current Hanson Concrete site. Hanson Concrete will be shunted on to Glebe Island, where residents of Pyrmont’s new apartment blocks are up in arms, having just realised the island has been zoned waterfront industrial for about 100 years. It will soon potentially see 24/7 activity from a new maritime loading facility planned there.

This is at the behest of the Urban Growth Corporation (UGC), the weaponised development arm of the state government. Its job it is to transform the 5.5 kilometres of harbour frontage known as the Bays Precinct (encompassing White Bay, Glebe Island, Rozelle Bay and Blackwattle Bay as well as the former rail yards west of Glebe Island) into “a bustling hub of enterprise, activity and beautiful spaces”.

Their remit also covers the Harbour’s waterways currently used by visiting cruise ships and tankers, fishing fleets, yachts, refuelers, tugs, barges and ferries along with all the maintenance craft that remove floating garbage, transport raw materials and repair docking facilities. And with the abundance of new waterfront residential proposals, including one for Glebe Island, the question has to be asked – has the state government really thought this through?

Without a working harbour Sydney’s roads will become more congested and dangerous. Raw materials for the endless CBD building boom will have to be trucked in. The ubiquitous apartment infestations that are fast blanding the suburbs into dystopian carbuncles will grow to the shoreline. Many jobs will be lost, along with the unique character of this harbour city.

UGC seem an opaque organisation – requests for interview were met with bland mission statements; in this case: “The Bays’ west area is envisaged as a mixed use precinct with a focus on high value ‘jobs of the future’.”

Their press blurbs claim planning includes the needs of a working harbour, but Sydney activist and one-time mayor of Leichhardt Maire Sheehan begs to differ.

“We’ve had seven master plans for the future of the harbour over the last 20 years. In the Bays Precinct there’ll be much more intensive development and it won’t be a working harbour, it’ll be a tech, commercial, restaurant and residential transformation plan. The only working harbour likely to remain will be in Rozelle Bay and across from it there’s no residents.”

“And UGC have been essentially superseded by Westconnex, which has taken over everything along Rozelle Bay, the Crescent, the railyards and a massive chunk of territory including Glebe Island. They have their own plans for Glebe Island, and they don’t even have a contractor yet.” 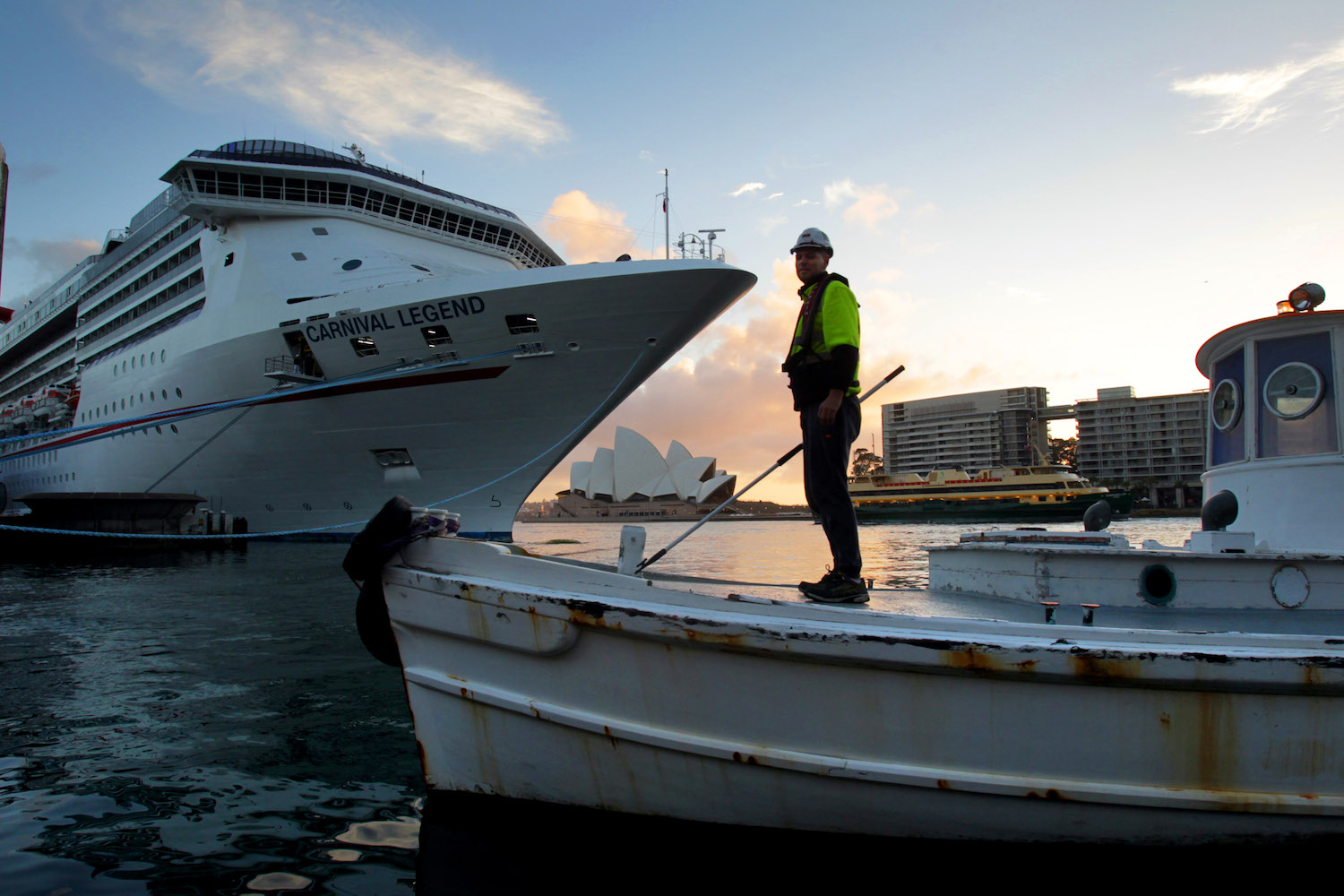 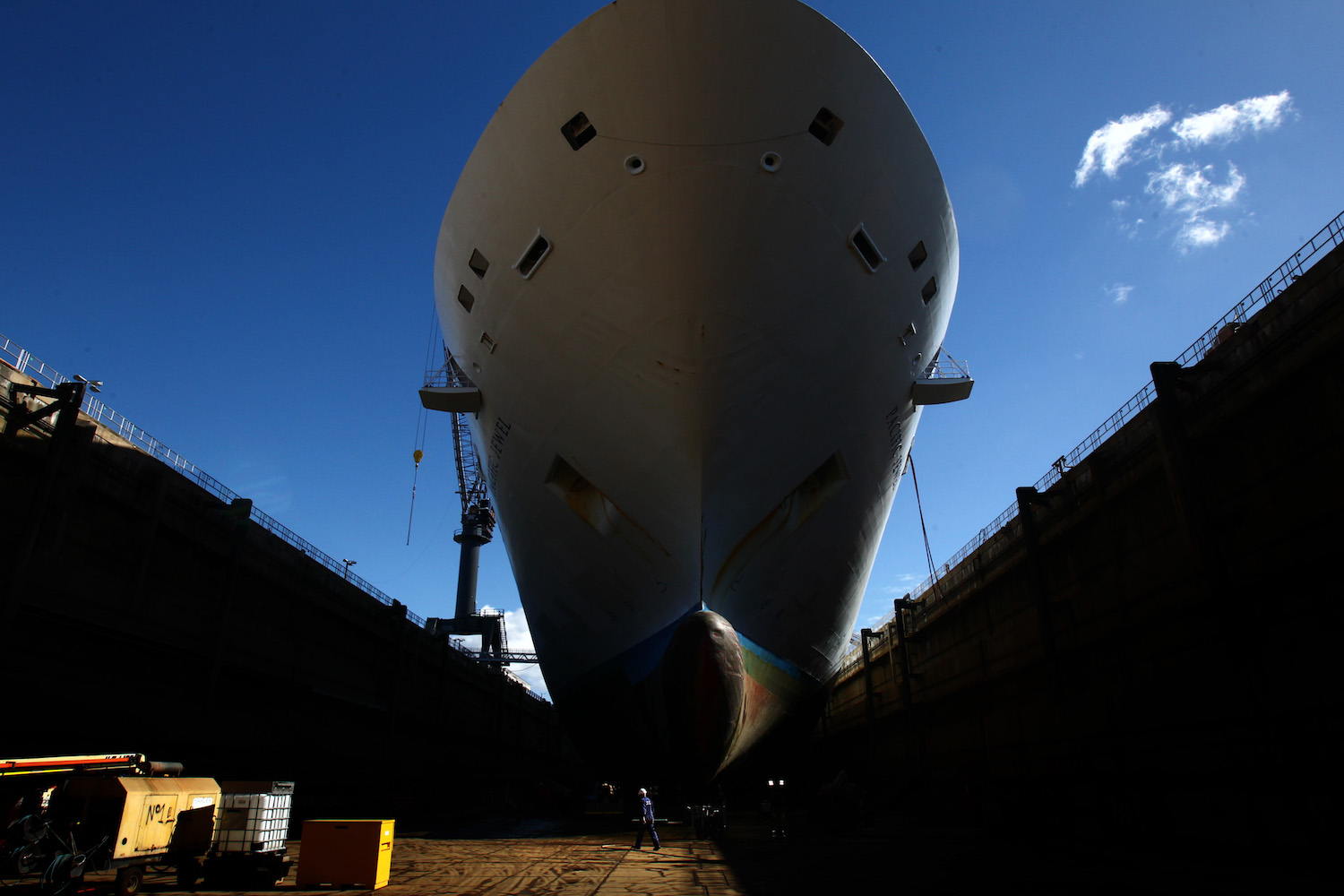 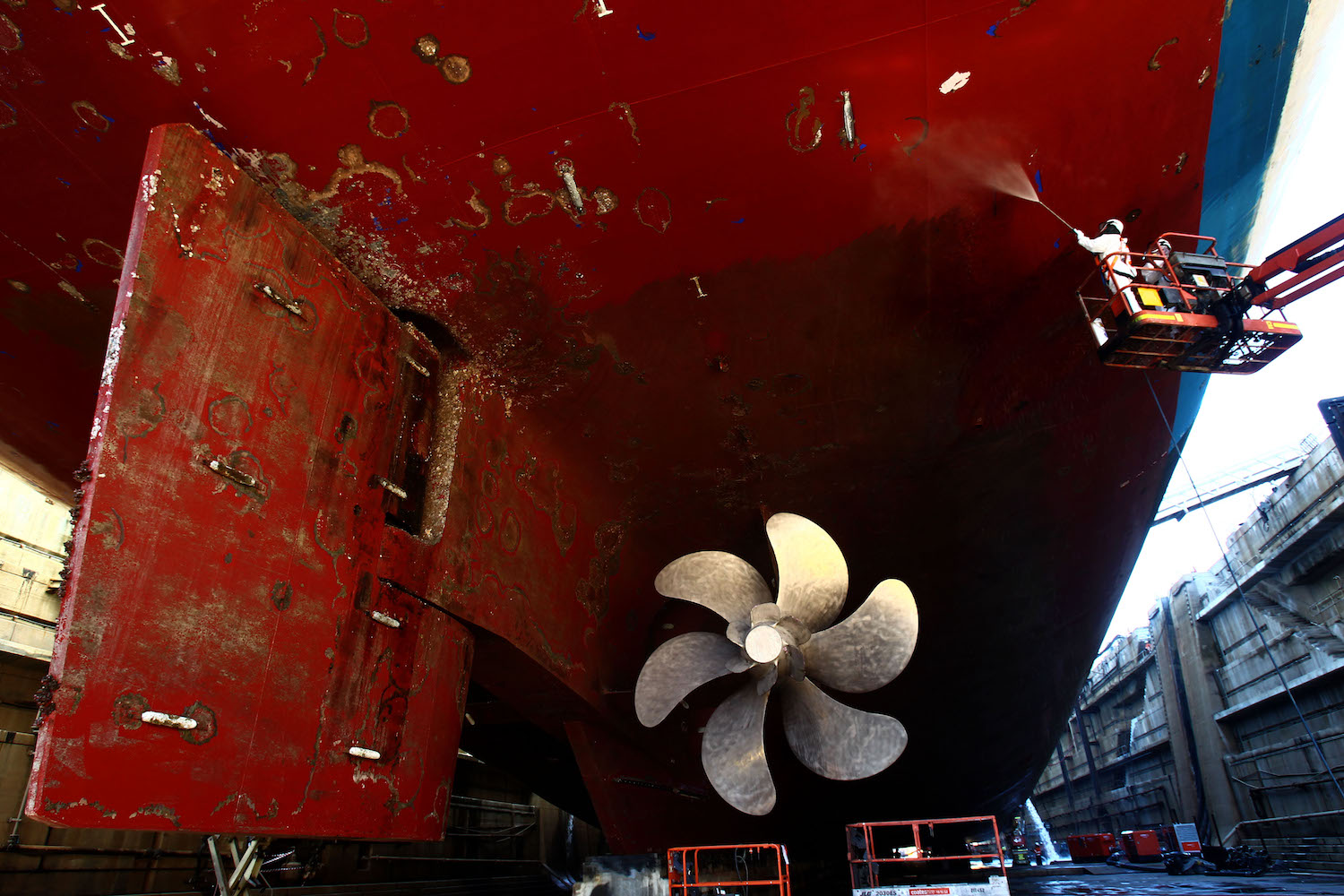 I’m clutching a coffee bought from a baker’s shop front in the Fish Market. There’s no need to hang on; the seas in this domesticated backwater are as calm as the skipper, and the ferry – 24 metres long, capacity 190 people – is built to withstand the cyclone-prone Arafura Sea. Originally commissioned to transport communities from Darwin to Tiwi Island, the Arafura Pearl now runs ten commuter trips a day around the harbour for Manly Fast Ferries.

“It’s a beautiful boat, seen a lot,” says skipper Doug Hazell. Manly Fast Ferries was once a small charter business that became a mainstay of Sydney’s public transport after taking over from the state government’s Sea Cats with two of its own and the Pearl. But like the rest of the working harbour fleet, they’re scrambling to find future berthing space under the proposed developments.

As we taxi under Anzac Bridge, to our left (or portside, whichever you prefer) in Rozelle Bay we can see a big ugly tug amongst the sleek yachts or ‘white boats’ in a crowded dock.

“That’s Sydney City Marine,” says Doug, pointing. “They have one of the last slipways (maritime maintenance facilities) that can handle huge vessels. For that reason they might stay where they are.”

There’s an acrid stench as we approach the White Bay Cruise Terminal.

“The raw crude oil that cruise ships burn,” he tells me. Two of these massive vessels sit at dock, blowing fumes into Balmain.

Greens MP Jamie Parker, who refers to UGC as ‘the government’s glorified real estate agent’, will tell you just how much drama the relocation of this terminal from Circular Quay has caused. “This goes to the ad hoc planning that so many governments have taken to the Bays Precinct,” he fumes. “That’s highly toxic particulates blowing into schools and houses every day.”

Next to the cruise ships are a small fleet of tugs and barges. Tim Gosby, a refueler barge pilot who docks at Goat Island, says its 150 and 50 tonne slipways are endangered by proposals for luxury hotels. “The harbour’s getting pretty small as far as finding berths goes,” he told me. “And when the white boats roar up and down making waves it can get a bit tricky if you’re trying to do a crane job.”

We’re out into the open water as daylight colours the harbour. On our right Walsh Bay shines with private apartments, their luxury marinas built on the old finger wharves that used to go all the way to the Harbour Bridge.

In the Depression, that stretch was known as the Hungry Mile. It’s a dreadful irony that these docksides once resounded with the boots of people desperate for work. The echo of that gig economy must be a sweet irony for the CEOs in these heritage listed developments.

A huge passenger liner is coming under the Harbour Bridge, nudged from behind by one tiny tug. There’s a metaphor there somewhere.

Past the Opera House is the military clutter of Garden Island, whose dry dock is the biggest in the Southern Hemisphere. “I’d be very surprised if that got decommissioned,” says Doug. (In fact a $20 billion dollar redevelopment plan has been mooted in government circles.) ‘“But there’s talk of Cockatoo Island being developed to take all the working harbour infrastructure. That would be a nightmare, ‘cos you’d have to start at 3am every morning just to get out to work.”

Then we’re steaming past North Head. Commuter ferries are integral to the Manly lifestyle, affecting demographics and real estate prices. It’s faster to get into the city from a Manly ferry than anywhere else except Pyrmont or Balmain. But negotiating kayaks, swimmers and small boats in these crowded waters is a risky business.

“A skipper could get in big trouble if something went wrong,” Doug comments. “We’re delivering up to 1,000 people a shift. From 7.30 – 9am it’s a human conveyor belt.”

That congestion will only increase. Parramatta River is set to become a major commuter corridor and the working harbour will increasingly be about transport rather than industry. 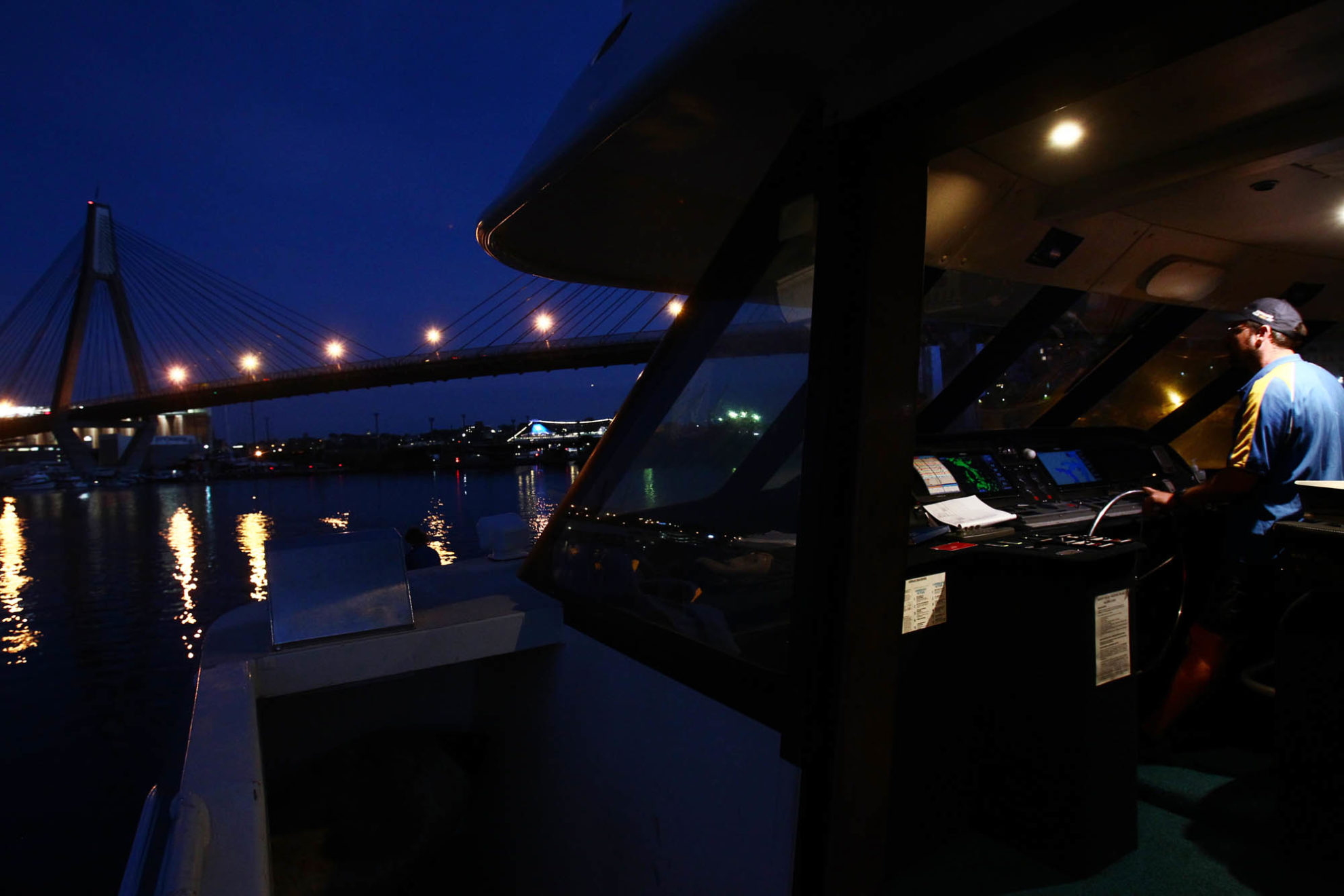 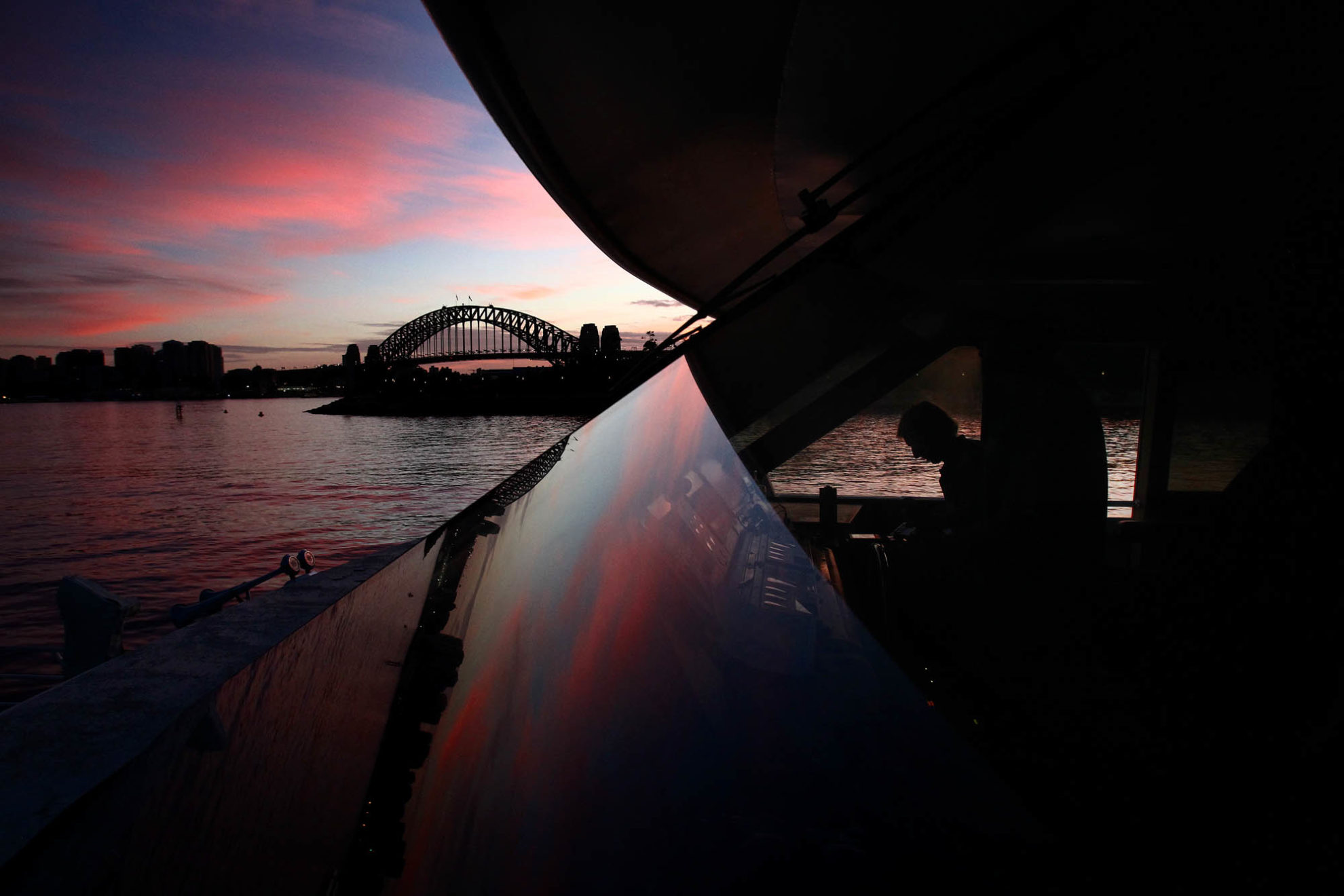 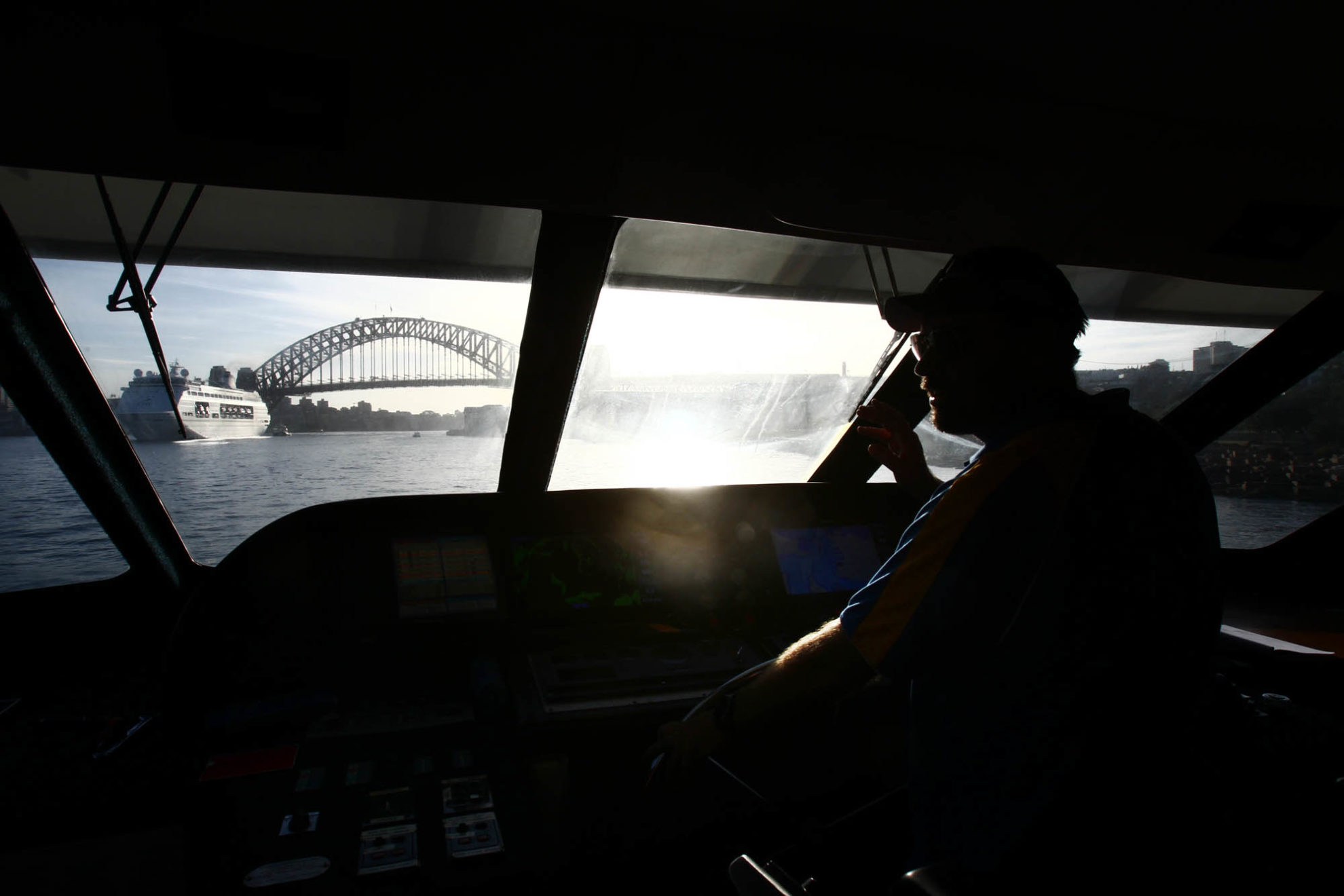 Leaving Manly, it’s a glorious late summer morning; the white boats fluttering as we run home. A huge swell is breaking hard on Washaway Beach but most commuters are absorbed by their phones, immune to the cruel beauty of Dobroyd Head.

Painters are working under the Coathanger, dangling over the giant clown’s open jaws beyond. Luna Park was once a workshop for the Harbour Bridge construction. The park opened in 1935, just after the Bridge was finished. Luxury entertainments have always come hot on the heels of heavy industry.

A tiny wooden boat is creeping along the shoreline. Doug tells me it’s a ‘line’ boat, carrying cable from big ships to wharf bollards. “That’s probably well over 60 years old. Not many people even know how to build those boats any more. There’s an entire subculture of micro-jobs disappearing.”

A sign on the corner of the wharf at Darling Harbour warns: ‘Make no waves beyond this point.’

Doug rolls his eyes. “They don’t get that a solid moving through a liquid is going to make waves. You go as slow as you can, but you can’t help making a wash. We get people filming us and if their yachts wobble they make a complaint.”

In Walsh Bay a Waterways Constructions barge is parked up against the pylons. There are divers underneath, checking the state of these old wooden constructions. It’s rumoured that Waterways’ base at Rozelle Bay could be in danger of relocation, though as an essential service they have to be able to respond quickly to any maritime emergency.

We check off more working boats: a slow moving Environmental Services barge near Walsh Bay collecting rubbish or stray logs; an Ausbarge doing maintenance under the old Pyrmont Bridge. The harbour can’t function without them. Sea walls need fixing, boats need fuel. There are wooden pylons that rot. Chains that rust and snap.

Back in Blackwattle Bay we tie up at a wharf with around 40 fishing vessels. It’s been condemned. No-one’s certain where they’re going to berth once the Fish Market moves.

Maire Sheehan suggests the confusion in the harbour is as old as corruption. “It’s all about money. The waterfront has become very expensive and the government makes more money out of selling land than leasing to a working harbour business. So you’ve got all these agencies that used to be called government departments, fighting over the land because they’ve got to deliver results in terms of profit.

“Then there’s private developers and Treasury, who put money concerns over anything else, including social or environment.

“Amongst that you’ve got what’s left of the working harbour… what hope has it got amongst that madness?”

Walking Home A Letter from London
by Will Self
The city seems to be both rapidly reconfiguring, and moving somewhere – although where I’m not entirely sure.
Full Article
Culture
Review 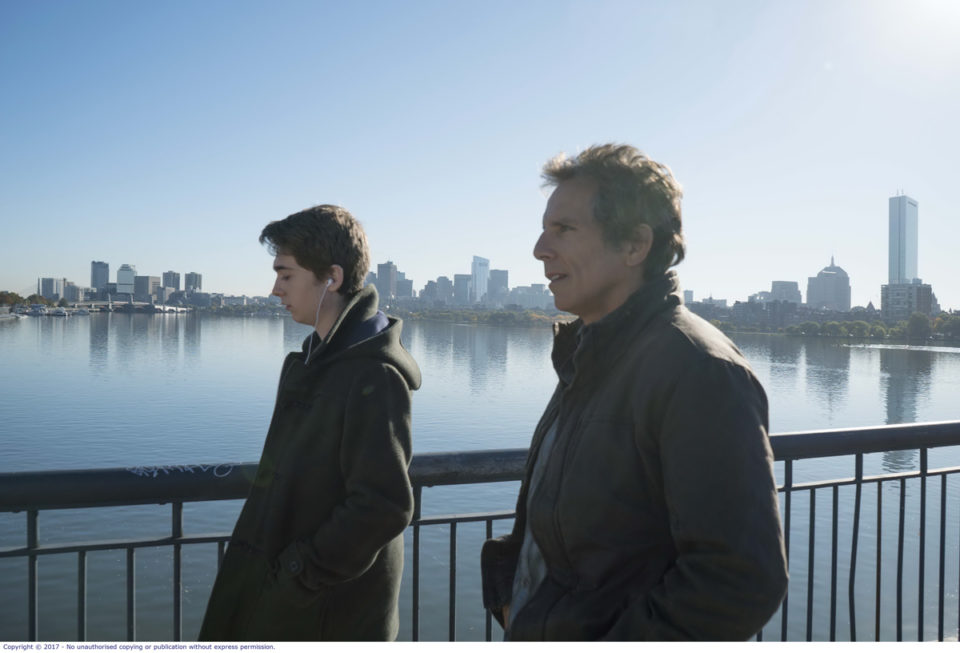 Brad’s Status The anxiety of middle class parenting: ‘What school is your child going to?’
by Rochelle Siemienowicz
Brad’s Status is a terrible title for a film, and yet it’s perfect in its awkwardness, suggesting the bald updates of Facebook feeds with their shameless bids for ‘likes’.
Full Article
Footpath 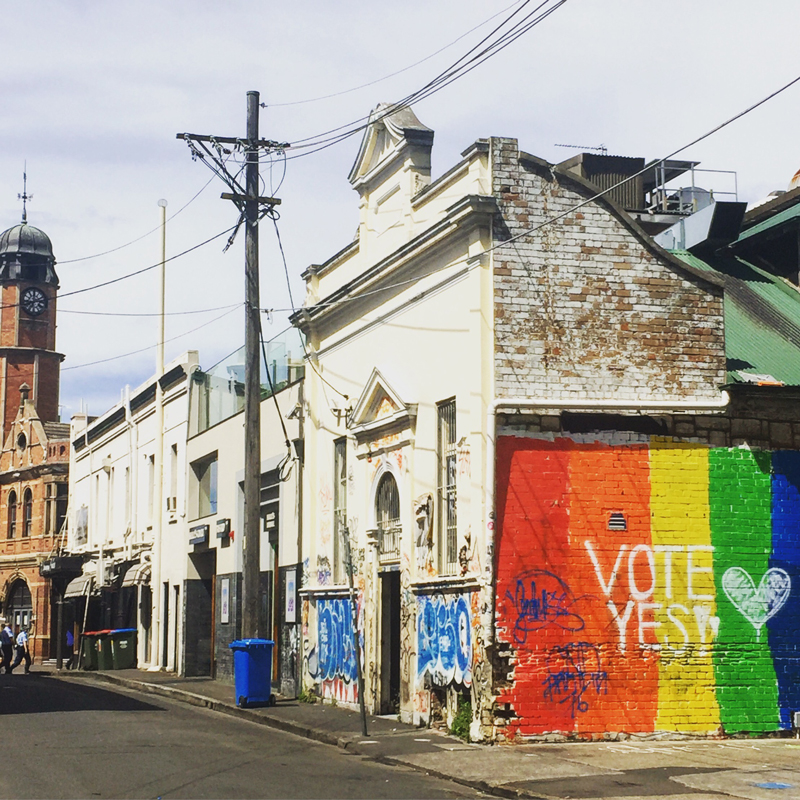