Waking Up as Someone Else How Kate Fischer became Tziporah Malkah 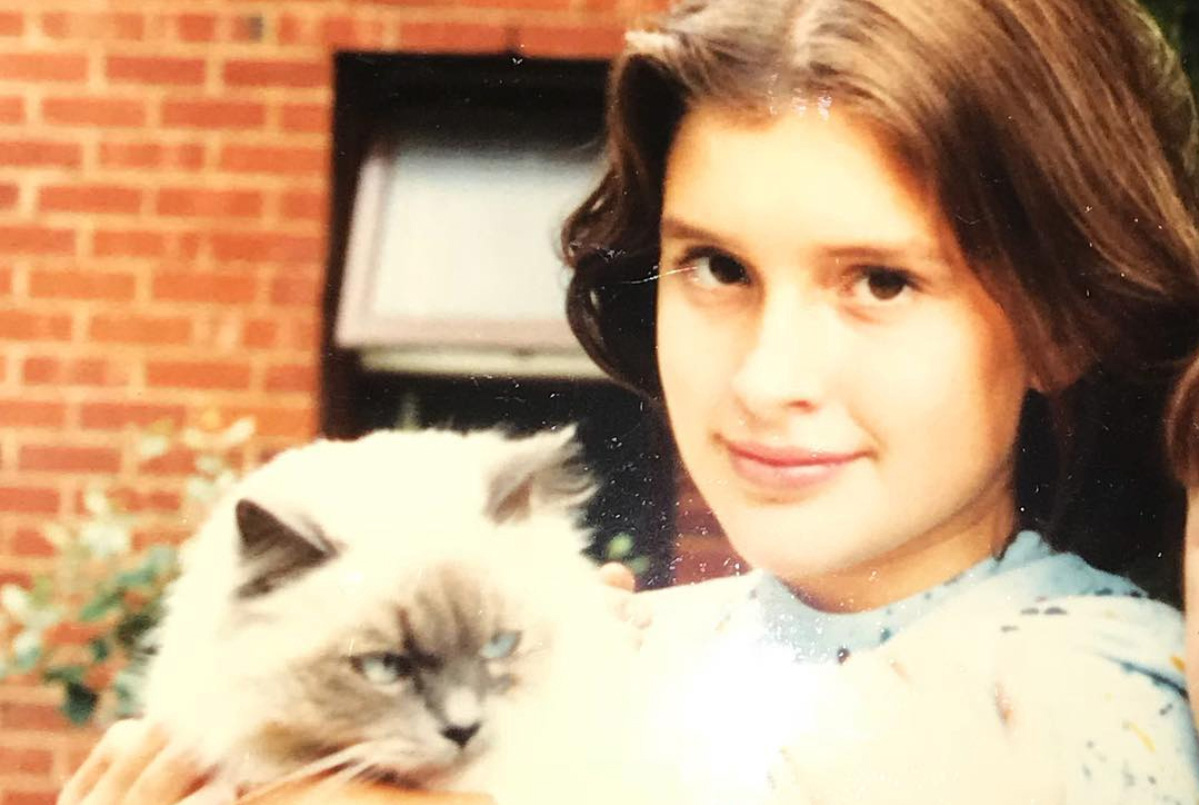 It’s a humid morning in Sydney’s Elizabeth Bay – overcast, with a bleached sky – and Tziporah Malkah is smoking in her new high rise apartment as she waits for the delivery of a bedframe. The sheets on the mattress belong to the bed she shared in Adelaide with her ex-boyfriend; like a lot of old things in her life, they no longer fit.

Even inside, the light works on her skin. In full makeup after an appearance on Channel 7’s Sunrise and with her hair pulled back in a chignon, Malkah could be a Pre-Raphaelite madonna – her features delicate, symmetrical, underscored by sadness – and then she laughs, a booming tall-girl laugh, and, indicating her translucent nightgown, says, “You’ll be pleased to know I didn’t wear the fuckin’ nightie on TV.”

Only a few months ago Malkah was before an Adelaide court on charges that involved an on-off relationship with her ex, who claimed she had assaulted him in an argument over marijuana and his sick cat. Malkah was also charged with disorderly conduct and resisting arrest. She’d admit it was a low point for her. Her lawyer argued she was “a changed person” in the wake of what had happened.

On the basis of her good record and an early guilty plea, no conviction was recorded and Malkah was fined $1,200. When journalists outside the court asked her if she had a problem with police, Malkah still had enough spark to reply, “I’ve got a problem with you.”

Today her face changes constantly – animated by emotion, transformed by shadow – reflecting thoughts she can find difficult to harness or contain. Here in Sydney, she says, everything’s better. Her agent is fielding offers, and she’s even beginning to go out again. “I haven’t had time to miss Adelaide,” she says, blowing smoke, “but I have moments when I break down.”

Walking over to the curtains, she looks down at the still blue waters of the pool. 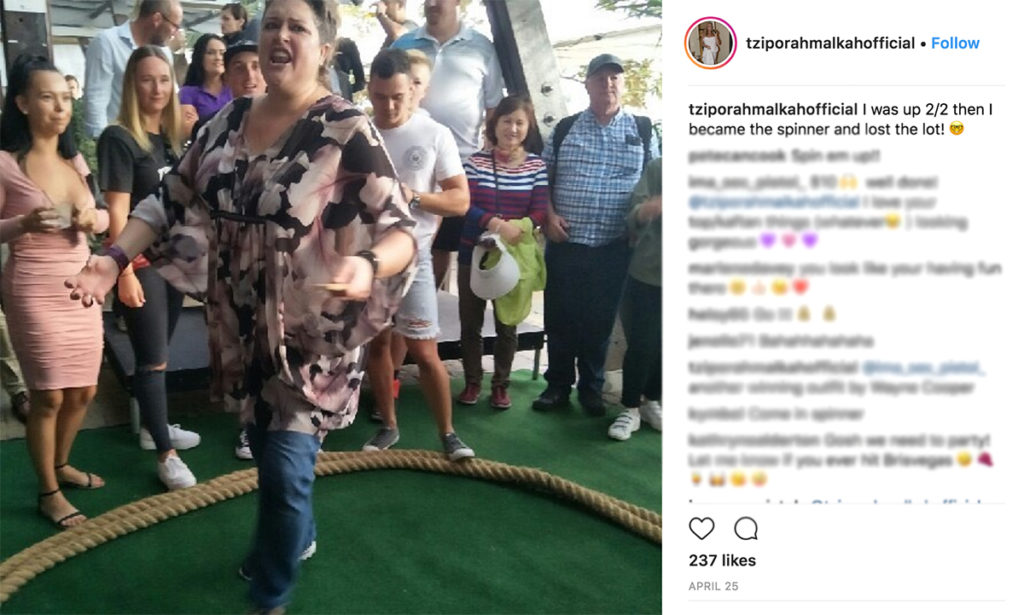 Now 44, Malkah, once known as Kate Fischer, is returning to the media after six years spent working as a carer in Melbourne. In combination with her significant weight gain – at its peak, she weighed 118.5kgs – it is this work that has attracted the most condescension from her former cohorts. According to media lore, any ex-fiancé of a billionaire has no business changing, exploring life or existing anywhere other than within the narrow, calibrated space, both physical and psychological, allotted to beautiful women.

Malkah was mocked for her starring role in Sirens in 1994, for leaving James Packer (“In a crushing blow, within 12 months of splitting from Fischer, in October 1999 Packer married Meares”), mocked for moving to Los Angeles in 1998 (“after a handful of attempts at resurrecting her career”), mocked for changing her name in 2008, mocked for her frankness, her artlessness, her sincere commitment to spirituality.

Her 2017 appearance on I’m a Celebrity … Get Me Out of Here! – funny, devoid of vanity, outrageously honest – drew further derision from female journalists, with one writing, “Her weight has made her the target of ridicule on social media, with some criticising her for not wearing a bra in the jungle.” Industry rumour has it that the bed that cracked under her weight on the show was rigged.

“I was the fat chick on the broken bed,” she says, her eyes darkening. 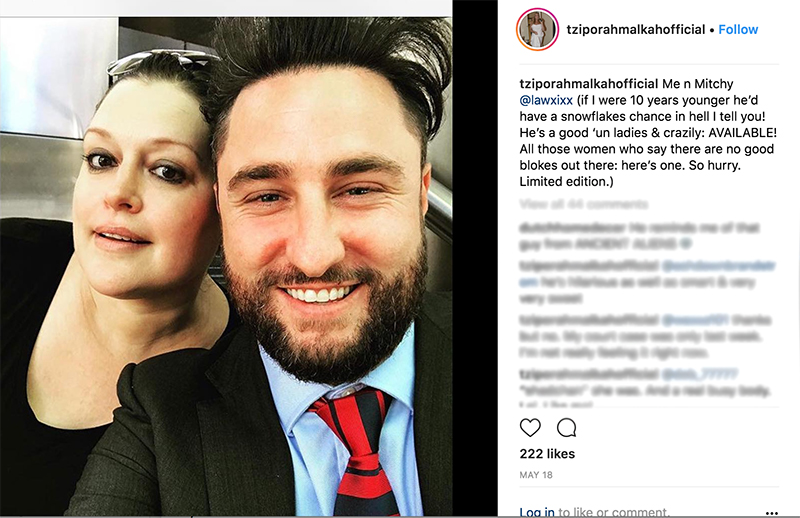 Malkah’s questing spirit was seen as an embarrassment as it was not paired with a suitably chastened body (no sugar, no fat, no cosmetic surgery). One female journalist wrote that Malkah had “let herself go”; another, that her figure was “a far cry from her modelling days”.

Such comments have rarely been made of male public figures. She was never praised for her discipline, business acumen, financial intelligence or her inspiring resilience. If, as certain women have suggested, her success was, in fact, due to her beauty and her breasts, why is every attractive woman with a full bosom not, as Malkah was before her engagement to James Packer, at the top of her field and earning $750,000 a year?

She was even criticised for accessing the full spectrum of human emotion. When Malkah publicly alluded to family difficulties, she was accused by yet another female journalist of “boundless self-pity”.

Malkah is familiar with such cruelty. At 21, she did as anyone would have done in her position: her beauty was a passport and she used it, both disconcerted and dazzled by its reception. Her beautiful smile and breasts were staples of the social pages. She laughed, teased, played the clown. “I don’t go to parties, my cleavage does,” she joked.

The big names that were part of her story also inspired envy – among them, one-time boyfriend Ben Mendelsohn (whose drug problems in the ’90s drove her “insane with worry”), Kerry Packer (she’d describe the mogul and his son as “complete bogans”), Hugh Grant (with whom she acted in Sirens), and, of course, her mother, the celebrated reporter and now New South Wales Minister for Family and Community Services and Minister for Social Housing, Pru Goward. 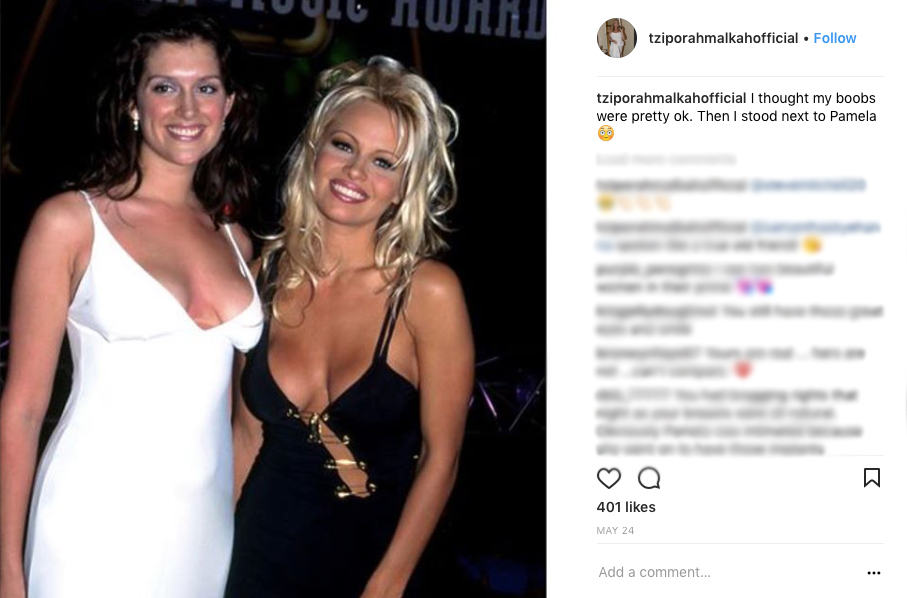 Predictably, Malkah had few girlfriends in the industry. Deborah Thomas, Ardent Leisure’s former CEO who abruptly left the company in 2017 after a blaze of bad publicity, critiqued her in a television interview. “She’s also a big girl,” Thomas, then an editor, said. “It’s the sort of – it’s the sequins and the tartiness.”

Entrepreneur Poppy King confronted Malkah on television about her breasts. “If you put them out there, and if that’s what you’re using to get so much publicity, don’t you have to expect [the degradation]?” Malkah was always gracious in response, if only because she never thought herself worthy of kindness or respect. Even now, she is shy about suggesting that she may have any value beyond her appearance.

“I have two very clever parents and all four grandparents were clever,” she haltingly says, “so even if the smarts jumped a generation, I’m still going to get some clever genes.”

When Malkah was captured, dishevelled, fat and wrapped in a sheet as she picked up the mail in 2016 by a paparazzo, it was the second biggest story of the week; the first was the US presidential debate. Softly and with incredulity, she says, “People wrote to me from Sweden saying, ‘You’re gorgeous! We love you! And, by the way, you’re overdressed for Scandinavia’.”

The intensity of the affection, she quietly says, stunned her. 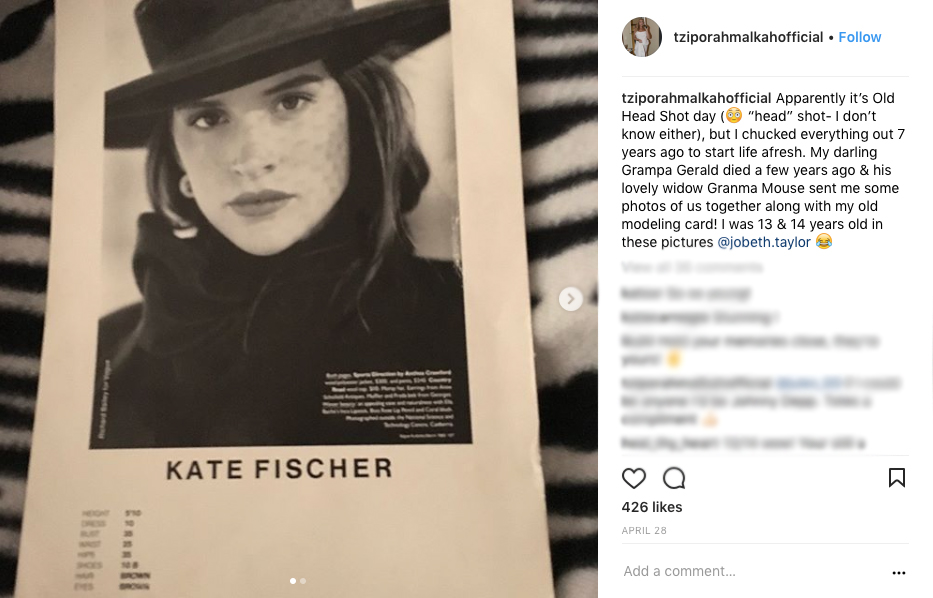 When, at 13, Malkah asked if she could enter Dolly magazine’s Covergirl competition, she thought her mother chose the “ugliest” photograph; Malkah won. Soon afterwards, she came fourth in Elite New York’s global Look of the Year competition (or, as Malkah puts it with characteristic self-disparagement, “Dork of the Year”). Her age, insiders conjecture, was the only factor that stopped her winning. Such remarkable beauty, however, exerts a price.

Crushing her cigarette out, Malkah recalls the night a producer asked her over to watch a movie. He was a friend, she says; she was 16 at the time. “The lights were dim because we were watching The Deer Hunter. He was down one end of the couch and I was at the other; it was dark. He was overweight even then and making snuffling noises but I was watching the movie, enthralled. And suddenly he turns around and goes, ‘Here!’”

Malkah gestures at violent speed and, smearing one palm over her cheek, nose, eyes and mouth, she relives her shock. The level of her distress is disconcerting to witness.

Malkah would begin a relationship with a 24-year-old boyfriend who divided his time between Manhattan and Los Angeles. “It didn’t work out and I had an abortion.” Her voice is tired, her face drawn. “I came back to Australia straight afterwards. 16. I was numb. I couldn’t afford an abortion – I didn’t have insurance – so my modelling agency loaned me $5,000. One of the best gynaecologists in New York. I wasn’t going to go to some shop around the corner and get a coat hanger. I paid them back eventually but they had to tell my mother. I still think about it. You know, I would have a 27-year-old child today. But at that age, I was so confused and messed up. I would have been very loving, but the child would have been a mess.” 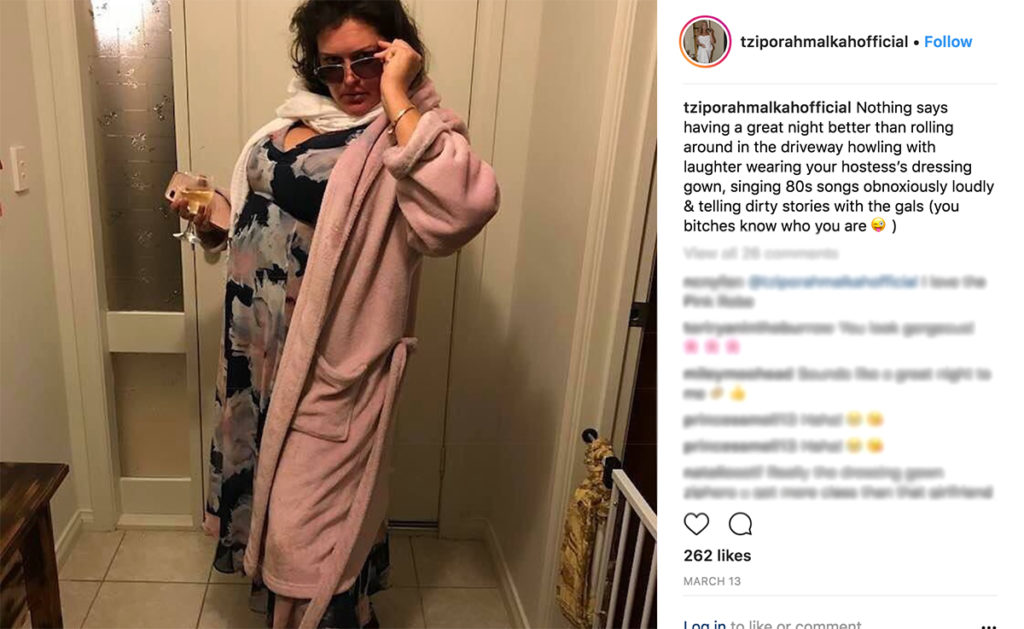 Malkah spent the next few years lurching from man to man, from house to house, from continent to continent, both desperate and destabilised in her search for a love she feels she never had. Her cigarette smoulders as she draws in the smoke.

“When I finally returned to Australia, I was so disconnected,” she says, exhaling. “I didn’t know how depressed I was until I couldn’t distract myself anymore – I could no longer distract myself with being beautiful, with buying beautiful clothes, with being famous, with sex, with work, with travel, with money. There was no more hiding.” She pauses to stub her cigarette out in the ashtray. “There were times I thought: If this doesn’t work out, I’m going to kill myself. I actually planned out how I was going to do it – where, when. I just couldn’t take any more, you know? Enough.”

Her expression is grim. “So I had to fucking face myself. I’ve only just started realising, really, how depressed I’ve been. The past six years were hell. I’m like a cute little dog that has been beaten so much that even if you reach out in kindness, I might just fucking bite you.”

A sudden anger overtakes her and she looks up, baring her bottom teeth. “Sometimes I feel so angry! You know all these fucken yoga classes and shit –” she adopts a breathy voice – “‘Breathe out your anger!’ How many men do you see in those classes?! Women are constantly indoctrinated with this don’t-feel-angry shit! If a wrong has been done to you, feel angry. What it’s made me realise is that I like women more now, because it’s made me feel that we’re all in this together.” 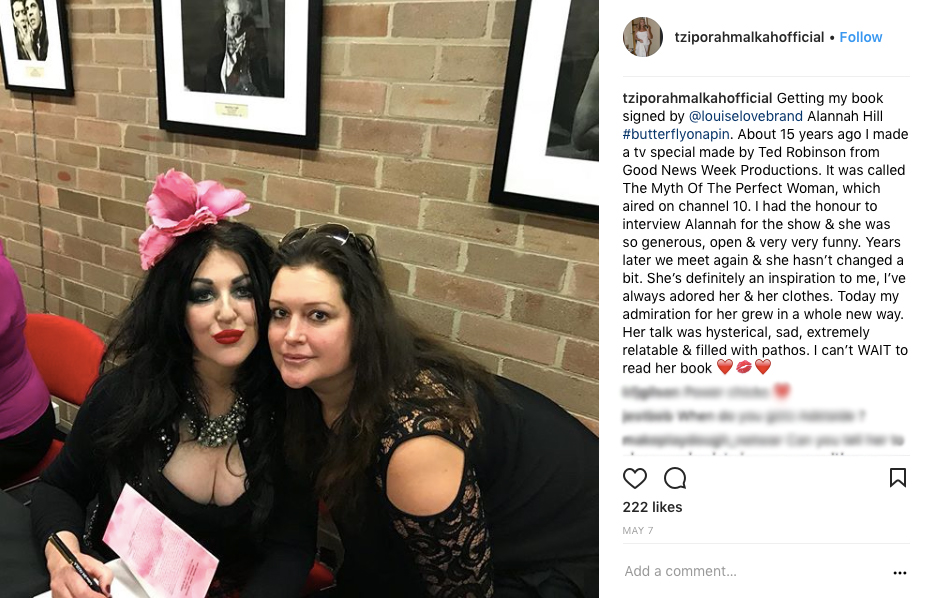 The aftermath of fame – a depression that lasted for almost a decade – took her by surprise. “I’d taken one beating after another, you know? I just took so many hits for so long.”

As she lights another cigarette and exhales, Malkah addresses me with those penetrating eyes. What began as an exercise in voyeuristic cruelty – the paparazzo, the unwashed bedsheet – is evolving into an unlikely metamorphosis. Television executives are beginning to consider her potential as Australia’s new Oprah: both an obvious and spectacular fit.

And who wouldn’t want to hear what she has to say? Returning from the wars of life, the once broken girl is now an emotionally integrated woman, with all the experience and spiritual gravity that such an evolution entails. Her sudden smile is radiant. “I was asleep on the inside for a long time but knew how to fake it on the outside. I’m able to make associations now because I pull things together. I got woke.” 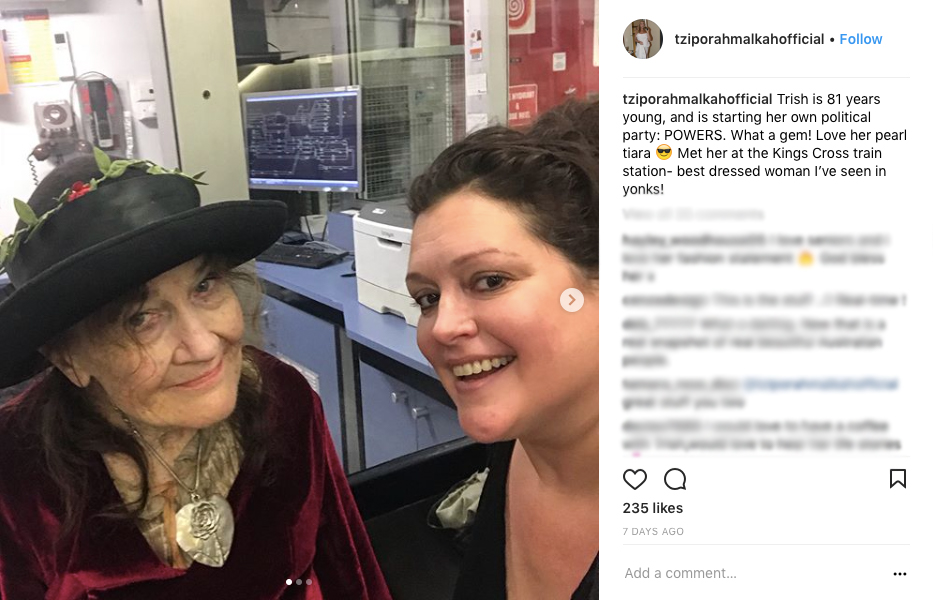 Waking Up as Someone Else – How Kate Fischer became Tziporah Malkah

At Any Given Hour Uber after dark
by CG
"Next morning I awake and check the app. The heat map glows red across the city."
Full Article
Features 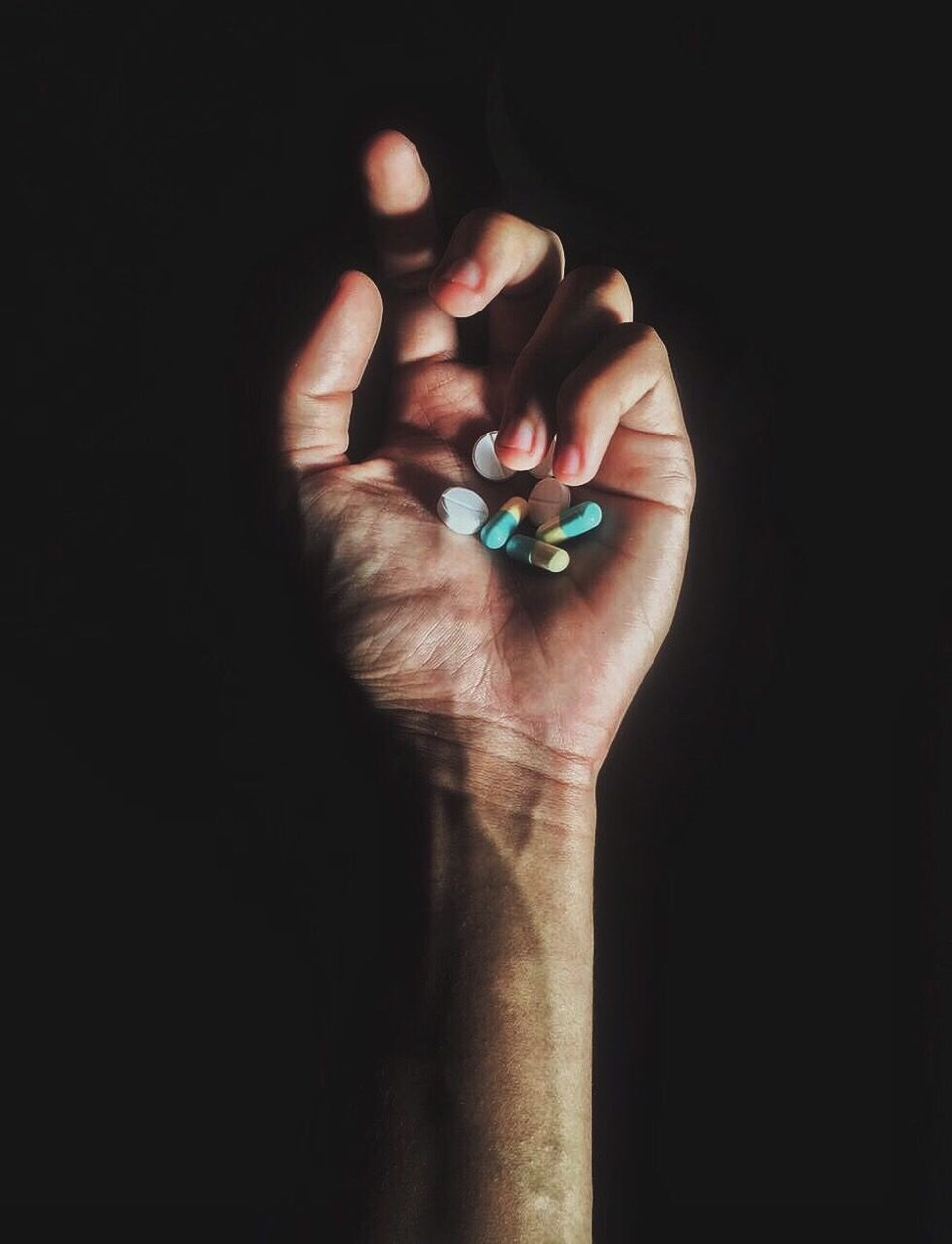 The Unwitting Addict A struggle with Benzodiazepine dependence and withdrawal
by Anon
The normalization of prescription medication can have a placating effect... coupled with my desperation to rid myself of debilitating anxiety, I fell into the trap of quick-fix society.
Full Article
Features 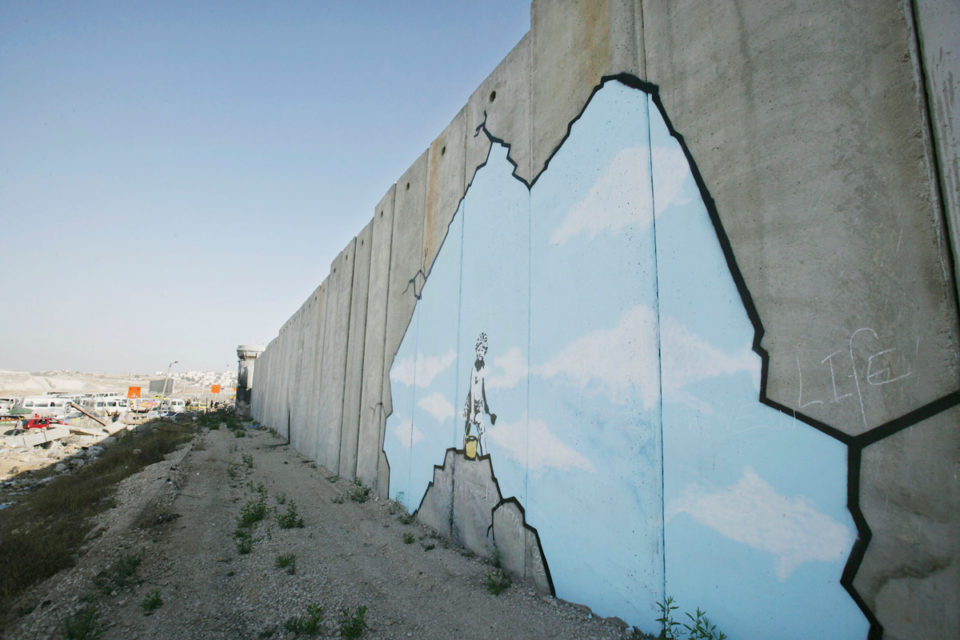 Banksy Goes to Bethlehem The artist’s new venture: The Walled Off hotel
by Jan Dalley
“Seeing the disparity between the two sides was shocking, because you could see the inequality was entirely avoidable.” – Banksy
Full Article
X