Smashed When someone has to get you out 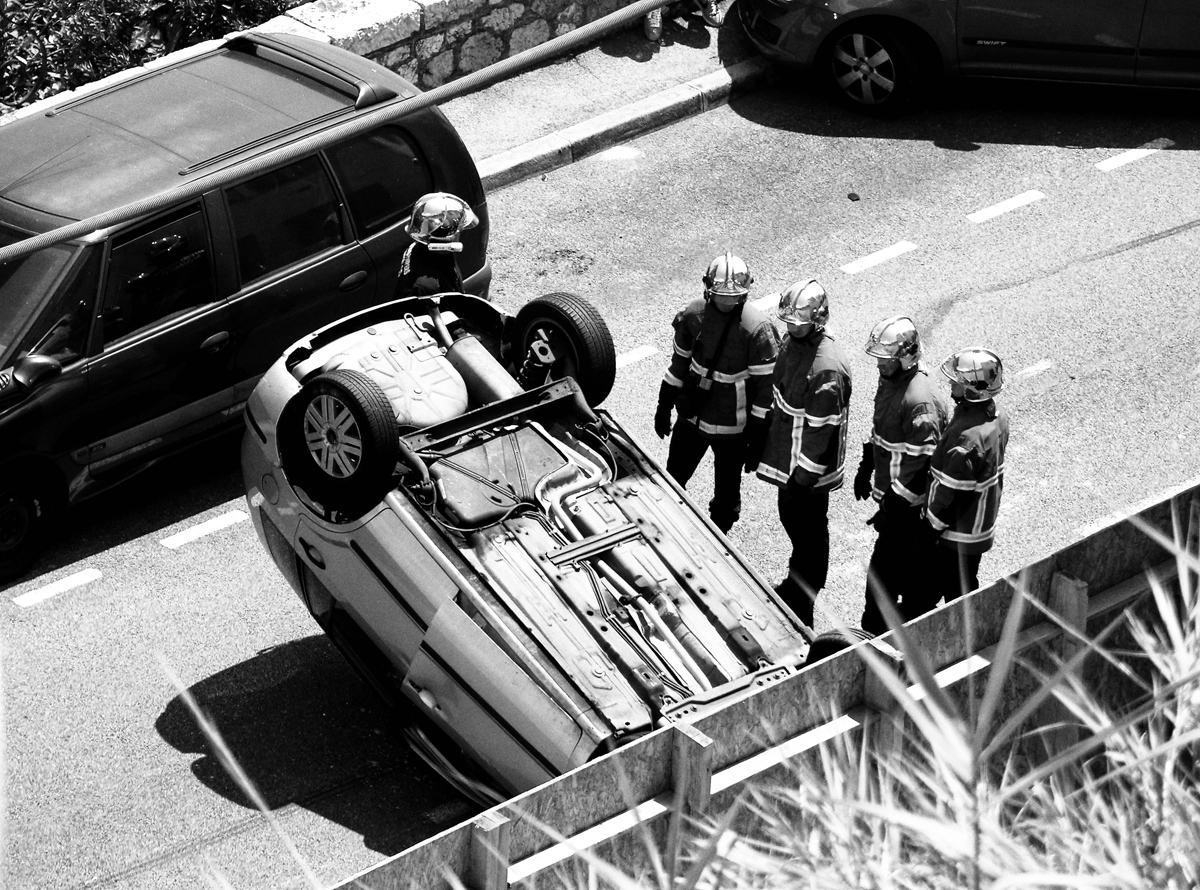 “Two firemen cut the door from its hinges. Dropping it into the road, they peered down at me like the assistants of a gored bullfighter.”

From Crash, by JG Ballard

The recovery man grins as his truck’s flatbed whirs back to horizontal, tonight’s wrecked sedan now sitting tight for removal to the scrapyard.

“Know that old Aussie flick, The Cars That Ate Paris?” I ask, glancing past him to the paramedics shutting the ambulance doors, ready to split with the woman who veered off the road tonight. Her car banged to a halt tilted at an unnerving angle partway down a rocky drop to fields below. It was approaching midnight when the pagers went off, summoning the fire and rescue crew. We stabilised the shaken woman’s car, helped her out of it, and then winched the wreck up here for the towie.

“A town where the locals cause car accidents.” I drag another section of downed safety fencing clear of the shoulder. “They put up mirrors on bends. At night. So when people take the corner they suddenly see headlights coming straight at ‘em and they swerve off and crash.”

“Yeah?” His grin widens. “What for? Just something to do?”

He’s got me. Forever since I’ve seen the movie which is Peter Weir’s first, if I’ve got that right. “Think they strip the cars for parts. Do something with the victims, too.”

Sections of fencing wire are tangled and snarled enough to need taming with bolt-cutters. When that’s done and the debris cleared, we check the equipment used tonight;  this includes chains and steel slings along with canvas salvage sheets. When the winch lines come under pressure we throw the canvas over to contain them if they snap, rather than having steel whip unchecked through the air.

Everything seems fine and accounted for so we stow it all back on the firetruck, say ‘see ya’ to the cops and others, and climb back aboard to radio in a report that we’re done and returning to the station. From there we’ll disperse until a new bad thing happens.

But for now all’s good so we cruise back ‘under normal road conditions’, meaning we stick to the speed limit and the left side of the road for our night drive, with the siren and coloured spinning lights on the roof switched off. The adrenaline’s faded and a mellow fatigue’s setting in. Some of us chat and others zone out.

Tonight’s casualty walked into the ambulance. That’s good. It sure beats getting slotted in on a stretcher with a cannula and neck brace and the flesh draining sallow – eyes shut or panicky. Nobody wants that. And of course nobody wants dead either.

But the dead and injured just keep coming.

Last year crashes on the roads of Oz killed almost 1,300 people and hospitalised around 35,000 others, according to government statistics.

Throw a few years together and you’ve quickly sent more than 100,000 people to emergency departments, plucked a few thousand from existence, and thrown God knows how many daughters and sons and lovers and mothers and mates and grans and all the tangled connections of blood and love into grief and mourning and permanent absence.

Have you ever crashed? Been trapped in a smash? Been hurled and slammed to then sit dazed and broken in the shock, in the dawn of a horrible, fierce stillness? The dawn of no. Of Jesus f__ing Christ. Of moans and wrongness. Of mangle and glass and smoking bonnets and onlookers. And then the wait, the wait, the wait, the wait, until sirens and paramedics asking about the event and the pain and start working on you as best they can through a window or by climbing in until I, or one of the army of me’s, approach to say, “I’m Matt from Fire & Rescue and we’re here to get you out.”

Before the brutality were you zoning out? Drifting off? Glancing at your phone?

I drive differently since becoming a rescue operator. Or maybe I do. I mean I should. Of course I should learn a lasting lesson from squatting by a wreck to gaze at a chunk of human bone protruding from chassis metal. Makes me think of Dylan Thomas’s line, “When the bones are picked clean and the clean bones gone,” in his ‘And Death Shall Have No Dominion’, a poem about the impotent rage that echoes in the aftermath of road carnage. At least that’s how it now plays for me via incantations such as “Strapped to a wheel, yet they shall not break”. I must disagree, Dylan. This restless humanity flowing, flying down roads all over shall indeed break and it shall break all the time.

And certainly I should learn from the helpless whimpers of smashed survivors after we swarm in with our hydraulic tools to cut away the doors and roof; after the command has been given to shift them onto a spine board for extrication to a waiting stretcher and as their post-crash bodies experiences their first post-crash movements they discover that, for whatever reason, the paramedics have not administered quite the quantity of morphia that would make it more ‘who gives a f__?’

Parents, certainly. When she’s getting towards licence age I’ll be telling my daughter not to drive like an idiot; don’t drive like him or her; don’t drive like me. Or like the young chap who had, it seemed, flown his car into a pole, thereby pressing the roof to the bonnet, fracturing various parts of him, and leaving the car looking like an origami creation, albeit one with a foot poking out of the abbreviation of a window. As my wife, also a rescue operator, approached, his first words to her were, “I was only doing eighty.”

I wonder how many drivers don’t just gun it beyond their abilities but instead sink into a swoon state, a dream state, taking a zonked-out slide along the curvature of chaos. At one job, this time in a bright lunchtime, a man is slumped back in his seat, eyes closed, as I fumble with the straps of a catcher we place over steering wheels if the airbag in them hasn’t detonated yet. While the wheel’s unit is still intact after the side-slam his car has taken from another vehicle, down the inside of the front passenger door hangs a huge, fizzled marshmallow skin.

Kind of like the driver, who begins to mutter and moan. I step back for the paramedics, one of whom murmurs to me, “Self-harmer.”

And indeed a dull red grid of parallel scars marks the inner forearms of this clean, neatly dressed young man.

In the truck afterwards, heading back to wait for the next job, I mention the scars and what the ambo said. A rescue operator with decades of experience says, “So what. Doesn’t mean anything.”

Doesn’t mean anything. Draw no inferences. Whatever the f__. A Western Sydney towie tells me his yard is overflowing with wrecks, so few owners being prepared or able to pay a $320 fee to reclaim them. The scrap values only about $100, he says, barely worth it, so the cars just pile up.

Two days after the self-harmer I’m in the middle of a road, standing off the smoking nose of a wrecked car with a hose ready in case it goes up. We’ve beaten the ambulance this time so a firefighter is seeing to a grimacing lady in the back of the vehicle, checking her over, asking her about what happened, and getting any relevant medical history and other details useful for the handover.

Glass and plastic are scattered about, and engine fluids leak onto the road. A couple of fellas lean against the other damaged vehicle, waiting for the police to come with their notepads.

To keep traffic away we’ve placed out lines of witches’ hats, but even with them, the wreck on the road, the clear scent of wrongness, and our firetruck blocking a lane, a stream of cars, utes, and trucks keeps trying to nip through, taking their chances with a rush of oncoming vehicles that can’t really see them.

“Watch out behind you,” the firefighter in charge tells me. “They don’t give a f__.”

I nod and move a bit, puzzled by the possible angles of the collision at hand.

“How do you reckon this accident happened?”

“What do you mean?” His sunglasses stop scanning and fix on me.

“Just trying to figure out how it happened.”

“Mate, to be honest,” he says, his smile as fixed as ever, “a long time ago I stopped giving a shit how anything happens.”

Now I’m the officer in charge as we grab our gear and jump in the truck. The print-out says MVA, short for Motor Vehicle Accident, with ‘persons trapped’. We power towards it ‘under lights and sirens’, as the jargon goes, exercising our exemption from speed limits and other rules of the road. Being trapped in a crash is a deeply unpleasant experience for most people and it delays complex medical treatment.

While the driver beside me steps on it towards the accident, I radio FireCOMS for updates and a more precise location, and then allocate tasks. Unlike the rest of today’s crew, this driver is not a qualified rescue operator so he won’t be ‘on the tools’, but he is useful muscle. After carrying rubber chocks, wooden blocks and wedges for an operator tasked with stabilising the vehicle – he’ll be sliding them underneath to stop the car from moving when we work on it – the driver can jump into assisting with the tool dump, making sure that on a salvage sheet we have at hand the heavy metal hydraulic shears, spreaders and other tools  that are likely to be needed to free the casualty.

We’ll also want the glass management kit for controlled breaking of the windows. It has a glass-punch, a bag to catch the chunks and shards, and plastic shields to first place between all that and the casualties. If we have to cut the windscreen then we’ll need the reciprocating saw too, but I can’t form the plan for getting the casualties out until I see the vehicle and ask the paramedics how much of a hurry they’re in.

If they see or suspect life-threatening injuries or if a casualty goes into cardiac arrest then any elegant plan I might develop for opening up the car to gracefully ease out a patient will be aborted and we’ll either just yank them through whatever opening there is, or go hell for leather, ripping just enough space to drag them the hell out.

The traffic banks up as we close in on the wreck. The crew stuff their pockets with blue nitrile gloves for protection against blood, urine and other bodily fluids, and grab particulate-filter masks to wear when breaking windows or spreading absorbent moss over fuel and engine leaks. We don our visored rescue helmets and Kevlar-lined work gloves.

There’s the car – man it must have flown ten metres before rolling. I pick up the radio to give the arrival report. The police wave us in.

Smashed – When someone has to get you out 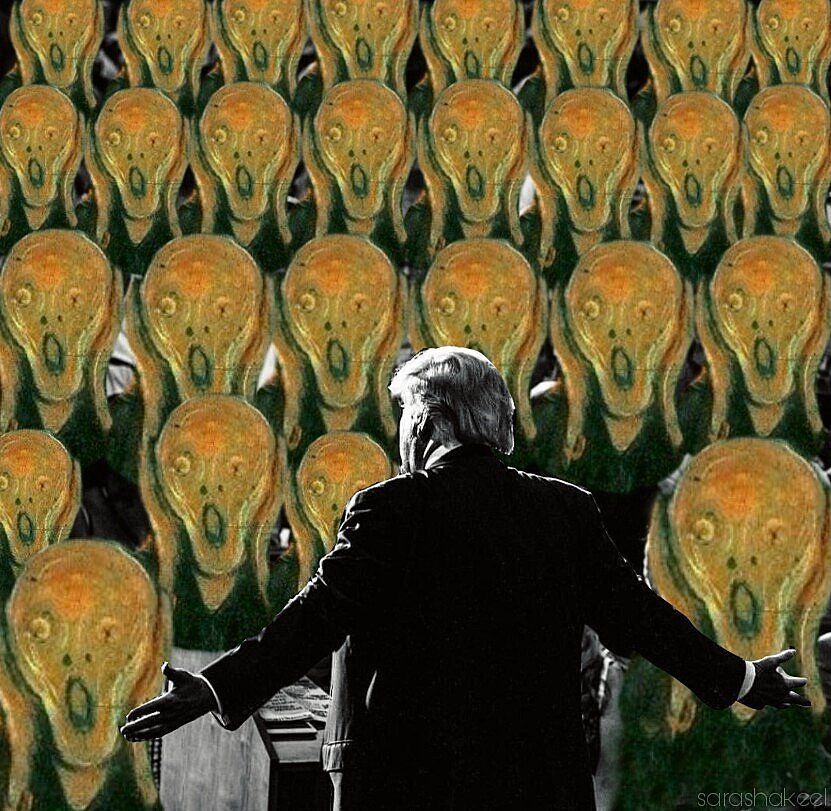 Address from the New President, 2020 #potus #guns #numb #toughmeasures #shooter #prayers #clichés
by Tug Dumbly
“Our hearts go out to all these poor tortured words and phrases that get murdered with such rampant indiscrimination.”
Full Article
Footpath