The Ibis and the Real Estate Agent fiction 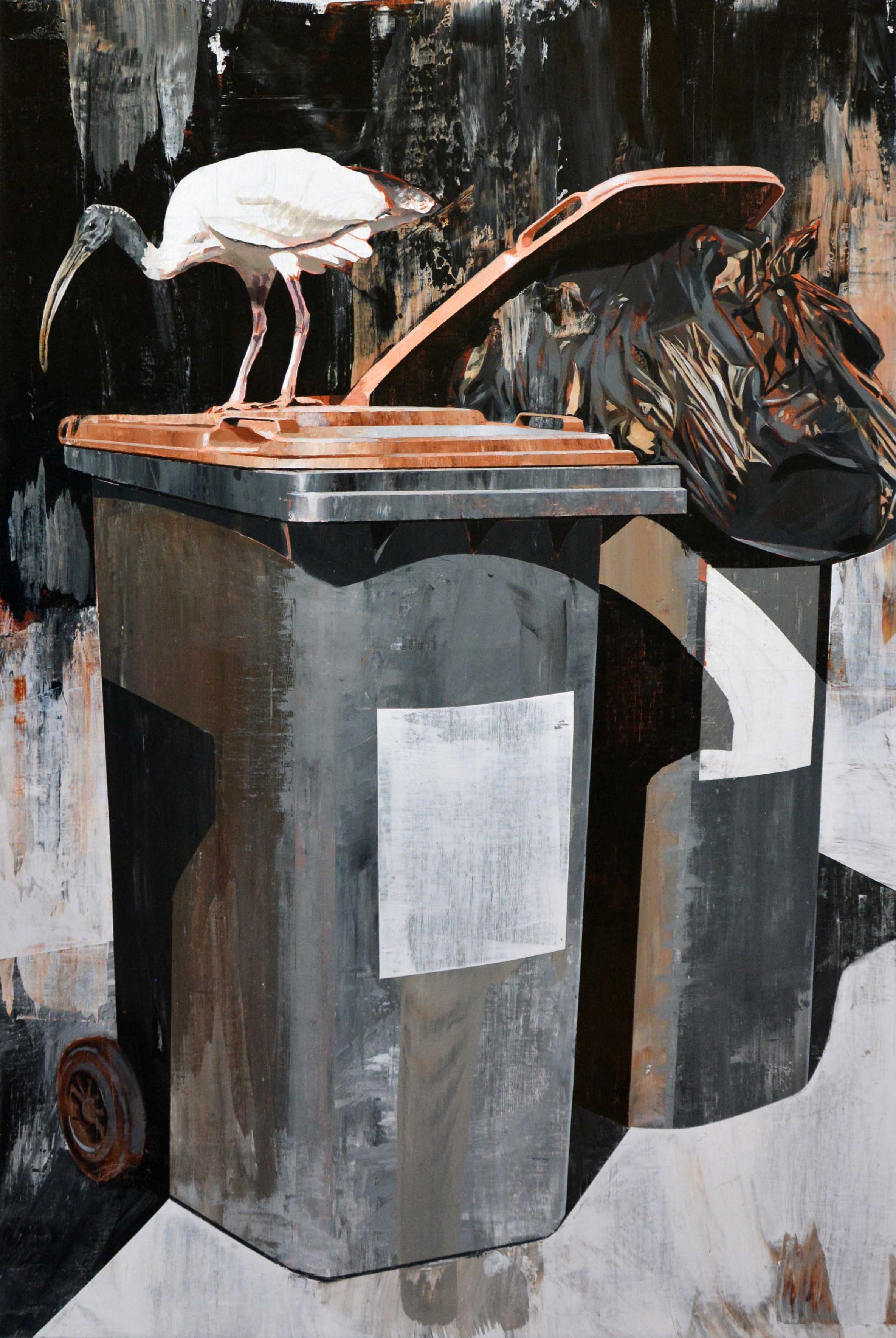 Like most of the Inner West, the neighbourhood was as full as a Macca’s car park bin. For the first time in, I don’t know, as long as I’ve been alive (seven years, twenty-three weeks), no one was moving in or out. The solar-lit signs with cosy-inside pictures had stopped going up and down and I hadn’t heard any shouty weekend numbers men in weeks. Each street was stuffed with all breeds of people, snuggled up all broody content in forever homes instead of all that moving in and out humans ’round here used to do. How this came to be, I do not know. Perhaps they just decided they liked the neighbourhood and were staying put now. Simple enough, I suppose, which makes it all the more surprising that Barry, an actual human, took so long to notice.

The only time I ever spoke to Barry (offspring: Reba in 2K; standing canteen order: ham and cheese wrap and banana, bonus muffin on Fridays), I was working on a rock-hard Cheesymite I’d found outside the primary school library (I sympathised with its previous owner as soon as my beak met that rigid cheese, but fortunately I’m not picky).

Barry had arrived early for home-time bell and was pacing the quadrangle like a zoo animal (chopped vegies and hay, inedible mulch). When you spend as much time as I do in the schoolyard, you hear the mum-and-dad talky-talk at bell time, and I knew all about Barry. I’d noticed his recent decline and guessed that the you-scratch-my-back-and-I’ll-scratch-yours agreement he’d beaten half-a-dozen or so other real estate agents to win from the P&C hadn’t turned out to be the windfall he’d expected.

But like most things humans do, it’s complicated, so let me explain.

Barry had promised the principal, Ms Tillerman, he’d pay for some long overdue school improvements, and in return she let Barry put shouty writing about his business at the bottom of the school newsletter, hang a picture of his ripe-peach sponsor head next to the chess trophies and school captain roll, and be the quizmaster at Trivia Night. Barry’s face was everywhere so all the other mums and dads knew he wanted to help them find bigger, shinier houses than the ones they had now. His Generous Support had already given the school new paint (heritage green, I’ve seen worse), the bike shed (filthy pigeon magnet) and the new lockable roller door for the canteen window (very bad).

So there was Barry, pacing, pacing. Very agitated. His face had gone from ripe peach to uncooked pizza base. His hair needed preening. So did his suit. His shoes, once as glossy black as the blocky room-on-wheels he and Reba came and left in each day, were now worn down to their chalky pulp.

I’d seen some of his recent talky times with other parents and they’d been not-so-smiley. No one looked him in the eye. He less and less visited the talky islands they formed around the quad at home times, instead he slouched alone over the screen of his walk-and-talk, poking at it.
Eventually he stopped the zoo-walkies and sat on a low bench outside the library, pushing his hands into his face. I knew what that meant. It always pained my heart to see a human in distress. It was time to do something.

I flapped closer and cleared my throat. Barry looked up with a start. He glanced from me to the Cheesymite on the ground, as if unsure which of us had disturbed his private sad time.

‘It’s no use, Barry,’ I said in my clearest croak. ‘You’ll never get a commission out of any of them. Just cut your losses and move on.’

‘That lady real estate agent sponsor before you, she already found homes for them all.’

He crinkled up his face the way humans do when they get fighty, then flapped his hands. ‘Shoo!’

I instinctively raised my wings and hopped backwards, then resumed my composure, pausing only to turn and realign an unruly wing feather with my beak tip.

He held up a hand, palm out. ‘Just stop right there. You —’ He glanced sideways at the other parents, who were all talky distracted, then turned back. He swallowed hard, took a deep breath and pointed his cheese-stick finger at me. ‘You — don’t get to say anything. If it wasn’t for you and your bloody mates, I could maybe ride this out. But this deal is ruining me, and you lot are the last friggin’ straw.’

Well, this was unexpected. I ruffled up in defiance.

He waved his hand towards the front office. ‘Just had a meeting with the principal and d’you know what she wants now? After she’s already squeezed me completely dry?’

I shook my tiny head.

‘Another six grand. Six bloody grand for new vermin-proof bins. Vermin — you know what that means?’

I couldn’t tell if he was being rhetorical or honestly thought I was as clueless as a pigeon. I was also deeply shocked he’d used the V-word to my face. I straightened my neck as much as I could. ‘We are protected, you know.’

He laughed. ‘Tell that to the kid whose sushi bloody roll you, according to Tillerman, snatched out of his precious mitt last Thursday.’

Hand on knee, Barry levered himself up from the low bench. He frowned at the ground. ‘I haven’t got six grand! Debt up to my eyeballs, defaulting on everything. No sales in three months!’ His cheesy finger was pointing in all directions. ‘I could lose my own friggin’ home! Tillerman says if I don’t cough up for the bins, she’s gonna renege. Take down my picture in the foyer. I put everything I had into this deal. Whatever happened to full disclosure? They all knew. That’s the only reason the last friggin’ official sponsor finally gave it up. Of course it’s obvious now. Scorched earth policy.’

I honked in disagreement. ‘The last agent lady helped them. All the people are cosied up broody now in houses they like. Isn’t that your job?’

‘I run a business. Contented, settled . . . that’s the last thing any of us want, that last sponsor included. Now they’re a bloody community, no one’s going anywhere. My only hope is for some old nonna to finally cark it and hope like hell the grandkids don’t move straight in.’

I wasn’t sure how to respond. His talk was all inside-out.

The skin of his cheeks had gone from raw dough to leg ham, his forehead looked squashed. ‘And you knew about it too, you filthy tip-turkey. Why’d you wait till now to speak up, huh?’

That taunt always stung. Still, I’d been called worse. I picked at a mite near my toe.

Barry’s knees clicked as he sank back down on the bench. His head flopped against the wall behind him. Staring at the sky, his clenched fists perched on his lap. ‘I can’t sleep. All night I fantasise about setting fire to wheelie bins, slashing tyres, tagging front fences . . . shake them all up a bit, you know? Tried warning them about the big bloody tunnel and off-ramps, but all they do is dig their heels in more.’

I shrugged my wings. I thought about those new V-word bins that weren’t going to happen and the sponsor face picture coming down.

He sat up and looked right at me, all fighty again. ‘Meanwhile you strut around like you own the freaking place. Filthy parasite.’

I stood as tall as I could, and was about to explain that the word is scavenger, when the home-time bell ring-dinged. It was time to get flappy before the swarm. I picked up my Cheesymite and glanced back at Barry, but something had changed. He stared past me, having retreated inside his head the way mammals do when they can’t face what’s coming. It was an expression I’d last seen on the face of an elderly, milky-eyed beagle, unaware he’d just wandered onto Parramatta Road (I hadn’t been able to help him either).

Taking flight, I looked down at agent pizza base sponsor on his bench. Strut around like I own the place? A lump of indignation made its way up my ropey throat. I took aim, and with a flick of my beak, hurled the Cheesymite down at the agent’s head.

The roll landed with a stale bounce on the bitumen near his feet. He didn’t even look up; he was worse than the blind beagle. I immediately regretted wasting my lunch on him, but it was too late to retrieve it. Offspring were filling up the quad and even the pigeons had fled. I flapped off in the direction of the local shops (the bin behind the convenience store is fairly reliable).

The human was a hopeless case. If his agenty-eyes missed a Cheesymite falling from the sky, it’s not surprising he didn’t notice what was happening to the neighbourhood.

Little Fictions run regular events where actors read writers’ stories and give them added life. There will be a repeat performance of Little Fictions’ ‘Humans of Parramatta Road’ as part of the Site + Sound Festival on Thursday May 11, 7:00 PM – 10:00 PM, Leichhardt Town Hall, 107 Norton Street, Leichhardt. Tickets $15.00.

The Ibis and the Real Estate Agent – fiction 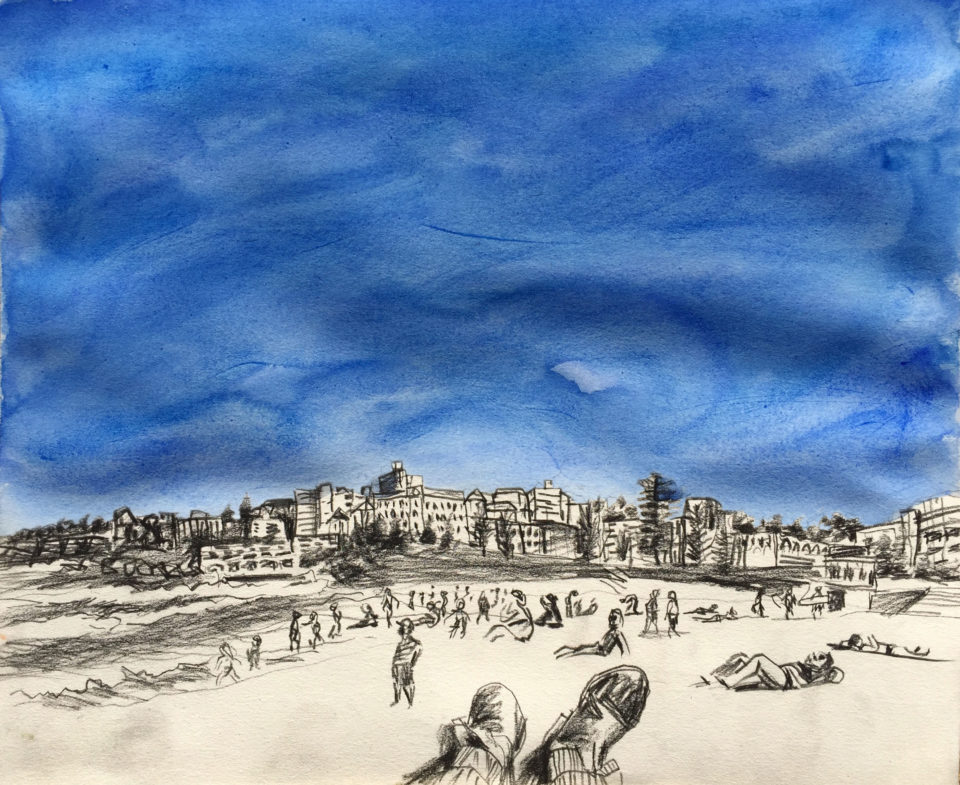 Growing Up In Bondi poetry
by Adam Gibson
And the milkbars were still standing and at Valis’s and Raffle’s and Bill’s you drank thickshakes and played the pinnies...
Full Article
Features 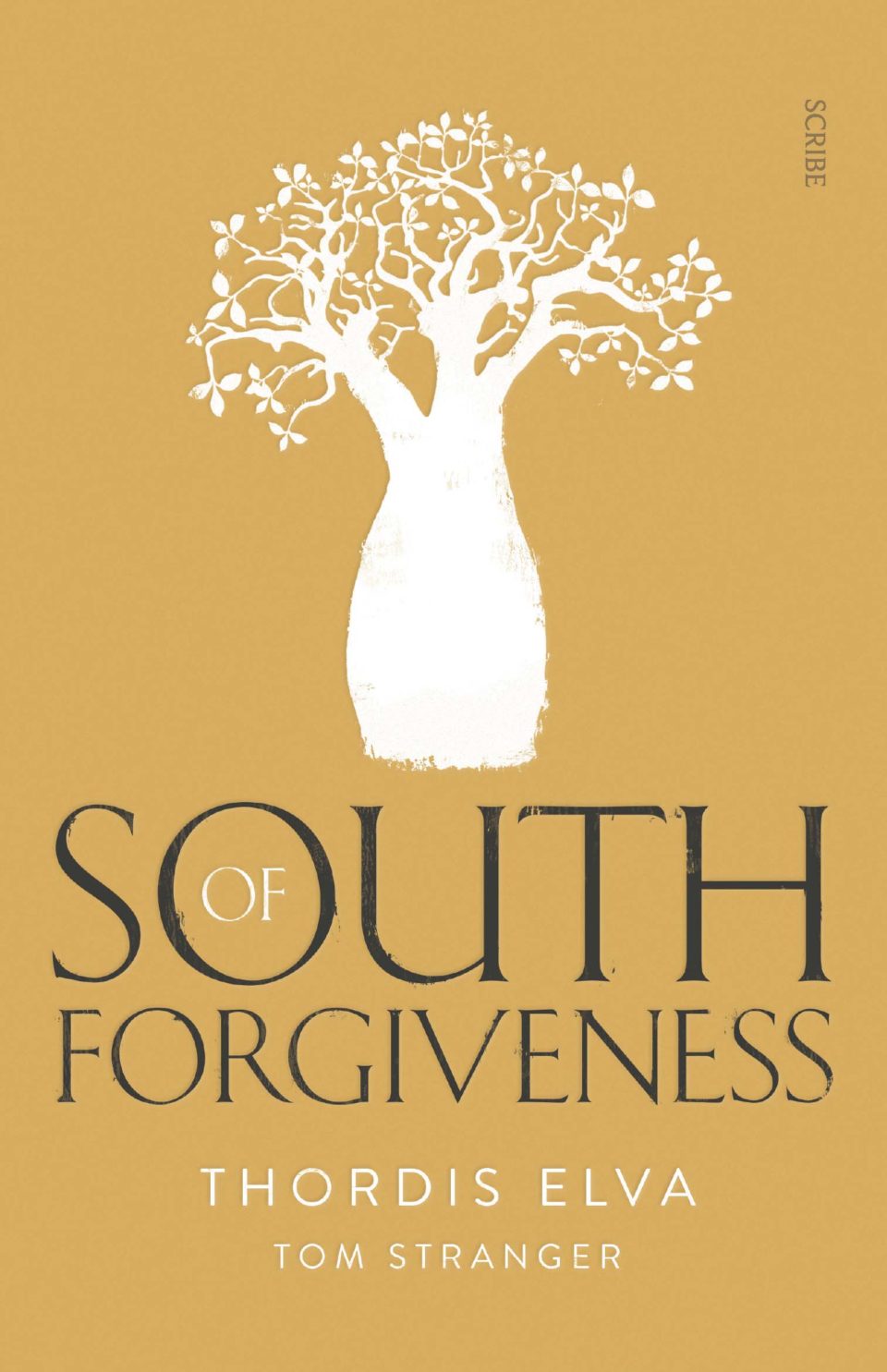 South of Forgiveness A rape. A book. A conversation.
by A.H. Cayley
This article discusses sexual violence.
Full Article
Expression 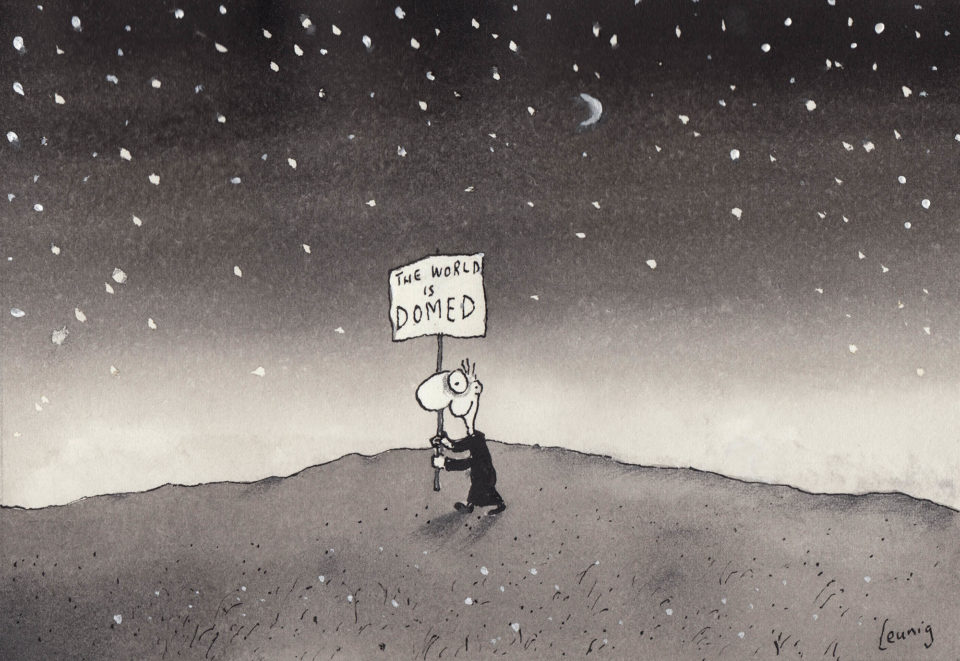 Encyclopaedia Botanica
by Tug Dumbly
The real magic lay in the way the words wove together. There were moments of ravenous joy and molten rage; massive metaphors that snaked out, slippery and sinuous, like great root systems.
Full Article
X