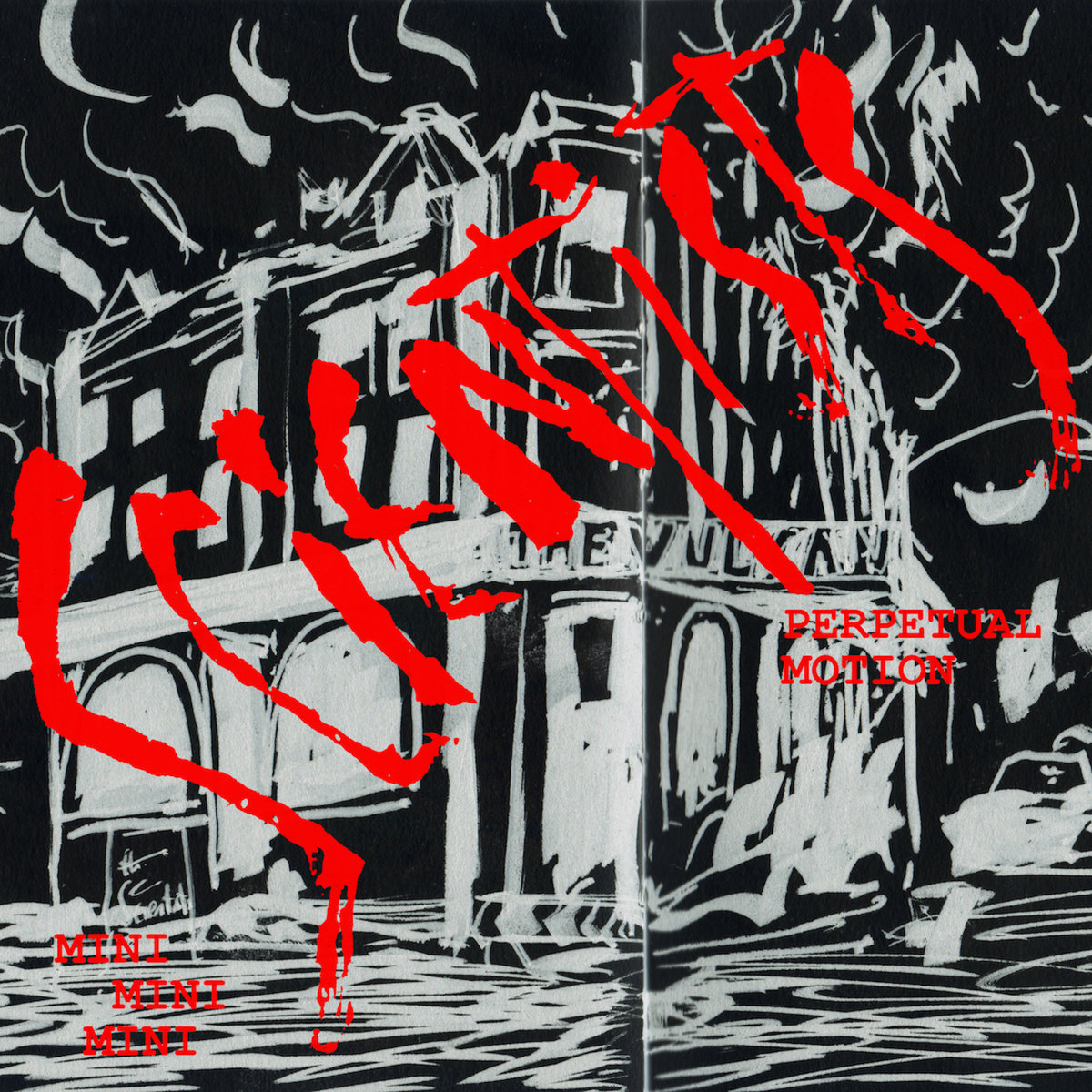 Kim Salmon regroups the mid-‘80s line-up of The Scientists for the band’s first single in 30 years and a November tour.
Text: Aaron Curran Facebook Twitter Email

“Sydney was a different city then. The mood was one of space and possibility… with plentiful spaces [for musicians] in the ruins of a past city. Abandoned buildings, unloved terrace houses, old working men’s clubs with dwindling clientele [offered] a productive emptiness. Music can be a good way to time travel [and] I imagine I can hear the Sydney of that time in its music. Songs made to fill empty rooms.”
– Vanessa Berry

Vanessa Berry’s new book Mirror Sydney is an intriguing excursion into lesser-travelled areas of the city and suburbs, not least because so many of the places she features are abandoned, unknown or (almost) forgotten. She illuminates a “shadow” Sydney in writings and hand-drawn maps that are a testament to “the radical potential of taking notice”, creating alternative viewpoints of what is and was culturally important, and giving voice to the memories and environments of the communities who live(d) here. Her long-running blog of the same name features some fascinating music-related editorial, like this piece on Pel Mel and the post-punk scene, or this playlist of songs that conjure up locations and landscapes across this changing Harbour City.

Tropical Fu*k Storm is the latest project from Gareth & Fiona from The Drones, joining with mates Lauren of High Tension and Erica from Harmony. While this is Sydney’s first chance to hear them live, they’ve just returned from touring across the US with Band of Horses and King Gizzard & the Lizard Wizard, so they’re already match-fit and firing. Their first Lansdowne show sold out quickly so don’t dither if you want to attend the second on Sunday 26 November. New single ‘Soft Power’ has just been released by the Mistletone label and it’s as unruly, droll and vituperative as debut ‘Chameleon Paint’. Both vinyl 7” releases feature the band exploring “Australian songs we wish we’d written” on the B-sides, making lesser-known gems from The Nation Blue and Lost Animal their own. Gareth Liddiard has also made NEIGHBOURHOOD Paper a mixtape of the band’s favourite Australian songs and we’ll be sharing that here very soon.

8. The Clouds/Falling Joys, The Stems/Rocket Science, The Scientists at Factory Theatre

What’s an appropriate collective noun for alternative rock reunion concerts? A garage of…? Well that’s November at The Factory in Marrickville. The guitar-swirl harmonies of The Clouds and pals Falling Joys kicked off proceedings with two sold-out shows. Then mid-month The Stems celebrate the 30th anniversary and reissue of At First Sight Violets Are Blue, their chart-hit debut which owed as much to snappy ’70s power-pop as it did underground ’60s garage rock. Frontman Dom Mariani has enlisted the redoubtable Davey Lane and Ash Naylor to bolster their paisley-patterned songbook, and they’ll be supported by Rocket Science. On the same weekend, Kim Salmon regroups the mid-’80s line-up of The Scientists to kick the stuffing out of scuzzy anthems like ‘Swampland’ and ‘We Had Love’, along with their first new single in thirty years, a delinquent cover of Jacques Dutronc’s ‘Mini Mini’. The world finally seems to be cottoning onto The Scientists, as recent reissues on the Numero label like last year’s A Place Called Bad compilation got rave reviews internationally. 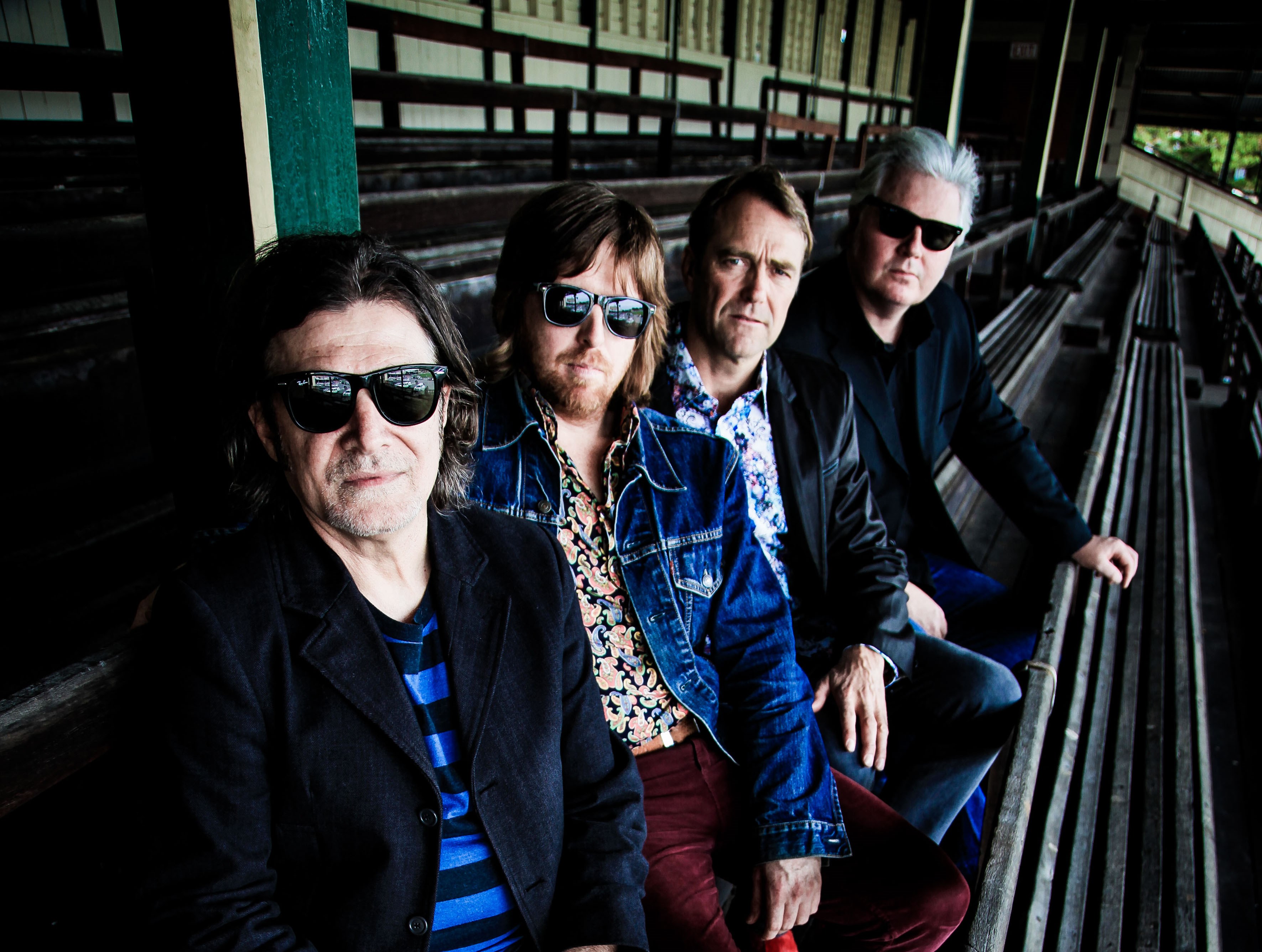 Also at the Factory in November is Ed Kuepper’s brass-fuelled return to his earliest songs and first band The Saints, but that’s been sold out for months so your best bet for a ticket is his second gig at the Bald Faced Stag on the 23rd. These live shows sync with the 40th anniversary of the release of The Saints’ 1-2-3-4 EP, which memorably included frenetic covers of ‘River Deep Mountain High’ and ‘Lipstick on Your Collar’, which you may well hear on the night. That this Aints tour is selling so well is testament to the nation’s ongoing interest in one of our finest bands, but don’t forget that the ever-prolific Kuepper has released many quality albums that are still under the radar, like Jean Lee & The Yellow Dog, which celebrated its 10th anniversary last month. Back in 2007 this was Ed’s first album of new material in seven years, a concept LP about the last woman to be hanged in Australia. Jean Lee is an overlooked jewel featuring some of his most evocative songs and distinctive accompaniment from guests like Warren Ellis (Dirty Three), Peter Oxley (Sunnyboys, also The Aints), and Jeffrey Wegener (Laughing Clowns). 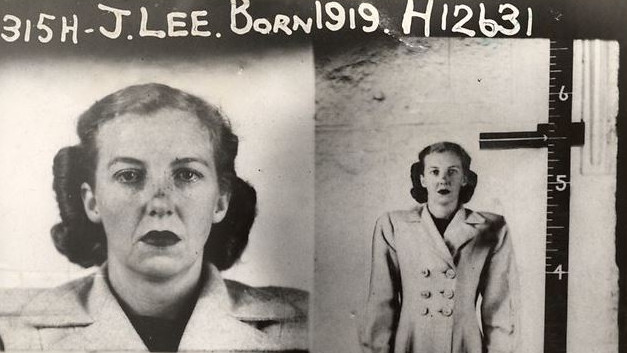 When did Loene Carmen first break your heart? Was it her teenage debut as wild-eyed Freya, when she chose damaged Trev over Danny in John Duigan’s The Year My Voice Broke, screening in Australian cinemas thirty years ago this month? Or as poor doomed Sallie-Anne Huckstepp in TV classic Blue Murder, strangled and drowned in Centennial Park’s Busby Pond? Or maybe it’s her voice that did you in, curling like smoke across a lifetime of music with friends like Automatic Cherry, Mick Harvey, and The Cruel Sea, or her own catalogue of country death torch songs. New and sixth solo LP, Lovers Dreamers Fighters, was recorded at The Butcher Shoppe in Nashville and includes the enervated grind of single ‘Sometimes It’s Hard’, her duet with Bonnie ‘Prince’ Billy.

The heady, incense-fogged year of 1967 saw much fruitful fusion between Eastern and Western music forms, like Ravi Shankar meeting and influencing The Byrds and George Harrison, and jazz investigations into Asian and Indian scales from John Coltrane, Yusef Lateef, and Joe Harriott. Explorations of a similarly pioneering nature were taking place much closer to home, for 1967 also saw the release of Sydney saxophonist/cellist Charlie Munro’s Eastern Horizons, a mod masterpiece and much-sought after rarity on the Phillips label that has just celebrated its 50th anniversary. John Clare calls it “arguably the most striking and powerful album (in all of) Australian jazz … (but) nobody seemed to take much notice of it”. Make an effort to track down a copy and you’ll be hooked by its unconventional and celebratory openness, its swinging carefree drive, with tracks like ‘Islamic Suite’ exploding with all the colour and movement of a bustling spice market. 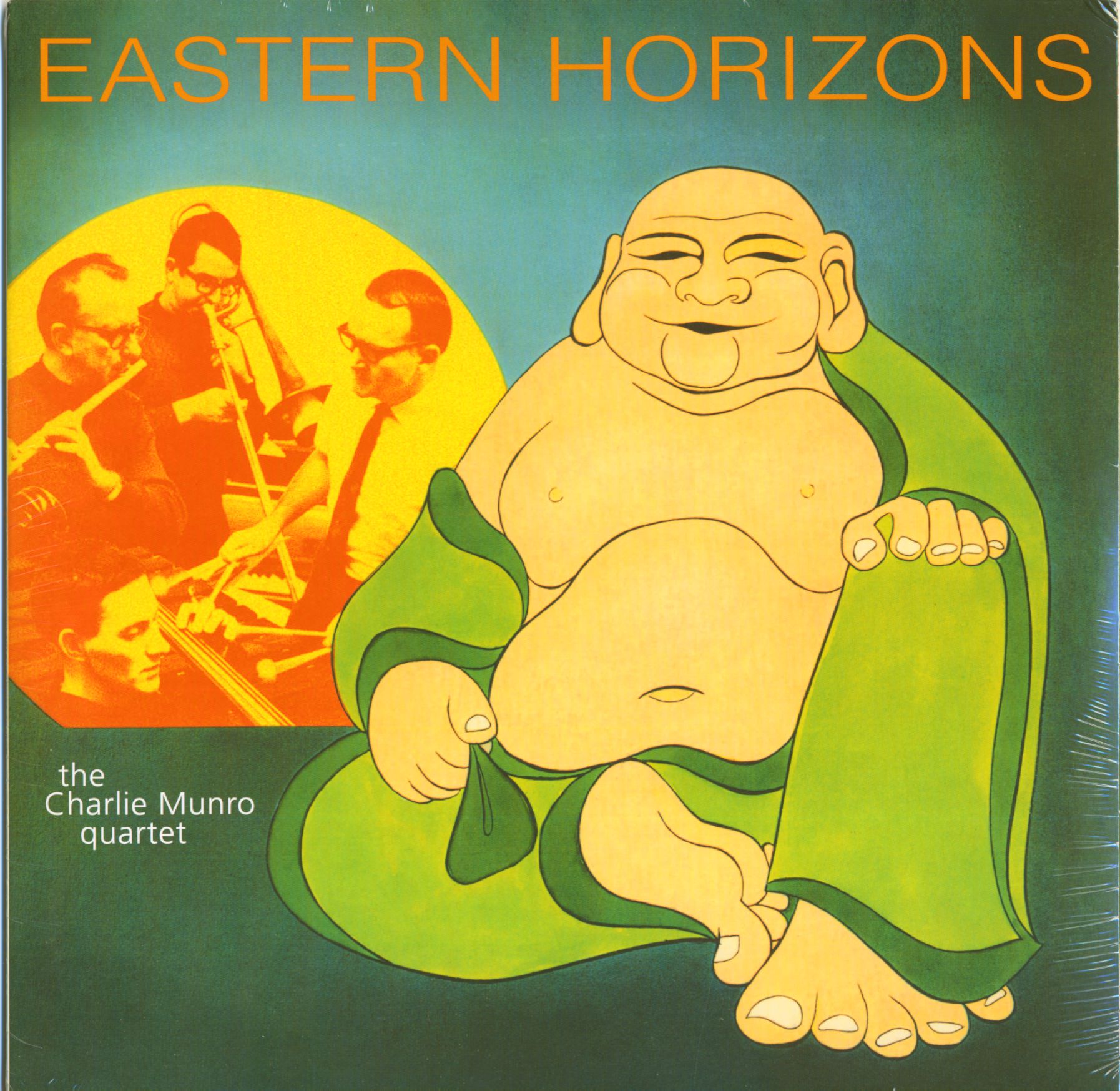 The original cover of ‘Eastern Horizons’.

Efficient Space is the archival offshoot of label Noise in My Head and has attracted global attention with compilations of rare Australian electronic and DIY music like Midnite Spares and Oz Waves. Their latest release, 1-66, is by Andy Rantzen – a.k.a. Itch-E of ARIA-award winning ‘90s dance/techno duo, Itch-E & Scratch-E – an EP of digital dub that has been sitting in the vaults since 1999. Home recorded “above a lawyer’s office and next door to a brothel”, this EP is an atmospheric excursion into bass-heavy, glitch-and-delay-friendly territory that bears comparison with the work of the great Sheriff Lindo, who often played with Rantzen and bandmate Paul Mac at Itch-E & Scratch-E’s live shows.

A moody double A-side of organ-driven psych-pop capturing downbeat but catchy responses to the Vietnam War and conservative society, this is a crucial addition to any discussion of notable Australian singles from the 1960s. From Bendigo, the band chose a name with a political dimension and interesting history. The original Tol-Puddle Martyrs were a group of 19th-century labourers in Dorset, England, who were arrested for forming a union to improve their own working conditions. Convicted on trumped-up charges, they were sentenced in 1834 to penal transportation to Australia. But the outcry in the UK against this injustice was so great – with massive protest marches through London and a petition of 800,000 signatures to Parliament – that they were pardoned two years later.

2. Underground Lovers at The Rose, Chippendale; The Double and feedtime at The Lansdowne Hotel.

These days it is standard operating procedure for musicians to gratefully take money from corporate patrons but two recent Sydney gigs showed the awkwardness of some arrangements. Last month’s The Double/feedtime Lansdowne show was sponsored by a US beer company throwing a Halloween party promotion aimed at younger punters, with the unusual result of grizzled aging art rockers bringing the noise onstage to a half-empty room of fake blood-covered, costumed teenage nubiles, while fans of the bands were turned away at 8pm from a “full house”. The day before, the Underground Lovers had been invited to Chippendale for a free gig to promote the AMP Music Awards, a mutually-supportive arrangement with costs seemingly offset by another beer company. But it must have been challenging for the Undies to do their bit, performing in front of beer logos and behind a pool table and oblivious locals picking up their pizzas and burgers from the kitchen next to the ‘stage’, while the band bashed out songs from their abundant 2017 LP (and AMP award-nominee), Staring at You Staring at Me. Who could blame singer Glenn Bennie for changing the lyrics of the chorus of ‘Takes You Back’ to “feeling like a corporate clown”?

The Double playing at the Lansdowne Hotel. Photography by Doug Maloney.

“[Flash and the Pan] is carte-blanche. We can take pretty much any approach we like: orchestrated, strange and poetic, far out, rocky, big band. Anything goes.” – George Young, Billboard 1981

The depth of affection felt for The Easybeats and AC/DC ensured that the sad news of George Young’s death at 70 last month was dominated by considerations of his essential contribution to both bands. However his impact on Australian music, with partner Harry Vanda as songwriters, producers and performers, was much more expansive and curious. Like Don Walker, I’m particularly fond of Flash and the Pan, their undervalued studio-only project whose first single, ‘Hey St Peter’, turned 40 last year. One essential element was George’s spoken word vocals but otherwise Flash and the Pan consciously eschewed the formulas that the duo’s other productions rigorously adhered to, using diverse instrumentation, exploring different genres and the limits of then-new music technologies. As Vanda bluntly put it, “the shackles were off and we could piss around as much as we liked”. Consider them alongside eccentric pop acts like Sparks, Godley & Creme, or The Art of Noise. Not every experiment holds up but post-disco pop tracks like ‘Midnight Man’, ‘Waiting for a Train’, ‘Ayla’, and ‘Walking in the Rain’ (which Grace Jones famously made her own) reveal wit, atmosphere and innovation not just novelty. 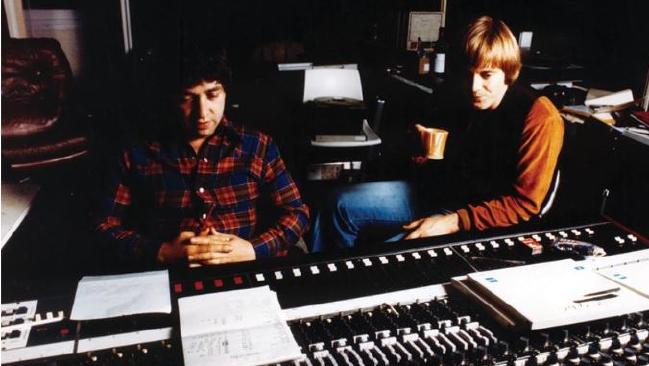 Listen to the Unmarked Tracks playlist: 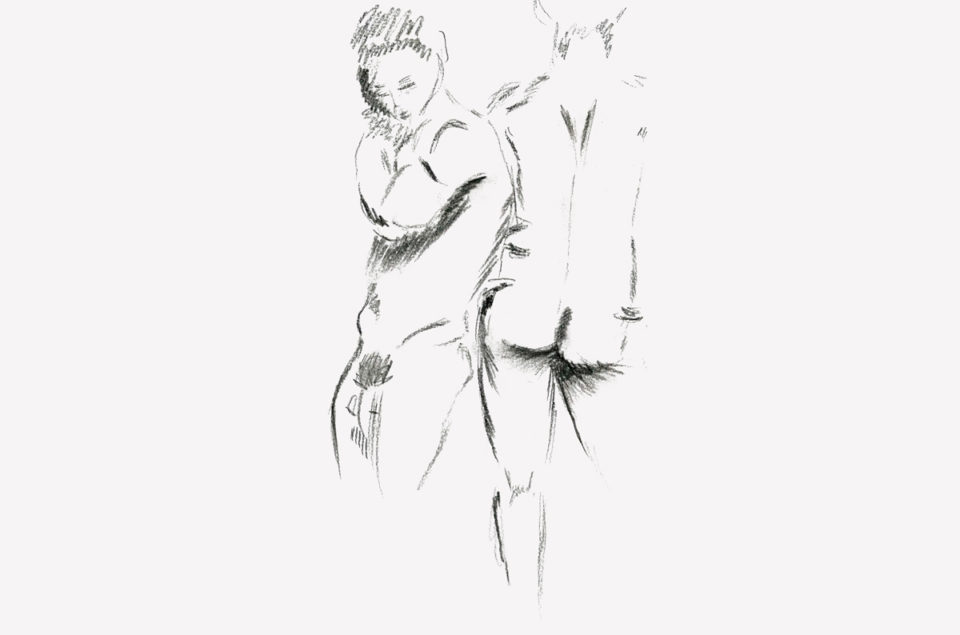 Life Drawing Class Finding the naked truth
by Matilda Gould
There’s a sudden and unexpected intimacy that comes with being the custodian of someone’s nudity...
Full Article
X