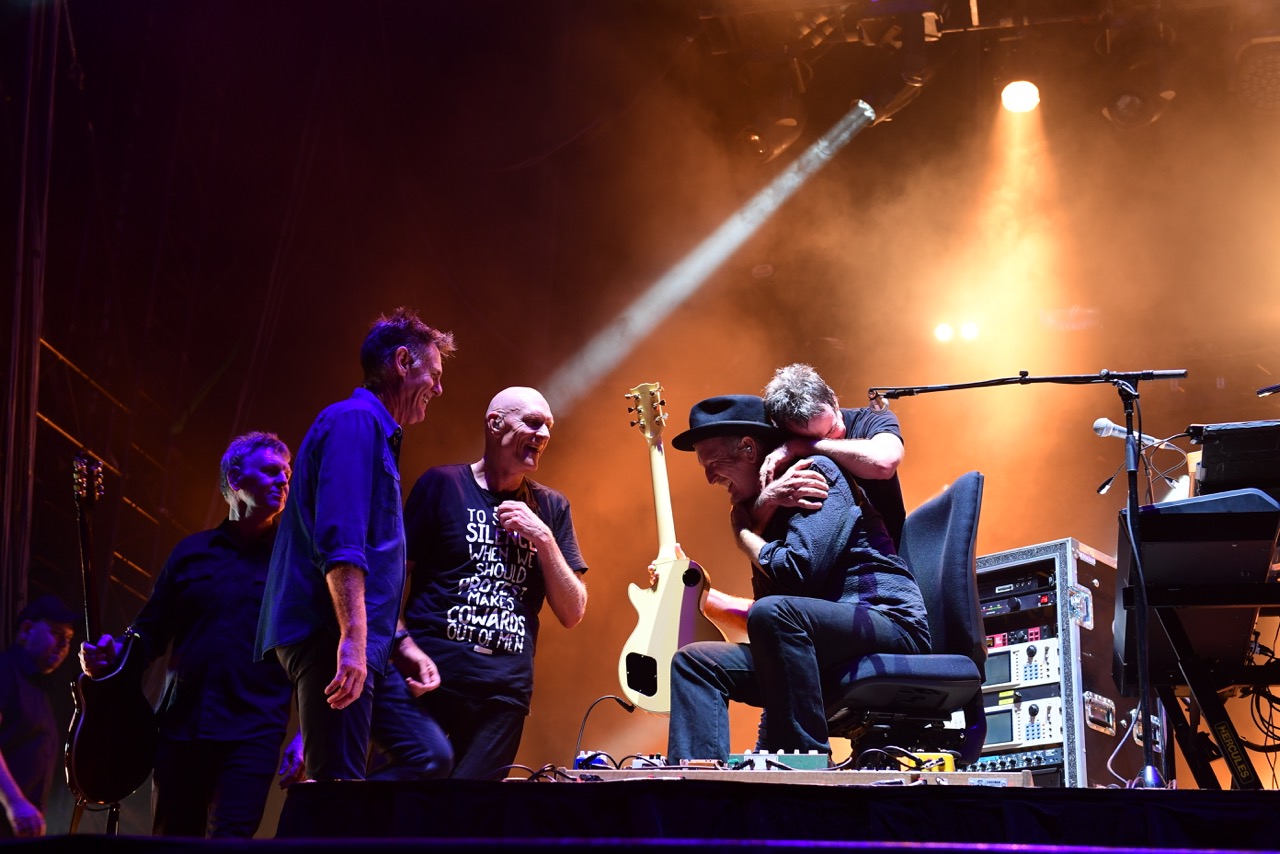 Group activities aren’t my thing. If a bunch of people is heading in one direction, I am heavily inclined to go the other. But when it was announced that Midnight Oil – a band I have been devoted to since the early 1980s when all my friends in Bondi had the ‘Oils hand’ stencilled onto their surfboards – were going to do a show on November 11, Armistice Day, it soon became apparent that I was going to have to go with the gang.

Plans were made, schedules were aligned and before I knew it, a stretch Hummer had been arranged, bespoke t-shirts had been printed and 16 friends from Bondi were meeting at a mate’s place on Beach Road at 2pm to get primed for the event.

There was no turning back so the best approach was to go with it and try to enjoy the shared experience of immersing ourselves in the music of the band that had shaped our generation. Into the Hummer we 16 climbed. An architect, a paramedic, a teacher, a swimming instructor, a garbo, a pub owner, a real estate agent, a journalist, among others – not some yobbo horde but a collection of old friends long-dedicated to Midnight Oil. And dressed in the same shirts.

A bloke named Zac was the Hummer driver. I’m not sure what Zac’s other jobs are but I’m fairly certain he moonlights in a number of different fields judging by the tattoo that was just creeping over his collar and a general sense that he knew a thing or two about a thing or two. The Hummer itself had a slightly stale air, as if recently used for a particularly eventful hen’s night or messy buck’s party, the complimentary champagne definitely not from the Champagne region and the plastic cups making a distinct crunching sound when sat upon.

In the short time it took to get to the Domain, the bubbly had been drunk but the claustrophobic environs had taken some of the fizz out of me. We were poured out onto Hospital Road with Zac fretting about the need for a good turning circle ahead so he could get the Hummer out of there effectively. We left him to his own devices and joined the throng heading past the Dutch Masters exhibition at the Art Gallery of NSW and into the vast fenced-off area of the Domain. 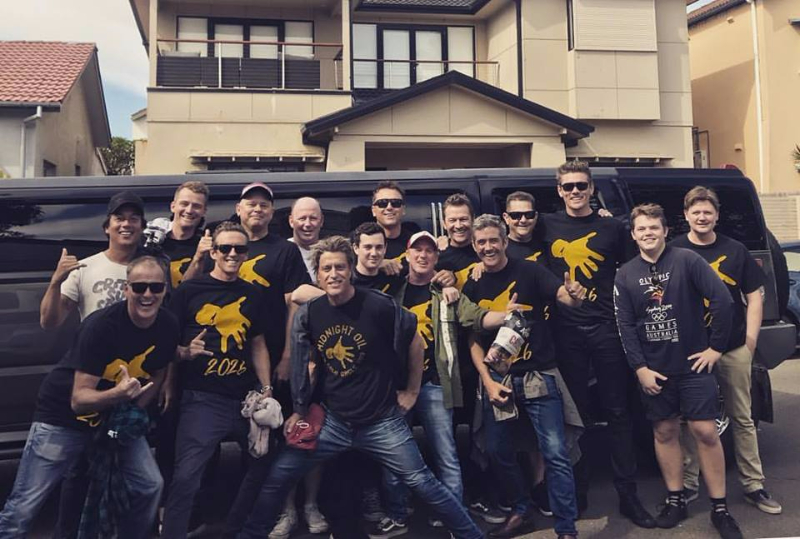 That day in the Sydney Morning Herald there had been a story quoting Paul Keating saying Peter Garrett should be ashamed that his band were “squatting” on the Domain for a week for their two concerts.

For once I disagreed with Keating and in this instance saw him as a nark. Paul, this is Midnight Oil mate, a Sydney band, arguably Australia’s greatest ever band (personal opinion, I know) and they’re here to bring their clarion voice back to the city like the ghosts of the old Domain Speakers’ Corner rabble-rousers that I believe still haunt the nearby Moreton Bay figs.

We were nice and early and the opportunity presented itself to head to the front-of-stage barrier. We secured our position there, all 16 of us, and we were all ready for the Oils.

Only problem was, it was 4.30pm, broad daylight, and they weren’t due to start until 8.30pm. A few drinks were thus consumed to kill time but in a neatly effective move, the toilets were positioned at the far end of the Domain, meaning the beer-to-bladder ratio had to be very carefully managed. As the crowd filled in around us, it became increasingly difficult to get either out or in, so one had to walk a fine line between getting on the piss and/or going for a piss.

A.B. Original was the first support and they did their best in bright sunlight to rev up a crowd that hadn’t yet got into the swing of things. It was a tough audience that I’m guessing hadn’t seen much hip-hop performed live on a big stage such as this – and didn’t really want to. Call me old-fashioned, but there’s also only so many times I can take hearing the word “motherfucka”. But with a huge exuberance and a war-chest of sharp lyrical barbs they won over several sections of a restless crowd, notably on their version of Paul Kelly’s ‘Dumb Things’ and a possible alternative Australian anthem, ‘January 26’. No doubt their “audience selfie” at the end won’t be their last.

The John Butler Trio were up next. Whilst most Midnight Oil fans would see themselves as open-minded and accepting, I’ve often felt sorry for support acts at their gigs. They can end up as mere cannon fodder for an audience eagerly awaiting the Oils and unwilling to embrace anything else. On this occasion however I felt Butler and co’s stadia-savvy experience really won through, his tight set highlighted by masterful 12-string guitar playing as the sun set over the CBD. Sometimes too, it’s only when you hear songs as part of a big crowd like this that you realise just how good they damn well are: ‘Zebra’, ‘Better Than’ and the instrumental ‘Ocean’ taking flight across the Domain as initial toleration for Butler turned to wide enjoyment and anticipation built towards that hard-act-to-precede act, Midnight Oil.

On a key Midnight Oil Facebook fan page, Powderworkers, there had been lengthy discussion about the possible contenders for the night’s setlist, much of it focussed on at which point the song ‘Armistice Day’ would be played, because surely it had to be. An obvious position was first, but Midnight Oil have never really chosen an obvious path so it remained uncertain if that would play out.

But as the smoke machines flicked on, as the lights began to pulse and the band took the stage, a low frequency drone emerged, soon morphing into the identifiable opening note of the iconic song from 1982’s Place Without a Postcard album. Out of the semi-darkness, the unambiguous figure of Garrett appeared. He was followed shortly after by the equally distinctive crunching guitar riff of ‘Armistice Day’, Garrett striding to the end of the extended stage dressed in a black Midnight Oil hoodie, the hood pulled right over his head, his face barely visible, a glint of his blue eye catching every now and then in the spotlight.

It was an astonishingly powerful image. The black dressed figure in the spotlight, initially motionless as the verse approached, the entire crowd then yelling every word along with him when it arrived. Instantly we were locked in the grip of crowd and song – a massed unit of women, men, and kids forged together as the smoke machine mist swirled in the nor’easter and the bewildered Botanic Gardens bats scattered to Centennial Park. 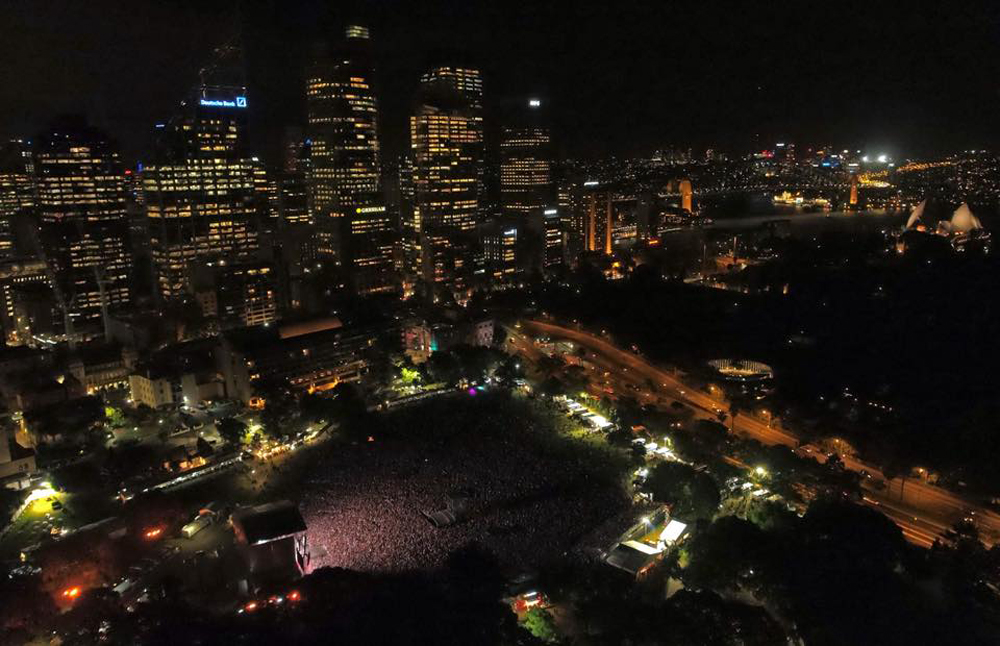 The Domain from above, the night of the gig. Image source: Midnight Oil’s Facebook page.

My own group, some a little worse for wear after an already long day, connected with glances and smiles and I was glad we were all here together, quickly realising my voice would be screamed hoarse by the end of the night.

What followed was a bombardment of anthems, songs which it is not an overstatement to say are embedded in the hearts and minds of many. ‘Read About It’ was a searing, chanted blitz; ‘Hercules’ sparking with its punk rock urgency not diminished by 30 or so years; ‘Put Down That Weapon’ still anthemic in its measured intensity; into the chug of ‘Truganini’; and then my gang’s legendary favourite, ‘Section 5 (Bus To Bondi)’.

Oh my goodness. ‘No Time For Games’, ‘Short Memory’, ‘Only the Strong’, ‘US Forces, ‘Kosciusko’, ‘Don’t Wanna Be the One’, ‘Beds Are Burning’… are you kidding me? The show was almost overwhelming in its power; incendiary and beautiful rock ‘n’ roll that made you want to dance and sing but, of course, at the core of the Oils, made you think about something more. Made you think about your life and the planet and the world around us.

Yes, these are muscular, perhaps ‘masculine’ songs. But whilst initially embraced by a surfie/blokey coastal culture, a culture my friends and I obviously come from, Midnight Oil have long connected with a much wider audience, male and female. Their volume and power isn’t mindless; it’s underpinned by an intense melodic sensibility that exudes a strongly positive and inclusive nature. Indeed, Garrett’s repeated ejection of overzealous fans (let’s face it, exclusively men) throughout this tour, and the easily equal numbers of both sexes crammed up the front at the Domain was evidence of this desire to connect.

For two solid hours the band did not let up. Not even guitarist/keyboardist Jim Moginie, hobbled by a ripped hamstring and forced to sit in a specially designed multipurpose pod. From there, Moginie unleashed the sonic brilliance that many believe has long been the key to the band’s sound and success. Using an array of pedals and often balancing a guitar on his lap whilst simultaneously playing keys, his injury was no hindrance to what I believe is his inherently punk rock approach, allowing Moginie licence to mess mightily with these iconic songs and enhance them.

The highlights were many and the night was long. At some point it occurred to me that the unifying nature of Midnight Oil’s songs, their widespread resonance and the sheer number of tunes known by so many people, means that a show such as this (which was to be among the last of their 70-plus date tour) may never happen again.

Only Cold Chisel rival them in terms of songs and recognition, but even then I would argue the breadth of the Oils’ reach exceeds them. You’d have to think that, with members all in their 60s or thereabouts and after a mammoth undertaking that nearly came undone with Moginie’s torn hammy, such a visceral, uniting concert as this under their hometown skies is unlikely to reoccur.

Footsore and weary, my group convened briefly in our matching shirts and then interminably dispersed. I was left with a small core of close friends. We rued the fact that Zac and his stretch Hummer were long gone as we trudged off towards Stanley Street in Darlinghurst – a coffee and a gelato at Bill & Tony’s not being a total rock ‘n’ roll way to end the night, but bloody satisfying nonetheless. There we sat, exhausted and thrilled, talking over the highlights of what had happened, the sounds and memories of our past and what united us as friends, and all those songs that were still alive inside of us. 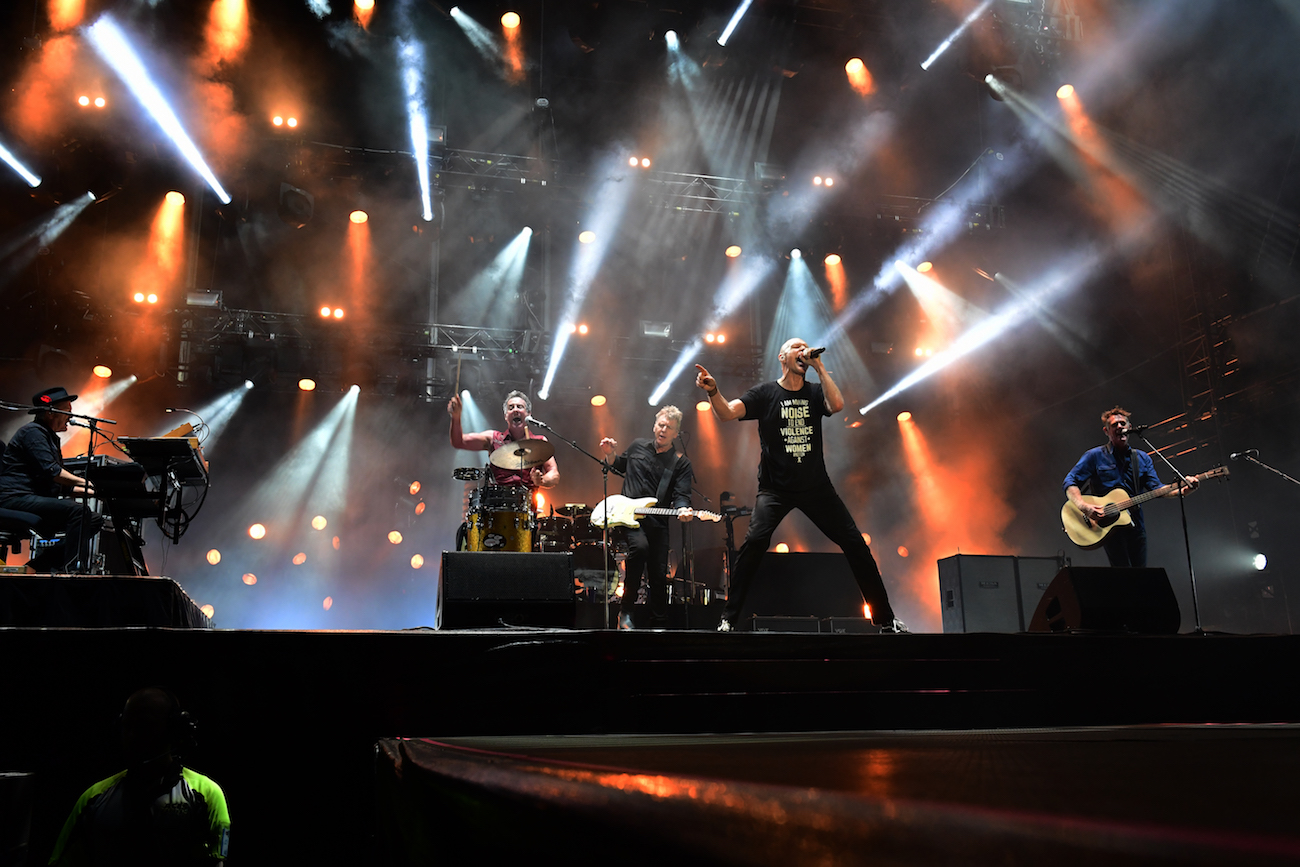 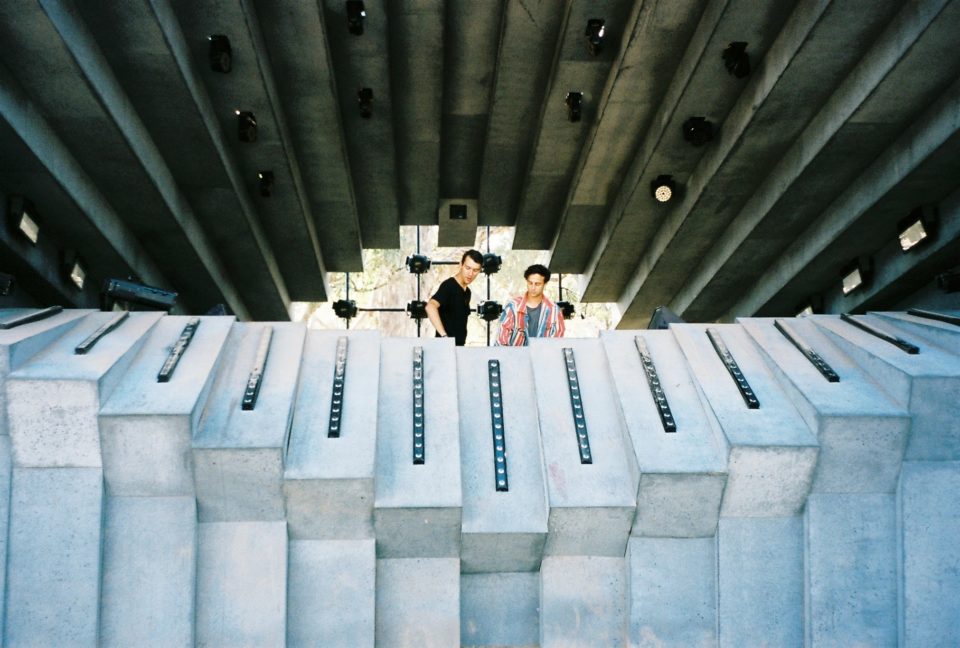 A Sound Which Never Existed Electronic journeys with Albrecht La’Brooy
by Drew Rooke
“We’ve always tried to stay away from a particular sound which already existed...we have always been more interested in creating our own sound that is different and unique.”
Full Article
Culture
Interview

The Ghost in You An interview with HTRK’s Jonnine Standish
by Aaron Curran
Virtual reality, digital narcissism and dead friends: musician Jonnine Standish is riding a new kind of ghost train into town.
Full Article
Culture

Living Colour ‘Virtual Vibration’ on MCA’s facade
by Cordelia Williamson
“Colour is on the surface of everything around us. It’s the filter between seeing and experience.”
Full Article
X