“At the intersection of the Boulevard St. Michel
and the Rue Cujas, the sidewalk slopes a little.
Beautiful, fervent days of youth, I haven’t
lost you…”
from Paris, by Miklós Radnóti

I had come to Paris because my life was a mess. I had come to Paris to sing. Early in that broken-down year of 2009, my birthday had turned up with its usual gift of questions it had for me for ten years now, questions I had never been able to answer. I had been given another year yet my son Riley, who had died just short of his fourth birthday in 1999, had not. Why had I been given every chance at happiness when he had been given so few? Never another birthday. The years that should have been his – where were they?

People like to think loss doesn’t last, that grief and its shadows follow some timetable and fall away. And while it’s true they fade, inside you nothing is changing. You get busy, not better – or you get better at least, at disguise. You give nothing away. And then a day comes, an anniversary perhaps, and something hits hard and the appearance you have built up comes tumbling down. You were a Russian doll of secrets who ended up in pieces. I ended up in Paris, years after I had turned my back on a public musical life when my boy had become sick, because a French journalist, Emmanuel Tellier, had asked me to come and play some shows. I have been forgotten, I told him, No one will be there. He simply said, Trust me.

When the lights of hope had gone out, a man in Paris was offering me a rope. And I would use that rope and climb out of the hole I found myself in. I slept that night on a pillow of doubt. The next morning I wrote back to Emmanuel: I am coming to Paris.

On the Eurostar from London – I had to get up at 5am to catch the train – I fell asleep crossing the Channel and woke as we emerged into sunlit blue and white skies of France, a stream of fields and green farmlands rushing past the window. London, its grim greyness that inhabited every sky, building and street, disappeared from my mind like smoke.

I had a wonderful place to stay. A friend had a small apartment in the 5th, and while she and her family had moved to Tunisia, they kept the place empty so that they could visit Paris whenever they wanted. The first morning I went walking, just around the corner I found a plaque: Paul Verlaine lived here. Another marked James Joyce’s house, Hemingway’s. The next night I found that, though there were over 2 million homes in Paris, Emmanuel lived just two streets away. None of this could have been planned. Destiny was at work.

A week later, it was raining in Paris, it was a holiday and it was 11th November – Remembrance Day, 2009. Autumn. Sometimes in Paris the rain was beautiful and as I moved through it, I would write letters in my head to people who weren’t here anymore. All along the avenues the chestnut trees were losing their leaves. Our concert was that night, and in the late afternoon I walked to soundcheck at the club l’Européen and saw an old man on rue d’Amsterdam with gold in his teeth and a blue cornflower in the buttonhole of his jacket. Who did he want to remember?

That night, in a Paris room in which I felt I no longer knew how to talk, I discovered how four hundred people had together created a kind of sanctuary, there among the low lamps, the piano, the flugelhorn, the guitars and tambourines, so that the old songs could sing themselves up out of the past. All I had to do was step out of the way. In Paris, a miracle in the rain.

A year later, I was invited by a French music magazine, Magic, to play a show on their rooftop. This was not long after I had released a duet with a French singer, Natasha Penot, which had a line it “and your song floats down over the town”. The magazine’s editor Christophe Basterra, listening to the song over a glass of wine, decided it would be a good idea to hear it sung live – and from a rooftop. The songs would float down over the town and the town would be Paris, on the night of the Summer solstice – the longest day of the year. This kind of whimsical, fantastic thing would not happen for me in Australia – in Paris, it did.

So I flew over and stayed in a small hotel in the 6th on rue Monsieur-le-Prince, only later finding out it was the street in which so much of the decadent action in Sartre’s The Age of Reason takes place – the nightclubs, restaurants and bars. Then somebody told me that the nouvelle vague was born at the cinema called Les 3 Luxembourg just across the street, which seemed too good to be true – mainly because it was too good be true.

My wife had read The Age of Reason for the first time during the Summer, and then I read it as well, in translation, the same way I read everything French, just as I watch French movies with subtitles. Most of the people in Sartre’s story were caught in the chaotic whirlwind of their 20s, trying to work out their lives – what to do, how to get ahead, who they are. Though it’s set in 1938 and Saint-Germain-des-Prés, it could have been written yesterday, and could be any city around the world where people are that age. The confusions live on.

There have been other scenes in other years, other times when Paris has seemed to work on me like a spell. Rounding a corner in the Montmartre fog, lost, looking for a street that Jean-Pierre Melville had shot Bob le Flambeur on and suddenly finding myself instead on Rue Cortot, where Satie had written the Gymnopédies when he was just 23. Three songs in three months, between the dregs of winter and the spring of 1888. Songs the world would always remember which Satie, in his later life, wished the world would forget. Or strolling down the Quai de la Tournelle, the green boxes of the bookstands being taken down and crossing Pont Alexandre III for the first time, with the streetlamps coming on and the warm, glowing light in the restaurant windows and thinking So this is how the evening comes to Paris.

After we had played the rooftop that night, I was speaking to a girl who, someone told me, had been proposed to by Julian Casablancas from The Strokes. He wanted her to elope with him to New York. For some reason, I decided to ask her if this was true. “Julian Casablancas…maybe,” she said “But leave Paris?? Never.” 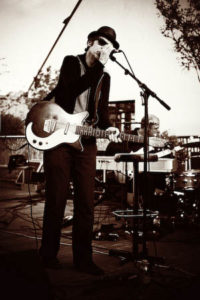 The Apartments’ Peter Milton Walsh and Eliot Fish are playing in the intimate setting of Django @ Camelot in Marrickville, on Sunday 22nd April. Doors 7pm. Jep and Dep 8pm, The Apartments 9pm.