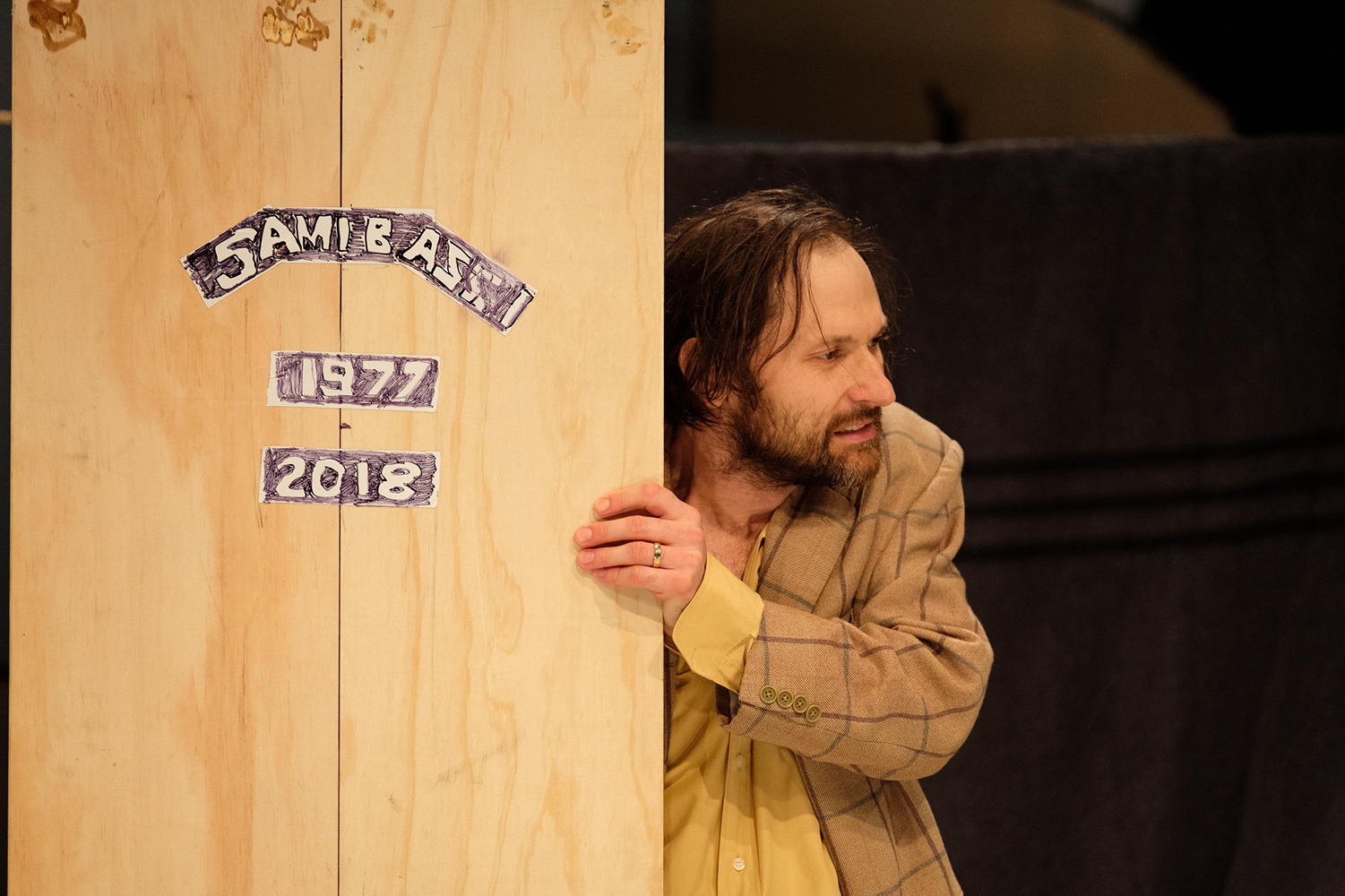 Sami in Paradise takes Nikolai Erdman’s comedy The Suicide – written in late 1920s Stalinist Russia – and turns it into a laugh-out-loud tragedy of refugee life. The Suicide was a subversive work that led to Erdman’s exile. The play explored a doublethink: while acknowledging the wretchedness of life one may cling to the pithy notion that ‘life is beautiful’.

When one character snaps at Semyon (Sami in the adaptation) “Citizen! … Life is beautiful,” Semyon replies, “I read about that in the newspapers, but I think they’ll print a retraction any day now.”

The question: how to live a dignified life in undignified conditions? Erdman’s The Suicide was a black comedy that laughed when only tears seemed appropriate.

In director Eamon Flack’s and company’s update, Sami in Paradise, we leave nondescript Russia for a nondescript refugee camp that we are assured is not Manus or Nauru. Here, Sami (joyously rendered by Yalin Ozucelik) has lived for seven years in a makeshift tent with his wife (Victoria Haralabidou) and mother in law (Paula Arundell).

Sami’s condition is more extreme than Semyon’s. While Semyon reached the depths of despair at home, Sami is in a strange land – this despair goes all the way down.

It is Sami’s dream of learning to play the tuba that keeps him going. Nevertheless, everyone is, despite his objections, quite convinced he wants to kill himself. When Sami realises his tuba-dream is in vain he agrees that suicide is, indeed, the way to go. 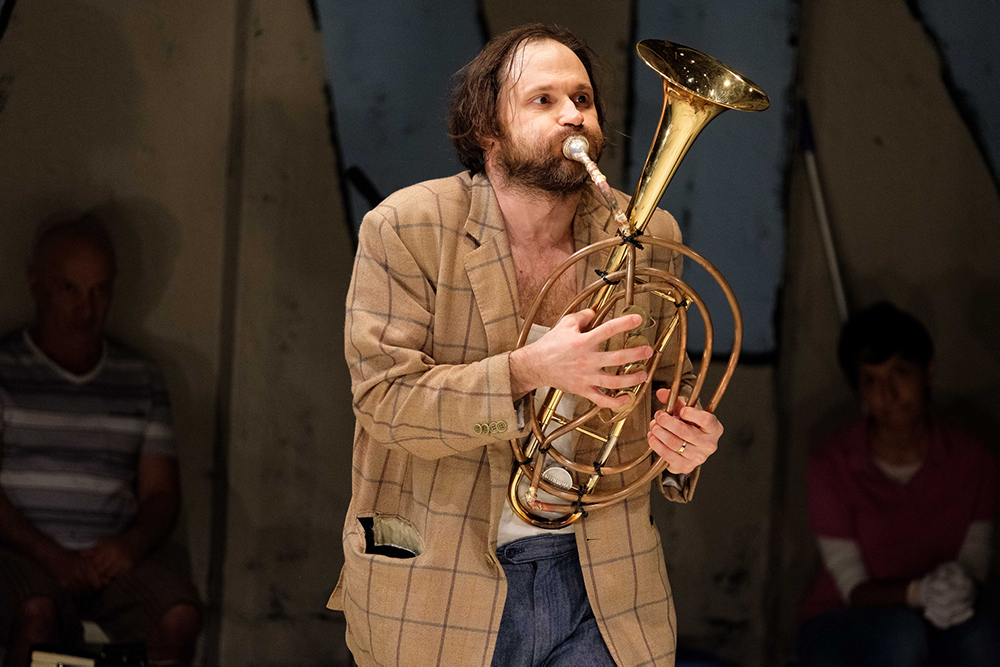 Others are quick to try and convince him to commit suicide in the name of their various causes – private aid, sex work, a butcher’s business, girls’ education, art, faith, love and freedom. Each finds in Sami a chance to make the world listen to their woes.

So, for Sami, suicide becomes a reason to live. He becomes a clown martyr – a parody of Christ. While Christ’s message was one of universal love, Sami-the-Clown-Martyr’s is specific to the profound but selfish plights of his fellow campers.

An insight of the play is that these plights pale in comparison to an individual’s will to live. As Sami tells us, his soul is a caged bird and, to quote Dunbar’s Sympathy, when the caged bird

beats his bars and he would be free;
It is not a carol of joy or glee,
But a prayer that he sends from his heart’s deep core.

Out of Sami’s deep core we hear a deranged prayer from someone who has been given no hope and so must make his own.

In this way, the play is bleak and uplifting. It is bleak because it supports the idea that faith in progress is unfounded. Uplifting because while we may not be able to see utopia on the horizon we can come face-to-face with each other – to sympathise, recognise, love and hope. We must hope for better but engage with the now. The absurd clown world of Sami in Paradise makes this clear. 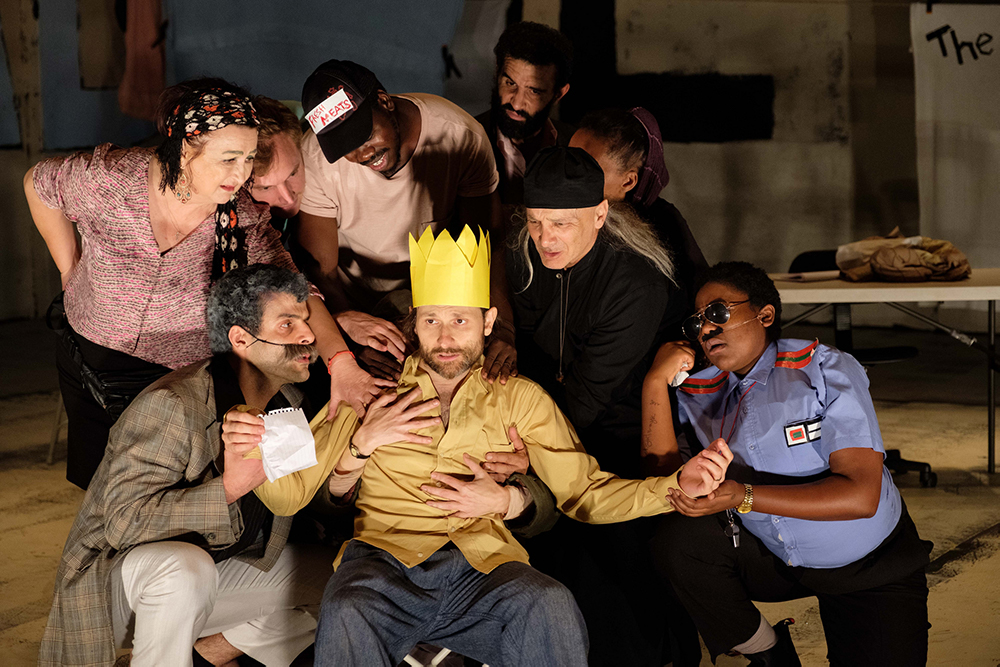 This may be why the production has had a mixed response. Some critics have praised the clowning of human misery, others found it distasteful, claiming it is racist in its stereotypes, takes cheap shots at NGOs, and is misogynistic. These claims – which I find unconvincing – show why the work is important not only as a protest for those living under the status ‘refugee’ but also to question the legacy and potentially utopian ideals of political correctness. If a production ‘bigs up’ racial stereotypes it does not follow that it reinforces them. A show does not make a claim or have an opinion – characters do. A role of theatre is to investigate such things as the line between culture and stereotype.

Other critics have noted that the piece is curiously moderate given the subversiveness of the original. What would a subversive work about refugees look like? Perhaps Peter Dutton doing something outrageous with a pig?

At its best, the show is subtly subversive because it damns both the political right’s callousness and – perhaps against its intentions – the left’s moral righteousness. A callousness that treats the refugee as a problem and not a person and a righteousness that does not recognise the overwhelming and perhaps impossible task of governments safe housing or settling the heartbreaking and incomprehensible numbers of displaced persons in the world.

Sami in Paradise is hopeful that sympathy will sweep away callousness and moral righteousness. Sympathy requires us to acknowledge not just the good, but also the bad, ugly and ridiculousness in others, and in turn, ourselves. It demands that we listen to our hearts and that we recognise the reality of the situation so as to bring real and practical change.

This hopefulness is highlighted by Eamon Flack’s direction that ensures we are engaged both directly and indirectly by the ensemble, allowing us the space to laugh at and cry for Sami’s world. It is petered by Dale Ferguson’s purgatorial set – a large concrete warehouse-esque space, lit in a stripped back fashion by Verity Hampson and filled with the upbeat and mellifluous score of Jethro Woodward, with musicians Mahan Ghobadi and Hamed Sadeghi.

And the actors, of course, bring hope to the work through their sheer joy. In addition to Sami’s family, the large cast includes Fayssal Bazzi, Nancy Denis, Charlie Garber, Marta Kaczmarek, Mandela Mathia, Arky Michael, Hazem Shammas, and Vaishnavi Suryaprakash. While one might sense an inexperience in some members and expect tighter ensemble work and more biting, self-assured clowning, none of their faults are fatal, and the joy wins out.

As for Sami, in the end he realises that in death he would not fly to paradise but that he is already there and that paradise in this life is bleak, but beautiful.

At a time in which our immigration minister has said he would support fast track visas for white South African farmers, this is important theatre.

Post show I would recommend the film The Death of Stalin and Dostoevsky’s short story The Dream of a Ridiculous Man.

Into the Wild Artistic Director Eamon Flack’s vision for Belvoir
by Mark Mordue
Australia is such a knotty, pent-up, uptight society. Any way we have to release those things we should go for.
Full Article
Culture
Theatre

Leaving the Panic Room ‘Hir’ at Belvoir Street Theatre
by Jonno Revanche
"It's not an easy play, it's a problematic play,” says Williams. “And it’s not a PC play."
Full Article
X