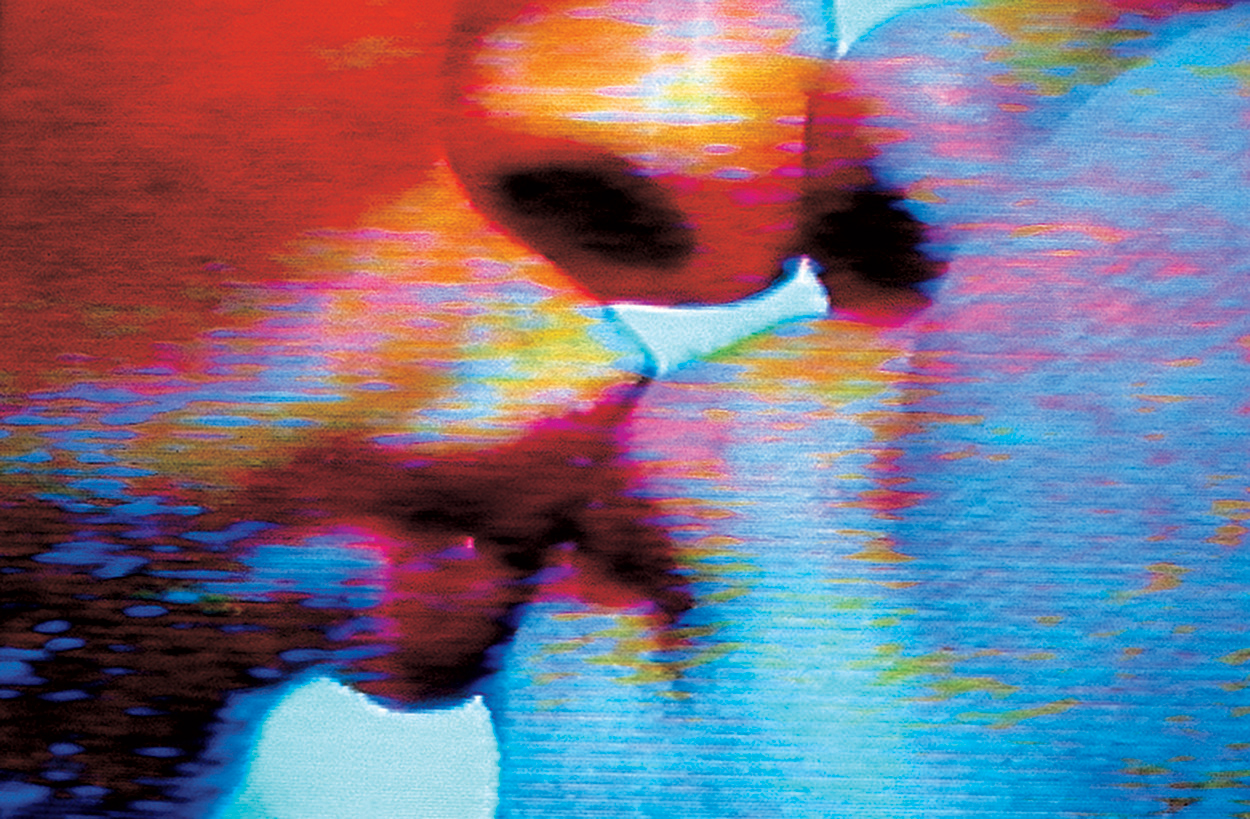 It only happens occasionally that a work of art truly confronts you. One such experience for me was seeing Ever Is Over All (1997) by the Swiss artist Pipilotti Rist.

It’s a two screen video projection – on the right-hand side of the screen are shots of red flowers in bloom in a bright green field; on the left-hand side a woman in a bright turquoise dress is seen walking down a city street. As the woman walks in slow motion she carries a long-stemmed flower, not yet in bloom, swinging it side to side.

Then the coup de grâce – the plant’s hard, bulbous head is used to smash the side windows on cars parked in the street. The woman’s expression is pure joy in the face of anarchistic destruction.

A female cop is seen walking up from behind. But instead of arresting the window smasher, she gives her a warm smile and a salute. All of this is accompanied by a languorous soundtrack of a woman’s voice humming over slowed down beats.

This seemed to me to be one of the most preposterous works of art I had ever seen. I told friends about it, wrote about it, laughed at its memory. Back then, I wanted art to say something, and say it clearly. Perhaps I had grown cynical along the way from art school to becoming a nascent critic, but Rist’s work was just too much, too over the top.

Yet I never forgot Ever Is Over All either. It troubled me that I couldn’t resolve the work in a rational way, and in the 20 years since my first exposure to her work I began to treasure the memory of that initial surprise. I thought about the early 20th century modernist art that I had seen in my high school art textbooks and remembered how the ‘shock of the new’ is a real thing – an aesthetic shock that can take years to understand.

Rist’s Mercy Garden Retour Skin, a major installation piece that was included in the Biennale of Sydney in 2014, was a turning point for me in appreciating her work. She had initially made a career in Europe and the US with single screen video works that could be shown on a TV screen or projected in a gallery space. But she began to make larger and larger installations, and Mercy Garden Retour Skin, with its vast multiscreen projections of the sea with human bodies and light awash in the cosmos, had to be viewed from the floor where soft carpet and cushions were laid out. Seeing this piece was akin to graduating from watching an old TV in your lounge room to your first IMAX movie experience with full surround sound. 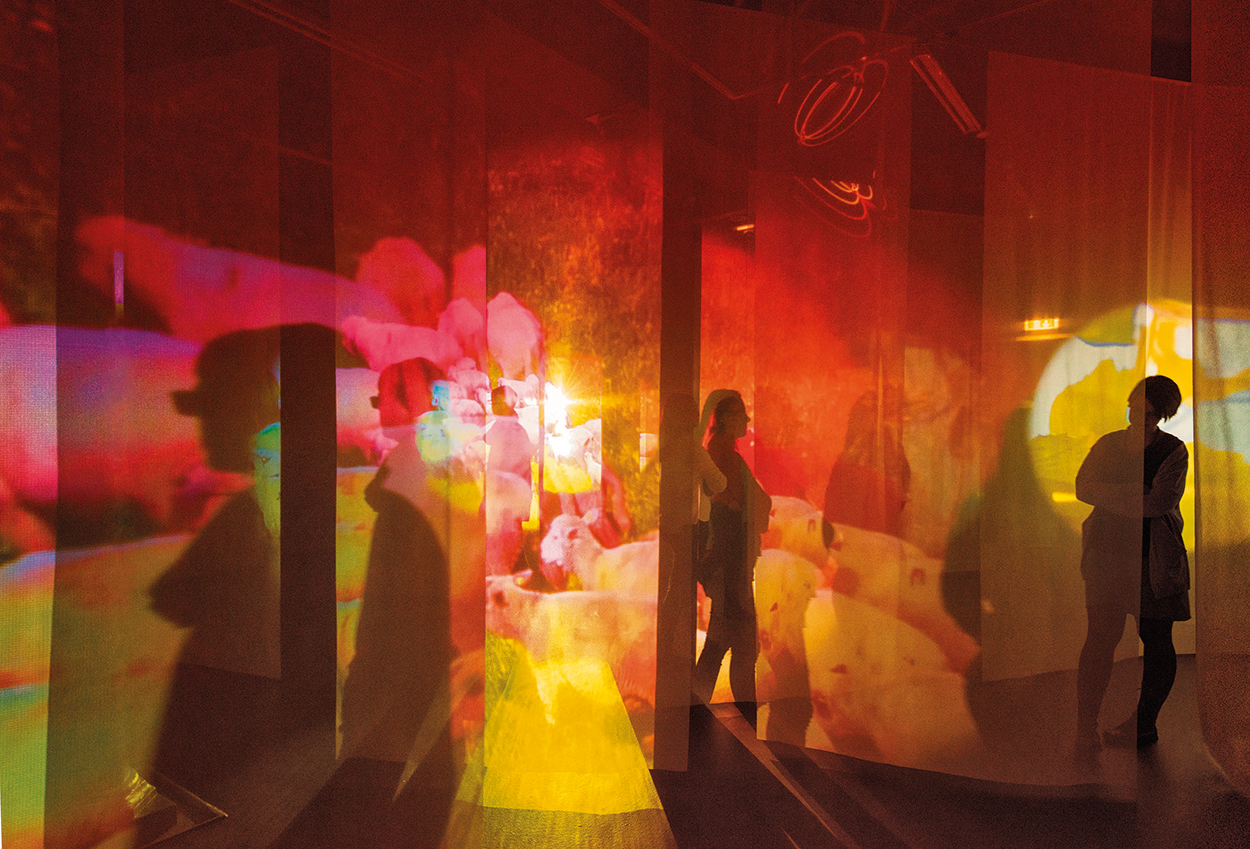 All this came back to me when walking through Sip My Ocean, a massive and intricate career survey exhibition at the Museum of Contemporary Art (until 18th February, 2017).

To say that Sip My Ocean is an ‘experience’ is an understatement – it’s a full on sensory engagement for the eyes and mind, an ecstatic, hysterical and joyful plunge into Rist’s imaginative universe. Visitors to the MCA’s Level 3 go on a walking adventure tour through a series of rooms, passageways and small niches, where images of space, animals in the field, naked bodies, plants, water and much more are projected onto walls, floors, furniture, even on to bottles of gin, while an entire gallery has been turned into a forest of hanging lights that produces an exquisite experience of light and sound. The exhibition has a soundtrack too – a rendition of Chris Isaak’s ‘Wicked Game’, performed by a crooning female voice, while a backing track screams out the lyrics.

There are no wall texts and no labels in the galleries, and although there is a room map and a doorstop catalogue, this is not an exhibition about reading, or even about consciously knowing what something is supposed to be ‘about’.

Rist is interested in the experience of vision. She refers to the sun as a giant projector and to our eyes as a kind of sensory recording device. Colour is paramount in her work and features hard blues and greens, often overloaded with filters and solarisation, and points of silver light in darkness like star fields recur in a number of the installations. Where much contemporary video art is about HD clarity, Rist embraces the grain of pixelated images, the play of moving pictures on a variety of surfaces.

There’s a lot of nudity in the works – the human body, naked and unabashed, is shown free of the male gaze: a flaccid penis is seen here and there, like an underwater sea slug, and female nipples float by. The body in Rist’s work is a vessel for existence, not a sexualised identity.

There are dramatic reversals of scale too – in one Baroque installation overflowing with furniture, objects and wall projections, there is a tiny light emanating from the carpet. If you get down on your hands and knees, you will see under the floor a tiny woman, her arms outstretched, either screaming in joy, or for help.

I tried using the room map to work out what I was looking at but in the end just gave in to the thrill of it all. 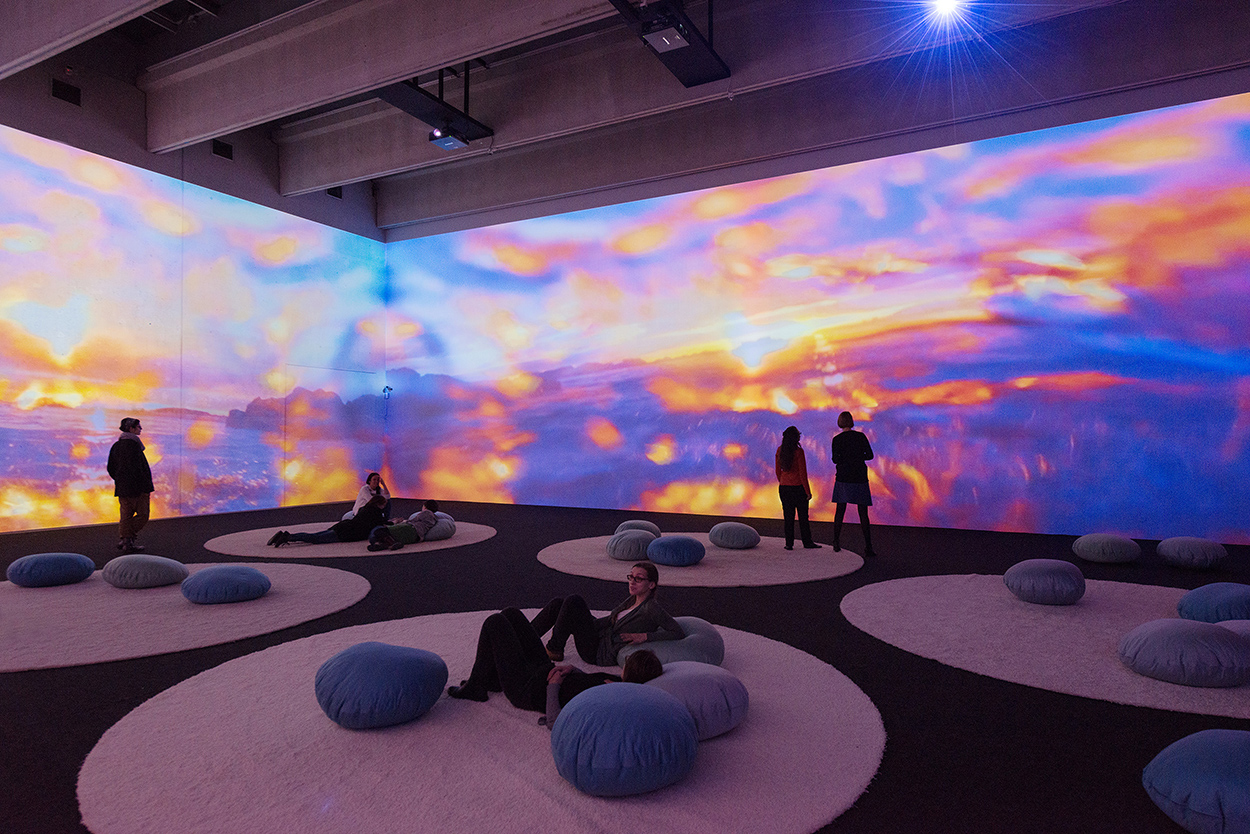 Without the context of Rist’s other work, I had misread the apparent absurdity of Ever Is Over All as an accident, not an intent.

In Sip My Ocean, we have the opportunity to see all Rist’s art as an ongoing, overflowing and interconnected practice. More than anything else, Rist’s work is about transcendence over the rational. It enters into a state of being that might be called hysterical, but is instead a resistance to the normalising view of everyday existence.

The effect of a work – not its ‘message’ – is probably more valuable in art than anything else, I came to realise. Sure, we can appreciate art that is ‘about’ something, but often vitality is sacrificed for so-called seriousness. There is a joyous kind of feminism here, one that is implicit in the all-encompassing world view of the artist, a sensual and slightly crazy aesthetic of excess. Sip My Ocean is both intentionally funny, and often profound.

Rist’s art doesn’t really need explaining – it simply is, and must be experienced in real life. That her work offers this depth of experience and such an exhilarating sense of the strange is a testament, not to a solipsistic view of the world, but to one that is open to every possibility. 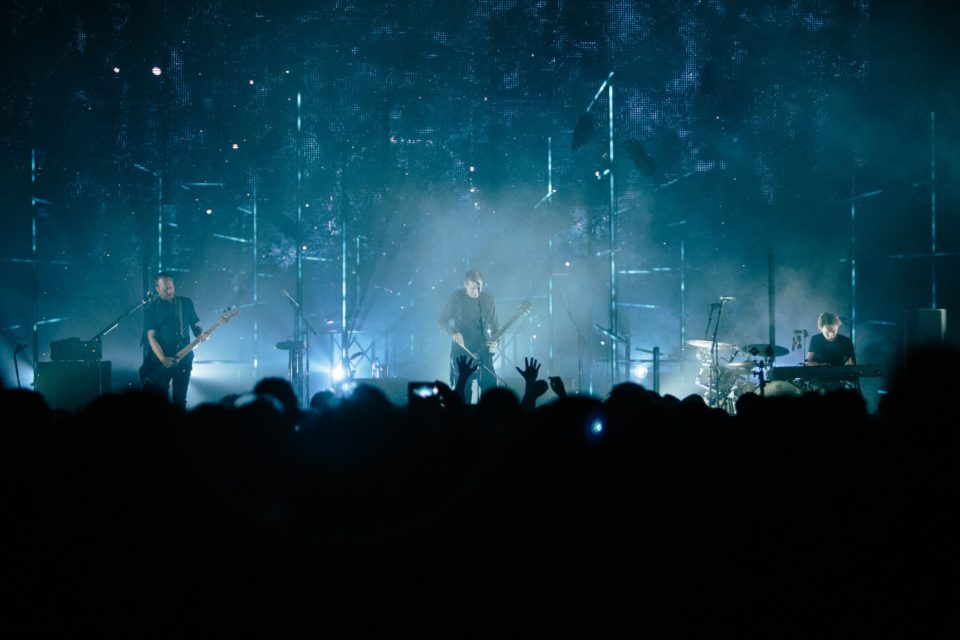 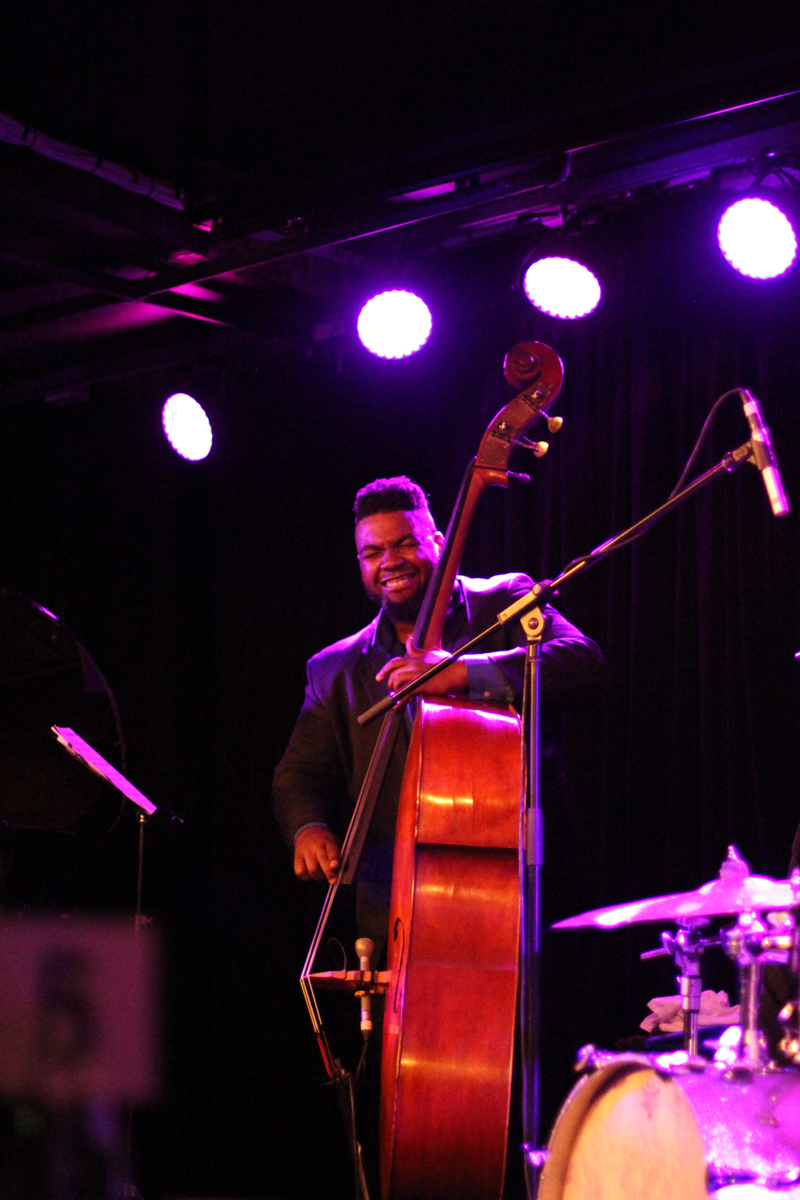