A Ghost Story Taking the life-and-death pulse of separation 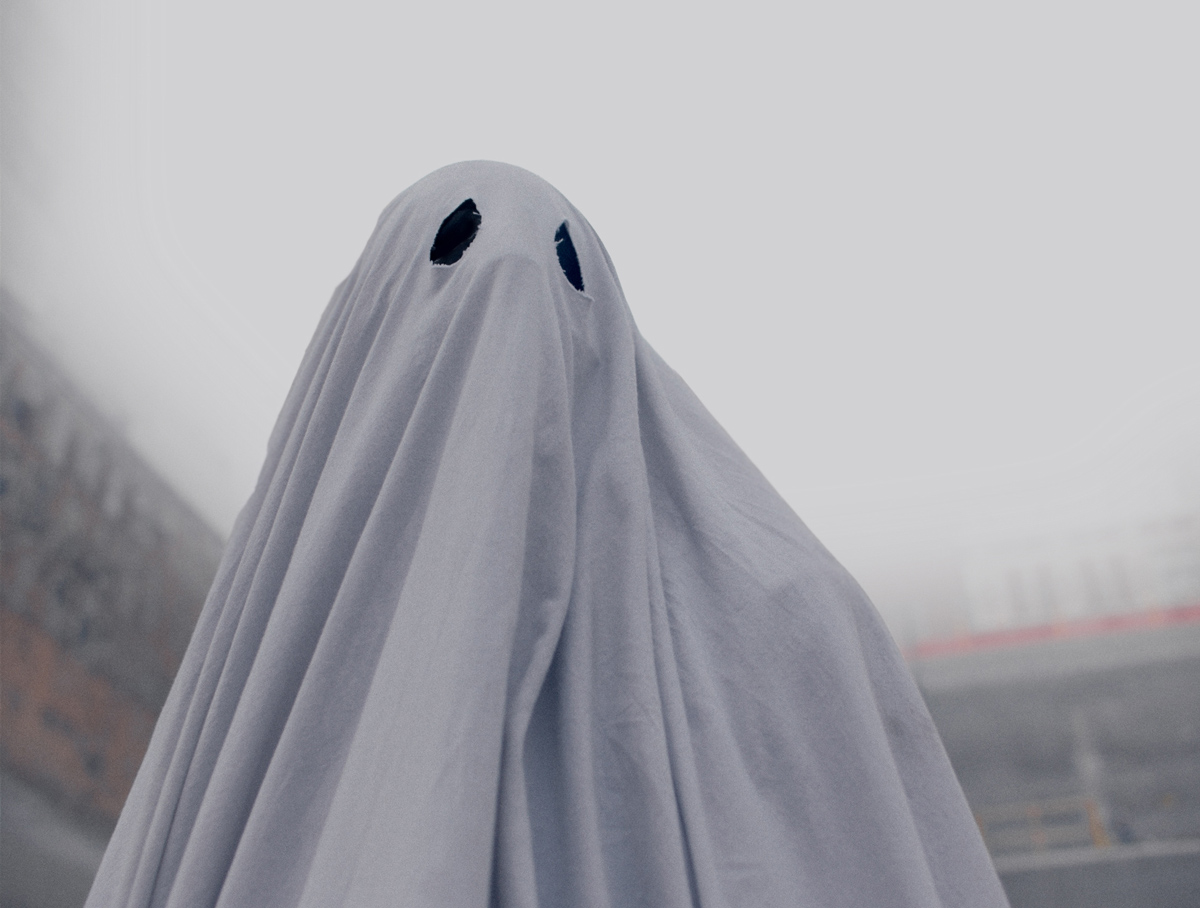 A young woman, M (Rooney Mara), is standing over her the body of her partner, C (Casey Affleck), in a hospital. We look on through a wide, static shot, from several metres away, as she asks a nurse for a minute alone with the corpse. It’s the last time we see his face.

M peers on and on and on, before pulling the white sheet back over her love’s face with great care. She walks out of the cold, blue room, but we linger. A minute or two later, C sits up straight, the white sheet engulfing him. He’s neither alive nor dead.

I’ve seen the film twice; in both screenings, some viewers greeted C’s awakening with nervous sniggers, while others intuitively accepted the premise. More than most films, indie US director David Lowery’s A Ghost Story works on gut instinct: you either get its highly constructed logic or you don’t.

Next time we see C front-on, he has black eye-holes: this child-like design decision imbues C with real personality, and he watches the world in which he’s woken like an observant, wordless puppy. He’s lonely. In another wide shot, looking down on earth, we see him slowly moving across a field, and we can sense where he’s going; he wants to be home, and returns there instinctively.

From this point, M fades away as a character, and we see the world through C’s cut-out eyes. This is a ghost story, but it’s his story, and it’s not a horror film. ‘A Ghost Story’ presents other possibilities of existence. Image: supplied.

This may sound like an indie gimmick — a film told from the viewpoint of a ghost that appears like a child’s homemade Halloween costume. After all, there are only a handful of films about ghosts that aren’t horror stories, most of them being American comedies or fantastical action films or schmaltzy dramas about the afterlife.

There’s Ghost, of course, which uses death as the device to separate its in-love protagonists and delay their rightful reconciliation. There’s films like Ghostbusters and Scrooged and Beetlejuice with action elements dispersed throughout. There’s the ghost of Obi-Wan Kenobi who returns in several Star Wars films to deliver nuggets of wisdom and nudge the plot along. And there are self-serious dramas like The Lovely Bones, Hereafter and What Dreams May Come where people must reconcile their lives after their deaths, or where loved ones must find each other in place before heaven.

A Ghost Story is getting at something different. It’s one of the very few dramas in the English language that takes a ghost as its subject matter and its central character. It isn’t about demons or malevolence, and its central tone isn’t dread or fear, but loneliness and wonder, as C feels the pulse of separation from his partner.

It reminded me very much of the films of Japan’s Studio Ghibli, where children slip into strange realms of spirits. The apparitions in My Neighbor Totoro (1988) are fantastical rather than demonic; they crave contact with the material world and constantly reach out to befriend the child protagonist. In Spirited Away (2001), a gust of leaves takes a girl into a supernatural world, in which some spirits are monstrous and others are kind — they’re like people in other words, various in their dispositions.

In A Ghost Story, C has his own moods and motivations, too: he gets jealous, enraged, despondent. At moments, he holds the usual powers of a poltergiest, flickering the lights in anger when M brings a man home, shattering plates when she moves out and a new family arrives.

When subsequent tenants hold a house party, there’s the suggestion that they’re listening to C’s music: that his art has outlived him. And then time begins to slip further. The house is empty, it decays, is demolished, leaving C standing in the rubble. The space shifts into the vertical as high-rise apartments spring up, and then horizontally into a shimmering, electrified city grid.

Cinema isn’t like language: it doesn’t have tenses to refer to the past or present. Instead, filmmakers have built their own visual grammar to signal to viewers when a time signature has shifted. Flashbacks or flashforwards, for example, are often in more muted or more saturated tones, with the frame’s perimeter gently blurred. A Ghost Story uses few of these conventions to tell us when we’ve slipped forwards or backwards in time. When C leaps from his desolate skyscraper, he is thrown to a colonial period in which a pioneer stakes his own claim on the land. To my knowledge, this is one of the few Western films that has a cyclical vision of time: its structure is a loop in which time moves and it doesn’t. It’s a kind of a secular exploration of a limbo state in which there’s no afterlife or beforelife – rather, C is stuck in a moment outside time: he is there in the future and there in the past. Cinema is all about time and how to pass it on screen: how strange, then, that English-language filmmakers have only explored such a tiny sliver of time’s gradations.

In German cinema, Wim Wenders has created works in which non-human entities experience a world in which things change and they don’t, Wings of Desire being, perhaps, the most famous and beautiful. He has described places as things that have memories “like sand dunes, wandering on and on”.

The films of Andrei Tarkovsky are similar in that they are not religious, but have spiritual dimensions in their suggestion that time can slide around and other types of beings can possess sentience (the ocean on the planet of Solaris). And more recently, Thai filmmaker Apichatpong Weerasethakul, who says that his country runs on superstition, has made lyrical tales where reincarnation and visiting spirits are given the same storytelling treatment as the earthly subject matter; where drama and magical realism bleed into one.

In Western cinema, few ghost stories imagine the world of spirits beyond a single haunted house (which is invariably a motif of terror and entrapment, experienced from the viewpoint of a frightened human). But when C looks out the window, he sees a kindred creature enrobed in a floral sheet, staring back from next door. They speak in subtitles: “I’m waiting for someone,” says his neighbour. “Who?” “I don’t remember.”

Moments of absence are scattered throughout: we linger on doorframes long after characters have left the shot, or windows before they’ve entered, we cut away from domestic scenes to galaxies of stars. A motif recurs in which C, centred in the square cinematic frame, is engulfed with smoke or mist, while at other times, his presence is marked by light dancing in rainbows across the walls of his home.

My mum remarked, after the screening I took her to, that after you die “you think you’re either going to be tortured or it’ll be like heaven. But this makes you sort of feel for ghosts. They have needs too!”

This made me laugh — the heaven-or-hell hallmarks of her Catholic upbringing, fused with a modern-day therapy mindset of emotional needs — but I think she was right: A Ghost Story presents other possibilities of existence. Ghosts don’t have to carry scythes or rattle chains or go “wooooooooo”, they don’t have to stand as metaphors for the past, as in literature, but can be full characters in their own right.

I feel real love for this film and its lost wandering creature. It is a film of things passing, of having nothing to fit into, of men leaving, of an open voyage, of doors opening, of sunlight illuminating dust as it falls diagonally through a window — of ghosts wandering on and on who just want to say hello.

A Ghost Story – Taking the life-and-death pulse of separation

Lost in Space ‘9 Hours Underground’ at Wilson Parking, Sydney Opera House
by Andrew Frost
In the event of apocalypse, what would this selection of art tell the future about who we were?
Full Article
Culture
Books

Marginalia Shaun Prescott’s ‘The Town’
by Alex Tighe
“The people in the town lived as if they would never die, but they were not heroic or foolish like in books and music. They were only there.”
Full Article
X