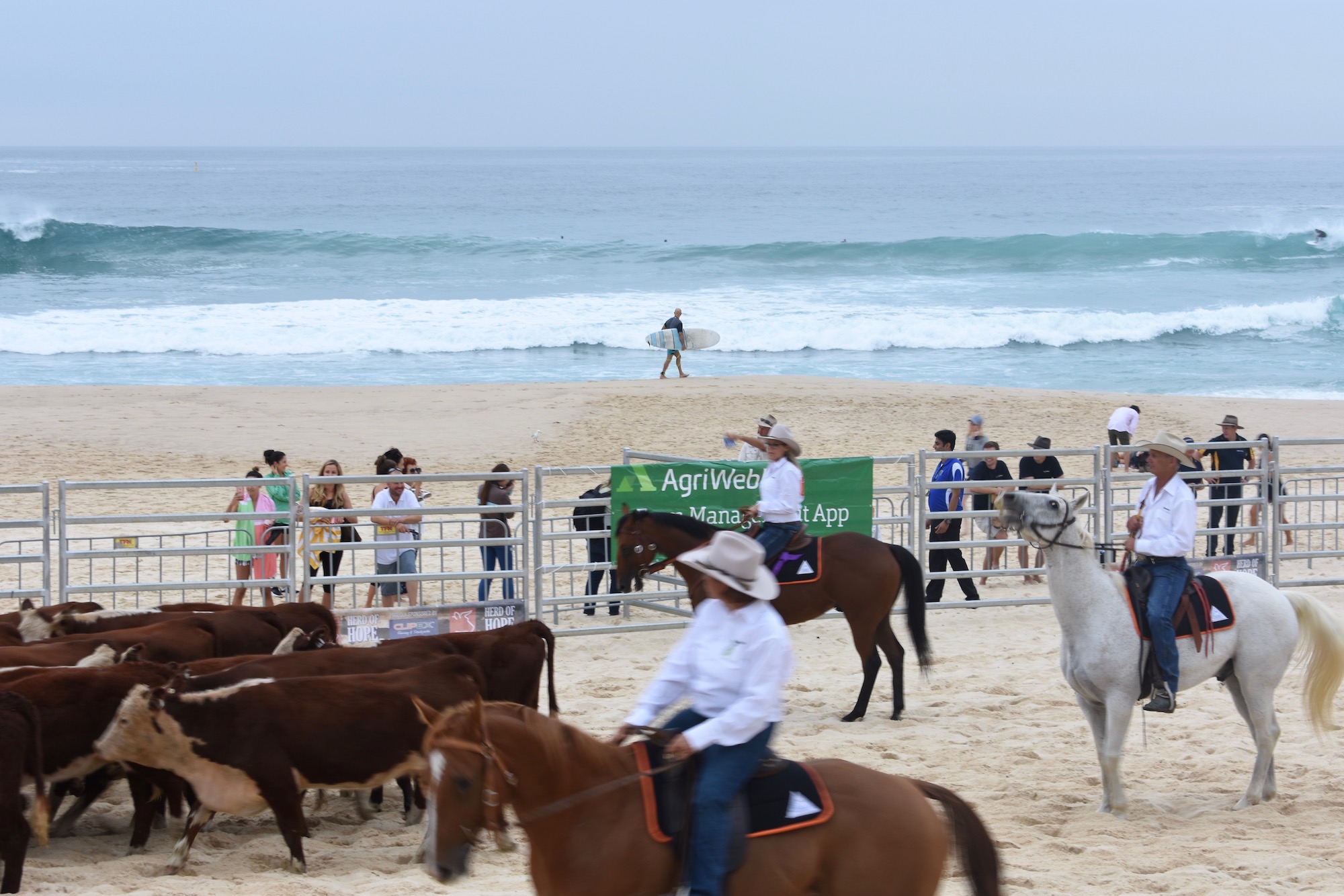 "The connection between a cattle drive and organ transplants is a bit ambiguous, but I think I get it." Bondi Beach. Photography by Alex Tighe
Text: Alex Tighe Facebook Twitter Email

When I arrive at Bondi Beach before sunrise, a B-double cattle truck is reversing along the promenade. Access to the Icebergs end of the beach is blocked off, and a security guards turns away several fluoro joggers and a skinny guy with a surfboard. As the light rises, people in white polo shirts sift through the gathering crowd, explaining what’s happening: the cows, they say, are from Unoodlya Station in the Northern Territory, near Alice Springs. From the cattle station they took the long route here, the scenic route – via the Barossa Valley, with a stop at Mulgoa in rural New South Wales.

The cows aren’t meant to be here, on Bondi Beach. They’re meant to be on the Harbour Bridge – that was Megan McLoughlin’s original plan anyway. McLoughlin is a double-transplant recipient from outback South Australia, who was weeks away from death when her transplant (a kidney and pancreas) finally came through. As the white-shirted volunteers explain, a few years later McLoughlin had the idea to drove a herd of cattle to Sydney, to raise awareness of Australia’s fatal need for organ donation, and of the difficulties country people face in accessing medical care.

The Bridge plan was knocked back, for obvious reasons. McLoughlin and the team behind her ‘Herd of Hope’, as it became known, quickly settled on the alternative location of Bondi. I’m from the country myself, and I can imagine the scene: some excited country folk gathered around a Lonely Planet guide to Sydney, and then, after being told the Bridge was off, going back to the guide to find the next biggest landmark.

The connection between cattle and transplants is a bit ambiguous, but I think I get it. When we were kids, my brother had to see a specialist every six months to keep him alive, so my first memories of Sydney are of the long car rides and motion sickness, the faulty boom gate at the Best Western, and the huge atrium of Westmead Children’s Hospital with its crazy benches and bright artworks. As we got older our parents wanted all of us to have braces, so every few weeks we’d drive the 150 kilometres to Dubbo to sit in the orthodontist’s chair for 20 minutes. When my appendix began to swell at school one day my dad picked me up and we drove the familiar Dubbo route (much faster than the orthodontist trips).

My mum, she’s never had good kidneys, and a while back the doctor in town recommended that she see a specialist regularly – so to Dubbo again, and again, and again. As you read this a thousand Holdens are on the long highway to Dubbo, or Griffith, or Alice Springs or Townsville or Broome, to wherever has a decent hospital or a hospital at all, for a broken bone or for chemo or to give birth or to have dialysis or hear the news that their transplant has fallen through last minute, again, and they’ll have to come back another time. The cows arriving at Bondi travelled roughly 3,000 kilometres from the Northern Territory to be here on the beach, which sounds like a long way until you realise that’s only ten trips back and forth from Dubbo.

When the sun is low over the breakers the first cow is pushed out of the truck and onto the promenade. The others follow, and together they look out towards the ocean. (I remember my first time too, little cows: How can there be so much water?) They’re pushed down the ramp and into a fenced-off area on the sand, where half-a-dozen stockmen and -women are waiting.

McLoughlin is on one of the horses. On another is her father, Jim Willoughby, who is telling the crowd that almost all of the drovers today are alive thanks to organ donation: David got a new kidney from his sister; Steve had a heart transplant from a deceased donor. There’s a big divide between the bush and the city, Willoughby is saying. “Once upon a time everybody in the city knew somebody who lived on a farm. Now it’d be one in a thousand.” McLoughlin takes the microphone: “Illness doesn’t care where you live.”

The crowd presses over the promenade’s railing as the cows are herded up and down the sand. A little girl in a Ripcurl wetsuit points. “That one’s pooping!” she yells.

After the event is over I take two buses to Royal Prince Alfred, where my mum is halfway through today’s dialysis. Her Dubbo specialist diagnosed kidney failure in November last year, and she has been on the machine since. Rather than shuffling between home and Dubbo three times a week, Mum is staying in Sydney with relatives and with her children – shuffling, instead, between houses, because she’s worried about becoming a burden.

On the beach the survivors put on a sausage sizzle after the droving, and the white-shirts mingled with the public. There’s a community here at the dialysis unit too, although the mood is opposite. Dialysis is a regular thing, so the people who have been coming for a while are used to seeing each other at the same time each week, and they talk haltingly in the waiting room. “Have a good dialysis,” a man with a walking cane says to his friend. One woman, a carer, has been bringing her father to dialysis for years, and is in the habit of helping the nurses take tea and cheese sandwiches to the chair-bound patients. 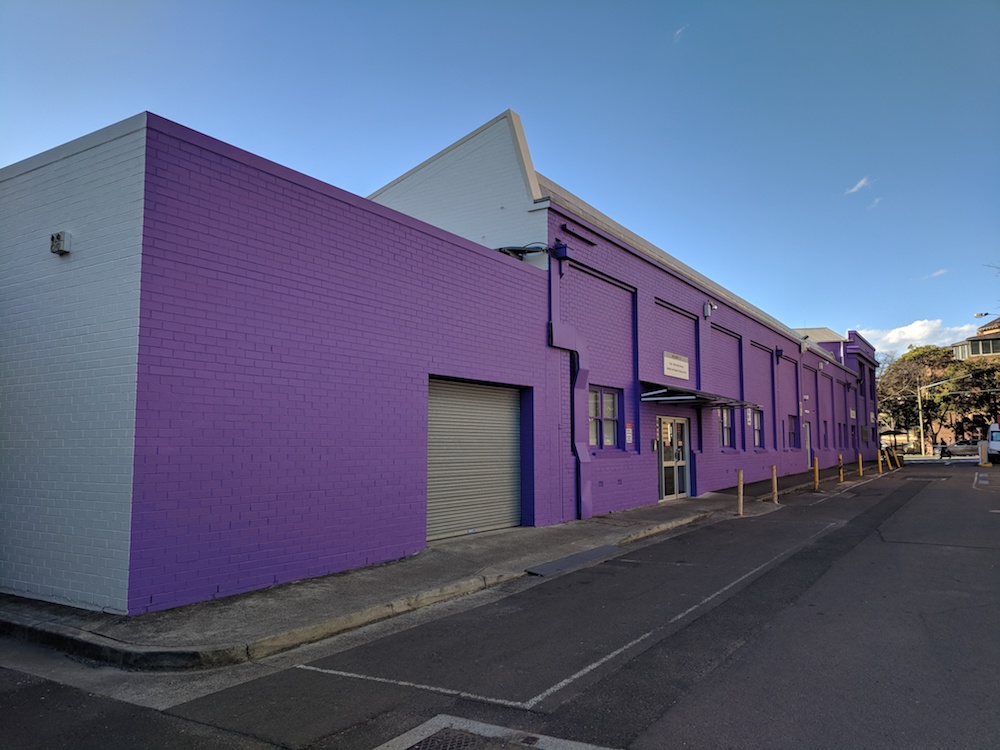 The outside of the dialysis unit at Royal Prince Alfred Hospital

The dialysis room is gothic – the ceiling low, the long room filled with bodies in chairs, the bodies covered with white sheets. Two tubes connect each sheeted figure to a machine. The tubes are filled with bright red blood. I hate the fact that the dialysis machines are shaped like upright coffins. Dialysis is not a permanent solution, and if you stay on it too long your health will deteriorate.

I’m told that in Spain, where they have an opt-out system of organ donation (rather than the opt-in system of Australia), dialysis is almost obsolete. Peter Singer has made the argument that people should donate their kidneys to strangers, since the risk to the donor is so low and the benefit to the recipient so high. Or else, Singer has argued, the Australian government could incentivise donations, with financial incentives for donors who give their kidneys while still alive, or by paying for the funeral expenses for deceased donors.

The panel on my mum’s machine tells us that the tubes have taken out 7.9% of her blood. On the front of her machine is a white circle of plastic, and every time it makes a full rotation the tubes jolt, at approximately the rate of a heartbeat. It brings to mind a quote I heard recently – that loving somebody is like holding your heart outside of your body.

There must be thirty chairs in here, all full. In Australia there are around 12,000 dialysis patients, although only 1,400 of those cases are considered urgent enough to be placed on the waiting list for a transplant. Last year only 510 deceased donations were made. Before an organ donation proceeds, the families of the deceased are asked to confirm donation, and of the 1,093 cases where donation was possible only 642 were agreed to – a dismal rate of 59 per cent (132 agreed-to donations did not occur for various medical reasons). 451 possible donations did not go ahead.

It takes about 14 seconds and a Medicare card to officially register to be an organ donor. Willing donors are encouraged to talk to their families, to make sure that their wish to donate is known and respected. 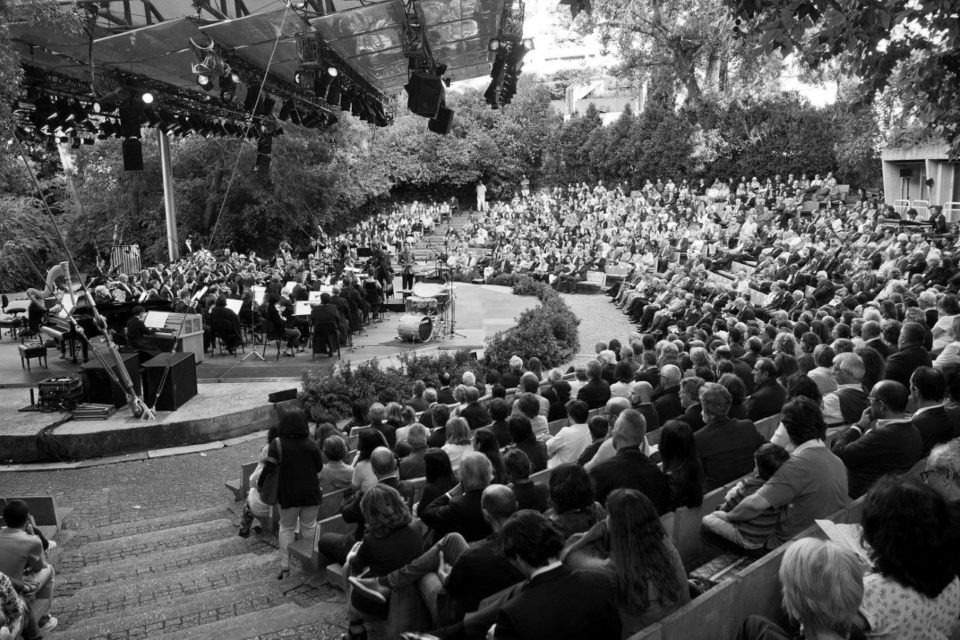 Shelter from the Storm Two Australians win international accolades for their work with refugees and the law
by Alex Tighe
“This kind of international recognition is a real wake-up call for people in Australia."
Full Article
Culture

Walking Home A Letter from London
by Will Self
The city seems to be both rapidly reconfiguring, and moving somewhere – although where I’m not entirely sure.
Full Article
X