2018: A Space Odyssey How Sydney artists are re-entering the inner city

What do you do when gentrification and a property boom have pushed your city’s edgy arts community literally to the edge? Sue the real estate agent who promised you were buying into ‘cosmopolitan living’? At least one organisation is working hard to find innovative ways for artists and performers to remain part of a diverse urban environment. Local government is on board and, surprisingly, even the big developers are into it.

Brand X is a not-for-profit organisation that’s been working for just over a decade to transform underutilised properties, and establish new spaces, for Sydney artists. A current project is on a humble corner in Darlinghurst with a paradoxically rich history.

The East Sydney Community and Arts Centre (ESCAC) might sound like it’s a dismal hall that hosts Twelve Step group meetings and Wednesday night macramé classes, but it’s actually a slick, environmentally sustainable, purpose-built rehearsal, exhibition and performance space. It provides a home for performers and artists, as well as a national and international launch pad for a mix of fringe, alternative, and counter culture works.

A gleaming $10 million redevelopment of the old Heffron Hall on Burton Street, ESCAC is all floor-to-ceiling windows and polished wooden floor, resembling a large, light and breezy yoga studio in a 5-star Balinese resort. It’s a convincing bricks and mortar demonstration of City of Sydney’s commitment to its Cultural Policy, Creative City, which maintains that “Artists and creative workers are essential to a dynamic, diverse and tolerant city, contributing wit, surprise and new perspectives to the urban landscape.”

Brand X is managing the space and overseeing a residency program called Flying Nun which enables new works to be developed, rehearsed and presented at the venue. James Winter is the Director of Brand X and co-ordinator of Flying Nun. He says having a space available for free allows time for ideas to develop more fully, and that a free, fully equipped performance venue makes alternative, independent productions more viable; something that is rarely the case in Sydney.

“We have a very monocultural program of theatre that hits the stages because they’re programmed to subscribers,” Winter says. “Subscribers have money so that’s why we have a lot of white content and middle class content. The problem is voices outside that cannot afford to have new work developed and presented on those stages, and it’s a risk to the house because it’s new.” 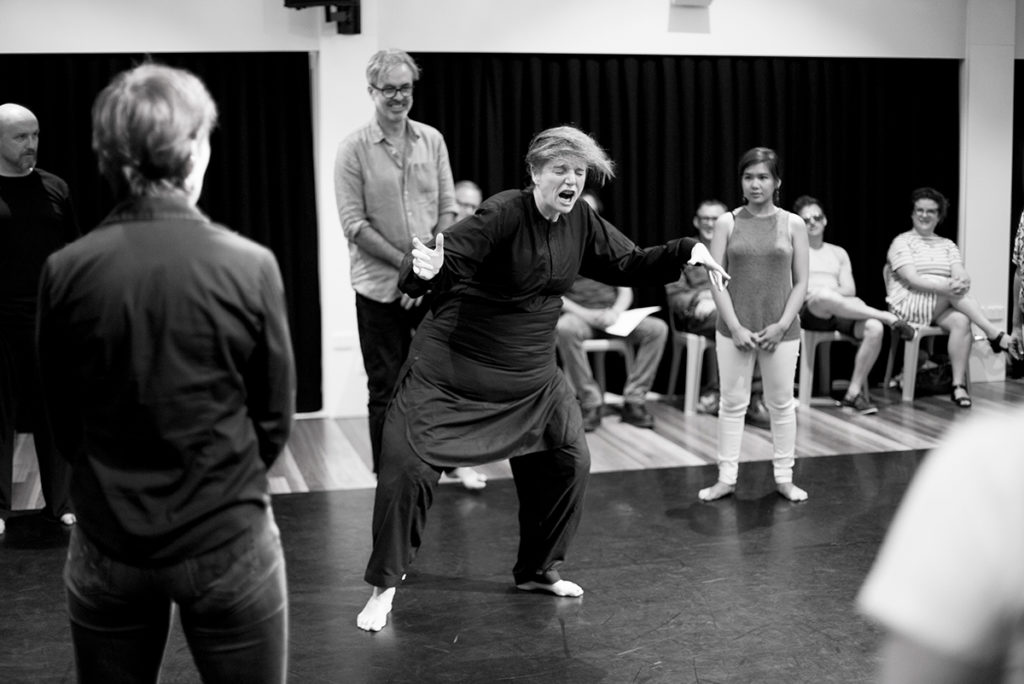 ESCAC isn’t necessarily the end of the line for works originating there. “We are able to create a stage for new work to go into development to feed in to the production cycle of Sydney’s performance scene,” says Winter. “Hopefully a producer or programmer will be in the venue and go ‘That would be brilliant in Edinburgh, in Perth, or Adelaide; actually that could be for our 2019 Griffin [Theatre] season.’”

The inaugural six-month season has offered up an eclectic mix which has ranged from a performative work called Gang of She that harnessed drag, disco, theatre and queer histories of decadence and dissent, to a fun, if cheeky (excuse the pun) show for children, The World According to Farts and Other Extraordinary Sounds of the Human Body.

Jaimie and Aspasia Leonarder, aka Jay Katz and Miss Death, have been presenting a series of ‘neo-vaudevillian’ variety nights featuring music, film and performances at ESCAC called The Experiment. “It is giving people not only a place to showcase their talent, but also possibly sell a few things and make some connections with people. I believe that great creative culture is about people meeting each other… At one of our performance evenings we had a lady from Los Angeles who’s doing a very similar thing and trying to set up networks worldwide.”

“The punters’ response has so far been positive,” says Leonarder. “It’s growing and [we just need] a few more venues like this and the MCA’s Art Bar, where people can go to consistently, and there’s somewhere that is a place for ‘the other’, the people who fall a little bit through the net.”

Brand X’s James Winter believes a diverse street is at least two-way, and he encourages the wider community to experience something new and unpredictable. “It might not be to your taste,” he says. “It might be strange and weird and something you don’t feel comfortable with; but it might change your life, or your views on society or yourself.”

While East Sydney Community and Arts Centre is City council owned, there’s a growing trend for private corporations to include creative spaces in major developments, something that’s less surprising once it’s understood they can trade it off for floor space concessions. Nevertheless, it’s part of a new contemporary urban reality. “It’s been a huge movement in Asia for many decades,” says Winter. “A lot of our performers had experiences in Beijing and Shanghai with rehearsal studios on the 17th floor of a residential building.”

Brand X had its origins in a relationship with Frasers Property, the developer of the former brewery site on Broadway. They teamed up again with Brand X taking over a whole floor of Central Park shopping mall and turned it into a cultural space so Frasers could attract a commercial tenant. Brand X is also working with global property developer, TWT, transforming commercial buildings in St Leonards into artist studios, rehearsal spaces, gallery and creative retail for a period before redevelopment. 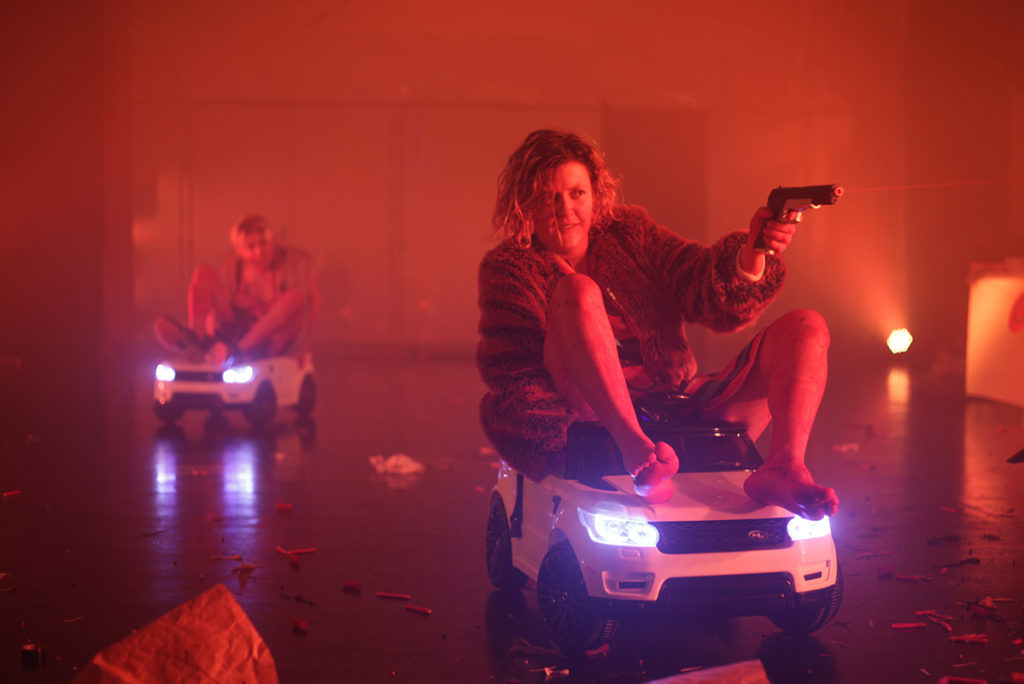 Meanwhile, the City of Sydney has secured the inclusion of a $25 million creative hub in what will be Sydney’s tallest residential tower development, by Greenland Australia, at the old Sydney Water site on Bathurst Street. Greenland will provide 25,000 square meters over 5 storeys for performance rehearsal rooms, film editing suites, and wet/dry studios for visual artists. There’ll also be a live/work apartment made available for a fellowship program. “The development came about as a result of a voluntary planning agreement,” the City says. “[It] granted Greenland floorspace concessions in exchange for public benefit.”

Winter concedes that artists being squeezed out of living and growing cities is an inevitable part of the gentrification cycle. “Even though that’s a grizzly thing to contemplate,” he says, “it is how cities evolve.”

The new East Sydney Community and Arts Centre is perhaps more intimately part of that evolution. The Flying Nun residency program is named in honour of Sisters of Charity nun, Carol Pedersen, who transformed the former Heffron Hall into a vibrant community centre for underprivileged locals. It was also used for two decades by the progressive Metropolitan Community Church.

“So many have called this place home, and they still exist.” Winter says. “The Gay & Lesbian Choir, Bell Shakespeare before they were a major company. Midnight Oil, and Mental As Anything played here. It’s an incredible responsibility. This is an emotional space. We must make sure we honour the spirits that are in the walls and how this community hold this venue very preciously.”

As well as respecting the past, Winter is cautiously optimistic about the future of ESCAC, and the ever-changing narrative of finding space for Sydney’s creative and cultural life. “This is something where you see raw ideas come to life,” he says. “If we can succeed we will have diversity of night time options in culture and entertainment that go way beyond Netflix and way beyond the pub.”

To find out more about Brand X and Flying Nun’s program of events at ESCAC go to www.brandx.org.au