A Bridge Too Far A Letter from Hong Kong 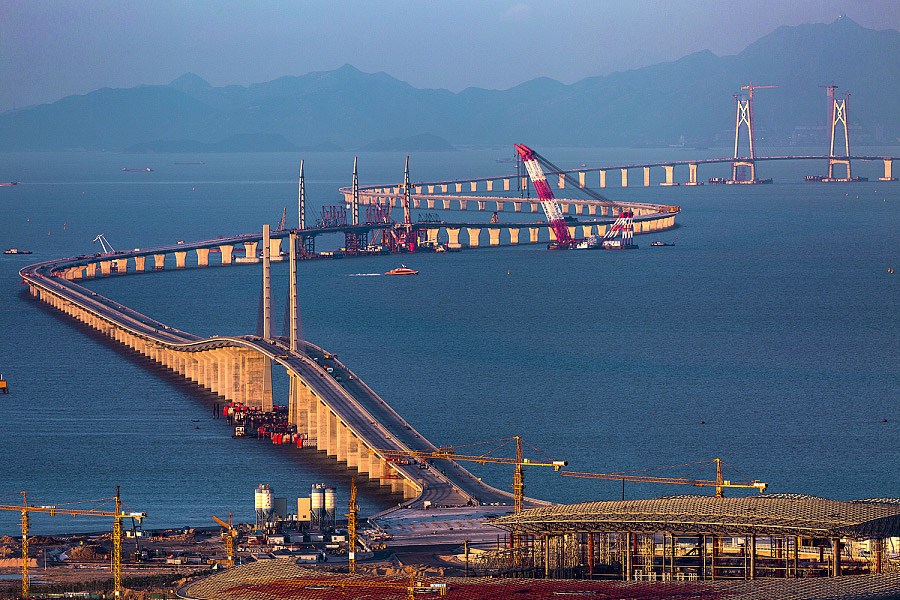 Late last year, a documentary I’m working on took me back to Hong Kong. I grew up here, and it’s changing fast – a fact that hit me when a friend suggested I visit a series of art installations titled Canton Express. The works came from the Pearl River Delta region (now, one of the most urbanised areas of China) and were showcased at the M+ Pavilion in West Kowloon, just a ferry ride across the harbour from Hong Kong’s CBD.

Both sides of the harbour are unrecognisable from my childhood Hong Kong. Although Caucasian, I ‘belonged’ until my early 20s – my cultural identity is infused with this place. Behind me, on Hong Kong Island, the skyscrapers of the city compete for space against a backdrop of rocky hills. The pink and faded yellow apartment blocks of Wan Chai stretch into the sky. In front of me, on the shore of Victoria Harbour, lies something that is now rare – a stretch of open land, laid with grass.

Entering the gallery space, I’m already expecting politically charged works from mainland Chinese artists. I walk into a room covered in photocopied pages of translated French literary works. This installation, created by Chen Tong and Lu Yi, is a reflection on the importance of independent booksellers and what they offer to Chinese culture.

I can’t help but think this ironic, considering the 2015 ‘disappearance’ of five staff members from Hong Kong’s Causeway Bay Books – an outlet known for selling politically sensitive literature. Months later the staff members ‘re-appeared’ in custody and the store’s founder released a statement saying he had been abducted – a violation of Hong Kong’s freedom of speech legislation which came into effect after the 1997 handover of Hong Kong to China from Britain.

I continue through the exhibition to find ‘Hotbed’ by Li Yinlin. One of his displayed videos depicts people playing tug-of-war with a rope made from cut-up pages of a book of Hong Kong’s basic law. The next artwork is a cage-like structure built from wire. Below it is a mound of gravel. The friend I am with, a Hong Kong-born-Chinese doctor, gives me his interpretation. “After the Cultural Revolution, China built hundreds of new cities in an attempt to move its rural people and urbanise the nation.” He explains that although these cities have been instrumental in improving the economic growth of the country and standard of living, “the rate of change is too fast. Many of these cities remain empty and hollow – we now call them ‘ghost cities’.”

There’s more than one ghost in this gallery. None of these artists have directly referenced one of the most obvious signals of change – the Hong Kong-Zhuhai-Macau bridge. This 15.9 billion dollar project, due to open soon, is huge in every way. It will open up economic opportunities for the region and will span 55 kilometres, physically linking Hong Kong to the mainland. And the moment it does, Hong Kong will become part of China – its ‘mother’ country – in a way it never has before. The cultural and psychological ramifications will be irreversible.

The Hong Kong I grew up in is changing, has changed. Its harbour is shrinking. Throughout the city, areas of land that were once green and open are stuffed with flashy buildings. The sounds of the city – once predominantly Cantonese – have change to Putonghua, the tongue of mainland China. My breath here is shorter, thickened with smog.

A Bridge Too Far – A Letter from Hong Kong